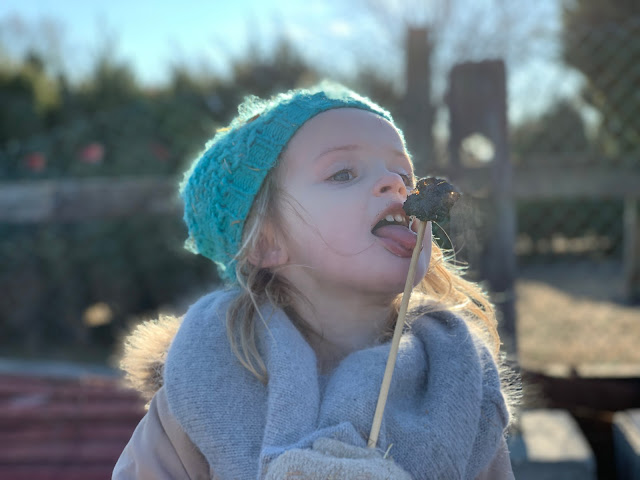 Damn. Eight years of this shit. The Thanksgiving Leftovers post is one that, among some of the other repeats, I look forward to sharing with you. While this blog has steered away from primarily the nuts and bolts of photographic technique and photography gear and more toward a guide to living a more creative lifestyle, the Thanksgiving Leftovers gives everyone a taste of something they enjoy.

Was that a run on sentence? I'll check with Grammarly at the end. Don't always listen to Grammarly but it's a pretty cool tool--much better than any spell or grammar checker that I've ever used in the past. In fact, at the time of publishing most posts prior to Grammarly, I typically said fuck it and allowed these words to reach the universe without any filters--no editor.

LET'S DIG IN SHALL WE? 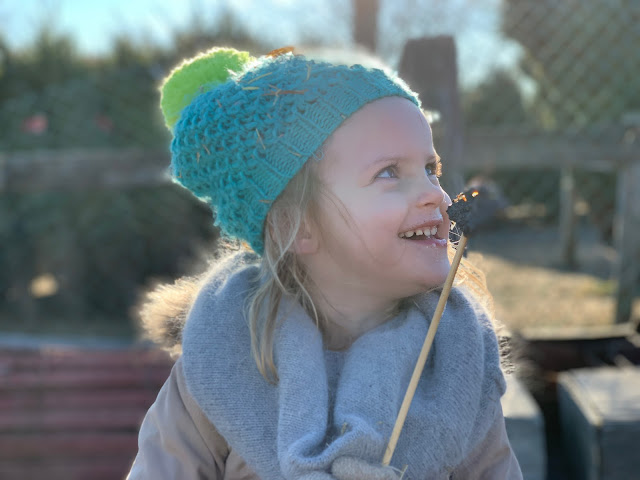 Did you catch that little pun that was snuck in there? Get it? Let's dig in? Thanksgiving? Get it?

If you've read all 7 years of these posts already (if not they are all linked at the end), you'd quickly find that this year's photos are nothing even close to years past.

First and foremost, who gives a fuck?

Next, while I'm a fan of creative rulebreaking, this does conform to the others in more ways than one.

How so? Well, the photos, like each year past, were shot either on, the day after, or to stretch, that Thanksgiving weekend. These were shot on Black Friday. 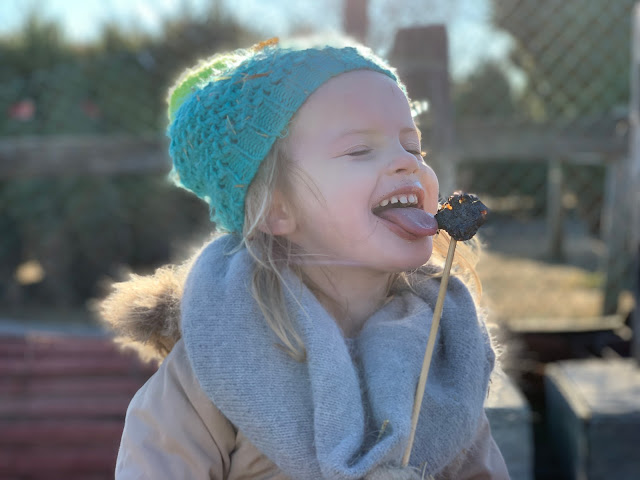 The other, kind of big thing that I tend to keep in the mix of these posts? Food!

Let's see, now the naming campaign has changed from "Part One, Part Two, etc.," now to "Year 8 and eventually Year 9," and so on.

While the content is very different each year, let's recap the photographs' contexts from each.

Year One :: A bowl of titty-city nuts. Recipe therein.

Year Two :: Ok, no food unless you count the leaves as sustenance. This seems to be the year that I jerked off over the early days of my first using off-camera flash with a bag-full-O-Pocketwizards. Everything had to be lit, no matter what, including my cousins that I tore away from dinner to experiment on. Jeez, they're all grown up now, except that little one, Mason, I think he stayed the same age.

Year Four :: While the innards where over-reheated by the time of production, this, roll, from Liscio's bakery, kinda competition of Cacia's, was nice and fresh. Balance I suppose. This photo is unique as I used a ring light modifier (I never do) and an old-school cinema styled fresnel that is actually a decorative lamp from Pottery Barn. It was killing me that I owned the fixture for years and never incorporated into a shoot until that night.

Year Five :: Me. Rocker style. A bowl of Udon noodle salad from Hip City Veg and some lighting, posing and post-production seeming to be some homage to Dan Winters.  Pretty good hair day though.

Year Six :: Does anyone remember that summer Olympics when that poor photographer choked? He was assigned to shoot these athletes on seamless white and, ugh. I can't even think about it. It makes me cringe. Well, being sadistic to some degree, that year I reflected on that dude's epic fail with my leftovers on an everything bagel version of that same shoot.

Year Seven :: A year that, for a first, I may have actually intentionally made a warm fuzzy feeling holiday photo. No strobes either. And that bowl? Boy if you know that bowl then you know that bowl and I don't need to say a whole bunch more. 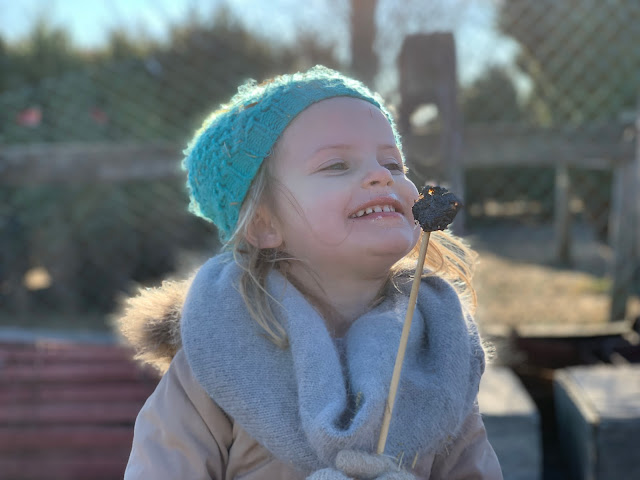 Grammarly is going to eat me up for that title. Wait. Get it? Year ATE? Weak? I tried.

The photos I decided to share today, and it took unrivaled fortitude not to share on social immediately after shooting, were too cute not to put in a holiday post.

The photo I shot that was originally going to be the lead, looked something like this... 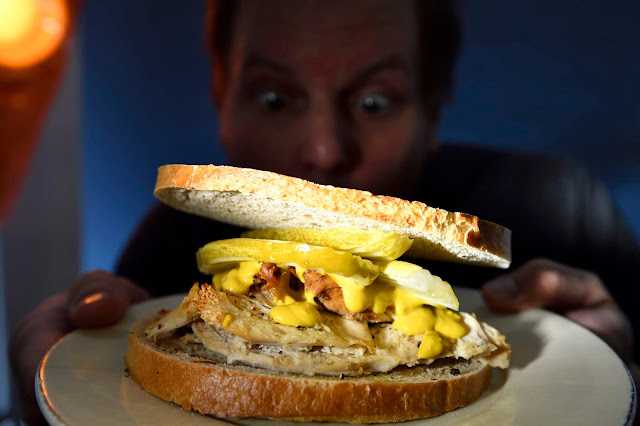 That's unedited. On that idea. While priceless for creative growth, self-portraits are a ginormous pain in the dick. This was probably the tenth shot while trying to dial in the light ratios and at the same time, maintaining discipline by watching the sandwich cool and bread become soggy. Just some turkey on Jewish Rye with some Kosher dill pickles and yellow mustard. I was starving and decided I wasn't thrilled with the idea anyway.

A quick NERD FILE:: on that one while we're at it? 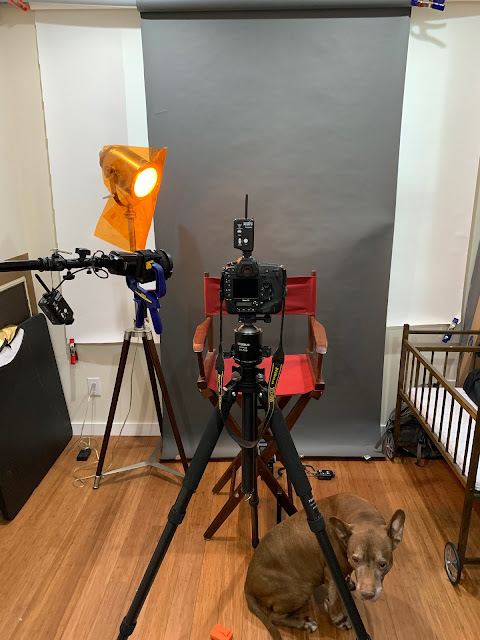 So I brought that Pottery barn lamp in again.

That's a Rosco, shit, not CTO but an orange gel that I added on to really up the ante on the colors of the end photograph and gel the shit out of everything.

You can't see the background light but there's a strobe on the floor behind the chair with two stacked CTB gels.

In the foreground, behind the camera, camera left is that key light on the sandwich. Strapped on that is a Rogue grid spot, called the Rogue, fuck, I forget. It doesn't fit that particular strobe so well so I clamped a big ole, but very light, Irwin Quick Grip, Handi Clamp. I'm an A-clamp aficionado (see Irwin and Husky hanging from the Arctic White) but that Irwin was in eye's sight. If curious, less than five bucks.

The workhorse is the Nikon D5 or better known on my sets as Susy Greenberg. She's perched atop a custom built FEISOL carbon fiber tripod system. Nothing like an a la carte tripod system. Feels so personal.

Bruno watching me work as per usual. 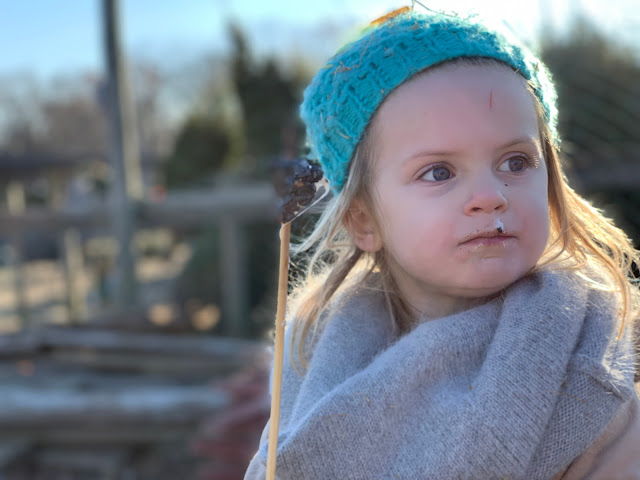 That is all irrelevant as that photograph wasn't used.....or was it? Hmmmm. Deep shit right?

Kids are pretty fucking rad--if they're your own. In all honesty, I don't really like other people's kids or dogs for that matter.

Not to leave anyone out, Emma is my newest born. 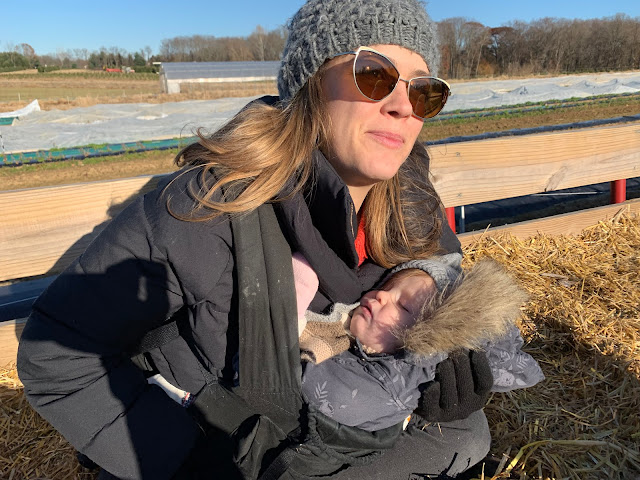 Ok. Looking at the photos of Harper, I cannot help but want to talk shop a bit about the images.

IS IT TOO LATE INTO THIS ARTICLE TO GET INTO SOME HOLIDAY RANTING?

Most of my friends and family are quite aware that I'm a food snob to exponential degrees. #FoodieFoLifeMuthaFucka

Just made that up.

I like I prefer canned cranberry sauce. This is something I like to reiterate frequently on these and other holiday posts.

Eh, other than that, I'm a supporter of locally sourced, sustainable, organic, pasture raised, give a pig a reach around, a chicken a finger fucking and all that stuff that comes with being a foodie.

Now, I gotta get to these photographs no matter how much I said I would stay away from the nuts and bolts. 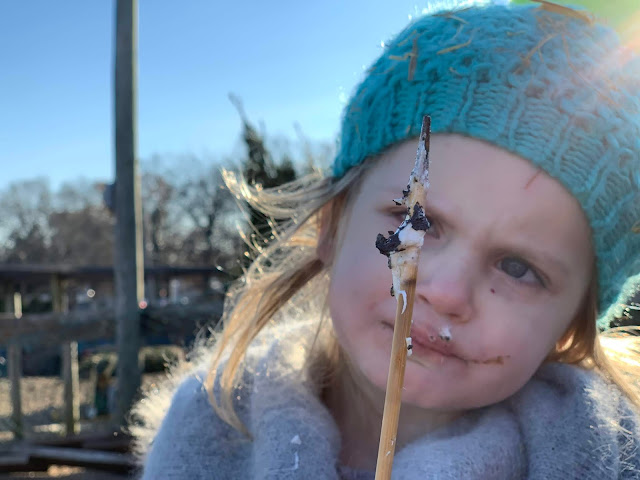 On this day we were at Linvilla Orchards to cut down our 2018 Murphy Family Christmas tree so it literally was an actual, technical FIELD TEST. I'm so fucking clever...or corny...or both...or neither.

Before going any further, let me share fully that I've been an Apple guy since the late 90s. All love to Steve. Been an iPhone user since the 3G I think.

Had the camera on the 6s Plus not been crippled, I'd probably still be using it today. It worked just fine. The new tech from year to year isn't making leaps and bounds like it used to. It will but lately it's been a pretty mellow progression. The allure to having the new model each year had worn off a bit. And I gotta say, with my wife's and my phone paid off, it was super nice to have that bill lighten up a bunch.

And then this XS Max comes out. Ok. Over a year with the broken camera, being a photographer it was kind of ridiculous that I was running around with a camera in my pocket that didn't work.

Not too long ago the portrait mode was announced and it definitely got my attention. Not enough to make the jump though.

Then, this adjustable Depth of Field?! What! Dude. I was very interested.

Excuse the fact that I'm trying to keep this section short and sweet. segues and rhythm may be absent but just trying to share the facts, not be artistic at this moment.

So I thought it was going to be like that selective DOF/bokeh camera that came out a few years back. Fuck. I can't remember the brand. It was very cool. You could pick the focal point after capture, therefore moving the DOF/bokeh forward or backward in the scene. Very cool tech. I think it was a Kickstarter campaign. I'm certain they couldn't keep their heads over water and probably sold the tech. And I'm pretty sure more than one camera manufacturer sells these cameras today.

So I thought this was the tech that was going to be in the iPhone XS and XS Max. I was so wrong.

The phones, yes two, one for me and my wife. Oh, damn, yeah, we also left AT&T after a decade. Now along with cable, home security, and internet, Comcast/Xfinity is our mobile carrier. Hey, they offered big deals to us. Would've been foolish not to jump ship.

The phones arrived about two weeks

Wait. Not going there today. Forgot. I like to write. What can I say?

The phone is fucking gorgeous. That added weight from the stainless steel? Righteous. The processors and all that jazz? Imagine me kissing my fingers as would a French chef.

I won't really go into files and low light performance. Maybe another day. The fact of the matter that I work with the Nikon D5 that has one of the best camera sensors known to planet earth. So I'm spoiled in that sense.

On this day in Linvilla, I couldn't wait to jump into the Portrait mode.

These photographs of Harper are straight out of camera. Besides straight portrait mode, there was nothing done to the photos.

About the iPhone adjustable DOF? Take it easy. Go overboard and it begins to look like an amatuer learning how to Gaussian Blur in PS CC.

While very cool, it ain't real DOF adjustment. Just keep that in mind.

Otherwise, I say all tens for the XS and XS Max.

If you were wondering...

That last photo, I focused on the stick and interestingly, it strangely looks like a creepy eyeball over her eyeball. See what I mean?

THE OTHER YEARS ON THIS SAME OCCASION::