That's a mouthful of a title now, isn't it?

Without any delay, why not start the post in total disarray? They usually end up that way anyhow so now's as good a time as ever.

Those who manage to keep up with the postings lately will notice a shift. Shit. The last one some would consider downright dark. One day you're reading about beautiful bokeh and then, POW, I kick you in the devil's highway with some serial killer shit.

And today I bring it back with an editorial photoshoot. It's how it's done around here. What can I say?

So I've been trying to take some time away from the social media as of recently. That doesn't mean I haven't been busy. The notion these days is that the busier you are the more content you would then share on the social networks.

There's the camp that believes that the I'm-the-busiest-hardest-working-person-ever posts are bullshit. And there are the other camps that, well, just don't engage with social media whatsoever; touting they are the truest to busy--so busy that there's no time for such petty behavior.

My opinion? There's a lot of gray areas.

There are times that I'm a posting fool. Fucking Hootsuite-ing it out for weeks at a time in a single sitting. Now that's busyness in its own right. 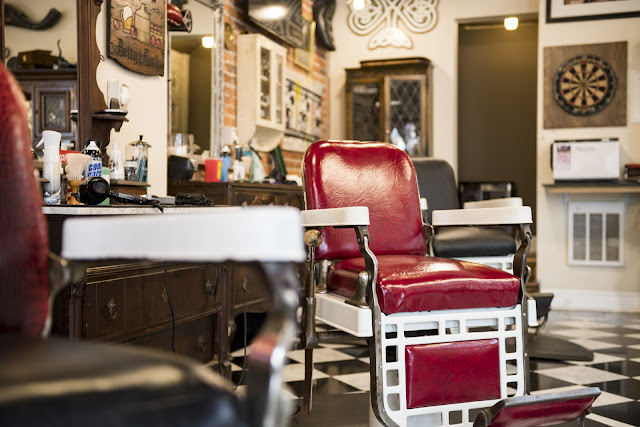 Ok, that can be for a multitude of reasons. One biggie could be that my iPhone camera has been busted for quite some time. Hey. Today I will open and activate my new XS Max. Super stoked.

But while I may not be snapping and sharing in hopes of stirring up new clients, the behind the scene situation is much different. For instance, a ton of writing happening. Yup, storytelling by any means possible these days.

Let's not forget the dadapreneur part. Harper's 3.5 years on our planet now and Emma 10 months now. So while the work comes in, the time able to share is often limited.

So I'm here to say today, no worries, I'm still here...and there are terabytes of data on my hard drives that are begging for your attention.

Besides, the qualifying leads I get from certain social media outlets are not much better, sometimes worse, than that of even Craigslist. Yup. I said it. I own that shit. People are ashamed to admit using Craigslist. Sure, I get my fair share of creepers but like with anything, you gotta weed the garden to help that garden grow.

Wow. How'm I gonna bring this back to barber shops and editorial work? 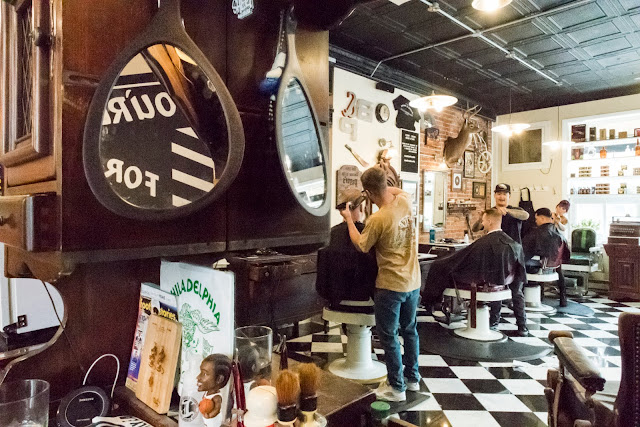 The project :: As if you missed the post's title and the related opening sentence, the shoot is for a digital and print publication, BARBER EVO magazine. There are two shops being featured in the issue, Burke & Payne Barber Co. and Barber on 24th. Both are owned by Michael Burke. I'll get to him in a moment. Anyway, as I had the opportunity to shoot at both locations, I was going to commingle the photographs herein today. But they are so very different, the two shops, the vibes, that I decided to split them up into two posts.

AN HONOR AND A PRIVILEGE 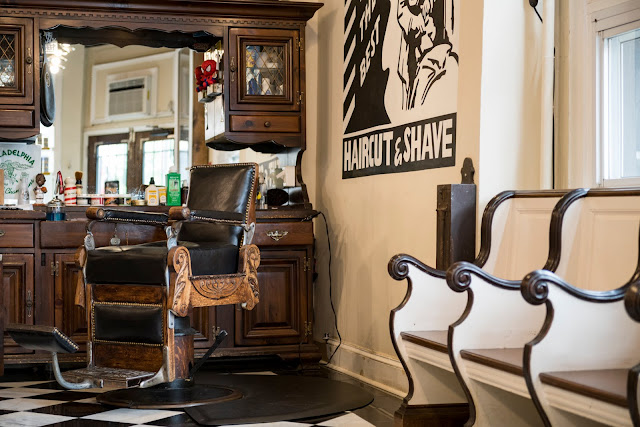 I met Michael Burke back when I was slinging drinks at Roosevelt's Pub on 23rd and Walnut Streets, in Philadelphia. Boy, the people I've met there over the years. Everyone from rapper DMX and his father and local artist, Joe Barker to, I forget if it was the grandson or great-grandson of John Jacob Astor. I shit you not. Number one, it was a big Wharton hangout and two, he paid with his Black Card. Fucking Warby Parker was thought up over those guys having lagers at the bar. They lived upstairs. Don't get me wrong, I met some real pieces of shit too. If anyone knows the name Bruce Mays then you know what I'm talking about. Yup, old New York tycoon money, scam artists and everything in between. And once in a while, some lasting relationships are birthed from these meetings.

Michael Burke had a friend that was a waiter at the pub; nicknamed "Radio." Hey, we weren't the nicest cats around. While waiting for his buddy to finish his shift, we'd throw spit while he'd have a beer at the bar.

At that time Burke was barbering at a place called Domenick's, just a few blocks away, on 20th and Manning Streets, just below Locust.

It's funny, to this day, there are still a few photographs that I recall seeing that I will never forget and that have done their part in inspiring me to follow my creative soul. While it was long before I picked up a DSLR, I recall sitting in the waiting area at Domenick's, patiently anticipating my turn in Michael's chair.

[Good thing I'm splitting this up. Had no idea I'd take this route. I don't outline in advance...ever.] 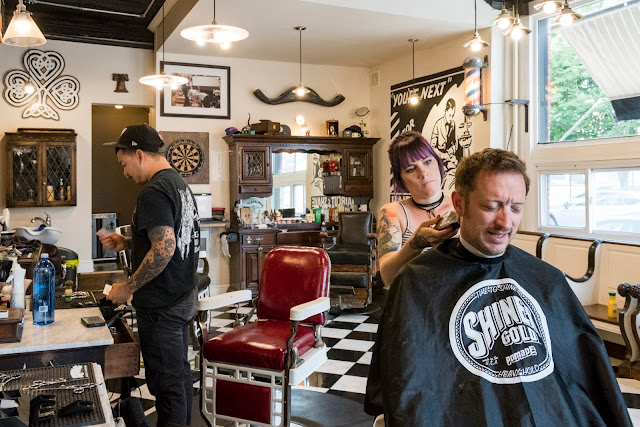 So I was flipping through Men's Health magazine when I noticed hanging up on the wall, between some ten-speed racing bicycle frames and a beautiful black and white of a gorgeous naked female body, a gallery-sized framed color photograph of Michael Burke, in action. It was an editorial styled photograph of Burke dressed in black pants and a black shirt. It was a profile shot. His knees were cocked like a boxer, center ring, ready to throw his jab, jab, right hook combination. He was hyperfocused, with scissors in one hand and comb in the other. The client was leaned back and super relaxed.

I was called to the chair. It was my first time getting a cut by Burke. He strapped some paper do-dad around my neck and then draped the cape over my head and torso and secured it accordingly. As barbershops go, there's often a ton of arbitrary chitchat. As a newbie in Michael's chair, the pressure was on to bring up something obvious (I kid). So it was the photograph that I would bring into question.

Michael explained to me that it was not planned, that a passerby took the photograph without his even knowing. That photograph had even won a competition of sorts. 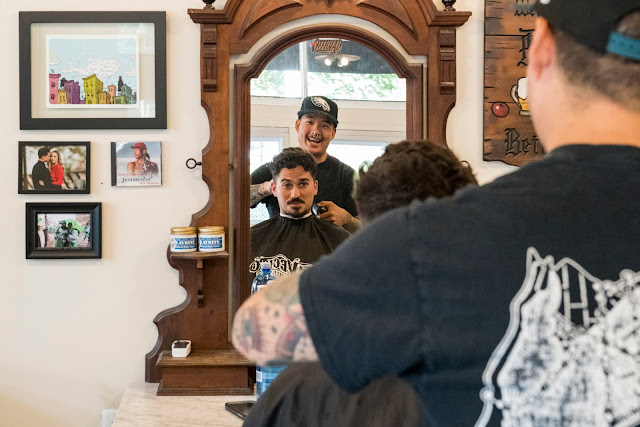 I'm standing in two of the most renowned barber shops in Philadelphia, conceived, owned and operated by barber and entrepreneur, Michael Burke, Burke & Payne Barber Co. and Barber on 24th (to be shown in next post), commissioned to shoot them for Barber EVO magazine.

[NOTE :: While Michael was out of town for the weekend of shooting and you don't get to see him in in the photos, if you look at the above photo, there's a picture on the wall of a man in black and woman in a red shirt. That's Michael and his wife Tanya.] 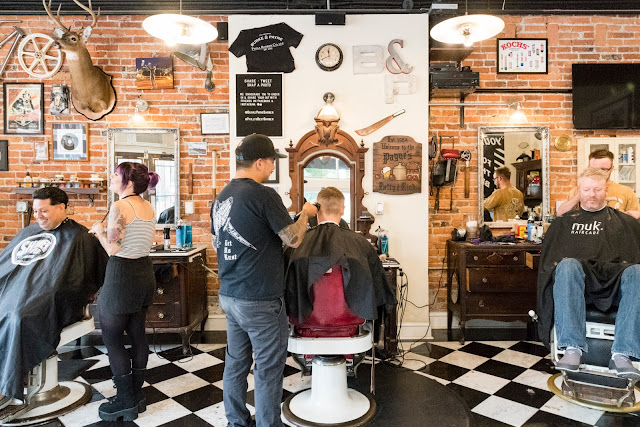 Prior to shooting, I was given access to both shops. I'm a grown man and it still feels awesome when trusted with something like keys and alarm codes to a business for access any time I like.

And I took full advantage of any time I'd like. I wanted to show up super early, hours before opening, to not only get a feel for what the ambient environment will be like but also to ease into the situation with coffee and lots of frames of the empty shop; lots of entire room shots and tight detail shots.

The ambient for each would be tricky. Working in cities, you have to battle the buildings for the sunlight and/or shade. The windows of Burke and Payne face North and East. Those of Barber on 24th face South and East. In the case of both shops, that didn't mean shit.

As the day progressed and clients would arrive, there wouldn't be time or space to be dicking around with light stands and strobes and whatnot.

Luckily, when it comes to photography, my Nikon D5, that's my Suzy Greenberg, is a Weapon of Mass Destruction and one badass motherfucker.

Stay tuned for part 2, when we get into some real nerd-like shit. You know, gear, f-stops and all that good stuff.