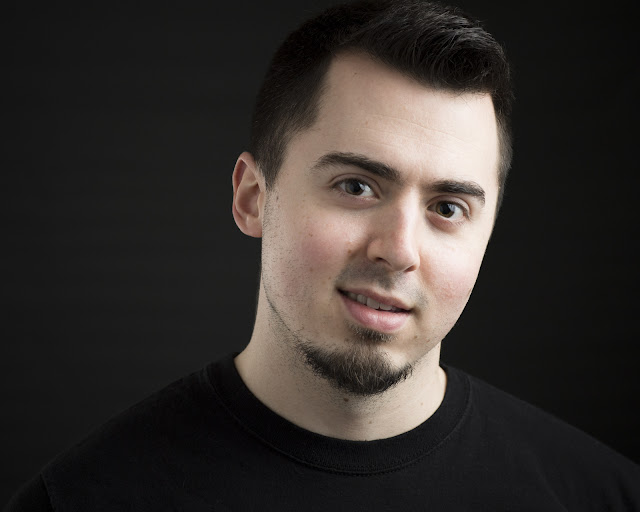 Hey, I’ve done much worse with titles. Nearly a decade ago I had a two part series named, “HOW TO SHOOT A BLACK MAN,” parts one and two…

I suppose a segue right into the Nick Kelly black on black headshot session would leave a lot of unanswered questions so early in.  So then, before we proceed into headshot direction and modeling brilliance, that other back black story.

Yeah so, “How To Shoot A Black Man,” made some readers unhappy. And that’s cool. What I write ain’t everyone’s flava. But since the blog was (is) driving traffic to a niche audience, Google had accepted and placed me in a pretty dope category: revenue generating. Well, long story short, they didn’t like the titling of those old posts. Said my ‘content was dangerous to their advertisers’.

It was just a couple posts about adjusting exposures for darker skin tones. Fuck. Anyway, Google blacklisted me.

So in light, or darkness, I blindly and ignorantly (real definition, not street) went for another ballsy title. Or did I?

I actually first purchased the CASSETTE tape by Chuck D, Flava Flav and Terminator X’s Public Enemy. The album? “FEAR OF A BLACK PLANET”. I just downloaded that album again recently along with a few other classic rap from those childhood years.

So I say not ballsy. There’s still a mild double entendre but the guys that coined it? Well, you figure it out. The Headshot addendum was my personal touch. Nice right?

#FML. A page long foreword and not dick about the session yet. It’s a slow burn. relax. They always are. I’m as addicted to key striking as am I behind the lens.

The main ingredient therein that title.

Black on black headshots is a challenge, not unlike white on white headshot photo shoots. While many say no no no to both styles, as per usual, I’m the underdog that loves to go against the grain. Except when cutting beef for homemade jerky. Going with the grain yields a tougher jerky whereas against the grain produces a chewier and more easily masticated product.

Ever see the FX show, THE AMERICANS?

On the program there’s a chick named Martha. Without throwing out any spoilers if you haven’t seen it (it’s an awesome show), Martha reminds me of the headshots that are so common across the world wide web. She’s nice, maybe even pretty for some people but she’s not a 10. You may disagree but I’d say on a good day, she’s a 4. And that was the episode when she was in lingerie and on all fours. But I wasn’t checking out her face too much in that scene. Ok, let’s take her up to a 5 and it’s only because of her build. Her grill is what takes her down so much.

Martha is ordinary; follows suit to the stereotypical office secretary of the early 1980s. With a lot of photographers on the market these days, often they end up down the ordinary path. What’s ordinary? Think passport photograph.

Over the last few years, my headshot styling has become very specific for my clients. People go to my website and can see through the Seamless Heads portfolio that there is a level of awesomeness that is consistent throughout. #narcissistic

What are those variables? Posing. Processing. Light. Mmmm. Those catchlights though. I use the same lighting for 99.9% of all headshot sessions. Why? Kinda the MAM::P signature look.

On this particular day, going black on black, I decided to throw a wrench to the renowned Michael Anthony Murphy :: Productions Seamless Heads look.

If you reverse engineer the body of MAM::P headshots, you can find a pair of catchlights revealing a overhead softbox key and an under the skull fill. And that’s it. Don’t use any kickers, rims, seperation or whatever you like to call it. Why? Who Says I have to? Fuck it right? Anyway, I get that softbox so tight and back enough that it drops some protons behind the model, pulling double duty in a way.

Oh shit. Did I totally not even introduce today’s talent? That’s Nick Kelly. currently earning his chops in the industry. Pretty sure he just scored a role in CREED 2, if I’m not mistaken. We also share some DNA. Not in a gay way or anything. Not that there’s anything wrong with that. No, Nicky and I are cousins.

NOT BLACK AT ALL

To confuse you more, before we move forward, lemme disclose that the background used is not even really black. In fact it’s THUNDER GRAY seamless paper from SAVAGE UNIVERSAL. It’s black to you because of the INVERSE SQUARE LAW. Search my posts and I’m sure you’ll find in more than one article how that physics principle of light was applied here. Sounds intimidating but really not once you get it. I use it regularly when shooting with off camera light.

We shot a few shirts but the black T, I knew would be the one. So as mentioned, and finally segueing back to it, the wrench was clanking all up in those gears.

Had to bring in that separation light. But subtly. Didn’t want to make it the star of the show. Hardly  noticeable. Just enough so that Nick’s black shirt didn’t or doesn’t meld into or onto the seamless. Further, the key was in way that would help with that lifting as well.

And that’s where the status quo gets further crushed.

See that triangular splash of light under his right eye, on his cheekbone? That’s a telltale sign of Rembrandt lighting.

While I just lost a dick load of short attention span, killers of my bounce rate, just jumped over to a Google image search to see.

Anyone still in the room? Remember chat rooms? They were the best place to be a total voyeur back in the Wild Wild West days of the internet.

I did it again.

While preaching the need to exterminate the ordinary, Rembrandt lighting ain’t new. It’s been around since, well besides the birth of the Sun and Earth and Woman, since, uh, Rembrandt. #obvious

Pretty classic and hardly ever used in my bag of tricks these days. Which makes it very new for that reason - in my bag. I don’t know what’s in your bag. 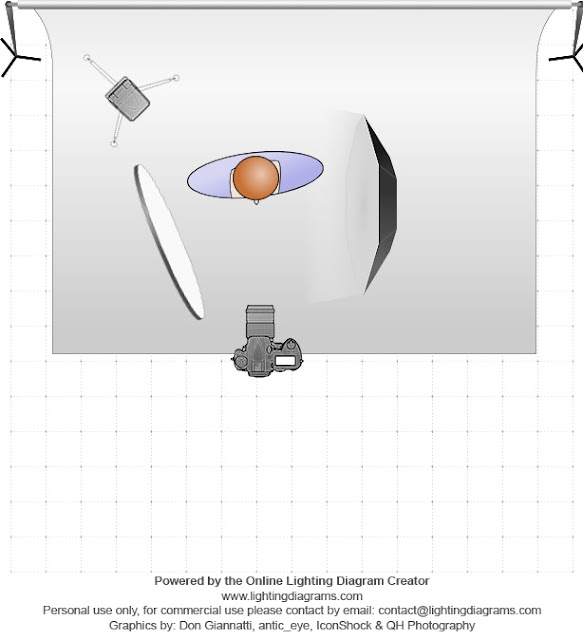 Thanks to the Online Lighting Diagram Creator, I’m able to bore less with words and excite you more with a gridded, drafting/architecture type diagram. After all, following video and stills, then graphics and then paint or drawings, these diagrams probably come in next followed by charts and finally bullet points in the internet attention grabbing stuff.

What are you looking at?

Not a trick question but maybe a tiny bit of trickery happening in there.

Let’s first break down what you see.

First, camera right is the key. A 60 inch Photek Softlighter. Basically, a large octa with an umbrella skeleton an price. It’s Annie Leibovitz’s go to mod for just about every shoot.

Next, is that rim/kicker/seperator/what-have-you. bare speedlight zoomed in.

Moving on and counterclockwise in the lighting department is a 40 inch white reflector A-clamped to a light stand. That was just to bounce a little soft fill on Nick’s shadow side.

Traditionally, the move to get that Rembrandt look is to, as I call it, light on the 45s. The light being positioned on a 45º angle on the X, Y and Z axes with the subject residing at the origin.

Through some fucking with shit, the official way to grow as an artist, I discovered that the “on the 45s” theorem need not apply to yield that Rembrandt triangle. You can have that light perpendicular or parallel to either the X or Y axis and as long as that key is far enough away in Quadrant IV (Quadrant III if key is reversed) relative to and with the subject remaining at the Origin, then that Rembrandt look will still be achieved.

It’s a mouthful isn’t it?

You just don’t need to worry about being on that magical angle to get the effect. Don’t sweat the numbers all the time.

Speaking of numbers. Some of you might want exposure. Fine. Real quick.

Camera :: Nikon D5. That’s my Suzy Greenberg, my workhorse.
Lens :: Nikkor 85mm f/1.8G. Wonderful optics and bokeh if needed. In tight or from a distance, for still and motion, the 85 is sexy as hell.
Comm. ::  Pocketwizard Plus ii transceivers. Yeah. they’re getting long in the tooth but my triggers have never failed me yet, not even when placed far off and behind a ginormous concrete bridge column.
Stability :: FEISOL custom carbon fiber tripod system.
Key mod :: Photek 60 inch Softlighter.
Fill :: Westcott 5-in-1 40 inch reflector.
Light ::  Yongnuo 568EXII, Canon 430EXII, and Vivitar 285HV. No Profoto strobes here. And I still get the job done, every time.

Hmm. I’m not at my desk with metadata access at the moment but for headshot sessions, my numbers are the same most of the time. Except for those dark skin tones of course. :)

I did mention that seamless background right? The Savage Universal Thunder Gray? And all the supports, background and stands? Calumet. Out of business for the most part. So sad.