Ringing in 2018 in Philadelphia (Pure Uniquity or Maybe Not) 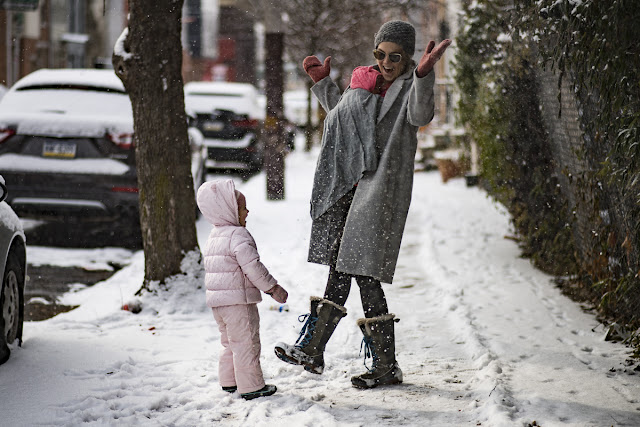 There was a hot Morning Star veggie burger accompanied by a fine Belgian Tripel on the coffee table…
The clock read about 11:40, post meridiem. We had given Ryan Seacrest as many chances as humanly possible BUT what a fucking tool bag, right? Anderson Cooper has officially gotten the nod from camp Murphy. Now, as for his sidekick this year? Andy Cohen. Pretty weak. Not a Kathy Griffin fan either but her absence was felt for sure. Something to do with some shit that went down in The White House. I don’t know.

I helped get my wife Stefanie, daughters Emma and Harper, oh, and our pit Bruno, up to bed. Not the normal hour our newborn and toddler go up but for obvious reasons, i.e. New Year’s Eve, we all hung out a bit longer.

The plan was to get everyone tucked in, watch the ball drop, kiss the fam and then head down for my late night treats. Hey, nobody ever accused me of being too normal, that’s for sure.

Harper, 2½, made her way to our bed, complaining that, “my body hurts.”

I climb in bed next to Stefanie and Harper and Bruno. Emma’s in the cradle or bassinet or whatever it’s called, beside the bed. And yes, as the family has grown it seems a king size is in our near future.

Realize reporter Randi Kaye is high as a kite while on a weed bus. CNN gains big points in my book.

About to get up to give the round of kisses, Harper projectile vomits on the bed and my body.

Still covered in vomit, I give kisses all around before helping Harper into the shower and Stefanie swapped the sheets.

Let’s try this again. Stefanie breast feeds Emma and I tuck Harper in our bed.

I strip and decon in the shower.

Fuck! My food! I would have that vegan burger and craft beer if it took me all night. So I was on the couch, chomping the hell out of the cold dried sammy while trying to moisten with swigs of the ale; Nathan’s hot dog eating contest style. Such a crime.

Stefanie yells down that Harper threw up yet again. It was going to be a long night.

Now with the operation streamlined, we are able to more quickly clean the kid and the sheets.

Ah. Close my eyes. Harper is lying belly down on my chest. Her hair brushing my chin. Reminded me of when she was Emma’s age.

Awoken by vomit being shot out of Harper’s oral cannon and onto my clothing, neck, face and into my mouth. You may be gagging as would I, especially after 5 Tripels. Think big ABVs.

Running low on sheets at this point and with the washer and shower running round the clock, eventually the hot water tank is gonna get on the low side. It did. The only thing that seemed to help the Harpster to feel better was to stand endlessly in the hot walk in shower. This ultimately left me with only hints of warmth. It reminded me of the abnormally small, cold shower in room 456, in the Preston building at Penn Medicine at Pennsylvania Hospital where Emma was born. Hint hint to the maintenance crew over there at 8th and Spruce. Don’t get me wrong. Freaking love that hospital. Harper too was born there, a couple years before and just a few doors down. Ok, they’re not actually born on the 4th floor but, well, you know what I mean. I hope. I digress.

In hindsight, I probably could’ve gotten Stefanie to keep an eye on Harper while I ran to the East Wing bathroom of our abode. For real. West wing is the master and en suite. Baller, what can I say?

Shrinkage and shivering, exhaustion officially sets in. The bed calls for me. Alas, I slumber, yet again.

Not even sure by this point what was happening. I sat on the toilet like The Thinker, awaiting Harpers 5th or 15th shower. I see Stefanie fading as she tries to feed Emma.

It was an all around shit show.

As you may or may not know, no post here, well most posts here, are not complete without the official NERD FILE :: to explain the creative processes associated with the photography herein.

So, without further ado… 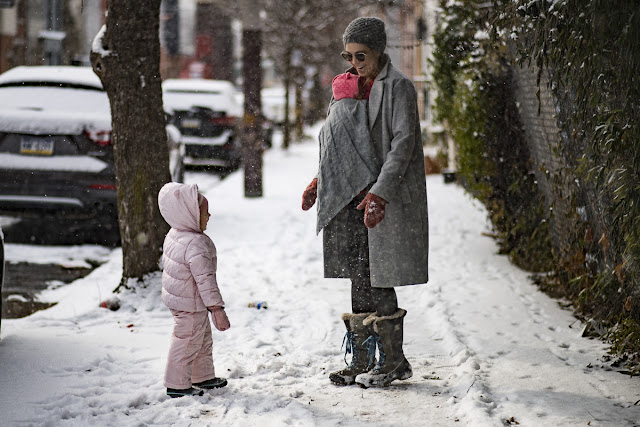 Being the first snow of Emma’s mere days as a member of planet Earth, Stefanie and I had no choice but to bundle up Harper and the newbie to introduce her to my favorite giving of Mother Nature while also creating some pretty fly photography.

The workhorse? Suzy Greenberg, my Nikon D5. This flagship ain’t for the faint of heart. Thinking back to the O.R. and convo with Dr. Renee Anderson while she was forearm deep into my wife’s abdomen, I should have replied to her remark more diligently while I was shooting the C-section.

Let me preface by saying Dr. Renee Anderson is our shit. Rock star of docs in our opinion. So if you’re ever in need of a gangsta OB/GYN, she’s the answer, aces. I’m digressing, I know. Deal with it. BTW, she’s at Penn Medicine. We even high fived and hugged after Emma’s delivery.

Now, excuse me while I slip some jabs.

Stefanie was on the table and sliced wide open. I was with the D5 in hand and emotions and adrenaline through the roof. Oddly, while my wife’s innards were outwards, the surgical team turned attention to my camera. The comment arose, by Dr. Anderson, if I’m not mistaken, that with camera tech in mobile devices, it must put a strain on the reasoning people would buy such big and expensive camera gear. My brain spinning into a frothy mush, I was only able to muster an half comedic comment that clients would fire me if I showed up on set with an iPhone. Not sure how I let that comment slide so easily with such a feeble rebuttal.

Fact of the matter is, when investing in a $7000 DSLR flagship body, you are investing in the newest, latest and greatest technology the image making world has to offer. Then in a year or so that tech will trickle down to the second tier pro bodies, then to the consumer bodies and finally, a few years later, some of it will find it’s way into mobile devices.

But even so, there is so much to be said for the sheer size of sensors in flagship cameras that the highest megapixel hobby cams and mobile devices can never touch. Not any time soon anyway. Pixel size and their light gathering ability is second to none. Dynamic Range. It’s what it’s all about. And don’t forget Nikon’s low light capabilities that CIA operatives would drool over.

What about optics? Super fast glass? Focus systems. Frame rates. And control. Control. Control. FML, how did I forget these values I hold so close to my heart. You dropped the ball Murphy. You’re better than that MAM.

I guess being at a loss for words is pretty normal when there’s a giant hole in your wife’s belly. Just saying.

Lately for walking around, although big and bulky, I’ve been strapping on the Nikkor 24-70mm f/2.8G ED. Pure awesomeness and versatility at a low price of about $2000 USD. That’s nearly a $10,000 rig when all said and done.

But on this day I opted for the Nikkor 85mm f/1.8G. Typically that lens lives for my studio work but there’s just something about the optics that I love so much about that lens. Especially wide open at f/1.8.

The snow makes exposure a bit tricky. Clipped highs are more common than not when it comes to shooting the white fluffy. So when I’m working the flakes, I tend to underexpose by a stop or so to be sure all the info is recorded. The dynamic range is so deep and wide that the RAW files can be pushed pretty hard without any worries. Better to have the information now and clip later if need be than to end up with nothing to work with. 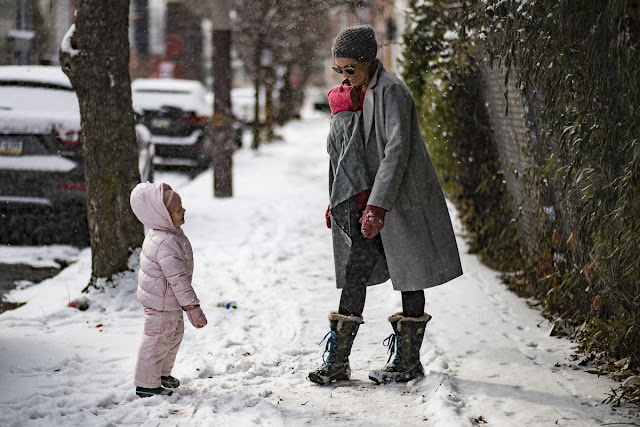 Having said that, here’s what that days exposure looked like ::

As for the Kelvin temperature, I simply threw the D5 into Auto White Balance mode. I never ever ever use auto anything. Except for once in a blue moon. Auto is the death of your creativity. Auto allows the camera to make the creative decisions for you rather than you making the creative decisions for the camera. Catch my drift? It a partly cloudy, super bright, super snowy day in the city, I’m confident that Suzy will get the temperature pretty close with only minor tweaking, if any, needed in post. If I was working with strobes, as I usually do, this trickery would fail. Jacking up White balance when using strobes can cause nightmares in the digital darkroom. Trust me. Succeed from my failing. My offering to you :)

I did some stuff in the Adobe Camera RAW editor. Basically, and not much more, upped the exposure about a stop and a half, cranked the Clarity and Haze sliders a touch and, er, that’s about it. Sorry to disappoint. When working with Suzy Greenberg, I try to get it right in camera as much as I can. Only with my iPhone do I ever ever ever ever ever ever ever dare fuck with a filter. Any customization with the Nikon RAW files are pure customized edits unique only to MAM::P. Everyone and their mother can slap on a Gingham. Only MAM can create a MAM.

Boy oh boy this post went on way longer than I ever anticipated. People don’t even read anymore. Oh well, for those that do, thank you for enduring down to this point. Hope you enjoyed. Maybe words are on their way to being hieroglyphics and that’s all good but at the end of the day, I love to create and with that love to write.

Anything else I miss?