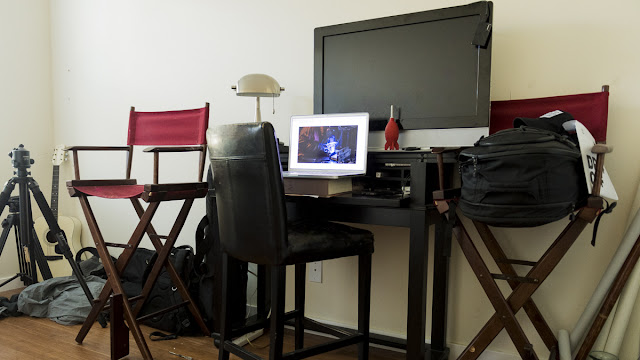 [First things first. Yes, that is the desk in my studio and yes it's a messy space. A, You're seeing it on a good day and B, you are aware of the commonality that some of the worlds greatest minds also produced their works in similar capacities, aren't you?]

Compared to an era where John Doe did his mandatory 20 in his windowless office and his wife's duty was to keep house and raise 2.5 children to be exact replicas of themselves, today that very familiar mold had been crushed.

Certainly there are still those who adhere to those tried and true ideologies. Some may be fearful of this new paradigm shift, fearful of letting down their parents or simply fearful of fear in and of itself. On the other hand, some just felt and feel it in their DNA, to due their part as a cog in the machine.

And either and any of those? Who are any of us to judge. Except for the fact that that entire paragraph was just that. So sue me (metaphorically speaking).

Moms and dads, moms and moms, dads and dads (I miss anyone?), so you found your precious little gem has dropped out of an ivy league school. Approaching debts upwards of six figures he said he was bored and uninspired. Parent or parents enter panic mode, think their bambino is either doped out or mentally unstable, you react, in a bad way. I'm here to tell y'all to relax. Your little bundle of joy will be ok.

The journey has changed. New paths forged every day.

Little Bobby or Sue? Who knows. Maybe the next couple years are spent seeking venture capital for some, in your eyes, a wacky app idea while. Maybe they fail. Maybe they discover their inner creative and spend time living with only a back pack and a camera, on the Appalachian Trail. Maybe he or she loses an foot to a rattlesnake bite. Maybe they then write a book about the journey and it becomes the greatest fucking novel of our time. Maybe.

When they get near the finish line, your kid shares a room at the nursing home next to a retired accountant who will end the game with wealth for his family, Bambino is single and broke. But you know what? One exits with regret and the other with a smile. Can you guess who is who?

That was a trick question.

As per usual, I was beginning to get way from the point that I was trying to get to.

Work-work balance. It's mine. I coined it right now in case you were wondering where the term was born.

Let me share with you anecdotal evidence. Not to go all narcissistic here but, well, look at it like this : I'm always here to share with full transparency, my trials and tribulations. With this information you could learn how to benefit from adopting my wins and/or avoiding my fuck ups.

I was actually going to file this post under the DADAPRENEUR category but it just felt to unique for what is trying to be accomplished.

Besides being a stay at home dad, at the moment I'm working with current clients, pitching one or two new ones, updating this sponsored blog with current and compelling articles, collaborating on a  short film project and, oh, yeah, most recently, writing a feature length screenplay.

You either are saying to yourself. . .


"This dude is fucking nuts."

Be that as it may but those who've been around here know that you can always find the truth in these pages. As mentioned, I'm open about fuck ups and embarrassing moments along my journey. So. There's that.

I'm not trying to sell you how everyone part of this new camp has to be oh so busy - all of the time. And trust me, you will find that around the social networks. Everyone wants to be the busiest person in the room as Americans equate busy to success. I call bullshit.

You can be super successful and have lots of time for self. On the other hand you must be productive at all times, be that on self or on work. Time management.

My list of work may seem loco or ludicrous but don't be misinformed. Via oft practiced time management skills, prioritizing according to deadlines and/or personal goals makes what seems like would be a world of anarchy, a glass-like sea; serene.

A for instance if you will.

Tomorrow I will not shoot on location, pitch a client, write a blog, write ten pages of screenplay as well as eat, exercise, meditate, fuck and sleep. (just seeing if you're paying attention)

During any given week, no matter how much I have on my plate, there's gotta be time for critical "self" items on that ceramic.


Today, in my world, you may be reading this on another day, is Tuesday. Tomorrow, Wednesday (don't get confused now), will be not necessarily busy but definitely productive. Now, before progressing, let it be known that for sure there are days that are busy as well as productive, days that are busy and not productive and vice versa.

So tomorrow, our daughter Harper, aka H™, will likely have me up and chasing her around shortly after 7:00. Around that time I'll prep the coffee and when that's hot and ready it's time for a cardio session. That can last 30-60 minutes depending on my schedule. Next will be a shower followed by meditation. By then, H™and I will maybe go run a few errands if need be; camera shop and Home Depot seem likely. Back at the pad, I'll get to work. No shooting tomorrow and being that this post will publish today, looks like the forecast will be the screenplay. Ten pages and/or 3 to 4 hours.

[Note :: some readers are already scratching their heads;" 3 to 4 hours of work?! That's not work!" If you aren't in the creative world, and even more so in the world of writing, you wouldn't know how quickly the brain burns out and work begins to suffer. It's not like working on the factory floor doing a specific task 10 hours a shot. And my hat's off to those people. It's just very different. Constantly searching the brain for new and awesome material can burn a lot of energy. Now this doesn't mean that two 3 to 4 hour session split morning and night aren't possible. So, er, end of note.]

After writing, lemme see, tomorrow looks like around 5 or so, I'll do emails and pay a bill or two. Following that brief session from hell (I should do those first thing, I know), I'll feed the brain with information. Likely about an hour or so while I'm preparing dinner. The brain food can come by written word, blog, blog, podcast or youtube. Next will be dinner and family time. I'll then follow with more intel for the ole lobes. Finally, after we put Harper to bed, wife and I will have some QT. I put her to bed round 10:30 when I take our Pit-bull Bruno for his late poop. Last but not least, I'll have a snack and watch some program, movie or otherwise, for about an hour. Then, I'm in bed by about midnight.

Now, that's just Wednesday. Thursday, unlike John Doe's desk jockeying, will be very very different. Everything from times to tasks can and likely will take a complete 180; resembling more the life of a sociopathic schizophrenic than that of a DADAPRENEUR.

And while some days may resemble others throughout the quarter or year, the following could look like a unrecognizable model.

And you know what? I dig that.

To wrap up. Just be liberated and follow your heart. Do that thing that you feared the most because it's likely the thing that will bring you the most happiness.