Vision :: GOLDSMITH and our collateral works with the "All Weekend" debut [Shoot/Location/Look 1.1.1] 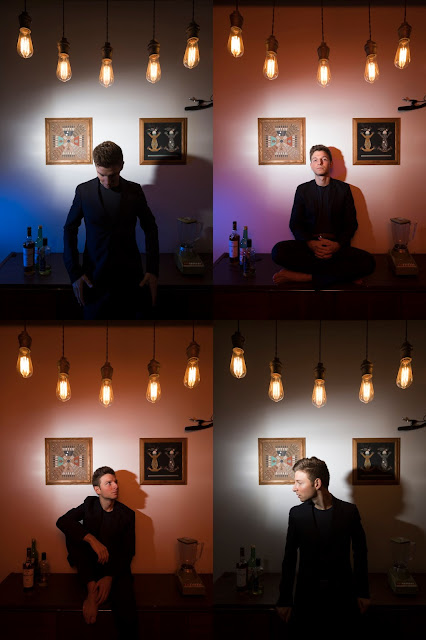 For this subconsciously AndyWarhol inspired quadriptych, how do you hypothesize these four different lighting scenarios were achieved without setting, resetting, programming, reprogramming or touching anything, for that matter, besides the shutter release?

You didn't think I'd drop that bomb this early in the article did you? Story arcs people. Only in Memento could the end be told in the beginning of the story. I mean following rules has never been my forte but when writing, I prefer to take you along with me on these cerebral expeditions.

However, as for the prologue, the Goldsmith intro, for the sake of the troopers who have read part 1.1.0, and for the sake of my already waning sanity, let's present today's artist and model as deftly as I know how.

If that doesn't quench your thirst for knowledge, you can check out part 1.1.0 [HERE] or even our earlier [HERE]. And as these series, links will be updated accordingly, albeit likely not instantaneously, still, accordingly.

Friends, there is an indescribable synergy when artists from different disciplines unite.

Working with Goldsmith and to grow his branding materials has done nothing but transcend those affirmations.

Amidst collaboration and moreover, these specific collaborations, the mind, body and soul felt, and feel weightless. Artist to artist, we know and understand each others needs to satisfy that creative hungry right brain. Further, and these works being no exceptions, the liberation to experiment, push boundaries and cross lines is mutually exhilarating and acknowledged.

After shooting the [couch] portion of the day's session, Goldsmith and I were about to head up onto another level of his home when, unexpectedly, via context of our conversation of Mad Men's Don Draper and randomly noticing the throwback credenza and appropriately analogous antiquated blender, I, we, had no choice but to whip up an impromptu homage, of sorts, to the program.

Nerd alert. It's about to get all technical up in here so if you had your fill of fun then I bid you adieu. If you are thirsting for the opening question and are yearning to learn how to create such photographic brilliance as seen herein then go pee, grab a cold beverage, preferably the adult kind, and join with me where shit gets real geeked out. As if I hadn't gone there already. HA!

For this subconsciously Andy Warhol inspired quadriptych, how do you hypothesize these four different lighting scenarios were achieved without setting, resetting, programming, reprogramming or touching anything, for that matter, besides the shutter release?

If you weren't paying total attention, I copied and pasted that opening sentence. Just saying. Gotta keep you on your toes. I know I have the attention span of an amoeba on coke, so there's that. No worries. A lot of words pour out of my fingertips and you think I have the patience to proofread these posts? No fucking chance. I'm the writer, not the reader. The creator, not the consumer. That's how I rationalize it anyway. There it is, or was, today's digression.

The only thing that was premeditated (walking from the couch the dining room) for this portion of the shoot was the gels. And not the color correcting or balancing gels. Oh no. I went straight for the colorful cinematic Rosco gels. Think Mad Men vibe on Sustanon 250.

Everything else came later.

Suppose I can't string you guys and gals along any further without giving it away, the look that is.

Reverse engineering the quadriptych, what do you see?


The first two bullet points need no explanation but that third one. It's why we're here today.

Some of you, those with experience in off camera lighting, expressly, those with wireless triggering technology would quickly deduce that I'm using the creme de la creme Pocketwizards or other competitive transceiver producing brand. Or, you know that I currently work with the Nikon D5; state of the art image making technology. Either way it's gotta be some fancy schmancy programming that allows for the systematic, sequential triggering of allotment of strobes.

Quite the opposite actually. Here. Let me share with you the lighting diagram so that when the answer is revealed you can have an easier and visual understanding of the scene. 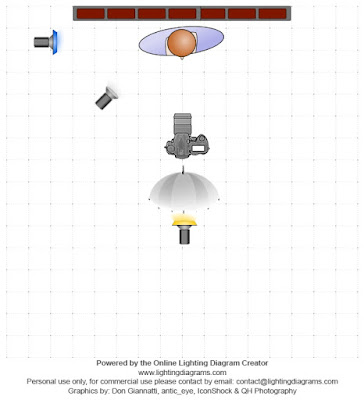 I'm like your senior prom date, aren't I? All the hope in the world that you're gonna fuck only to end up getting jerked off, and only in the proverbial sense.

No worries. I promise a happy ending. Pun  100% intended.

At the end of the day, each and every light can theoretically play multiple roles at various intervals: key, fill, kick. Sort of.

Intentionally, the brollied, full orange, not CTO, but pure orange gelled strobe, directly above and behind the camera was to be the fill and vibe of the scene.

Correspondingly, the bare bulb acting as the key and the full blue flash, an accent/background/kicker/whatever for shits and giggles.

Simply splashing the canvas with color to arouse emotion. 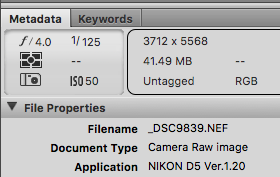 Here's a peek at a screen grab out of Adobe Bridge. The ever elusive exposure triangle. For certain reasons I don't export the file metadata in final images; only copyright info.

Regardless, as most things in my life are as transparent as a hooker's high heels, most of the work I share throughout this blog and like this post, the photographic black box is opened for all to see.

f/4.0. When depth of field is not a critical concern for the scene, often and in my typical OCD-like fashion, I often aim for that particular lens' sweet spot. Nikon's 24-70 2.8G ED is said to hit that mark at or around f/4.0. But don't take that to the bank as every single lens element, even in the same lot of glass, may vary to even microscopic degrees which can deviate the results one way or another. Bottom line? Just get out and make some cool shit and don't get hung up on specs.

ISO 50? Yes. Suzy Greenberg's amazing sensor, that's my Nikon D5, can get into those amazing double digit sensitivity levels and upwards and over the 3 million mark. Best low light camera on the planet. I shit you not. Now is ISO 3,267,800 usable? Sure if you're CIA working on the desert in new moon pitch black environments. As for artistic photography, unless the preposterous amount of noise is your vision then I'd keep it down a few stops. Personally, I've hit the 6 digit mark with the D5 and found the noise to be very film like and acceptable. At ISO 50 the files are cleaner than parasitologist's balloon knot. Just saying.

Now the Shutter speed on this set was precisely calculated concurrently with the Aperture and ISO to kill the ambient enough only to allow the set of overhead antique bulbs to kiss the sensor and make themselves known without contaminating the scene and without clipping the highlights and simultaneously allowing the strobes to do the rest of the heavy lifting. If that was a run-on sentence then, well, oh well.

In the lighting department and this is when and where you should use your Ethan Hunt skills to answer the burning question: how were four lighting scenarios achieved without moving anything but an index finger releasing the shutter.

The bare bulb flash is or was the Yongnuo 568, a very affordable and yet beefy piece of lighting equipment.

The blue and orange gelled heads are both Vivitar 285HV strobes. The Vivitar is the same design as when it was released around the crucifixion of Christ. Big. Ugly. Cheap. Reliable -- Somewhat.

Comm between flash heads and Suzy Greenberg were the industry standard Pocketwizard Plus ii transceivers. Although the Plus ii's are getting a bit long in the tooth, they are the tits; more dependable than a dope junkie calling his dealer at the ass crack of dawn. Ok, I'll try to hold back on the corny analogies. Too late for that I suppose.

After last looks it was time for Goldsmith to take the stage. From simply having conversation with me to sipping Macallan 12, a fine single malt, straight from the bottle to grooving to his latest release, "All Weekend", nothing was out of bounds.

While spraying and praying is not my mode of shooting, this deserved Suzy's continuous modes. With the horsepower that the strobes put out comparing more to a Fiat than an F-150 (couldn't help myself), Suzy's ludicrous peak of 14 fps would have made those heads, especially the Vivitars, explode. I took 'er down to 3 or 4 fps if I'm not mistaken.

And then like John Cusack meeting Kate Beckinsale (get it?, Serendipity?, the movie?, eh, never mind), I began to notice in no particular pattern, strobe after random strobe began to misfire. This was nothing I didn't expect and while I simply chalked them up as delete files, I directed Goldsmith to continue his action.

At the end of the first round it was time to review some of the shots.

And then it happened; that serendipitous moment.

OMFG. It didn't hit me at first when scrolling through the D5's gorgeous touchscreen display. No. In fact I would even mutter to myself, one after the next, "misfire, misfire, misfire." And then the randomized but reoccurring events became cyclical and more sequential in my consciousness.

People. It's straight out of camera. 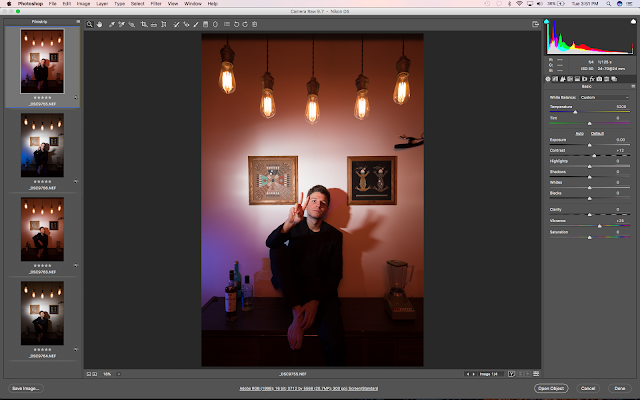 Dudes. Dudettes. Seriously?! It's even hard for me to believe but look at those RAW adjustments. Probably didn't even need to make those tiny shifts. That's a RAW profile that would make Dan Winters jealous. Sheeiiiittttt.

Yes, that may be a made up word but I use it often in these posts.

Any piece of advice I could offer here would be about breaking comfort zones, crushing inhibitions and PLAY.