Technique :: GOLDSMITH and our collateral works with the "All Weekend" debut [Shoot/Location/Look 1.1.0] 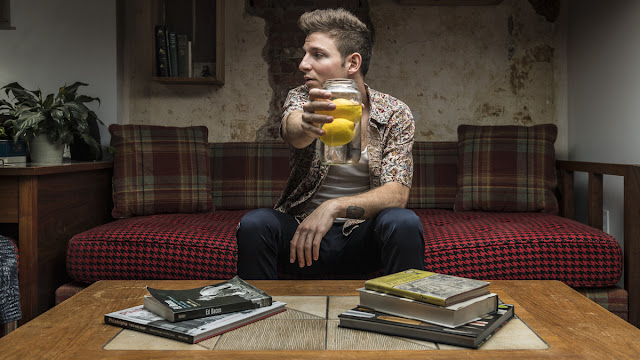 That's one mouthful of a title isn't it?

It's been a while since we chopped up pure photographic approach, primarily lighting scenarios sprinkled with some other nerdilicousness.

Speaking of dissection, our subject is hip-hop artist Goldsmith. As of late and probably why you missed my literary works these last few weeks, Goldsmith and I have been very busy, he in front of and myself behind the lens. Having said that, with the many different looks we produced, I will be teaching you the ins and outs and the hows and whys each styled photograph was created, across this and several forthcoming articles. Be them consecutive or not, well, your guess would be as good as mine. 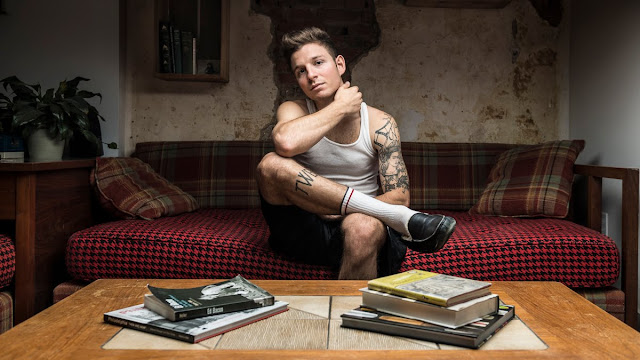 While you can gain lots of intel about Goldsmith and our earlier adventures [here] and [here], the artist has grown exponentially over a relatively short period of time.

Like Frank Sinatra to Capitol Records, Goldsmith, has piqued the interest of more than one major label. I don't think that analogy made any sense whatsoever but I think you catch my drift.

With his latest release, "ALL WEEKEND", gaining more attention than a priest at Chuck E. Cheese (yes, I really said that), the musician's management dropped the hammer; time to get the branding and EPK (Electronic Press Kit) imagery ball rolling.

BTW, i'm certainly no curator of rap or hip-hop but fuck me sideways "All Weekend" is catchy as hell. You'll see. Just one of those tracks you can just listen to over and over again. Literally made me think of DJ Jazzy Jeff and The Fresh Prince's "Summertime". 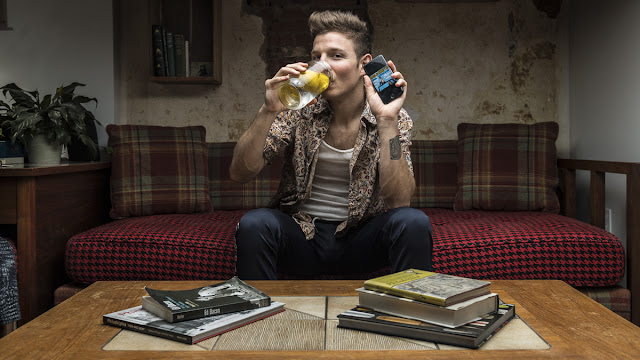 And that's when I was summonsed to lunch with the team at Continental Midtown to discuss creative.  After the smoked salmon was in my belly, the is dotted, ts crossed, all was a go.

The idea is to paint the story of Goldsmith's rise in the truest fashion possible but with refinement and elegance.

The truism will be born out of his, our, hood; the 19125 in Philly. I call it the 19125 because of the many recent debates of monikers and their boundaries; Fishtown, Kensington, Fishtown Proper, East Kensington, etc. Goldsmith will model not only in his own home, studio and local streets but we will also work to get the vocalist/producer into and work with local businesses as they are incorporated into the photoshoots.

The refinement will be born from my creative intuition.

Location One :: HOME
Look One :: COUCH 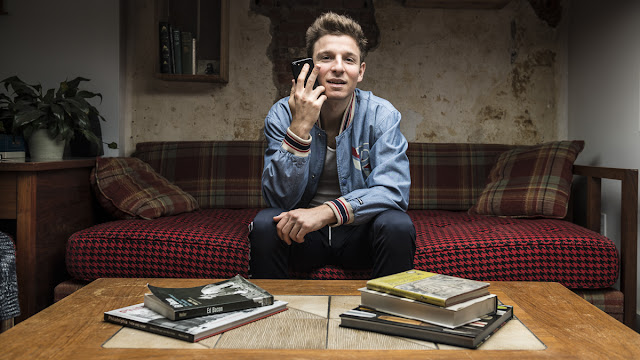 As mention, while this is the first of more locations, and since we cranked out multiple looks, I will share these how-to adventures over multiple posts so that we can focus on each technique individually.

While at Goldsmith's digs, just a few blocks from my own, I was immediately drawn to the custom made couch, its color, depth, and surrounding environment including the coffee table.

My gut howled One Point Perspective. Those same bowels inspired the gray matter in my right hemisphere to continue down that path going forward as much as possible for the entire EPK production. But, that's neither here nor there so we will play that fiddle as we progress. In the meantime, at the Goldsmith bungalow, I made note of a couple spots that would be down with OPP. Yeah, you know me. [You either got that or you didn't.]

One thing led to another and slowly but surely a cinematic, yet doucmentative (don't think it's a real word) vibe was finding its way onto the canvas.

Lighting. Because Without It There Would Be No Photography. 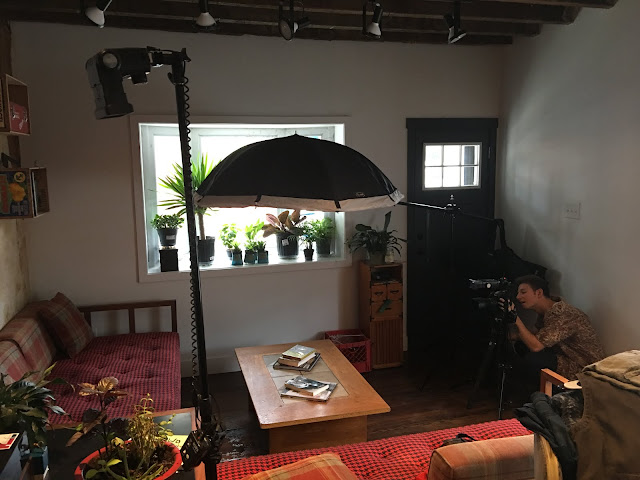 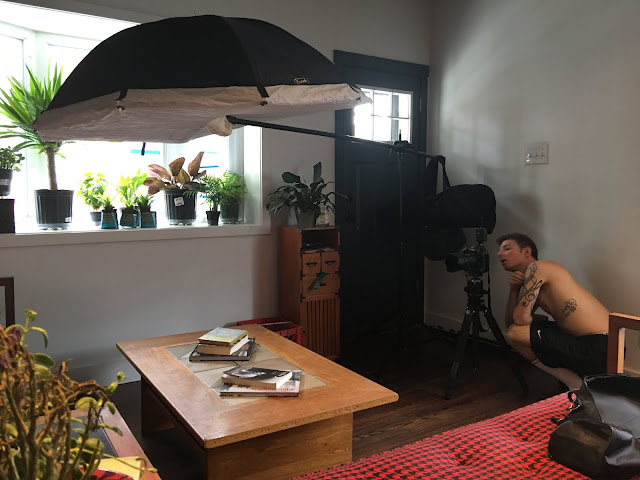 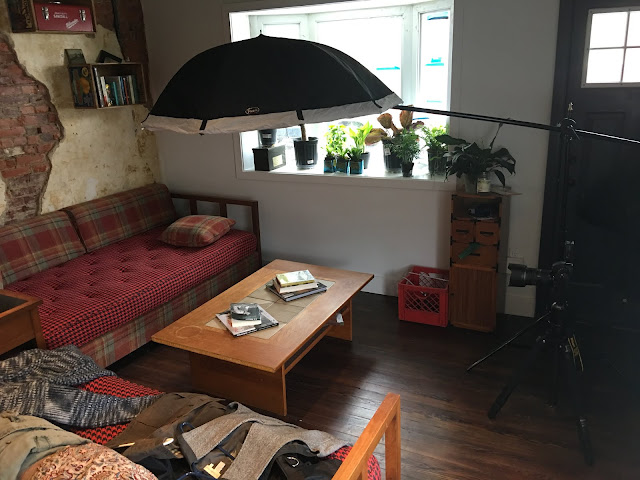 It was high noon when we began shooting. There were windows facing southwest (shown) and northwest (not shown). Could that natural light have been used for the session? Absofuckinglutely. Especially shooting the beastly Nikon D5 with the best low light sensor on planet earth, I could've cranked the ISO till my heart's content and made my life much easier . . . . . and less interesting.

Instead, we would set the mood as more of an evening like vibe. Drama. Killing the ambient entirely and painting the scene only with my bag-o-strobes.

I varied between two setups. Basically the same but some with an added kicker for the plant, camera left. 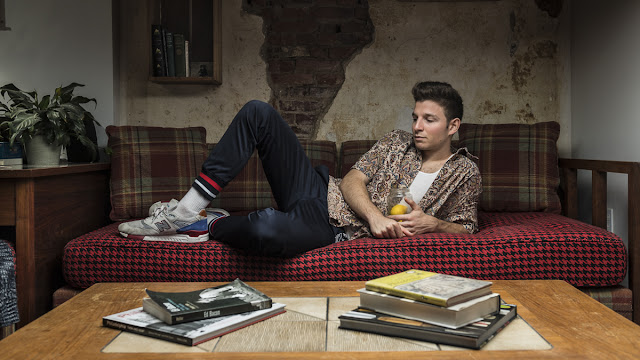 As for the workhorse. I dusted off the ole 60 inch Photek Softlighter. FYI, if you're into this kind of trivial knowledge (I am), it's Annie Leibovitz's goto modifier. Oh boy, here comes the digression, the rant.

Positioning of this key light is how the drama was created.

I opted to boom the key directly overhead. Why not Rembrandt? Why not short sided? Why not broad sided? Besides keeping it symmetrical to go with the OPP, Idk, this type of lighting is kinda in vogue at the moment. Yes, even lighting scenarios go in and out of style.

As for that drama. Refer, finally, to those BTS phtotos. 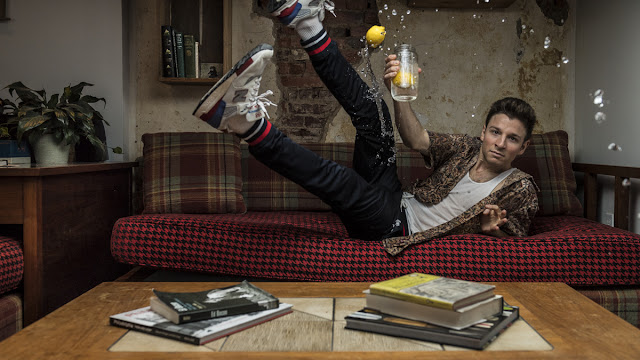 Notice that it is centered over the coffee table and not over the couch? On purpose people. See how our model, Goldsmith is wrapped in a glow of protons and how those particles and waves (light is both) feather down, or up, that back wall? Drama folks. Bam.

Learning lots of new words hanging in the hip-hop scene. So out of my comfort zone; refreshing and exciting, nevertheless.

As for wardrobe, obviously we worked in a few different looks. Typically I prefer the talent in solids more so than prints but that button up caused a huge paradigm shift in my world. Sold.

In the direction/posing department, as per usual, I try to simply get the models to chill. If either of us isn't having fun then it becomes work and who wants that? Not me. Sure I take what I do very seriously but if my heart isn't smiling then I'm in the wrong biz.

As earlier mentioned, maybe even twice, there will be a few more installments of these shoots. Each with their own look and very different photographic approaches. Lots to be learned people. Stay tuned.

Oh, as I know I get a bit wordy in here . . . Funny thing. In person I'm a man of very few words; a listener, an observer. But get me on a keyboard? FML, I can't stop. So antithetical in fact that some have a hard time believing that these posts come from my fingers.

You see? There I go again.

As the new articles arrive, I'll try to remember to link back and forth for ease of maneuvering.