You WILL Be Alive To Shoot The Next Total Solar Eclipse :: Here's How I Did [And Didn't] Do It. 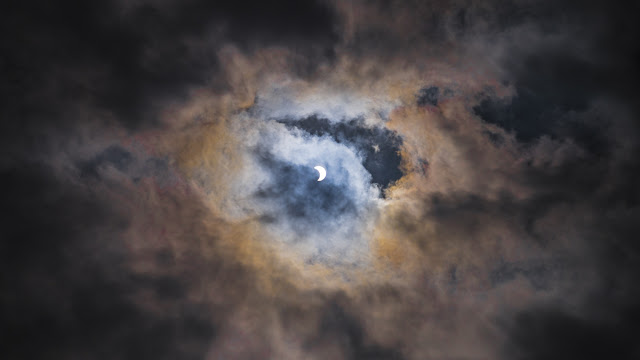 You hear a lot of folk blubbering that the next big total solar eclipse will be well beyond their lifetime, in the next century. . .


First of all, you can get hit by a bus and kiss your ass goodbye, like, now. Second, if you really fell in love with the totality eclipse of 2017 and never plan on leaving your front porch then you are shit out of luck. On the other hand, if you are dig celestial events and have a sense of adventure, then you're in luck. The next total eclipse of the sun is right around the corner, July 2, 2019, in parts of Central and South America.

It makes sense. Not too long ago, before today's transportation technology existed (planes, trains, automobiles), the end didn't justify the means to seek out these celestial events, unless you were an astronomer. No. That's probably why most commoners cherished that once in a lifetime experience.

Today, unless your pilot is dippin' out due to his heroin addiction or the plane is hijacked by ISIS, it's fairly quick, cheap and easy to hop on a plane and get to most places on the globe.

Before we move forward to the creative and technical stuff, the real good nerd stuff, let's not count out a very large population that we may have overlooked in this opening ::

Those that just don't give a fuck. And bravo to all of you. Seriously. I respect that. Before becoming a creative, odds are there were an eclipse or two that I may have paid little or no mind to.

My how times have changed.

About a decade ago I became obsessed with creating artistic visuals with a camera.

About 6 months ago blips on the social media radars began to pop up; blurbs about the August 21st total solar eclipse.

Hmmm. Interest was sparked. Although it's not my niche, I've done some unique landscape type of works and boy would this semi-rare event be a great opportunity to work and create well outside of my comfort zone.

Not being a total dolt, I knew preparations and precautions would have to be made and taken, respectively.

The beauty of the Internet of today is that as quick as I became interested in the event, there would be little or no searches needed for information as the content being served to me on social media feeds were already tailored to these interests. Yummers. Hey, some call it Big Brother but my hat's off to this tech. Really, I prefer seeing ads and info about things I actually care about than the old days where commercials didn't scrutinize as much or tried to with much less success.

Solar glasses for my eyes. Solar filters for my lenses. Warning after warning. Blindness. Fried camera sensors. None of this reassuring. Look, in all honesty, the days leading up to this eclipse gave me frequent erections but don't think I'm so aroused that I'll fly to Argentina in 2019. But you never know right? Either way, investing in decent solar filters was not in the budget.

In either case, the event was still months away. Plenty-O-Time to procrastinate.

Those old school looking cardboard eye protectors? Once selling for $1.50 were going for over $100 a pair on Ebay!

Solar filter? I began to get religious (again) and pray that a UV, ND and Vari-ND stack would be enough to protect my Suzy Greenberg's soul. That's my Nikon D5 for those who don't know.

It had to be 7:00 am the morning of and I was spinning my wheels.

Innovative as a creator I know how to be.

And then I pussied out. Sort of.

Putting my Suzy at risk was, well, just too risky. Sure she's insured but there was a headache I just didn't wan't to endure.

I opted to play it safe and rig up the iPhone. A fried iPhone I could live with. 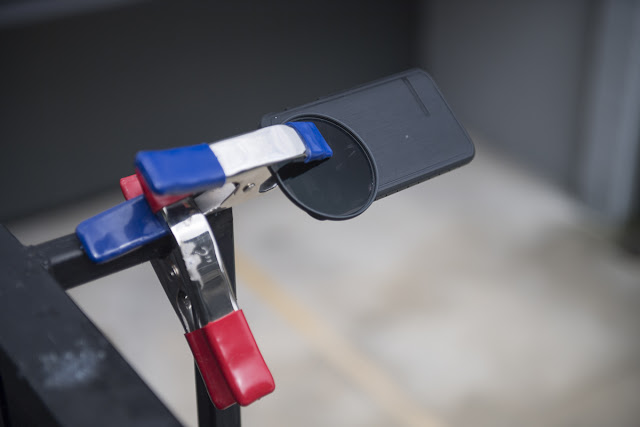 As for Harper and myself? Oh, Harper, my daughter, aka H™,  was working as my assistant on this momentous afternoon. Filters for our eyeballs to save us from the fireball in the sky? Along with Harper's pair of Ray Bans, I rocked a pair of my wife's very very old shades. Why Stefanie's glasses? I don't wear sunglasses, ever. Basically, in the protection department, we were not prepared, at all. However, I did have a cooler packed with delicious snacks for me and the child.

Relax people. Before calling DYFS, in no manner would I even have though about putting my daughter in harm's way. In fact, along with her sack of chilled fresh veggies, she had on her blades with an umbrella perched overhead as she lounged on the chair, under trees, totally uninterested and distracted while drawing and working on ABC Mouse (I highly recommend).

The option would be Time Lapse mode. I began filming at 1:15 ish, about five minutes before the moon was to make her move.

1:21 arrived and the eclipse was officially underway.

As you may know, at high temps, the iPhone will shut down with the associated prompt. Luckily I checked just a few minutes after inception and saw it was certainly hot and and locked.

To speed up the cooling down of the iPhone, I um, stuck it in the cooler with the ice packs and cold cherry tomatoes.

This cyclical process went right up to and past 2:44, or 79% totality as it would be in Philadelphia.

It was a big kick in the cunt when leading up to that glorious and most photographic moment a ginormous cloud found its way over the city.

Hopefuls across adjacent rooftops, like myself, kept the faith as long as we could. And long in this case ain't long at all as the clock is ticking.

Another check to see how the device is performing and although interesting due to awesome content, I was underwhelmed by the results.

Walking past a neighbor who stood lifeless while holding proud, the pinhole camera he made, I dropped my head as if defeated by those fucking clouds. Before going inside I glanced up.

This neighbor, whom has lived next door for damn near a year and I still don't know his name, grabbed my attention. With body language I could deduce he wan't to know of my results. For the umpteenth time I replied that 'although I'm a professional photographer, I'm not an astro-photogrpaer and do not have neither the proper solar filters nor a long enough lens to warrant the risk to my gear'.

I could've, should've, vomited on myself right then and there.

In about 90 seconds, I ran into the house, sliding across the bamboo floor as if I were Tom Cruise in Risky Business, put H™down for a nap, grabbed Suzy dressed as she was wearing a 24-70 2.8 and a 77mm Variable ND filter, the baby monitor and back onto the terrace. 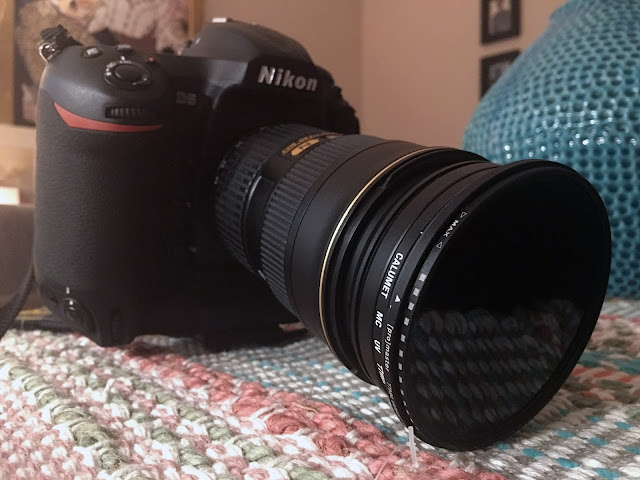 Passing the pinhole bearing, clobbered soul, I announced, with Suzy in hand, something along the lines of, "hey, you only live once, right?".

Back into shooting position

Most would think that's a pretty shitty set up for shooting celestial bodies as would I. Closeups of eclipses are often done with super duper long glass. This is where as a creative you must innovate and think way outside of the box.

Rather than the eclipse being the entire composition, it would play one role as a character in a bigger story.

With the ability to crush the ambient with exposure only, the Vari-ND really wasn't needed but I felt it added a layer of protection over the UV filter in case of any cosmic dust or some other bullshit thrown at us during this event. You know, all the bullshit the news and other media were falsely scaring us with. But better safe than sorry for sure.

the clock was doubly distressing. Not only was the event itself was gonna exit stage right, or is it left, but looking for sparse breaches in the clouds was simply a formula of preparedness and probability.

So how was it nailed? The opener? The fundamental reason that I'm writing to you today? Let's dig in.

Envision elaborate proprietary astronomy gear with Nerdy dudes with pocket protectors and solar glasses that more resemble an old woman post cataract surgery than a pair of fly-ass frames. SLR gear mounted to telescopes that look like they weigh more than their operators. Six figure sets of sticks (yes, on purpose alliteration) designed by Elon Musk and made for Mars. Remote midwest locations that don't appear on most maps. Real dusty places.

Alrighty, maybe that's a stretch but I'm certain you catch my drift. And probably not that far fetched.

Ok, if that was my bag, I'm sure I'd be right there with them but if you know this blog and my style and already mentioned, MAM::P is king of improvisation and pushing and pulling boundaries, intentionally or incidentally, uh, where the fuck was that going? Aye Dios mios.

Aside from being a total nerd, everything was different.

Deep within the city limits of Philadelphia, stripped down and strapped with pure minimalism, instinct and those 10,000 hours that had already been put in. No time to set up the tripod. No time to open the bag to swap out glass. No time to rocket blast the sensor or shammy the elements.

Against my camp of shoot Manual, shoot Manual, shoot Manual, on this occasion, while working with the variable ND filter coupled with strange and unusual events in the sky, Auto-ISO seemed to be the way to go. This allows for full control over speed and depth of field. With the Nikon D5 sensor being the world leader in low light performance, I have full confidence if in this setting that the ISO starts to head to heights of the sun, if any visible noise at all, it will be totally film-like and aesthetically pleasing.

As for that VND (variable neutral density) filter. Pretty sure it was at the minimal setting, stopping light down by maybe 3 stops. Don't quote me on that spec though. Total guesstimation.

Post? Of course. But nothing in Photoshop specifically. Every adjustment was made in my go to stills editor, Adobe Camera RAW. Colors where pumped or depumped but nothing there that wasn't there to some degree.


[NOTE :: In no way does this article advocate looking at the sun in any event, without the proper, certified eye protection. Further, using any photographic equipment without the proper, certified filters is also not recommended. Finally, do not try to accuse Michael Anthony Murphy and any of its subsidiaries if you do not heed these warnings, ending up with eye or camera damage.]

People, you gotta know that when you read any sanctioned article or view any sanctioned video about the viewing and/or photographing an eclipse, that they are covering their asses to the fullest.

One idiot goes blind and blames it on a media channel that didn't properly warn him or her and, you know the rest. Cha ching. And that ain't my favorite dim sum restaurant my friends.

But, without being a total fucking nitwit, calculated risks in life are often essential for individual growth.