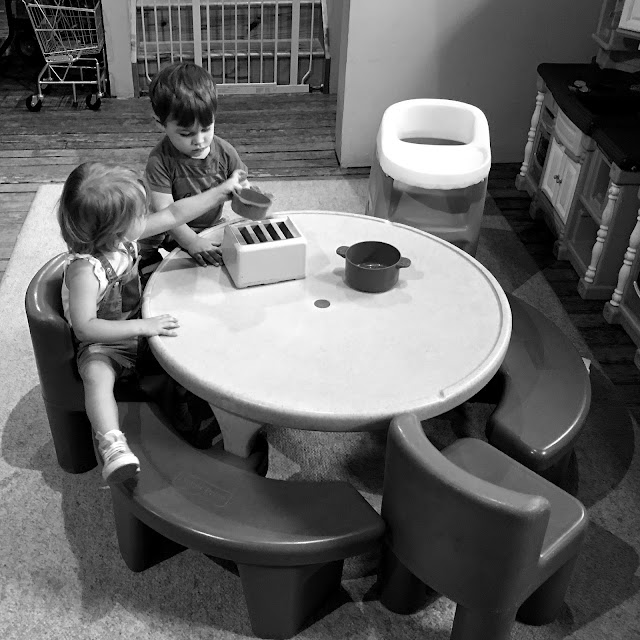 This morning, as per usual, I took my daughter Harper to playgroup. About an hour in and after one toddler pissed me off and after one mother's same ole bullshit story helped my eyes glaze over and after I finally found my way to a comfy chair to enjoy my first coffee of the day, I stood up and really, really paid attention to the children's social interactions. And then it hit me like a ton of existentialistic bricks.


It was about 7:00 in the morning. The skies on this spring, or is it summer, day were dreary; gray and overcast. A storm a brewing for sure or at least I'd hoped. A quick nugg about me, I'm a sucker for inclement weather. Thunderstorms, hurricanes, what have you, they all bring peace to my soul. Blizzards? Fuck yeah. Maybe the best mother nature can throw at me as there's nothing like fresh powder under my skis.

Well, let's just say that that added darkness in the bedroom was luring me to stay in bed, enjoy the pending weather, windows open, along with an old film. Playing hooky was starting to become more than an idea.

But it's not about me is it? Harper (H™) and her needs come first.

So I drug my ass into the shower, realized after being doused with the warm steamy water that I was out of shampoo and had to exit and run all the way to our other bathroom to grab and run back. The worst right? I know. And we have really long hallways in our home. Oh yeah, and I keep it like an icebox in regards to the AC in the house. Those variables make the haul all that more treacherous.

Vital intel for the story? Not the least bit but thought you'd enjoy the narrative.

After packing up little H™into the Xterra, we hit the road. Ok, sometimes my needs are first. Having said that, we hit the cafe for that much needed daily cup of Joe; the first cup of the day.

With playgroup starting at 10:00, we pulled up and found a front spot at 9:53 on Montgomery Ave. Nothing like prime real estate in the world of urban parking.

"By My Side" Neighborhood Parenting Group is the official title to the establishment, I think. The space is on the property of Atonement Lutheran Church. Not sure if they are related in any way but, well, not sure there was a point there just wondering if the playgroup space is rented or if it's all one operation. Teri, the director, doesn't really mention mass or anything, at least not when I'm trying to pay attention. But who knows. Again, irrelevant. Or maybe it is as you may in fact be searching for a playgroup in Fishtown, Philadelphia. If so then I obviously cannot help answer any questions that might apply.

The church and its adjoining properties, if you didn't catch, are located in the heart of the Fishtown neighborhood in Philadelphia.

Although I've never been in the church itself, By My Side, the playgroup location, brings back memories of my childhood in old creaky Catholic schools and churches. A large open space with original hardwood floors. Scattered about are a few cages and aquariums with your typical animals to fill; turtles, bunnies, goldfish, etcetera, etcetera, etcetera.

H™ and I were the first to arrive. After placing the "donations" in the jar and signing in on the iPad, Harper runs for the toys and I the cushioned rocking chair. As sitting is the new smoking, I usually pace around the space while observing my daughter. On this day though, the body was dragging a bit, had to park the caboose.

One by one, the little fuckers trickle with their parents. Little fuckers? Actually, I'm totally cool with those toddlers so let me reiterate by saying one little fucker. Why? Eh. Without being too incriminating, I'll just state that I wanted to upper cut one of them and right hook their parent.

Full transparency, that little fucker that little toddler, in sneaky fashion gave my H™an elbow shove to her gut, knocking her back to the floor after my Harper simply tried to befriend and play with this child. Worse, I know the parent saw and looked to see if I saw which they weren't sure if I did or not so they decided to pretend not to have seen and did not say anything to their child. Hey, I guess I could go all out here because if that person reads this and approaches me then they would instantly incriminate their self. Ain't it great to have that much leverage??

In the end, doesn't really matter as this isn't about that and we are all human and act and react diffidently in different circumstances. I'm no hater. Nothing but love for both of them although I do like to vent. it's cathartic. BUT it does all connect the story. I swear on that other toddler ;)

Needless to say, my alertness and spatial awareness for my child were off the charts. Not so say that they are ever sub par but, shit, you know what I mean. Let's just understand that I was back up on the soles of my Chucks.

About 40 minutes into the session, I really began to both subjectively and objectively, if that's possible, analyze how myself and others nurture mine and their children, respectively.

This sharing thing is astonishing.

Stay at home mom or dad, working mom or DADAPRENEUR, parent or no parent, brother, sister cousin, aunt, uncle, grandma or grandpa (did I cover everyone?), everyone knows this fundamental cognitive comprehension of sharing.

Funny thing happens at this and I'm certain every playgroup, pre K, playground and Kindergarten and upwards to some degree or grade for that matter. As quickly as we see one child approach or be approached by another that either has or sees something that interests similarly in the other, we as the parents are hardwired to start preaching the goodness and significance of this sharing thing.

Totally wrote "hardwired" in that last sentence and it was not premeditated but another phrase couldn't have been more spot-on.

But is there anything amiss, that pipeline askew?

It got me to thinking, all while this is going on around the room, simultaneously.

I recall while driving a brand new loaner four door F-150 while my Xterra was being maintained . . . Ok, just had to slip that in as I freaking love that truck. Soooo roomy. Perfect for a big dude like myself who also lugs around big bags of gear.

Where was I? Oh yeah. Driving that beast I was listening to an interesting Grant Cardone podcast. He mentioned many contradictions of childhood lessons learned and how they contrast to his life as an adult and entrepreneur.

What contradictions you ask? A couple for instances if you will my friend to butterly segue back into the life of my. I made butterly up. Not a word. Not that I'm aware of anyway. Look it up.


My brain came back to the play space and I again took a seat on the comfy cushioned rocking chair. This time neither out of sluggishness nor relaxation but of laser focus and unbridled, out of the box reasoning . . .

Why do we push this sharing thing so much? Does this value hold any weight on the world of adulthood or more, the world of success and attaining such greatness?

Let's dig in a little deeper. 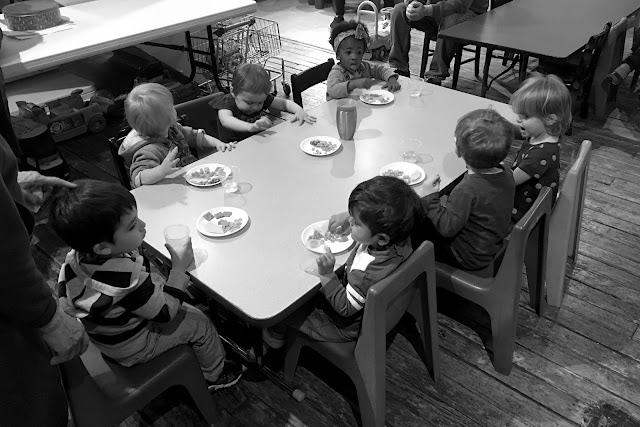 And let's throw in a big preface that our sharing on social media is not the sharing discussed herein for obvious reasons. Bigly, social media sharing is just posting and reposting some iteration of yours or someone else's life how it is to be specifically interpreted and/or perceived by the audience. Layman's terminology :: It's all bullshit. Mostly anyway. Except for the stuff I post of course :)

Certainly we all share the abstract stuff like emotion, feeling, thought, et.al. but what about the concrete material items. And I ain't talking about sharing a seat on a bus. I'm talking about those big ticket items, relatively speaking, that your life would be hollow without; your toys.

Back to those toddlers. It's all about the sharing of toys. Of course there isn't much more to their lives at that point. The only other thing besides pooping and mommy and daddy that serves any real significance in their growth is FOOD.

I haven't been a dad for a long time but thus far and via careful observation, pointedly at Harper's playgroup, I came to a paradoxical hypothesis ::

Crazy shit right? I couldn't wrap my head around this.

Survival is the number one priority of carbon based life on our planet. Yes even plants are carbon based and yearn to survive whether they are conscious of it or not. The primary pathways to the success of SURVIVAL are to eat and not to be eaten. Basic Darwinism at its best; survival of the fittest.

Point is its as if these children have this intrinsic instinctual (don't think thats' redundant) awareness of the gravity food holds in their lives. Also, we as parents, and again maybe it's hardwired to some degree, in social settings like this playgroup, aren't exactly promoting those tykes to share their neighbors.

Hypothesizing to an even greater extent, and I swear I didn't smoke weed or anything while writing this, let's for a moment analyze us, the grownups.

Not needing to point out the indisputable fact that food is the center of most, if not all, social events in our lives, from weddings to death, what is it in our subconscious that clicks like a switch when it comes to breaking bread with another when as toddlers we were, or are, so penurious.

I'm not anthropologist although I do consider my self to be philanthropic, I'm thinking back to those innate survival skills; eat or be eaten. Don't die.

Babies and toddlers haven't learned the concept of negotiation. H™loves her cheese and nobody, not even here best bud Lola better fuck with it.

We as adults know not only how delicious but how important that cheese is for us to go forward and no matter how close we keep that cheese to our hearts we also know that the other part of that formula for survival could be very real and quite possibly pure time has hardwired us to share that cheese with the enemy as not to die.

I gotta wrap this up for now. As playgroup and food continues in our lives, I will be back to report more discoveries if not about sharing and its place or displacement in society, then defiantly, yes, defiantly, something else that will ruffle your feathers.

What do you think? What does it all mean?

Have these words opened your eyes to a new reality or have you emotionally shut me down to these new possibilities?

The comment section is up and running again. So please feel free to expound or tell me to fuck off or whatever floats your boat. I'll love you no matter what. In fact, let's do lunch ;)

My friends and/or foes, I told you this new DADAPRENEUR sub series in the blog would be nothing like any other parenting tired old bullshit that you see everywhere else in this noisy sea that is the internet 2.0 bubble.

No works cited. No references. Just bringing it pure and natural. Could it all be wrong? Absofuckinglutely!!!