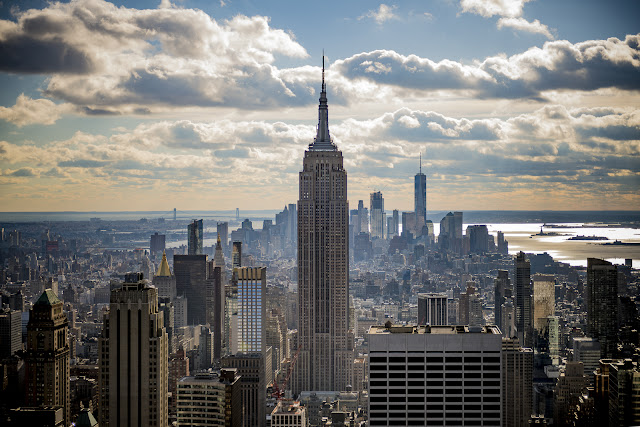 You would think shooting the New York City skyline is like shooting fish in a barrel, right? It's the most magical and mystifying city on the planet, right?

While you are sitting in traffic on the New Jersey Turnpike, able to barely spot the city on the horizon with its iconic concrete pillars scratching the sky, premeditating the awesome creativity about to spill from your gray matter onto your visual recording medium, guess what? So are 1000 others at that very moment, in that very traffic jam.

Now, multiply how many moments in a day, a week, a month, well you get the point. There's a whole lotta moments and a whole lotta photographers; pro, advanced amateur, hobbyist, tourist or just straight up phone snapper on the way up to their 60th floor office on Wall Street, all just wanting to capture the majesty, in their own uniquity, that is New York City. The result? A lotta the same ole shit. Mundane.

While headed up the elevator to the Top of the Rock (the top of Rockefeller Center), and I'll come back to this, a recent Adorama TV episode recollection from, "Top Photographer with Nigel Barker" hit me square squared to the tenth power and cubed, right in the face.

The photographers were given an amount of time, on a private balcony, higher than the observation deck, at dawn to shoot their artistic interpretation of NYC.

Long story short and not to discount the following words since they were the words that hit me in the face like a upper cut from a bipolar Mike Tyson.

Forgive my forgetting the names and my laziness not to search them at the moment. Just go watch the series. Only five episodes and pretty good. I digress.

One of the photographers was being critiqued on his cityscape and boy did his jaw drop. The dude doing the critiquing told him that his photograph looked like any Google Maps 3d image of NYC. What a kick in the balls right?

Yesterday morning. Look. it doesn't really matter if you are reading this the day I published or next month. It's all relative.

Yesterday morning, Stefanie (wife) and I were awoken damn near 5:00 A.M. on a day were neither of us had urgent work to attend to. Basically, we could've slept in. Awoken by whom or what? Well that'd be our super awesome daughter of course, H™ (Harper Thomas Murphy). Hey, she's only a year and a half old. Hey, that's what toddlers do; wake their parents during the best of parental slumbering.

Around 8:00 Stefanie asked if we should take a day trip up to New York City to do some pure touristy shit for H™'s sake. You know, FAO Schwartz and the Christmas Tree at Rockefeller Plaza, shit like that. Ok, so time is relevant for the article as it is now obviously the holiday season. Fuck. Well, imagine reading this if you missed the day of publishing that every day is Christmas as it should be. ;)

Oh yeah. So we decided to hop in the car, with child and coffee, lots of coffee and head up to Manhattan. From Philly? It's a hop, skip and a jump; about 90 minutes to hit the Holland or Lincoln tunnel and from there on in all depends on traffic.

Normally, we, being less touristy as Stefanie and I have spend much time in New York (her past working there and my past excessive partying there), we like to take the Holland Tunnel and head into Soho where we prefer to hang out, eat, drink and be merry.

On this day, with our full blown touristy intentions (neither of us has been to the Statue of Liberty) and wanting to take Harper to the tree at Rockefeller Plaza, it made sense to head towards the Lincoln tunnel. Siri had other plans as via iPhone circuitry, advised us to take the Holland Tunnel. I was befuddled.

Heeding Siri's direction, we went in from the lower end of the island. Then we drove aaaaaaaalllllll the way up 6th avenue and then the holiday tourist traffic, yes, us being one of them, struck. Some of you are thinking that's always how NYC traffic is. Trust me. It's not. Xmas season? Yes. Off season on a work day? Not even close. I promise. Others may be thinking why we didn't take a train or at least drive into Lower Manhattan, park in a lot or something and subway it up to Midtown. My friends, fighting traffic aside, I believe I've been given a magical key from the NYC parking gods. Let's just say this :: lots in Midtown were charing $60.00 for the day and most were already full at noon. First of all . . .  FUCK THAT. Next, with my magic powers, besides taking 20 minutes to drive block to block, I rocked out a street spot at 51st and Park Ave. I shit you not. I drop the mic now and thank you. Cost? like 12 bucks.

The masses of people were as expected or more as this was a fairly pleasant day weather wise. Two years ago? No sweat. On this day though? With toddler, stroller, diaper bag, wife bags of who-knows-what and my travel sac for Suzy Greenberg (Nikon D5), this would be NO easy feat.

And it wasn't. I almost wanted to turn back and unload the camera bag into the Xterra and only work with my iPhone. But I stayed strong. Luckily, I packed light. One camera. One lens. Done.

[Note :: I'm so random but since it's fresh in my brain, this may turn into a 3 part series to show the 3 different "looks" created on the Top of the Rock. Or they may all be in this post before I'm finished writing. Who knows? Maybe I shouldn't have posted this note so soon. Oh well.]

With one person knocking half of my coffee onto some elderly woman's back of her pea coat, and another knocking it right out of the cup holder on the stroller, we had seen enough of the tree and knowing this area well enough, I knew we could bypass the crowd and head towards The Top of the Rock by going underground.

Oh, we had prepaid online. Adults are $34.00 each and babies free. Not sure to what age that goes but I probably would've lied either way to say she's a baby. Shit, when she's 10 I'll say she has that Benjamin Buttons thing and tell them she's really only 1 year old.

After waiting and waiting in line and passing stringent security checkpoints, we were in the elevator headed up to the roof of the city.

Remember what I said about the dude on the show about Google Maps? Yeah. We are back there. It a fantasy land, the observation decks (there are 3 levels) would be occupied by only my wife, child, myself and Suzy Greenberg (my new flagship, Nikon D5).

On this fine holiday season of a day, each deck was in disarray; hundreds of tourists, faces pressed up against the glass or jockeying for prime locations on the wide open upper deck.

70 stories up, the weather changes a bit.

H™ was a bit tired and getting on the cranky side while simultaneously running the span of the observation deck as if she were queen of the city; get out of her way! It was pretty awesome actually. So while trading time, equally maneuvering for positing and enjoying thephotographing this amazing landscape, Stefanie and I each took turns chasing down our rambunctious child. Needless to say, time was not on my side.

If the camera didn't come out of the sack the rest of the day, it did not matter. I NEEDED to get a few shots up there that could not and would not scream Google Maps.

If you are confused about the google map thing :: 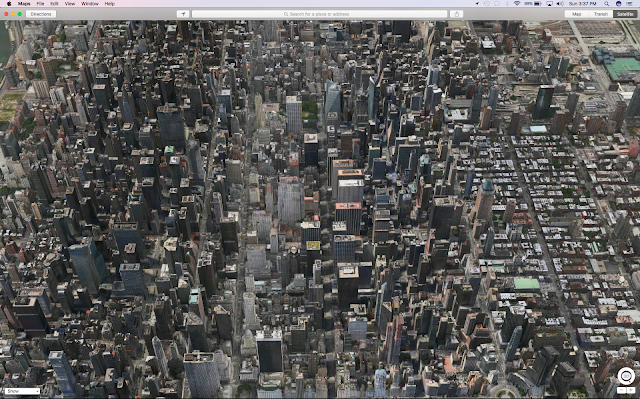 See what I mean?

This is Apple Maps but it's all the same shit. So don't break my balls.

Now it's a fine photograph. Of course this is from a satellite in space and that's the point. This unmanned craft, circling our planet, without a creative soul, is banging out photographs like this 24/7/365.

Again, a fine image. In fact, I enjoy the 3d maps probably more than I should. If your atop Manhattan and simply want to document what you saw? Great. But if you are aspiring to be an artist. To be different. You gotta step outside of the box.

What's In That Box?

People, while packing before the day trip, I too fell victim to being in that box. My left brain was already making the calculations for how I would be shooting ::


Congratulations. You just created the Google Map photograph. Literally millions of people each year ascend to The Top of the Rock each year with their expensive film, dslr, mirrorless and phone cameras. You know about how many of those same ole same ole, wide angle, wide DOF photographs have been shot?

And my friends, I fell victim to this too until I felt the clock ticking, decided to quickly regroup and find a new rhythm.

I'm going on and on. Let's get down to brass tacks.

First of, boy was I ever thankful for the clouds. IMHO, as bad as the cliche Google map shot would be a cloudless, bright blue sky. Unless you process it in post properly awesomely of course.

I was drawn to show the greatness in man made size without getting lost in a sea of faceless buildings. Central Park side was nice and could've won but wasn't able to get it centered in the frame.

The Empire State Building it would be. And bonus to catch One World Trade Center and Lady Liberty in the distance as well.

Besides the heroism that The Empire State plays in this role, it's something more, isn't it?

[Note :: Think we've driven too deep on this image alone not to create the 3 part series. The other images are soooooo different than this one.]

Secret Sauce? Not really, I just post produced the crap out of this one. These days I'm quite gentile on the post product. In fact, I'm not even sure I'm finished with this one but it's pretty close. I may call it done but gotta take a few days off from looking at it first. A good practice mind you.

I pretty much cranked . . . everything. In moderation of course ;)

Most importantly? Even though I shot in Daylight White Balance, I felt Cloudy gave a more dramatic effect.

Cropped and straighten too. No tripod people. It was run and gun.

After The Top of the Rock, I had enough. Stefanie agreed we needed to get out of this touristy nightmare and head down to Soho; our comfort zone.

I actually decided on wanting to take the family to one of my favorite New York restaurants on Mulberry Street in Little Italy, La Mela.

La Mela was super packed and didn't think knew none of us had the patience to wait in any lines at this point. So, just up the street we went to the historically famous Umberto's Clam House. It was where mob boss "Crazy Joe" Gallo was whacked, along with another mobster.

The most important part of this EXTRA?!

I shit you not.

I parked the Xterra just a couple blocks away, on Broadway, on the street. 6 bucks with time to spare.

May I drop the mic?