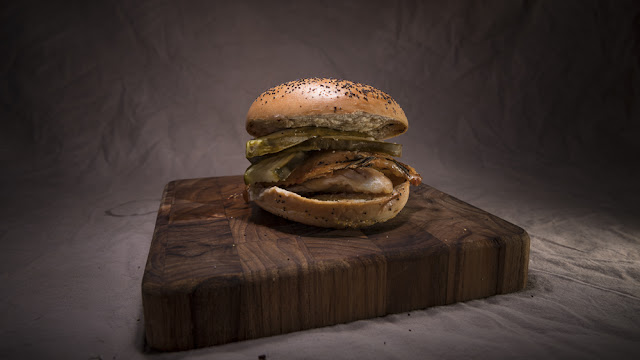 Like Cousin Eddie's 1972 Condor, the holiday's have shown up, in a big way and without any warning . . .

You know while going through the RAW files in Adobe Bridge 2017, perfect image after perfect image, I scrolled right past. It was today's featured beauty that stopped me dead in my tracks.

As I'm sure millions can relate, Thanksgiving 2016, like this photograph, although pretty on the surface, is/was filled with countless imperfections and technical disasters but when you take that big bite of it, it turns out to be full of delicious flavor and unsurpassed uniquity that is yours.

Today's Thanksgiving leftovers is just that; a cup of drama with a dash of overcooked potatoes, brought to you metaphorically in culinary and photographic design; my true holiday leftover meal. I'm a big fan of the semicolon if you hadn't noticed here or in the past. Makes me feel superior. What can I say? For fuck's sake, half the time I may not even be using it properly but who the hell notices?

[NOTE :: People. All Most of the words herein this and all most of the other posts are usually written with not cynicism but witty sarcasm.]

And I swore not do do a food photo post after the great and most recent editorial/tutorial about [Ramen].

Am I bitter around the holiday season? Certainly not. In fact I'm the hap hap happiest fucker there is when ole Saint Nick is polishing the sleigh up at the North Pole. I bring the banter around this day each year as my way of showing thanks. Thanks for the path that I'm carving and the shrubbery I'm able to see that others certainly do not on this road less traveled.

Seriously, how boring would life be without the occasional pickles?

Moving on and as we must as this is in fact a creative photographic blog, let's talk about it, the photo.

The potential was, like the leftovers in the fridge, bountiful. You like that word choice? So biblical and holiday appropriate. If I haven't already, lemme drop the mic.

Oh yeah. From jump street I knew I wanted to throw up the tea-stained muslin and dust of the ring flash adapter. The later is just really gangsta for pulling out detail when detail is on the menu. I should actually use the ring flash more often. Hmmmm.

As for the subject matter? I was not sure if I wanted to shoot my actual Thanksgiving leftover lunch or to shoot an empty can of cranberry sauce as the main subject or somehow incorporate both. Obviously opted for Sammy as the subject. Albeit I wanted to do up the sandwich in style, on a La Colombe baguette, one of the best breads in Philadelphia IMHO, the clock was not on my side so I had to make due with the poppy seed bagel. Fucking bagelry was out of everything bagels. How do you run out of the most sought after bagel known to mankind?! Eh.

The innards? Although there are stacks of Tupperware in the fridge with leftover culinary masterpiece's via my in-laws, my tastebuds craved simplicity. So, and speaking of pickles, I grabbed a nice chunk of turkey, skin on, and some slices of Kosher dill pickles. When I can't get my hands on a legit deli pickle, I opt for Clausen these days for awesome flavor and consistent crunch, with Mt. Olive coming in 2nd for their unique flavor profile.

Simple. Boring even, but just what the doctor called for.

With the stage ready for the actors, I brought in the cliche cutting board, sandwich and a beer bottle prop.

When it was time for the curtain to go up, everything looked pretty. A complex three light setup would really knock this foodie still life outta the park. running through a few different lenses for some different feels, it was during a reset that the magic, or mess, came to life,

I had pulled the (not pictured) beer bottle out of the composition and rested it on the muslin for a sec. I then pulled it away and pushed in really close at 24mm. This test shot spoke in tongues to me. LITERALLY!

The light was gorgeous. The wide distorted angle, well, it was extreme to say the least and the crooked chopping block really helped to exaggerate that perspective.

After noticing the ring mark left by the bottle, I noticed how hideous the inside of that sandwich really looked. Horrific isn't it? Is it just me or does that turkey look like a freakish human tongue hanging out of the bagel? Or take your animal of choice if I went too weird with the human reference.

Either way, the shot vaguely reminded me of those Olympians shot about four years ago if I'm not mistaken. Remember? So wrong that people thought they were done purposely like that? Well, this ain't half as bad but the wrong made me think that it was just right. Picking up what I'm putting down?

Let's get to the NERD FILE for those of you who want to get to the point. I do anyway. It's still a holiday weekend and there are some fine Belgian Ales calling my name. 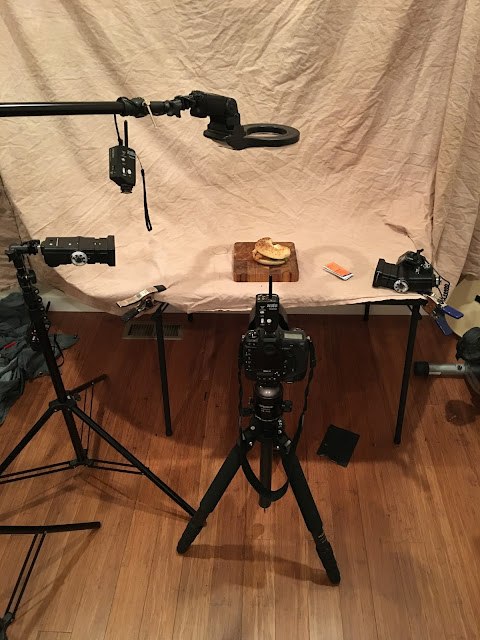 Hard right and hard left are some ugly but uber Vivitar 285 HV heads. Hey, they ain't gonna win any tech design awards but they certainly get the job done.

Boomed overhead is a Canon 430 EX ii strapped to a ring flash adapter.

All of the strobes are talking to Suzy Greenberg via Pocketwizard Plus ii transceivers.

The muslin was white and from Impact if I'm not mistaken. That is A-clamped forward on a table I got from Amazon for like 40 bucks a couple years ago. I'll link you to that another time.

Oh. In case you wanna read the other five years of rants, here they are ::