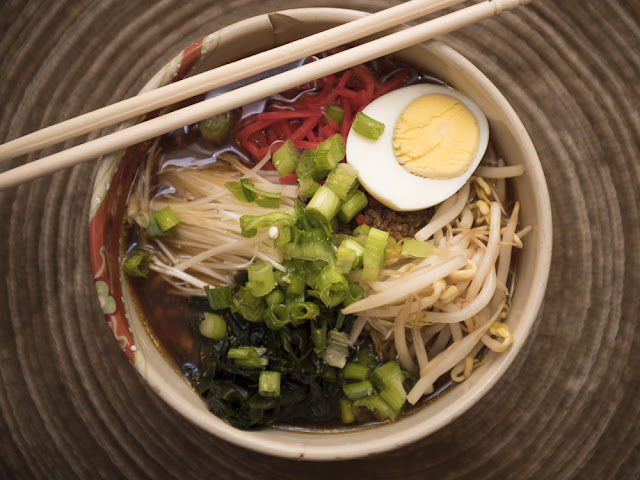 Today, on the specials board, authentic Miso Ramen Soup from scratch both culinarily and photographically. Almost anyway.

It was just so fucking good that I don't know what to discuss first, the kitchen or camera methodology.

Hmmm. Ok. I got it. Flip a coin. Perfect. You guys are just gonna have to have full faith that I'm really flipping and revealing the honest answer here.

Really people?! You really think I got off my ass to find a coin? Not a chance. Sucka! I kid.

Let's just see how this thing unravels itself as the words flow from my fingertips.

If you're a newbie or troll floating around this blog page, I welcome you. If you are a dedicated reader who has these pages bookmarked for your weekly enjoyment and education, then I truly thank and love you for your faith in this glorious literary genius that fuels your creative mojo. Fuck. I went way off track. Good thing the word "hodgepodge" is in the title.

What was meant to be said is that if you frequent here or not so much you may have discovered in recent writings, my affinity addiction to soup, of every variety. Like a drug addict, most have a preferred poison. For instance, most heroin junkies aren't likely to search out an Adderall dealer as they just got a hankering uppers. Shit just don't fly that way. Like the dope junkie, my soup addiction resembles that model more than I'd like to admit. Actually, I do like to admit. LOL.

My current soup of choice, for about 2 years now :: PHO.

Ok, so it's not entirely like the doper. I guess under the umbrella of food this addiction resembles the smack wacker in ways that I just lean towards soup, every single day. I'd rather eat soup than anything else under the sun. But that all can be discovered in that personal disclosing article [here].

Wow. Don't mean to confuse you all. Yikes. Look, there are no outlines prior to most of these essays. It just pours from the heart, unedited.

PHO. With my love for soup, specifically that Vietnamese almighty of broths, you'd think today's post would be about that dish, or rather, bowl. Fact of the matter is, I hold Pho on such an elite pedestal that I haven't yet ventured down that creative culinary corridor. I leave it for those born in the homeland to deliver that ecstasy to my mouth.

Is this to say I don't have the same respect for the Ramen experts? Fuck no! In fact, the 40 hour prep time for true Ramen broth overshadows that of its Vietnamese cousin, twice removed.

It's apples and oranges really. I just happen to favor the uniquity of the Vietnamese bowl just a hair over that of the Japanese star. And note, by saying by "just a hair" that puts Ramen in some special place in my heart. So much so that I spent damn near 40 hours making the soup in the photograph herein today.

Damn. For a photography tutorial blog, I've sure been talking a lot of food. Probably why my stats were in the toilet last month. Oh well. I write from the heart. Haters can hate. Ain't no thang. So with that heavy background, where shall we proceed to next; food or photo?

I'm thinking photo. It wasn't complex so I can leave lots of room for recipe bullets at the end.

While plating bowling the Ramen for my wife, child and myself (yep, Harper loved it), damn, how do I say this without too much ego? Can't really so screw it. People, after hours and hours of preparation and the beauty in the bowl that reflected upon said work had me in tears, literally. Got a speckle of chili paste in my eye. ;)

Seriously though, I was uber duberly overwhelmed by this work of art that I had created. Another side note? Look, us creatives aren't always drilled down into one discipline. Think about it. I shoot stills, and now film. I write. Why wouldn't cooking get my creative juices pumping as well? It all just helps scratch that itch on our right hemisphere. Brain reference if you didn't catch it.

Did I digress, again?

Narcissistically in awe of this display of gastronomic genius, I had to run and grab Suzy Greenberg (my new flagship Nikon, the Nikon D5). She's a beauty BTW. An evolution from the 4 series. Yo. 3 million plus ISO. 4K UHD. A full dedicated menu to customized video. The list of upgrades is kooky. People, I know you'll say files over 3 million ISO are garbage and I agree BUT as the tech pushes those limits, the ISO levels that were previously maxed out and shit are now totally usable. At 102K, I get totally usable files. With my D4 I could push no more than about 25K and that model maxed at around 204K. Some peepers and creepers are blogging that at 100 ISO there's a bit of noise in the shadows; stating that from ISO 50 to 400 the dynamic range of the Nikon D5 is not quite as mind boggling as the D4 and D4s. I call BULLSHIT. My friends, those are the same people who never held either camera except in their wet dreams. Having been an owner of both flagship models, I can tell you if those stats are true, and the very well may be, You gotta be some sort of cyborg to be able to tell this minute deviation. People are fucking nuts. Brothers and sisters, besides the fact this is the camera journalists literally bring into warzones since it's a beast of a build, the files that come out of her are simply gorgeous. I mean, I'm pushing ISO levels these days that were unheard of just a few years ago. And you know what that means to YOU the photographer and/or filmmaker? You don't need to sign your life away to Satan to own a couple ARRI fresnel lights. Dropping $7000.00 USD on each body seems to be saving money in the grand scheme of things. Shit, while some dude is spending a cool 2Gs on an underwater housing just to catch surfers and avoid a bit of water on his 5d mark IV, I'll walk right out into those breakers with my Suzy Greenberg as naked as the day she was born. No sweat. Of course to dip under the sea, she'd need some protection.

Now, as for a bowl of Japanese Miso Ramen, I think the Nikon D5 can handle the sitchy.

Along with Suzy's sexy bod, she was wearing the 24-70 2.8 to do the viewing and the Yongnuo 568 EX on her hotshoe to make up for the not-so-flattering ambient room lights; high hats and pendants, both (all 10 total) incandescent.

A keen reader will immediately call out and question WHY would I use a strobe if I just ranted half a page about the low light capabilities of the D5. Can Suzy see in the dark? You betcha. But that doesn't mean that I don't like to create my own lighting. It's all part of growing your style. Without light, there would be no photos. Think about it. The point earlier was that you just don't need those lights on steroids anymore. The horsepower, the wattages, although have their places aren't a requirement to make a beautiful film or photo anymore.

So the Yongnuo was on the shoe. Totes laziness mixed efficiency. It was a run and gun shoot. Not only did I want to shoot it before Stefanie took her first slurp, I wanted to create the image while the innards were still nice and hot. When you're shooting food that is supposed to be served hot, unless you have hired a $500.00-$1000.00 per day minimum food stylist, who has a truckload of chemicals and trickery to outsmart mother nature, then you'd better work fast when the broth will immediately begin to coagulate. And bean sprouts? If those fuckers aren't super cold and super fresh, well, lets just say that oxygen is not their friend. They may taste fine hours at room temp but they will start to look like a 90 year old hooker's private parts down below, who had lost 300 lbs. via gastric bypass decades ago, and is homeless with no shower, and now weights 75 lbs., due to pure atrophy from meth snorting.

The strobe. That wonderful Yongnuo. Built like any Nikon or Canon premier strobe with all the same bells and whistles but a fraction of the price. Love Yongnuo.

There's something to be said when popping a big of strobe on subjects, as subjective as it may be. I like to hit it either way, ambient or strobe. When it comes to food, I like the sharp pop that the strobe helps to build.

As for the laziness, you may have not even noticed until now that I'm pointing out. See that hard shadow on the left side of the bowl? While the strobe was bounced over the top of the bowl, off of a wall about ten feet away, a few of those protons got cock blocked on their way back to the composition. Wasn't a deal breaker so I opted not to clone and blend it out in post.

The Japanese Miso Ramen Soup itself took wonderfully to the lighting decisions. Silky smooth and check out that pop of specular light near the chopsticks. It's that light glistening on the broth. Pimp, right? 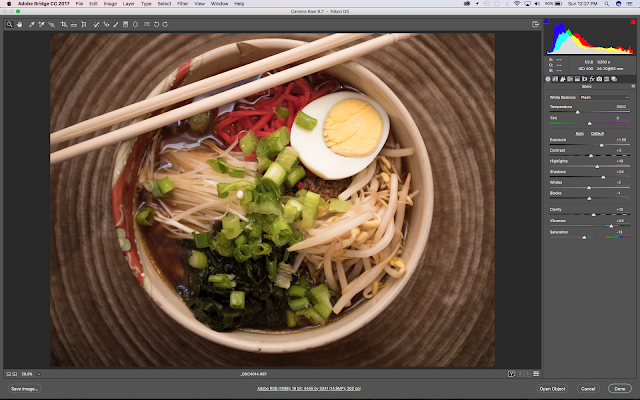 Ugh, now lemme dig into that left hemisphere to pull out the recipe. Yikes.

Dashi. Real homemade Dashi. None of that throw-a-powder-pack-in-water-and-call-it-Dashi Bullshit. From scratch people. And it was pretty easy. Easier than chicken stock. Oh. Dashi is like the Japanese mother of stocks. Japanese use it for just about every soup they make.

To make? Let 4-8 oz. Kombu soak in 5-6 quarts water for about 12 hours. Then bring water to simmer and remove the Kombu. While simmering, steep a few ounces (I'm so exact, I know) of Bonito flakes. Strain and store in fridge. Bam. Dashi!

Make about 6 hard boiled eggs and put in fridge.

Folks, I'm pretty sure I didn't miss a beat here, both photographically and culinarily. I'm sure a troll or stalker or peeper or creeper will find something wrong I did and if so, hey, don't sue me. LOL. A lot of intel cranked out here today and the brain is officially fried.