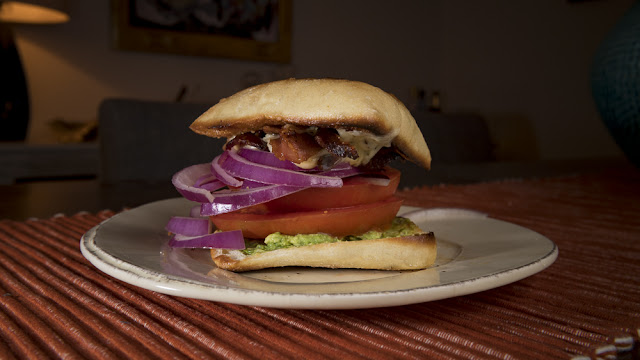 Ok, so the sandwich ain't the prettiest in the world. A chef, I am not. But a visual and literary storyteller? That I am.

First The Inception Of Today's Sandwich - The BAT

Not the history of the variation of the BLT. Rather the birth of this exact sandwich that has been shoveled into my belly.

It all began one glorious Sunday morning mid October. The skies were clear and air brisk...

...No, no no. Just kidding. No narrative today. I'm working on short and sweet. Key words being, working on.

It was, in fact, Sunday morning as the family and me headed to Linvilla Orchards in Media PA to do some pumpkin picking with cousins, Matt and Dana.

The chaotic crowd was craziness. No joke, a ten year old kid cut in front of me as I was about to walk into the bathroom. Little fucker.

After picking our gargantuan gorges for carving, we headed to the apple orchard to, um, pick apples of course.

Nearly 4:00 pm, we started to make our way back when we discovered their aisles of tomato plants. As it was late in the season, pickings were scarce but both of our parties managed to score some real choice red beauties.

On the ride back, Stefanie mentioned making BATs for dinner as we just pulled these gorgeous tomatoes straight from the vine. Admittedly, at first I was a bit skeptical but my wife's careful selection of descriptives had my mouth watering for this brilliantly delicious variety of the American staple; The BLT.

We made it home by 6:00. No worries since I sometimes don't eat dinner till 10:00. Yes, the family eats at "normal" dinner hours but sometimes I like to make sure the family is all taken care of and tucked away in bed and Bruno has taken his late walk, before I sit down to relax.

As was the case on this evening. Stefanie prepped and put my ingredients aside so that I could prepare my Bacon Avocado and Tomato later on. Red onion too but that wouldn't work in the modified acronym. Bread is an obvious ingredient.

And if you look closely, you will see, creeping among the bacon. . . cheese. You're thinking that avocado and cheese sounds awful to mix together on this type of sandwich. I thought so too but I was super hungry and felt the added curds would do my body good.

A quick google search turned up some good cheeses that pair nicely with avocado. Luckily, we had a nice clothbound sharp cheddar that I was able to chop into and dump on one side of the bread to warm and melt. Of course the Avocado, Onion and Tomato were left chilled. Bacon took a burn bath with cheese and bread as well.

While my stomach spoke to me in tongues, its desire to devour this delicacy, I was actually prepping some gear for an upcoming shoot.

Checking and double checking battery counts and pocketwizard inventory inspired me to put together a setup to shoot and share with you today.

And deservedly so as I haven't shot much food for you guys lately. And, as you can see, my take on food is often very different than that of the masses.

First, here is the diagram and then we will discuss how the photograph came to fruition. 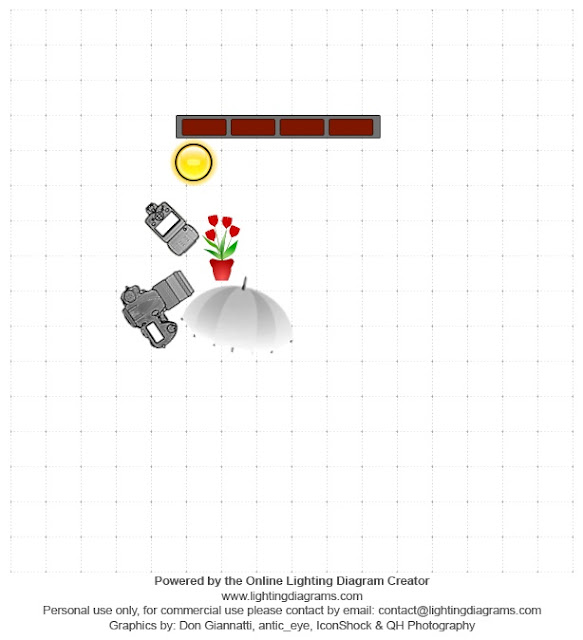 Looks like a jumbled mess doesn't it? I'm tellin ya, it looked worse in real life.

I'll assume some of you need to know and will not judge your intelligence based on this :: The flower represents the sandwich. The Online Lighting Diagram Creator doesn't have a sandwich in their menu bank.

Starting at the back wall. That's what's called in the filmmaking industry; practical lighting. Basically, the light carries 2 jobs :: a prop and a working light. The more time I spend behind the lens, the more I look for practical lights, even if it's the sun.

That lamp is housing a standard tungsten bulb. Blood orange, right? For a nice sterile shot, many would gel the strobe with 1 or 2 1/2 CTOs and crank the Kelvin down to somewhere between 2500 and 2900 degrees. I un-balanced this one at 5500K or daylight WB, keeping the practical warm as can be and hitting the sammy with sterility to pop it off of the page.

Before I get into the hows, whats and whys, lemme give you the exposure to help explain ::

Let's get the easy out of the way. That super long shutter. A quarter second. Sounds fast in the civilian world but in the image making world, that is sloooooowwww. Well, at f/11.0 and 100 the slow and low was needed to burn in that practical (ambient) lighting. Of course with these speeds or slows, I perched the Nikon D5 atop the FEISOL carbon fiber tripod system. Love that FEISOL.

You'll notice the ambient environment ain't too bright as I wanted to really play into the comp that it was indeed late in the evening. And Bingo was his name oh.

That light was modified with a busted and bent up Calumet 45 inch convertible brolly. I went for shoot thru. Yeah, it was totally back to basics on this day.

Still not super happy with the light, although very nice, I wanted more pop. I grabbed a 430EXii from the pack. The strobe that would have at least gotten me f/4.0 or even 2.8 at ISO 50 but it was late and I didn't want that sandwich to sit uneaten longer than was necessary.

So I used the Canon speedlite as a kicker, just to pop some specular on the innards of the BAT.

Dark and dismal with a big ole dash of dazzling deliciousness.  If you can't tell by now, I love my alliterations. I don't have many poetic tools in my bag but from what I do have, the alliteration is my fav for sure.

I created that word BTW, summarization.

Umm. Oh yeah. Post production? Not much. I think I crushed the blacks just a little and upped the contrast. And to think all of those Pixel Peepers and Creepers who have never held a pro body, regurgitating stats. I can't wait to do a real life side by side for you all to . . . . ooooh. I just had an idea.