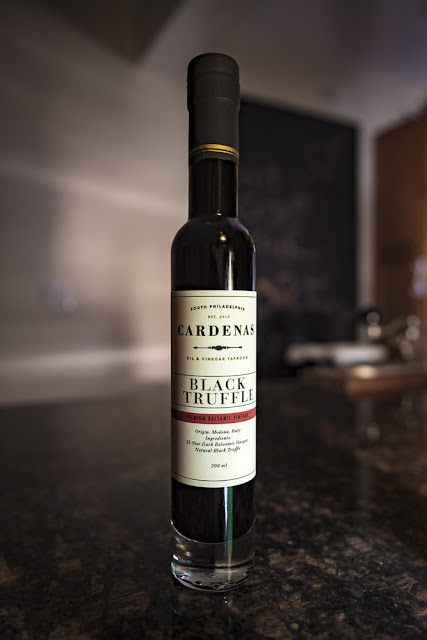 Amazingly, just a post or two ago i just pointed out that there hadn't been enough food photography posts pouring out of these digits as of late.

Suppose you could say it has been officially made up for.

Today we will examine not only the whys and hows of this photograph . . .

Yeah. I said that.

Oil & Vinegar Taproom. Fuck me sideways and silly from Seattle to San Antonio.

So without further ado.

Sure the photograph may have taken 30 seconds but the post may be a hair longer of a read. I promise to keep it as short as I know how to.

Let me say . . . HOLY TITTY CITY people. This place is off the chizzle my frizzles.

Last year my wife came home with a bottle of Peruvian EVOO (extra virgin olive oil). At closer inspection of the bottle, I was intrigued and inquired about the label.

Stefanie, my wife, explained that this new spot was located right in the heart of the Italian Market. Specifically, Cardenas is located at 942 S. 9th St. It's ideally located just a few doors down from the cheese mecca of Philadelphia, DiBruno's House of Cheese. And let's not forget Claudio's, another fine establishment of the wonderfulness that is moldy, stinky and magnificent cheese.

The Peruvian EVOO, drizzled on a nice crusty loaf, was, is and always will be FANFUCKINGTASTIC!

Fast forward from that game changing bite of oil washed bread and I find myself stuck by their storefront. We, meaning my family and myself, oft hit the Italian Market for veggies, fresh meats, cheese and homemade pastas. On that particular morning, my daughter Harper and I were on a mission to find the elusive Enoki Mushroom.

After coming up empty handed Harper and I were wandering around looking for a cafe to grab a quick lunch. Well, my daughter, serendipitously, decided to stop dead in her tracks in front of the Cardenas entrance. Why'd she stop? I have no idea but that's what 18 month old humans like to do. If I had to guess it was to jump on the trap door to their basement as the racket it makes was quite pleasing to her ear.

Will power was left at the curb and I snatched up my child and headed in to check it out. Within seconds I was chatting it up with the GM/mother of the shop owners.

Excuse my forgetting or not getting her name but this GM knew her oil and vinegar. After about 15 minutes, I had sipped countless pairings of sweets and savories. Bottom line?

Harper and I ended up buying a bottle of the Black Truffle oil. I'm no expert on describing foods in a deconstructed fashion so let's just iterate that this concoction is #YUMMERIFIC. The stuff is nearly as viscous as an artisan maple syrup people! Have you ever had vinegar of that consistency? I think not.

When I'm done here I'm gonna pour some of the Peruvian goods and the Black Truffle magic into a ramekin and dip in with a nice crusty baguette from La Colombe and call it dinner. Why not?

People, the evening of purchase I decided to grab a quick shot for The Gram with my iPhone.

Ultimately, I felt that I had not payed proper homage to this fine product. 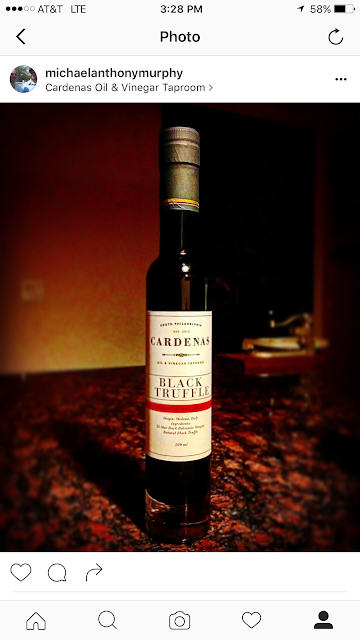 Call that screen grab a cheap and sneaky but yet clever way to let you guys find my Instagram page. It's simply michaelanthonymurphy if you didn't catch it.

Let's talk about this one. It ain't all that bad considering. The label is nice and evenly lit. I threw the sides into some blur in post. Um, the splash of light on the back wall is ok but with the editing I did on The Gram, seems to have pulled that into some unwanted noise levels. I'm not a huge fan of how you cannot infer that the lower part of the bottle is a clear, nice thick chunk of glass that the contents don't dip down into. The specular on the shoulders of the bottle is nice but with product like this I prefer a longer highlight. All in all, a decent iPhone grab and toatz magoatz  Instagram worthy.  But there was just something compelling me to do this bottle of heaven a bit more justice.

Are all my food and product productions equally as quickly shot? Hell no. Many are complex lighting scenarios. Big mods. Think a small film set.

Now, is the opener, the photo of topic a game changer? An Ah Ha, Pulitzer prize winning product photo? NatGeo worthy? No.

What makes the opener "better"?

I prefer the opener as I feel the light and composition are overall more refined.

The background textured light builds some separation from the bottle.


I could get deeper but as we're already way over on the short post, I had to just point out a few things that jumped out at me.

What's With The Darkness?

IDK. Sometimes I just get into a kick of shooting things with light but at the same time evoking a darker vibe.

I was in a "dark" period for some time and hovered over to bright and even illegal in the highs. These days I'm all over the board; not conforming to any single camp, comfortable in my own skin.

As mentioned earlier, that "better" shot, the opener probably won't win a Pulitzer nor was there even any prior premeditation. It was plain ole run and gun style. I wasn't uber duberly thrilled about posting the Gram shot and realized Suzy Greenberg (Nikon D5) was sitting about 3 feet away on the same granite countertop that the bottle of Cardenas Black Truffle Balsamic Vinegar was positioned.

I decided to shoot again.

The following is TOP SECRET.

As you may or may not know, when it comes to lighting, I'm a member of the Strobist camp. Off camera flash is the ONLY way to go. Never do I shoot auto, anything, in terms of exposure (shutter, aperture, ISO, white balance or light ratios).

I'm a big advocate that if you do anything auto then you are letting the camera and or light make your creative decisions. In manual you are responsible for EVERTHING. As it should be.

On this particular evening, the Nikon D5 was strapped with the Yongnuo YN 568 EX on the hotshoe. I was running some TTL tests. TTL is nerd talk for Through The Lens. Basically, whether you are shooting manual or auto exposure, the strobe decides its power ratio to expose the scene properly based on what's coming through the lens and said exposure. I'm not a fan but was dicking around.

Although I don't shoot TTL, ever, it is always good to keep all of your tools in your pack, honed razor sharp because you just never know when your gonna need it. I.E. war photography, wedding photography, etc. Extreme examples? Not really. They are certainly two situations where TTL may come in handy.

That's my story and I'm sticking to it ;)

A few setup shots with the Nikon D5 and the 24-70 doing the eyeballing, bouncing light in traditional manners was not yielding awesome results. You know what I mean. Off the ceiling. Wall camera right. Over the shoulder camera left. The same ole same ole had the image looking as clean and sterile as a proctologist's middle finger. Or index finger. Or both. Or middle and ring for a quasi 6-packer. #NSFW #NSFC #LMAO #JustSaying 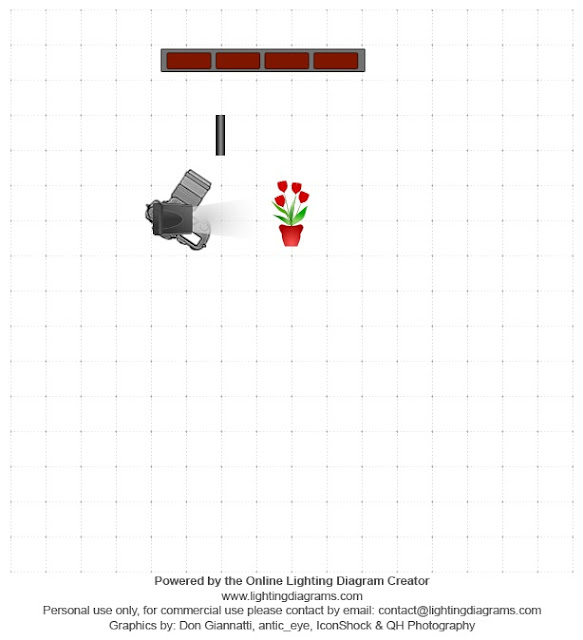 Pretty simple as you can see. Shit, it probably would have been easier to explain in words that to go over and create the diagram. LOL. I'm not knocking the Online Diagram Creator BTW. Actually, when trying to explain complex lighting scenarios, the OLDC is amazing.

While the gold color of the bowl caused a White Balancing nightmare, the texture of the sculptured clay lended to throw that splash of textured light on the background wall; cuculoris style. Coupled with the shallow depth of field, the bottle really separates itself from the environment, drawing the viewer's eye straight to the product in a aesthetically pleasing fashion.

Literally, it was one, two or three boring shots until I hit the bowl with the strobe and it was a wrap. The longest part of it may have actually been taking the lens cap off.

Not a whole hell of a lot. Oh. Yeah. That WB. That contaminated coloring. No biggie. I used the eyedropper to sample the white label of the bottle and then dialed in accordingly with dash of creative taste and realism.

Now I gotta head for that crusty loaf. Adios.