super selfies on steroids :: the how and why of self portrait sessions 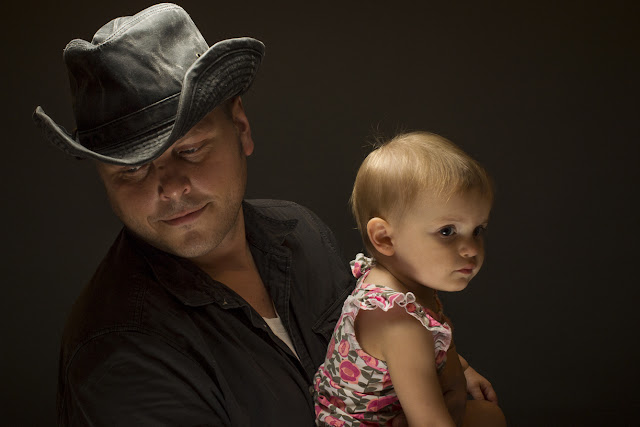 On the recent 6 year anniversary post, [here], after sharing a few, I suppose a good term would be, selfies on steroids, I thought that a nice iteration of selfie posts past would be uber appropriate.

Join with me today as I school you on the subject. Recess is over!

Eh. I just made that up on the fly. So, if you hear anyone drop that phrase you can tell 'em confidently who coined it. Ok, maybe I didn't but it's certainly possible. I haven't Googled it and as like that tree in the woods. You know? The one that falls?

The reason I whipped up the Selfie on Steroid recipe was/is that I didn't want to be the guy spitting out words like "professional selfies." So douchey. Professional simply means you get paid for your creativity, not a label on level of skill. Refined selfies crept into my skull but seconds later the hilarious comedic side of my persona kicked in. Bam. Selfies on steroids was spewed from my keyboard onto your monitor.

Wow, spent way to much time on that.

From selfie sticks to bathroom mirrors, we ALL take lots of photographs of ourselves to share on the social networks. I actually took one of myself while peeing in a bathroom (thank goodness) at a noodle bar in Media, Pennsylvania. It's on The Gram if you wanna see. my user is michaelanthonymurphy.

That's all super terrific but we all know that the majority, like 99.9999999% of them ain't gonna be found graced upon the corridors of MOMA. I bite my tongue because centuries from now that may be the big exhibit; all our dumb asses as we live in the now.

I'm all over the map today people. Pull me back in.

Ok. I prefaced with words like synergy and exponential.

Let's say you, seeking commissioned work or just want to be the most pimp starving artist on the block, want to be the best you can be. And you want some recognition; financial or admiration. 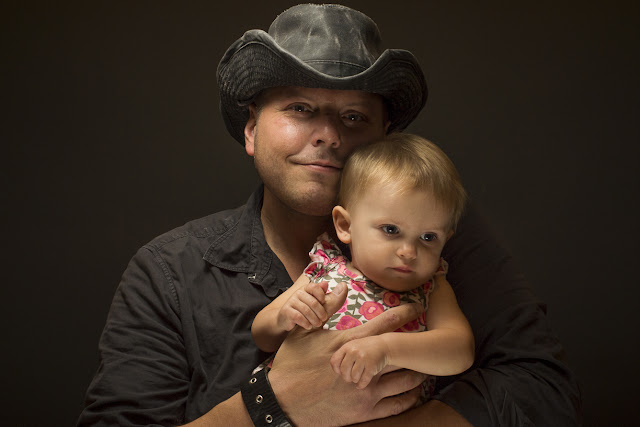 I touched on this in the recent 6th anniversary post. People, in today's ADHD, medicated, visual and social environment, as so many of us are our own startups, we gotta build our brand. You can bitch about it all you want but if you don't hop on the progress train, it's gonna leave you in the dust or worse, run you over.

Like BMW or Mercedes Benz, today we gotta build personal brands as equally as identifiable as those titans of the automotive industry.

Most of you are here because you are a fellow creative; filmmaker, still photographer or otherwise. If I drop names like Joe McNally, David Hobby or Chase Jarvis, every one of you has an immediate mental image of each of their faces. Not their logo. Not even their most recent works. It's their faces you see first and foremost in your grey matter.

Shit, you don't even have to be a photographer and you probably know who Chase Jarvis is. The man was a pioneer of using the internet to grow his personal brand.

Any of you know Gary Vaynerchuck, AKA, Gary Vee?

Faces people. The faces are their logos.

Do I need to elaborate? Can we chalk this section off as a YES, you understand the VALUE of a professional refined selfie on steroids?

"Tomorrow's victory is today's practice."
-Chris Bradford, The Way of the Warrior 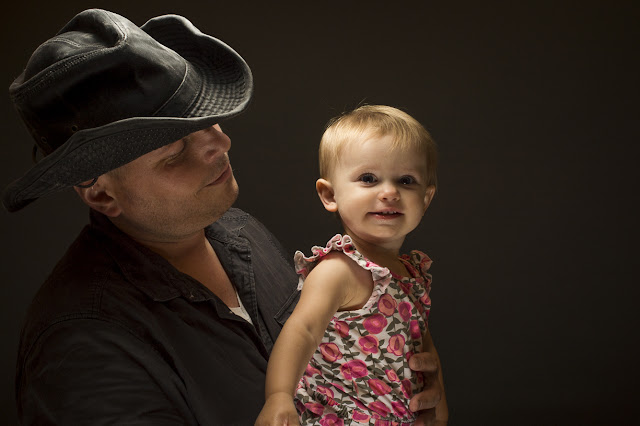 Friends, you know I'm no fan of living like a sheep amongst a herd of other dumb ass twitchy sheep, but you and I know what they say about practice.

There are some lessons in life that even our brilliant black sheep mind's can't or shouldn't ignore.


You are a working full time photographer, it's easy to find your camera spending more and more time in it's bag, being used more and more, solely for client work.

On the flip, you're an enthusiast, a hobbyist or whatever you want to be called. I just call you an artist. We are all just artists trying to tame the monkey on our backs. You, my friend, are stuck at home, in a creative rut, binge watching House of Cards. It's not that you're being lazy or don't want to shoot but you don't know WHAT to shoot.

Both are no nos.

What more challenging subject than yourself? What better way to work on things like direction and lighting?

Am I right or am I right here people?

I mean, come on! How many of you have gotten comfortable with like one or two lighting scenarios that have you living on easy street?

When's the last time you broke some rules?

When's the last time you took some risks?

When's the last time you really really pushed the limits of your capabilities? 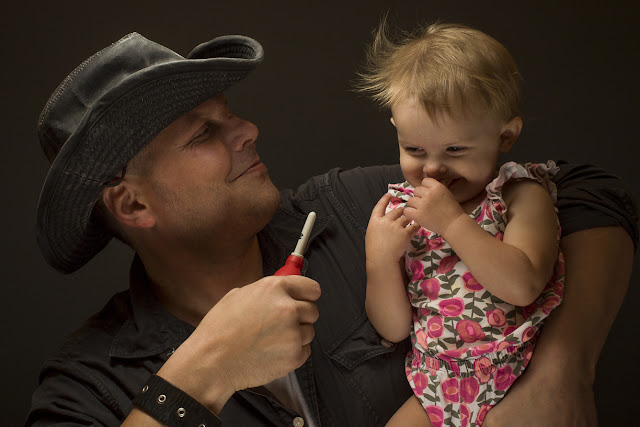 Although my knowledge of social media metrics has not yet been perfected, I got a pretty decent grasp on page views, likes and how the reflect upon the performance of my blog and website, more specifically how it all converts into dollar dollar bills y'all.

Look, across the various media that used, I noticed the opening photograph of Harper (AKA my daughter, AKA H™) and myself were getting lots of eyeballs. Eyeballs are good. That's a metric I know how to follow.

First let's take a look at the studio setup and I'll break it down from there, or here I suppose :: 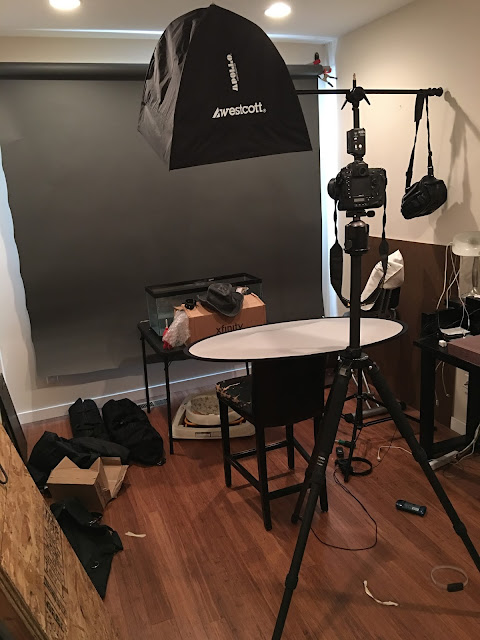 Before you talk shit. Take a look at this :: 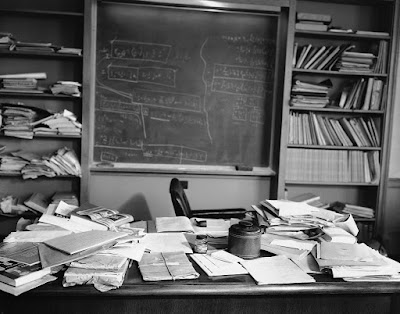 It was a two light setup. From above is the key modified by a 28 inch Westcott Apollo firing at 1/8.

Coming up from below is a 40 inch Westcott reflector. I initially was going to simply bounce the key and use the reflector as a fill but I wasn't digging the results. Keep in my I had a big hat blocking  some light. I decided to throw a strobe beneath the reflector and fire through the translucent material, also at 1/8.

The background caught at little bit of ambient light as I dragged the shutter a bit to suck a few of those protons onto the Nikon D4 sensor.

Aperture :: f/16.0 Yup, needed every inch of depth as humanly possible. You see, focusing shots like this is a big pain in the balls. A shallow DOF would have made this a bigger kick in the nuts.

ISO :: 800 Didn't want super clean. In the studio I could play any number I desire.

Strobes are triggered via Pocketwizard Plus ii transceivers. For wireless triggering of speedlites or studio heads, Pocketwizard is the only way to go. Period. And I'm NOT on their payroll.

The workhorse is the Nikon D4 outfitted with the Nikkor 50mm f/1.4G.

The rig is perched atop a FEISOL carbon fiber tripod system. Sweetness. Awesomeness. And any other NESS you can think of.

The fish tank? A new way of reflecting light for rad effect. STOPPPPP!!! I'M KIDDING!!! That's sitting there for some commercial product and personal works.

Rad lighting that brings out cool texture on the hat. Moreover, we both get a super cool (actually warm) glowy mcglowerson glow on our faces attributed to the bottom fill that would have otherwise looked quite Kmart style otherwise. 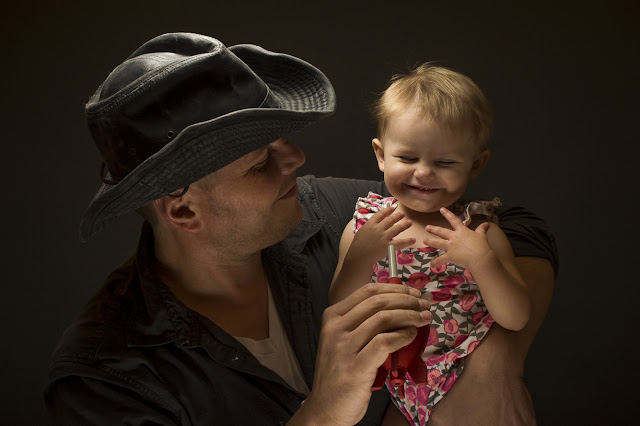 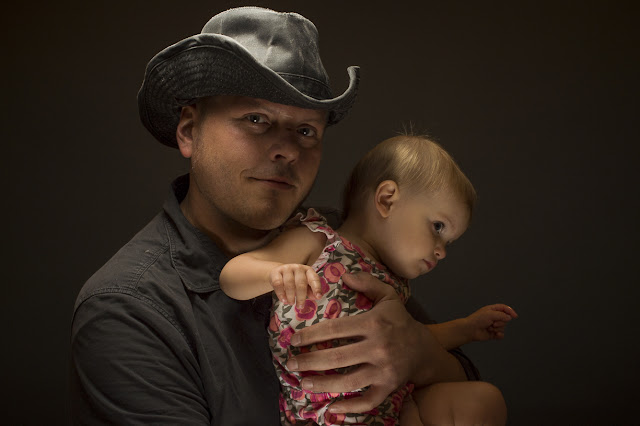 Introduced earlier, Harper, or Htm, my daughter, was playing independently in the studio while I planned, setup and attempted to execute the super selfies on steroids.

Key word ATTEMPTED. So. Why not snatch her up, cuddle and love her into the session. Much end result as her beauty balances my ugly mug.

As Rain Main taught us, more than counting cards, is that KMART SUCKS!

Got nothing to shoot? I beg to differ. Get your ass in front of the glass and get crazy!