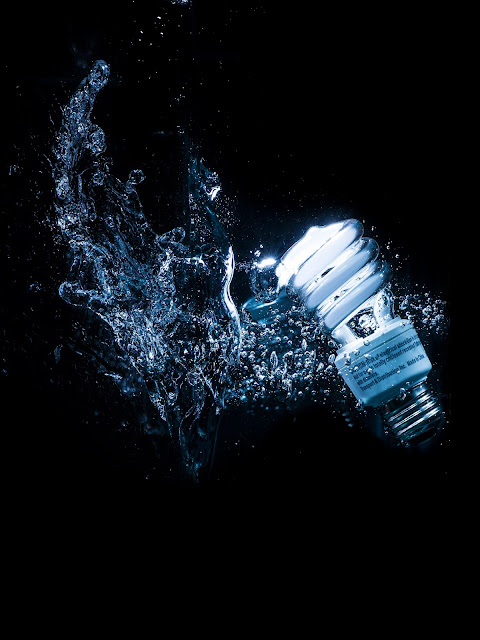 As promised, by the end of today's post you will also possess the sorcery to create similar photo trickery.

Leading up to the day of this shoot, I was spinning my wheels trying to figure out how on earth I would use one or more 9 volt batteries and a couple plain ole insulated wires   to light the CFL bulb.

You see, knowing that I was planning on dropping a lit bulb into a fish tank filled with water, I had the foresight (a rare occurrence) to plan a way to do this WITHOUT plugging into the wall outlets of the studio.

Admittedly, I'm no fan of the fiddling of electricity's natural intentions.

Yes, rooms full of high powered photo gear gets me all weak in the knees but I save the disassembling and repair of said gear, to those with formal electrical engineering backgrounds.

What You May Think You Need

Before firing off a single shutter, I knew the physics of photo strobes and how to manipulate their capabilities to freeze motion. Contrary to what many people think, for still photography, to capture tack sharp, say, for today's discussion, splashes of water, it's not a super fast shutter speed that is required to stop motion. Nope. You can actually freeze motion quite efficiently while dragging the shutter. WTF you say?! Yes! It's all about the flash duration.

I'm not gonna get all geeked out here as I had a long night and prefer not to give myself a headache with formulas and shit. So let's keep it real; summations that actual humans will understand.

If you've never picked up a studio strobe or speedlite then you will probably be confused no matter how I explain this. Actually, maybe not. Ain't all that puzzling.

Studio heads and hotshoe flashes, most anyway, have power control capabilities. They are discussed in Stops and read out as ratios.

Just writing 1/128 is making me very angry as I will post another time.

Why do you want these tiny fractions of power?

You see, the higher the power, the longer the strobe duration. At very low powers, the flash happens much faster and with the faster flash, the motion will be much more frozen. You may notice power differences when fired but the human eye and brain cannot detect one firing faster than another as the flash times alone will boggle your mind.

Crazy fast numbers right? You're brain can't catch it but your camera's sensor will. At careful inspection, comparing a similar shot at 1/1 would produce a ever so slight amount of motion blur, getting progressively better as you power down, stop by stop.

Goddamn. I just wanted to write a list of perceived necessary gear.

I still hadn't had a concrete plan on how to light the bulb. But, being the impatient fucker that I am, I had to get into the studio and brainstorm on location. Improvisation is one of many great traits that a photographer must possess.

So I grabbed a CFL, literally out of the office lamp, on the desk, in my studio.

The tank was already about 50% full as I'm doing some commercial work with spectacular splashes of water.

If nothing else, it would be a good test run to see how the final shot would feel.

[Note :: Be aware that every bulb you drop into water will fill with water and need to be destroyed after each attempt.]

Yeah, that note to you guys was a real kick in the dick when I realized myself that these bulbs aren't water resistant. I mean, I had hoped to get sparks and shit but so didn't realize getting it right on the first drop would be a miracle and going trough a dozen bulbs would not be good for my frugal budget.

Photoshop. Aye. The thought of intense photo manipulation makes my skin crawl. Can I do it? Sure. Do I like to do it? Only to some degree.

I used to spend hours if not days on single photos, back in the day. As a newbie, to me, it was all about the post production. Today? Sure, post gives my work the MICHAEL ANTHONY MURPHY look but I'm a big believer in get it right IN CAMERA. If I spend over ten minutes on a photo edit these days, that's too long. Give or take of course.

So the plan was to get the shot of the bulb, lit, in the lamp, positioned similarly to how it would be dropped in the tank. Then, get the shot of bulb splashing down. Finally, marry the two together in the digital darkroom.

Story of my life, right? LOL. BTW, it will be my book name. Cannot steal that shit. Read the bottom of this page. It's all copyright protected, bitches.

Turned out that the contrast brought about with the dark background and how the strobe, camera right, side lit the bulb, that without any power, the CFL appeared to have some juice running through it's twisted glass.

So, I wasn't gonna share the untouched RAW file but you just gotta see how it came outta camera before I break down the specifications. 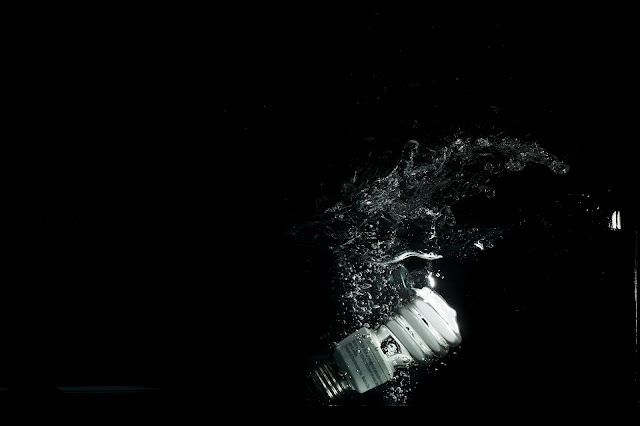 Crazy town right? There she is. RAW. Ground zero.

The strobe is basically touching the tanks' glass just out of frame, camera right.

"But it looks so much different",  you say. 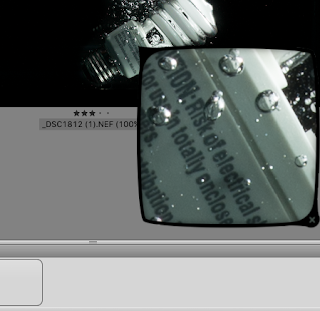 Talk about freezing motion!!! This loupe is either 200% or 300% magnification. Focus not only on those bubbles but the text on the CFL itself.

Post production :: So to get the final product, I knew I had to do come cranking and tweaking in the Adobe ACR editor but nowhere near as much that was anticipated when thinking I had to marry two bulbs to create a compelling and believable single photograph.

My ACR workflow is always top down. White Balance then Exposure.

Yeah, I tightened the crop and notice rotated counterclockwise 90 degrees. Just a personal preference. Thought it looked cooler this way.

Frequent readers may question that I don't typically crop. Again, that IN CAMERA mojo. You are correct BUT while I played both roles, PA and Photographer, I needed some headway in case the CFL wasn't dropped dead center perfect. And notice the RAW file. That fucker fell nowhere near center.

Now go make some photo magic and don't get killed in the process.

Speaking of safety! As the strobe was just outside of the tank, I kept a Ziplock bag over it for super protection.