how to better your food photography game in 5 easy steps 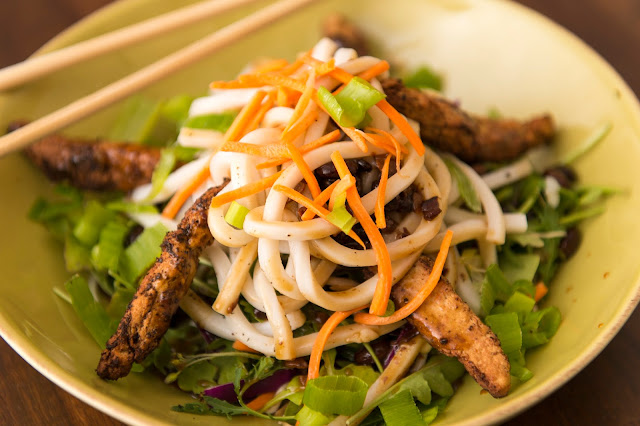 Of the many photography niches one may pursue, today, the best food photogs get as much street cred as staffer for Vogue.

So you wanna step up your game and creatively capture culinary creations as a career, yeah?

1. Learn to Cook :: Damn. You sure as shit hoped I was gonna jump into this with some rad lighting ratios or at least some cool gear. Sure that's all good and fun but I gotta keep it real. My friends, not only am I sharing some shit you didn't want to hear but I too don't like to hear this one either.  Look, I admire, praise and even apotheosize their mad talents. Fact of the matter is, I'm lucky if I don't fuck up a hard boiled egg. Having said that, having yourself to rely on for your next portfolio project is quite liberating. Which leads me to . . .

2. Presentation is Everything :: Back when I was single and had more dubs than I knew what to do with, I used a delivery service, every Sunday, when the new Sopranos episodes aired, to bring me dinner from one of the most pimp restaurants in Philly. Guess what? When that filet and wasabi mashed arrived in a foil box, it sure as shit didn't taste as good as if experienced at the meal's origin.

Further, I even once ordered breakfast from a local hotspot, tried to plate it and use only for shooting purposes. People. The bread was soggy. The potatoes wrinkly. It all just looked kind of sad really. Funny thing is, I have a blog post featuring this meal and no fucking way am I going to link to it. If you want to dig. Be my guest.

Combine some minimal culinary skills, that includes plating, and you can make a plate of beef jerky and mac and cheese look pretty sexy. Now, add your years of exposure and light? Yes! You're catching my drift now!

3. Props :: I'm a big fan of props. Be them in human based or food based or anything based photography, props add interest. They add to the story you're trying to tell. Be the props extravagant or barely visible, like the chopsticks in today's photograph, props will up your game.

I'll get to today's photograph in a minute but speaking of the chopsticks. You barely see them and yet your brain immediately extrapolates what they are and with that context you deduce that the meal is inspired by Asian cuisine.

4. Composition :: People! Composition and angles. Know when to shoot straight down (soups), straight in (sandwiches) or from a 45-ish, like today's meal. Of course you are more than welcome to break the rules once you've mastered them. Breaking them before mastering usually is a recipe for disaster. No pun intended.

5. Light :: Whoa, what about camera types and tripods and all that shit?! That's where you thought I was going now, yeah? Nope. Skipping right over that. Granted you have the previous four variables drilled down like a hooker to a motel mattress, light is where you will take your work from the vast sea of Instagram normality to the revered of restauranteurs in your region and beyond.

Here's the thing. 90% (guesstimate) of the food photos on The Gram were shot in poorly lit, as is, ambient environments. Many restaurants are dimly lit and it's in these eateries that Grammers are shooting their meals. Why? Obviously because the chef at local gastro pub cooks and plates a dickload better than you, right? Refer to 1. and 2.

So, while many are shooting in crappy light, they've learned at least that the flash on the phone is horrific or more, that their date would be mortified if across the table a swath of light nukes the entire vibe of the room. Having said that, EVERY mobile device has shitty low light performance. Even consumer grade SLRs struggle in this department. The result? Noisy, muddy shots, no matter how brilliant the meal, plate or composition are. However, wether using a iPhone or the obscenely expensive bodies I have in my bags, light will change the game. Again, this takes us to numbers 1. and 2. since the sheer megawatts of power you'll want would not be a good idea to unleash in your favorite brasserie.

Cranking a heaping amount of protons on the meal will help your mobile device by default, crank up the shutter and drop the ISO which will yield much much cleaner, crisper, more "professional" photographs.

Strobist? Better have that strobe off camera or at a minimum bouncing light. Anything but firing on axis!!!

Grids to gobos. Eggcrates to exposure. f-stops to flags. Scrims to shutters. Wizards to watt seconds. My friends, LIGHT is your paint and your camera, whatever kind, is your brush. I could rattle off mountains of information about light in this section but instead will sum it up with this simple adage::


"Without light, there would be no photography."


Fact of this matter is, I based this blog on ways to light photographically; chasing light if you will. It was actually first named LIGHT but in hindsight at this very moment, maybe CHASING LIGHT would have much more catchy. Eh, doesn't matter at this point as I've build a brand around my name, everything is accordingly appointed, leaving out any assumed ego of course.

Most great photographers were not born with a Leica around their umbilical cord. Sure, there are a few scattered freaks of nature out there but most of us have to work to be brilliant. My point? Stop envying and crying about your shortcomings. Embrace and recognize your weaknesses, go to the supermarket, cook up some ramen for all I care and just get shooting!

Gotta first share the meal on today's NERD FILE. Admittedly, this section likely hasn't ever had a food recipe listed.

The wife and I LOOOVVVVEEEE the Udon Noodle Salad from Hip City Veg. One evening, I decided to copy, best I could, and surprise the honey with a homemade version.

Most ingredients I grabbed from the super duper awesome Super 8 Asian restauranteur depot at 16th and Washington, South Philly. Talk about legit. Nobody speaks English along with labels that lack any Western print. Imagine where you'd pick your cold cuts in the back of the regular market, now replace that well lit, glass case with water and humongous catfish swimming around. Aisles are lined with fruits and vegetables that look as if they came from another universe. Need I continue?

Light? I typically start with a black canvas. Meaning, without any strobe action, the exposure would have given a pure black exposure.

As this was a run and gunner; I was really really hungry and just wanted to shoot something rad and put the deliciousness in my belly. With that being said, I simply threw the Yongnuo 568 (I think) on the hotshoe, popped on the TTL, turned the head towards the wall at about 8 feet from camera left and blammmo!

Easy light that crushes most any ambient sources in any dim dining room or, and not to be an asshole, in your kitchen for that matter. Relax. I say that with love and will to up your game. Odds are there are multiple light sources in your kitchen with environmental friendly (LOW) wattage.

Questions? Hate mail? Comment below or feel free to email me at michael@michaelanthonymurphy.com.