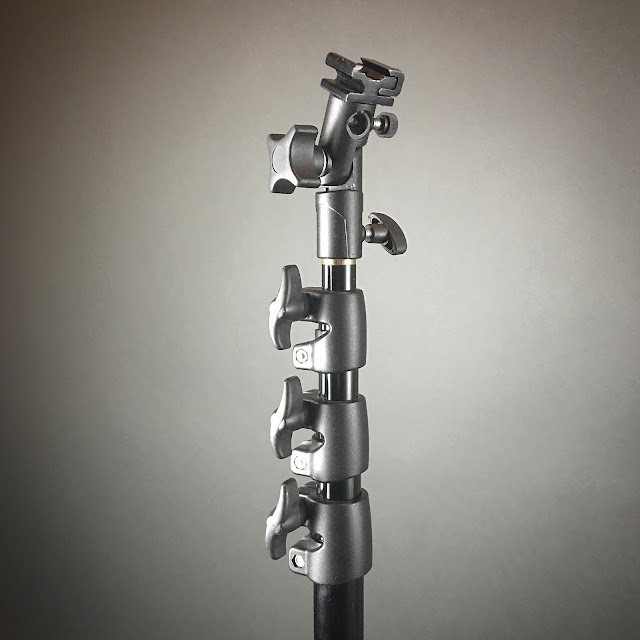 Ask and ye shall receive.

Maybe a new approach. After posting photos on the socials and watching trends, I'm experimenting by writing the blog based on those demos versus vice versa.

Via searching the Google box on the sidebar to the right of your screen, you can certainly find a blog or two where the unmentionables are mentioned; gaf tape, A-clams, you know, the unsung heroes.

Today, our hats off (hmm, I wonder if it's hats or hat's) to the newly crowned champion of the unspoken, the greatest underdog of the pack, THE LIGHTSTAND or C-STAND or whatever your preferred moniker may be. Although, I'm not quite sure if there is any other name for this precious piece of paraphernalia.

Neither sexy nor a star, the cold steel piping and rigid articulations need their day of recognition.

Let's ponder for a minute, life on the set or on location, without our sadly unappreciated stands.

First and most obvious, how on earth would we mount our lights? Besides being a fiscal faux pas, wouldn't it look a bit outlandish seeing PAs scattered about the set holding packs over their heads for hours on end. Hope your workers comp insurance premiums are paid.

Their inherent attribute is fairly obvious; supporting light fixtures. But it's the lightstand's/C-stand's many other offerings that we the filmmakers and photographers often take for granted.

Flags and reflectors, gobos and cookies, diffusers and boom arms. Our stands offer to us so much more than they were born to do yet we clamp these accessories to their limbs without a second thought.

Well today friend of whatever you prefer to be called, Light or C, Mr. Stand, we salute you.

It Ain't Over Yet People!

I freaking love it when people say to me, "if I had your camera, I could create photos like you." I often respond by handing over my D4 and asking them to show me. Narcissistic? No, just confident of my talent. Ok, so maybe a tad narcissistic.

On the flip side to that coin, I've been called out when I tell people a shot was taken with an iPhone. The reaction has been that I'm a liar or that their mobile device's camera must be defective in some way.

"The best camera is the one that's with you."


Fact of the matter is that the photograph of today's hero is shot with an iPhone 6s Plus. Not a photograph that's going to end up in any gallery anytime soon but it certainly exhibits all of the characteristics of a "professional" photo.

But what gives it that "look"?

My friends the answer is simple. The thing that our underdog was born to bear; LIGHT.

Take a look below. This is the same shot of Mr. Stand. Shot with the same iPhone, in the same room, against the same background. 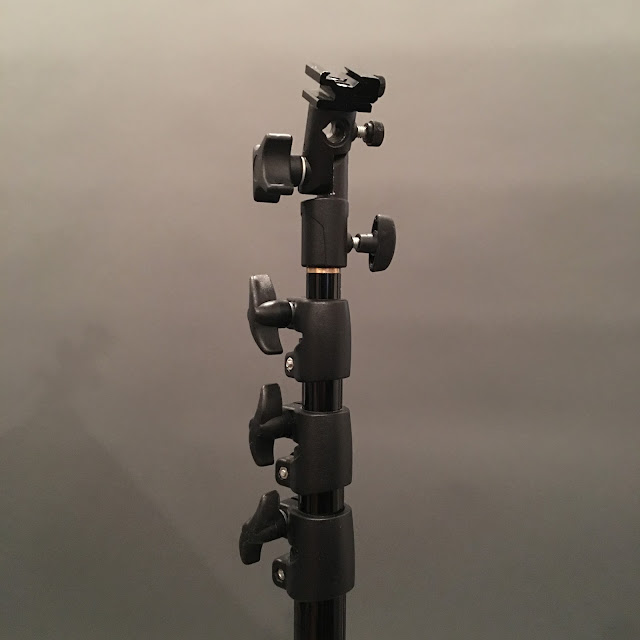 Pretty fucking bland right? This photograph screams amateur! Go ahead, you can call me out that the opener obviously had some post production done to it and yes, I'd agree but super minor stuff. I think I simply added a vignette and desaturated a bit for some added flava for The Gram. The awesomeness is born by the lighting. Always was the case and always will be.

Can the awesomeness be built in an ambient environment, you ask? Absofuckinglutely! You just gotta find the light, don't let the light find you. Oooh. I'm gonna Tweet the shit out of that one. Sure, you can too but be sure to throw me the credit.

Fortunately in the studio, the abilities to mold and shape light are more readily available.

This brings me to the final affair of the article. The BTS of the photograph. 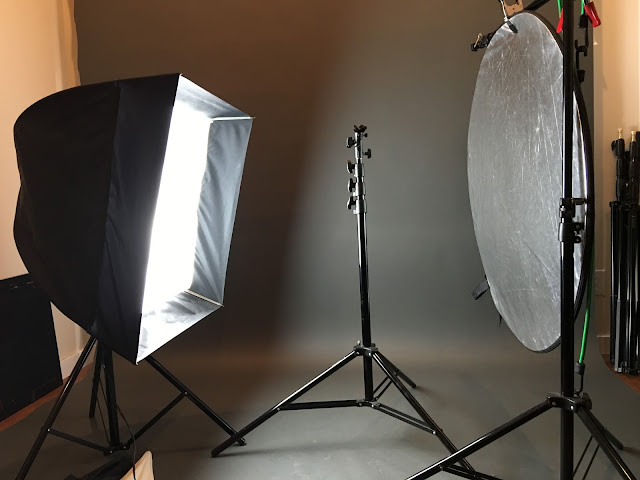 There it is. Can I go home now?

"I bet you're the kind of guy who'd fuck a man in the ass and not even have the common courtesy to give him a reach around."
-Gunnery Sgt. Hartman

So what can we deduce by this setup, beyond the obvious?

Background :: Savage Universal Thunder Gray
Key :: dual CFL with a 650 watt total output modified by the one and only; Westcott 28" Apollo softbox
Kicker :: Westcott 40" 5-in-1 reflector, silver side effective. BOTH supported by our unsung hero, Mr. Stand.

Exposure was up to the iPhone and that gave me ::

Now, I know you gotta be bored with me by now so lets point out what made this possible. If you're like Inspector Gadget, you may have figured it out by now.

I'm sure it's possible but I haven't explored how to pop strobes with Pocketwizards. Maybe it's not possible. Don't know.

So how was the creamy cool light made? Hot lights!

For filmmaking I have and use a bunch of industry strength CFL bulbs. Why? Much cheaper than a few ARRIs.

As for still photography? Shit. You can go back through the 200+ articles within these blog pages and I could bet my left nut that you won't find a single post in regards to still photography where I opted for hot lights over strobes.

I must admit. It was kind of fun and will be explored further. As for you that read here often, no, I'm not being a shit talker. For those human sessions I will never use hot lights as a key. Why? It's a little secret of mine. It's been written about before just no time today to dig into that part of my gray matter.

LIGHTSTAND. C-STAND. You silly schizophrenic, whatever you like to call yourself, we love you!

Our hats off to you.

From all of the filmmakers and photographers around the world, we thank you!