how to take awesome photos of your christmas tree 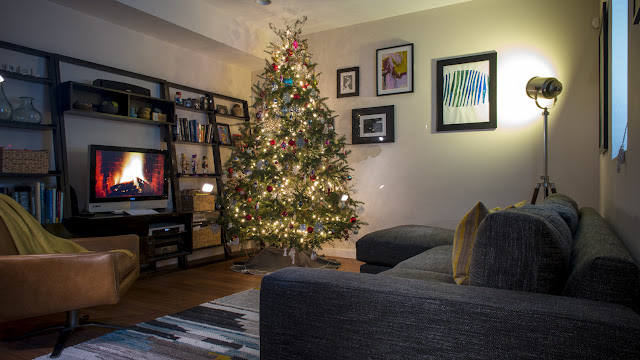 Do your Christmas tree photos suck?

If you answered an annoyed and pissed off yes, then read on how to up your holiday street cred from now on . . .

Why Do Your Tree Photos Suck?

Every year you buy the newest iPhone or Android, each model claiming to have such a better, life changing camera than their previous model. Don't get me wrong, mobile devices are putting out some pretty pimped out cameras these days but they still have their limitations when compared to the world of dedicated photography gear.

Here's How I Shot This Slice Of Holiday Goodness

Humble I'm sometimes not, I know.

So, take a good look at my living room and I'll explain, without getting too tech geeky, how this awesomeness was produced.

Manual control. Knowing I was going to add a complex lighting scenario while also wanting a very deep Depth of Field, I cranked the shutter down to a super slow 30 second exposure. Having said that, shooting in manual, as always, the exposure triangle looked like this :: shutter 30/1, ISO 50 and aperture f/16.0. Again, if you are shooting a mobile device, you may not have the freedom to dial in such numbers.

ISO 50? That's the sensor's sensitive to light. My Betsy (Nikon D4) gets as low as fifty while getting crazy high as 204,800 or some crazy number like that.

Stability? Sheeeiiiittt. I use an entire FEISOL carbon fiber tripod system; sticks, neck, ballhead, quick plate. This beast is not for the faint of heart, or wallet.

Composition? Well take a look. Using the 24-70 2.8 G ED, Nikkor, at 24mm, I stepped way back to get elements of the room into the framing of the shot. This should not be a problem for mobile iPhoneographers as that lens is somewhere around the very wide 15mm range. . . I think. I'm not sure where Androids fall.

Last and most important. LIGHT. For what is a photograph that has no light? This was the trickiest part of the entire creative process. You wouldn't know it but I'm actually in frame throughout the entire exposure. HUH? Yup. At 30 seconds, as long as I kept my body moving around, I would stay invisible.

Why the fuck would I want to be moving around in the frame of the shot? Ah ha!!!! This is where good photographs are separated from the elite group of magnificent photographs. It takes that little extra love. A little turbo charge of the right brain.

During the entire 30 second exposure, I was popping pools of protons (light) around the room. Using a speedlite at 1/4 power, I was popping the pilot while splashing light on the couch, chair, rug and any other part of the room that would pique more interests with a little extra loving. Doing this not only added so much interest to the room's elements but added lots of depth to the photograph as well.

Now, you don't need pro strobes to make this magic happen. Any mobile lighting device can do the trick. A flashlight even.

Think outside of the box. Had I just used the ambient room light? Eh. Pretty boring stuff. Flat. Selectively lighting the room elements was the recipe for success here while in conjunction with the technical decisions.