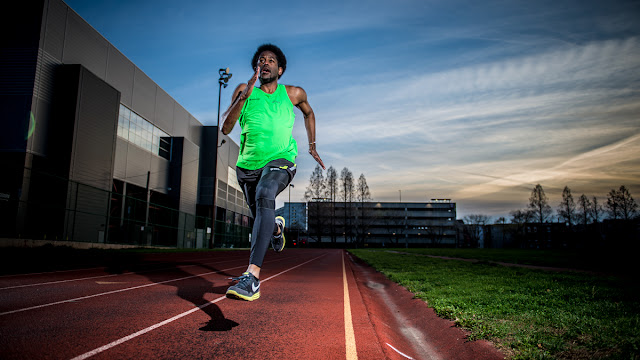 What better way to wrap up a year's end but with a shoot with my homey Mike Gamble. . .

Mikey and I go waaaay back. Back to when we were both wet behind the ears, university-think-our-shit-didn't-shit-punks. Well, the coolest punks you'd ever know nonetheless ;)

While I staked my claim in the City of Brotherly Love, Mikey migrated across the pond, making his mark by way of Sweden. Needless to say, Mikey and I never broke our bond and when he comes back to the states each year we, granted our schedules jive, like to have a shoot conceptualized prior to his arrival. Having said that, and now that I'm thinking of it, although it seemed like last summer, Mikey and I hadn't worked together since the [Koresch] shoot in 2012.

In 2012 it was about form. This year it's about speed and focus. 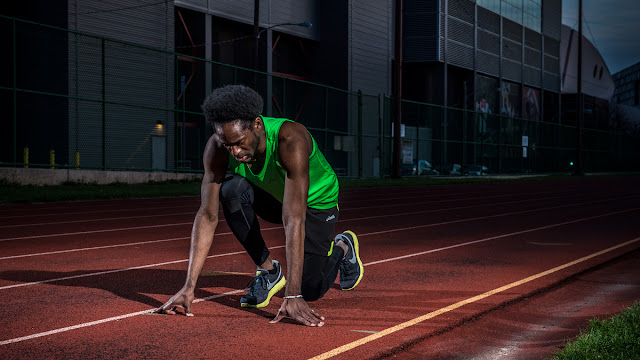 The plan was to get motion and still footage in and around Fishtown, Kensington and Temple University's Track and Field.

[You'll see the film footage soon enough. Relax your asses people. It's in post production as we speak.]

It was around 4:00 p.m., late December mind you, and we had just finished shooting under The EL. Quickly, we loaded up the gear into my Xterra and headed over to Temple's campus.

Before unloading anything, Mikey and I took a walk over to the grounds to drill down our exact itinerary.

Time was our friend and foe.

In terms of lighting, the conditions were about to hit perfection for the vision; GOLDEN HOUR WAS NEARLY UPON US.

The beauty of Golden Hour speaks for itself (refer to opening photo). The only catch with working the gorgeous hues of the dawn or evening skies is that it comes and goes pretty damn quickly. You better bring your A-game or you'll miss its magical qualities for sure.

While the colors would be brilliant, I was also embracing some darker skies as I was packed to the brim with Wizards and Strobes.

So were the conditions pure perfection?

My dumb ass had on only my Marmot shell over my Sriracha T-shirt, skinny jeans and a pair of Chucks.

And I'm complaining?! I know. I know.

Take a look at Gamble. Yo, he is aces every time we work together. In a tank top, you'd have no idea that it was and winter day with temperatures dropping as quickly as was the sun. We'd already been out for a couple hours. We had less than an hour on the Temple track to make miracles come true. 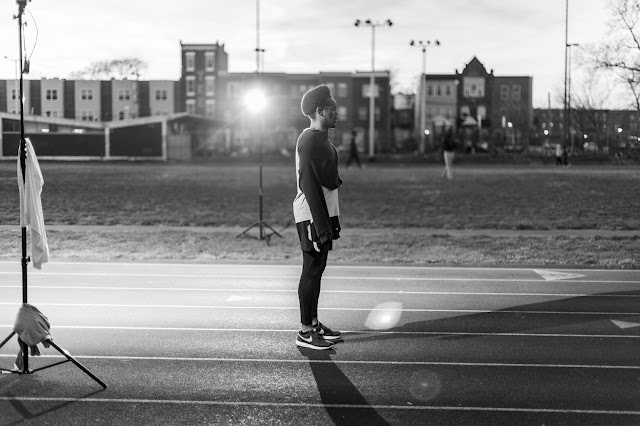 This black and white gives you an idea of what was happening between shooting. While I adjusted exposure and lights, Mikey quickly threw on a heavy sweatshirt with a couple extra shirts hanging on the lightstand at frame left, giving us the option to layer him up if need be.

And below? This outtake of the day's hero? Fuck. He looks to be in down right pain. 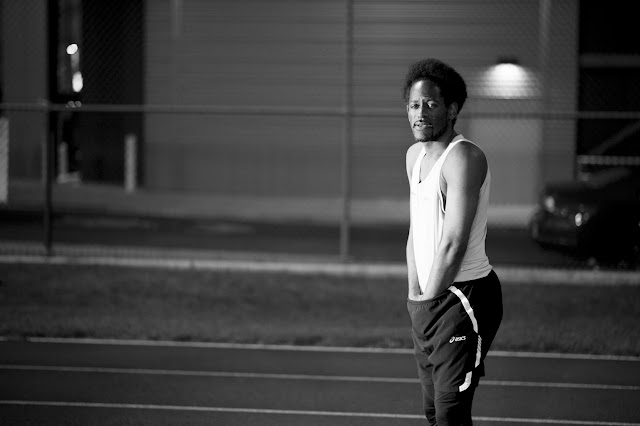 We had to work fast.

Wouldn't be a successful day if Mike had to go back to Sweden with a torn hammy now would it?

Not good for anyone's career, his or mine.

We had to work fast. 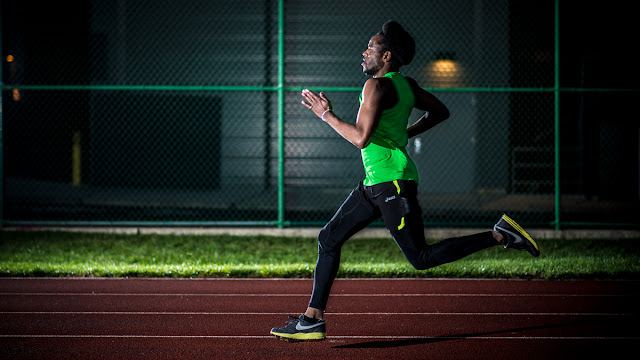 I'm not gonna get too tech crunchy here. There are three photographs for delivery; golden hour, starting line on one knee and profile. Just to clarify to those who may be really confused . . . the black and white BTS shots are not the deliverables.

Having rectified (he eh he, rectified) that let me explain why I'm not getting super duper specific for each deliverable. The easiest way to explain is simple. They all were different setups with different exposures shot in different ambient environments. I suppose I could chart it out, that would be easy enough right? Sure, easy for you to read but more of a pain in the balls for me to create.

Ugh. Fine. Let me figure this shit out.

Although I'm typically a handheld shooter, these were shot atop the super duper awesome sauce king of all tripod systems . . . .  my carbon fiber, float like a feather, sting like a bee . . . . FEISOL.

I love that fucker.

"So what?" You say. I know what you're thinking. tweak the exposure and work some high speed sync on those strobes. Right? Therein lies the problem. I could only at best shoot Mikey at the D4 sync speed of 1/250. Neither my strobes nor my Pocketwizard plus ii transceivers, bless their beautiful brilliance, support HSS.

Was a lack of HSS detrimental to the final product? Not one iota. What the hell is an iota anyway?

Obviously in the kneeling shot, and I was at 1/160 there, freezing motion would be of no issue. As for the speed shots? Puuuhlleezee. Even the Vivitar 285HV, at 1/4 power as a kicker, did a fine job freezing Mike's motion. If you pixel peep the Golden Hour shot you will see a tad motion blur but you know what? That gives the sense of motion and that's a good thing my peeps. It's barely noticeable but look around his shoulders and you'll see what I'm talking about.

Having said that, this would top off the gear list. Wizards did the communication. 285HV speedlite and a non proprietary Canon 430EX ii brought about the protons. As Betsy was perched atop the FEISOL, the strobes were perched atop a pair of 10 footer Calumet light stands.

Last tech spec. Did I get lucky catching our subject as he was catching air while flying down the track? A bit of calculated and controlled luck if you will. As you know I was not working with Profoto packs so recycle times were a slight issue. So I was pushing Betsy to her limits, motor driving her to about 11fps. At that rate with speedlites, I was able to catch a couple frames each round that the strobes all fired. Apply, rinse and repeat. YUMMERIFIC.

Get it? Going that extra mile? Track shoot? I'm here every Monday night. HA! No? Not funny? Hey, gimme credit for the attempt yeah?

What do I mean by going that extra mile? First, let's summarize what we already know. Gamble and I and been outside for some hours. I'm not joking when I tell you that my fingers were so numb that I could not feel my trigger finger releasing the shutter. Further, I couldn't judge how hard to press to achieve a successful release.

Take another peep at The Golden Hour shot and the starting line on one knee shot. You see that camera angle? Yeah. So along with numb fingers, my ass was planed in that gutter along the track. Let me just say that there is definitely NOT radiant floor heat along that track. And my body parts that weren't on the cold concrete were getting nice and muddy and frosty wet via the well kept grass of the infield.

Just as Mike pushed himself on that track all evening, I had to push myself as an artist.

"Better safe than sorry," is a quote for losers and pussies people. It will get you NOWHERE!

You gotta push boundaries and take risks. Fail. Fail fast and fail often. Fall flat on your fucking face, metaphorically and physically. Seriously. Bust your grill up a few times. You will reap the rewards. I promise.

Bring that mentality with you into the new year and rock it out.

Happy new year my homeys and homettes. Love you all.