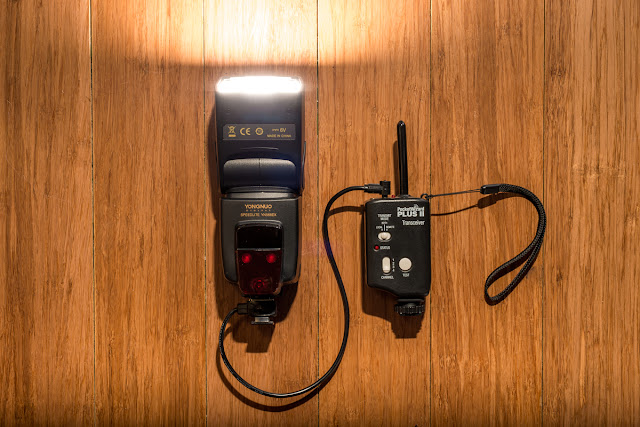 You don't see gear reviews on this blog too often. They gotta be special. And there's good reason for this. . .

What Makes These Gear Reviews So Special?

The justification is twofold.

1. My days of obsessing over gear are (thank goodness) in the past. Thank goodness? As was I, many photographers, while cutting their teeth, become addicted, not only to their newfound creative outlet but to the plethora of gear available to help them "be a better photographer".

There's a certain amount and breed of gear that will help you shape your path along your awesome new journey. I agree. And it's easy for me to sit here and tell you not to get all caught up with the allure of all the shiny gear strewn about the pages of your B&H catalog; I too was a gear junkie. BUT, as I grew, more and more, as an artist, I became less and less interested in having the most toys on the block but rather having the most pimped out portfolio on the planet. I graciously joined the Gear Doesn't Matter camp. Don't get me wrong, I still drool over a particular piece of equipment from time to time but goal number one is CREATING NEW AND AWESOME WORK.

2. The signal to noise ratio is totally out of whack. The internet is pretty fucking awesome but let's be honest with ourselves people. . . There's a whole lotta garbage out there; redundancies.

So this is why I take gear reviews very very seriously. Well, as serious as I can be which ain't all too often.

Having said that, when in fact, there is a gear review within this blog, I try to make it much different than the rest of the noise bouncing around out there.

Search Yongnuo YN568EX and you'll get a thousand links, all sharing every tech and spec that not even NASA would give two shits about.

Wow, that was some intro huh? But one hell of a segue.

I know the Yongnuo YN568EX digital speedlite isn't exactly "hot off the presses" but better late than never, right?

Actually, at first glance, I didn't want anything to do with this brand. Once or twice, I've been burned by tech with too good to be true features and the price points to match. Yup, took it straight up the ass.

So when the king of frugal, David "Strobist" Hobby was singing the praises of Yongnuo, I just couldn't go anywhere near his Kool-Aid.

Don't get me wrong, I've been a part of the Strobist cult for YEARS. I'm not trying to knock his street cred in any way. If he told me to jump, I'd ask "how high?"

When it comes to primary gear such as camera bodies, glass, tripods and the such, I was mostly going with proprietary brands: Nikon, Canon, Pocketwizard, Feisol, RODE, et. al. This was until I discovered the super cheap and uber ugly Vivitar 285HV. Yo! 90 bucks and a brand that has survived for generations?! Fuck Yeah.

Besides the shitty recycle time and limited power ratios, there wasn't much function I couldn't get out of the Vivitar than I could the $400 +/- proprietary speedlites.

As time passed and my arsenal of Vivitar's grew, so did the rhetoric and chatter (time period appropriate words.d I couldn't help myself) about the awesomeness of Yongnuo.

90 bucks for the manual Vivitar brick or about $30 more for the TTL capable brand that appeared out of nowhere, like an apparition in the foggy night. Eh, I'd rather use the extra cash for a couple orders of mussels at Monk's Cafe. #JustSaying.

Well Spank My Ass And Call Me Sally!!!

A few months ago, I found myself possibly needing the option to shoot TTL.

Shhh. Don't tell anyone. Strobist cult members like David Hobby, Zack Arias and myself usually shun the people who use TTL. Joe McNally you say? He uses TTL? Yeah. I know. But McNally is a freak of fucking nature. He doesn't count.

So I bit the bullet and ordered the Yongnuo YN568EX (Nikon compatible model) from the B&H app on my iPhone 6s Plus.

The next day UPS was knocking at the door. Such an awesome feeling, getting a new package, isn't it? I'm such a child.

Upon unboxing here's what I found without giving you every tech, spec or quantum physics of course ::

I'm not going to compare brand names here but let me just say the Yongnuo build is hands down, the best I've ever put my hands on. Smooth. Solid. Tight.

The Yongnuo has all the features of a SB-910 AF while having the price range of the bare boned, featureless, 285HV.

Look. If you've been a reader here, you sure as shit know I didn't have a team of scientists calculating precisely how long recycle times are at each ratio, with battery types, barometric pressure, altitude and all that bullshit. Nope.

I break it down for everyone to understand.

On full juice, at 1/1 it takes a few seconds. Even the best speedlites take a few seconds to recycle at full power. Unless your popping Profoto or Broncolor strobes, thousands of dollars per pack, then you'll have to deal with waiting a few seconds. No big deal. And you know what? Besides popping the pilot for the purposes of this article, I can't tell you the last time I used any strobe at full atom splitting nuclear power. In the studio, I'm usually flying around 1/16-1/4. At those levels on full batteries, I'm feeling like Chase Jarvis on the slopes with his Brons, "strobe, strobe, strobe, strobe, strobe, strobe, strobe," all day long. Ok, maybe not that fast but at a very very comfy level that I can have the models hit a whole bunch of poses before taking a break for recycling.

A lot of people may talk about quality of light or temperature. Guess what? It's all how you modify your light. Yongnuo or Profoto, light is light. Where and how you use those protons is what matters. I promise, you stick the $100 strobe in the same Octa as a $2000 head, at the same power ratio, and I promise the results will be the same.

Ok, so maybe temperature can vary from brand to brand, strobe to strobe but I've never really ran into any problems that I couldn't manipulate in RAW.

I fell in love with Yongnuo. For strobes, it's my new go to brand. Yup. Love.

You think I'd leave you hanging without some juicy stuff? 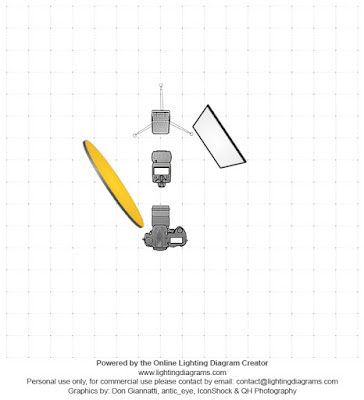 Need I say more? The diagram pretty much sums it up, no? Look people. Let's be transparent here. I've typed a lot of words in this post and I'm sure your getting tired of reading them as my fingers are getting tired typing them.

So there it is. The lighting diagram just about explains how I shot this style of KNOLLING photography.

Had your fill? Me too.

P.S. To all you pixel peepers. If you zoom in to the photo and see dirt, scratches and dog hair on the floor? So sue me. I didn't feel like sweeping in real life or in post production. Deal with it!