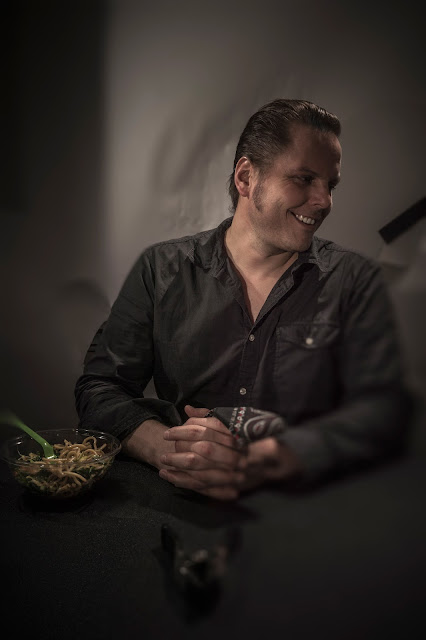 Although the Thanksgiving leftovers didn't begin as a food photography tutorial, over the last two holidays, it was just that. More importantly, I was building legitimate leftover sandwiches filled with dried out turkey, lumpy potatoes and other Thanksgiving accoutrements.

Guess what homeys and homettes? One of two variables caused the lack of tryptophan treats herein today.

2. My fat ass ate the savory sack of scrumptiousness rather too swiftly.

[New around here? I can be a real nerd, hence the forced alteration.]

So what happened? Why, on this fifth Thanksgiving Leftover post, is there not a sloppy sanwhich lying before your eyes?

After careful evaluation I came to the conclusion that I fell victim to both variables.

What Have I For You?

Come on people! You really think I'd cash in the post holiday post due to a lack of ingredients. Fuck no.

Awaking this morning, knowing I was in a pickle, I began to juggle the big marble between my ears to quickly come up with a worthy article, for you.

On the way to HipCityVeg, stomach craving the udon noodle salad that my wife had just sold me on, I had an epiphany. Ok. Maybe not a Nobel Prize worthy epiphany but a moment of brilliant clarity nonetheless . . . and I'm not talking about the Scientology, LRH, type of wacko shit. Rather, it was just one of those creative smacks in the face that stings like those that S&M practitioners would sever a nut to experience.

Don't like it? You are more than welcome to point your cursor to that X at the upper left hand corner of your monitor. No hard feelings. XO.

The Ever Elusive Self Portrait

Sure, over at my Instagram page, there's no shortage of selfies but here on the blog or over at the portfolio, you don't get a whole lotta me.

Although selfies are technically pretty easy to rock out, setting up the studio gear, working poses, light and all those other little goodies that make for awesome photography, can sometimes be a bit of a challenge.

Think focus. Can you imagine what a pain in the balloon knot that is? Today I said fuck it and let's bring on f/22.0 without a focus frown for fathoms. ;)

I'm lying. Still gotta lock down a focal point to some degree.

For these reasons I often shrug at the idea of proper self portrait sessions but on the other hand, they are a fantastic way to experiment with light and creativity.

For some reason or another, I oft end up "channeling my inner Dan Winters" when engineering the self portrait strobe setup.

Here's what went down :: 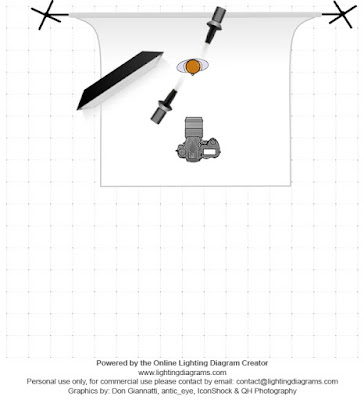 Nerd talk about to begin. This is where my friends who aren't photographers or filmmakers tell me they quit the article. Hey. I get it. But if you are even slightly interested in improving your image creating abilities, then hang around. Learn some shit.

The big mod? That's the Westcott 28 inch Apollo softobox. My fav mod in the arsenal, the fill. I had this baby feathered way on the bias. Notice in the diagram how it's barely clipping my melon. In the actual image, what this light is doing, you can see, is falling off the background camera left while giving a rake of soft light, underexposed somewhat, across my torso, head, hands and udon noodle salad from HipCityVeg.

We will call the snooted strobe at camera left, the key light. Snooted light is basically a funnel narrowing the beam of light, like a laser. I aimed this flash towards my head. That's where my upper chest, neck and cheek are brought up to a nice even EV.

Last is a kicker, hair, rim or whatever the freak you want to call it - also snooted. I dialed that in to the same setting as the key.

This department I keep pretty limited these days. . . But not on this Thanksgiving weekend.

Exposure was only in need of a .80 kick in the head. For some reason, Bridge, although it may be a figment of my imagination, seems to counter the exposure by about -0.80 stops of light. Who knows.

As for some special effects? For some reason, I went out of my normal comfort zone and exported to Photoshop to pop in some tilt-shift blur.

See that blurry object in the foreground? It's an A-clamp. Why? why not.

I've since cracked open an adult beverage during the writing of this quasi tutorial. I don't want to get too deep here as the post may inherit a slew of grammatical and spelling errors that, now, I really don't feel like proofreading to verify.

Oh, and if you wanna enjoy the other Thanksgiving Leftover posts from years before, you can check them out here ::