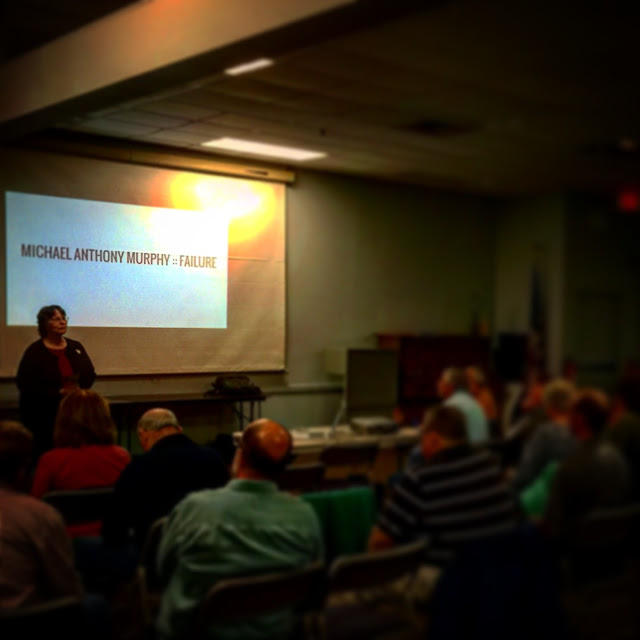 Year after year I promise to myself and more importantly, to YOU, the super terrific and uber duberly awesome readers, that although my content is πRAD², in today's short attention span theater, some think I can get a tad wordy. . . as I am right now. Long story short. Too late right? I think going forward the posts will, and I mean it this time, be getting lean and mean. I mean there can be no money back guarantee but the odds of leaner and meaner have never been better. How so? #H™is how so. If you isn't in the know then you better check yo self before you wreck yo self.

Yep. Believe it or not, yours truly took the stage to publicly drop bombs of knowledge. The same bombs that have been getting dropped here for over five years now.

"According to most studies, people's number one fear is public speaking. Number two is death. Death is number two! Does that sound right? This means to the average person, if you go to a funeral, you're better off in the casket than doing the eulogy."


That quote stuck with me the sleepless nights leading up to the big evening.

Prior to the event, the last time I spoke publicly was in college. And that was a long time ago my friends.

I found myself sitting in the Xterra, on the side of a mini mart, in a Sunoco gas station, somewhere along route 73 in Burlington County, New Jersey.

My call time? 7:00 p.m. I was just a few miles from the venue with nearly an hour to do whatever deemed necessary to pull this off with the least amount of casualties.

So what does one, like myself, do in an SUV, creepily parked along side of a service station's market? LMAO. Stop that you sick fuck! You! Yes you. Perverted minds. I'll tell ya.

Besides the fact that this was the fastest the minute hand has ever swept the face in my lifetime, I quickly tried to get in some practice and meditation while nervously sipping a large black coffee and sucking down sunflower seeds, shells included (it's my favorite part).

At the venue parking lot, just before exiting the car, I repeated to myself as a Periscope follower and professional public speaker advised me just hours before . . . It is what it is.

Now, It was not meant to be internally recited as a negative mantra although it may seem to have that tone when read on paper. Quite the opposite. Basically, in those five short words, it means that it's showtime and there's no turning back now. Get in there, kick ass and take no prisoners. At least that's how I understood it.

After pacing around for thirteen minutes, I felt maybe it was time to start the show. I mean, I never did this before. Shit. I'm the speaker so I suppose I should speak. My Macbook Pro was tethered to the overhead projector, Keynote was running and the remote control functioning. Seemed as if most people had taken their seats. Some people were still filtering in but the clock was ticking. The show was to start at 7:00 and that had come and gone.

Let's get this party started, right?!

Whew. Luckily, as I was about to make a damn fool of myself, the emcee introduced herself to me and explained the processes for the evening. One of those processes being her introducing me to the stage.

The emcee gave an intro that was, oh, I'd say a minute or so. It was all a blur but between her closing and my approaching the stage, the applause had assured me that she must have said some pretty awesome things.

Then. I did a self audit of sorts.

I so want more! Besides creating works that move people emotionally, one way or another, taking the stage to educate and share the experiences was pretty bad ass too.

So you need a speaker? Hit me up people. This beast is unleashed and I wanna drop some sick bombs of knowledge on your skulls.