5 year anniversary post!!! :: an some talks about this thing called knolling photography 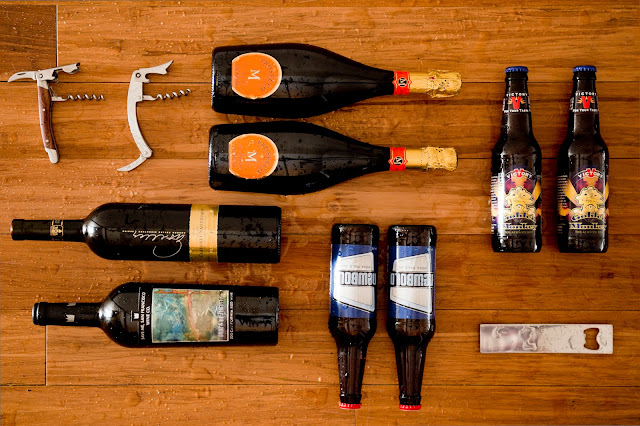 Well belated anyway. The official 5 year anniversary of this blog is, or was, July 15th. Seriously though, how many of you fuckers really read my posts the day they are published and launched?

So I'm 3 days late. Deal with it! How late are you arriving to this earth shattering article?

Holy moly. I'm not going to bore the shit out of you with reminiscence of our, yes mine and your favorite posts. Nor will I sob over the less than awesome articles. I've certainly committed these crimes via past benchmarks.

I do want to give a shout out or two.

You know what? No I don't. That's would turn this into a totally mushy and typical read.

Without getting personal, you all know who you are. THANK YOU! LOVE LOVE!

Seriously though, without the support of my family and friends (that's you!), I would probably have never made it here; 5 years and 200+ posts! Crazy town!

We are headed in the right direction. More signal. Less noise. Continually pumping out AWESOMER and AWESOMER (I know, not a word but it caught your attention). And more video. Obviously the production time for film is longer than stills so the ratio will favor the stills but wait until you see the next couple projects to soon be released. Oh yeah baby!

[Hey Simon! Let's get the lead out of the ass brother!]

Inside joke. I hope he reads this! With love I say that brother. No worries. All love.

I really want to pull back on my vulgarity but it's tougher than I thought. You see, I write exactly as I shoot, from the heart. I don't self sensor as that will put a kibosh on the creative soul.

If you have a problem with the harsh language you can send your grievances to PoorYou@NobodyCares.com

I guess I'm super pumped to be writing this, here in my studio, completely surrounded by gear and the thoughts of "HOW THE HELL DID I GET HERE?!"

Awesome stuff. The journey is long and rough and I see no end in sight. Just gotta tighten up the Merrell's and continue along this road less traveled. I highly recommend. Amazing if I must say.

Woah. I'm drifting towards a huge and superfluous digression.

Wanna Talk About The Photograph?

It's what is called KNOLLING PHOTOGRAPHY. It's being used more and more in advertising works. Thumb around your Facebook stream and I'm sure you'll find an ad or two shot like this. Even editorial posts have taking a liking to this style.

So what is it?

Google defines KNOLLING as the process of arranging related objects in parallel or 90 degree angles  as a method of organization.

Now that you are in the know you can view this photograph and know exactly what you're looking and and most importantly . . . WHY. You can wow all of your friends at the next dinner party with your artistic knowledge of the advertising industry today. You can be Don Draper and we all know Mr. Draper gets more action than Lexington Steel in a Vegas brothel on a Friday night. Just saying.

After you ponder that simile, let's dig deeper.

There's more than meets the eye in this photograph my friends. Not only does the content work well together but there's context within as well.

Save Me San Francisco Wine Co. / 2012 California Red :: Well, maybe not all the bottles have deep stories but I do recall the owners of this company having a groovy background. I just totally forget but it did inspire me to buy this bottle.

Peller Estates / 2002 Cabernet Sauvignon :: This bottle was bought when Stefanie and I were married nearly seven years ago. We spend the day touring the wineries of Niagara On The Lake, Ontario Canada. This vineyard was one of our favs for sure. I highly recommend.

Proseco / Merum :: My mother brought these bottles of bubbly on the day of our daughter's (#H™) birth. Are we aging them? I'm not sure yet.

Victory Brewing Co. / Golden Monkey :: I warmed up to the Victory Brewing Co. back when they were a barely more than a home-brew company and I, back then, a newbie beer snob drinking only local and imported craft beers. Some things don't change.

Bottle Opener :: Tricked you. You totally thought another useless space filler like the corkscrews. Nope. This opener was one Stefanie and I used to share back when we were working behind the oak, slinging drinks at Roosevelt's Pub (out of business now) at 23rd and Walnut St., Philadelphia. 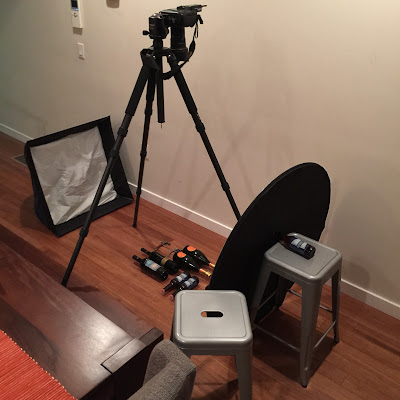 In terms of set, nothing sexy here. I love the bamboo floors of my home. They've proven to be quite versatile for backgrounds.

Far left? 28 inch Westcott Apollo softbox. My favorite mod. Inside is a 430ex ii speedlight speaking with Betsy via a pair of Pocketwizard Plus ii transceivers.

Leaning against the bar stool is a 40 inch Westcott reflector. I think it's a 40 anyway. Silver side out. Notice a bottle of Newbold helping to force the reflector in a more perpendicular position. Improvise people.

I splashed some water on the set, not only for effect but noticing the floor and bottles were a little dusty, the droplets did a great job as camouflage. More improv!

I'm not perfect! See that Monkey on the left? Holy shit, not even sure how I let that specular sneak by under the radar. Not so bad that it wasn't usable though. I'll take it.

Eh. Not too much. You know me. Get shit right in camera, or as close as you can. All's that was done in post was an exposure tweak while crushing the blacks a bit. A bump in vibrance and sharpening then called it a day.

As tedious as it may be, keep your lines straight when it comes to KNOLLING PHOTOGRAPHY.

Now excuse me, I gotta crack one of these bottles.