Talk about a bold title; "I'm NOT perfect." "Way to reel in the readers Murph," may be your immediate neurological response. As would be mine. I mean, think about it. I'm the dope playing Russian Roulette with my social status; my clout if you will. . .
WHY?! 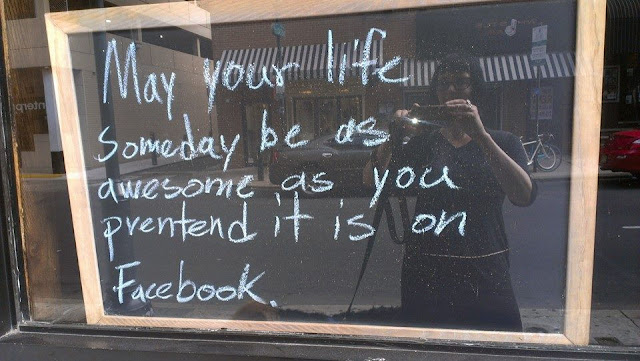 Not only did this photo make me piss my pants in laughter but it also bolstered my inspiration to create today's post, I'm NOT Perfect.

I mean does that quote sum up the world in which we live today or what? Imagine what they'll think of our civilization a thousand years from today.

The point is, there's a whole lotta bullshit out there. President Obama once referred to the Internet as "The Wild West." I can't say I disagree although over the years it has calmed down a bit. No joke, in the early 2000s, you could easily order narcotics and real steroids from your favorite website, no questions asked. Um, let's just say I heard stories. Ahhh, the good old days. We They all knew that the good times would come to an end sooner than later. You just had to cross your fingers hoping the UPS guy wasn't really a DEA agent in disguise.

I'm really detouring a lot today. How the hell did I get to narcotics from Facebook. Oh yeah. The Wild West.

Back to the quote. As there is a lot of bullshit out there on the social sites, there are also those who have developed a keen bullshit radar to counter the mongers of lies.

From the B.S. sales pitches to your great uncle Joey selling you on his awesome trip to Vegas, leaving out the parts where he not only contracted Chlamydia from the hermaphroditic hooker but the trick robbed all of the 50 bucks he had left in his wallet after pawning and losing everything else at the Bacharach table. What happens in Vegas stays in Vegas, right? But on the ole' networks, uncle Joey looked like Danny Ocean tweaking out after a magnetron bomb hits his favorite city. Just Saying.

The bullshit is out there and it's in big supply but many some of us are smart enough to detect this disinformation.

This, finally, now, brings us to today.  Whew. What an intro!

My friends, I'm far from being perfect. I've said it many a post: I don't frolic with unicorns farting cinnamon and rainbows.

I'm of the transparency camp.

Not the old overhead projector types (if your as old as me you know what these are).

The transparency I speak of is the truth, even when it sucks. If you've been a reader here you will know how much I've embraced failure to better my skills as an artist. Some fails small and irrelevant while others have been massive destructors of the universe. Either way, I don't hide shit.

Let's move onto today's photograph as the perfect example for my lack thereof, perfection that is. Before I do, the lesson to be learned is how I made chicken salad from chicken shit.

Eric J. Gerchberg. When not slingin' the most dope dwellings and pimp properties in Philadelphia, Eric spends his time with his awesome wife Melanie and their precious pup Prudence. I'm horrible at writing bios.

If you're in the market to buy or sell in or around Philadelphia, check out Eric's website [HERE].

Eric and I go back some years. Scary how long now that I'm thinking about it. Damn. He and I share similar interests. We like the best foods, finest ales and most importantly, we both like jacking up our adrenaline via the uncharted powder of any mountaintop we can get our gear on. Is it winter yet?

See, told you I suck at bios. That sounded like a bad episode of The Love Connection circa 1981.

It was a Saturday or Sunday. The weather in Philadelphia couldn't be better (besides a blizzard of course). What better day for my homey to be showing a condo on the 40th floor or 2 Liberty Plaza. This is the type of digs that, if you are single and invite a first date up for a cocktail, their clothes immediately fall to the floor upon crossing the threshold. Yup. Serious stuff my friends. Sub Zs in the kitchen and views that make your toes curl.

After I drooled on the windows a bit, it was time to pull out the workhorse, Betsy (Nikon D4). Not only was I going to get some breathtaking cityscapes, I was going to run an impromptu corporate headshot session.

Here's the opening photograph, the winner from the day.

Looks sweet right? Liberty One in the background, ambient light diffused by some light cloud cover and the bow tie tied like a champ. The shot is framed perfectly, eyes follow the rule of thirds and his posing is perfection. So what went wrong?

These conditions? Horrific. there were two options here.

1. Expose Eric's face properly but blow out the background :: 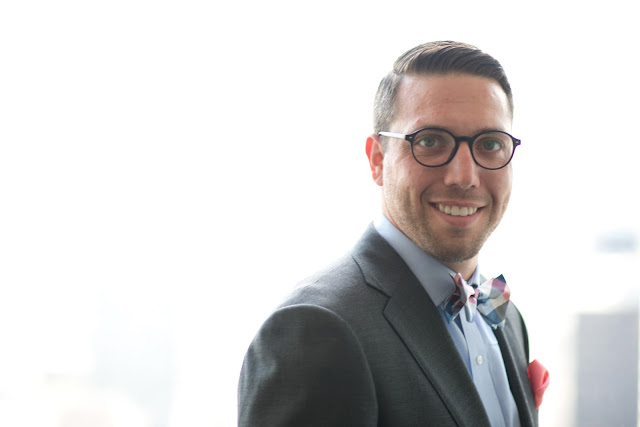 Likely the safe route but WTF is the point of being on the 40th floor if there are no context clues for the viewer to make that decision? 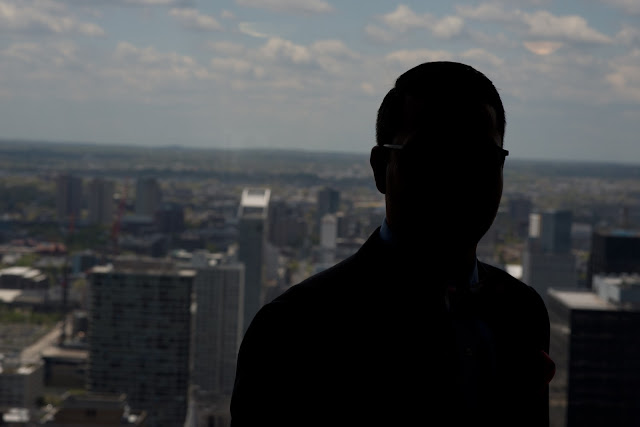 At this point my histogram was screaming for mercy. The shadows were clipped something inhuman. Bridge's ACR editor may kick my ass for trying to save this file BUT. . .

I could play somewhere in the middle and push the crap out of the RAW file, later.

So I found this happy (ish) ground :: 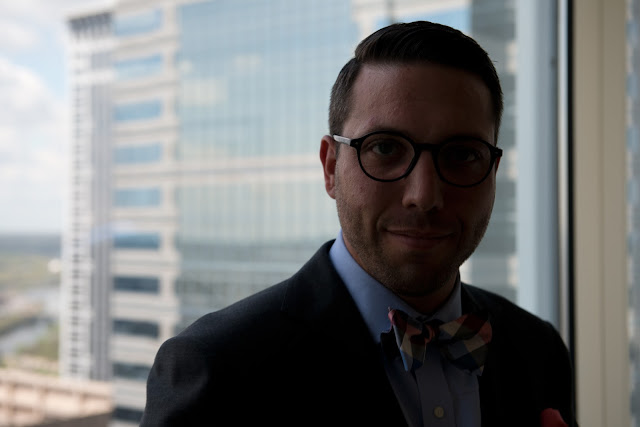 Underexposed. A lot. But still nothing was clipping. The steam started to dissipate from Betsy's histogram.

With a bit of finesse? Whammo Bammo and Abracadabra!

You're asking yourself why I couldn't get this exposure in camera.

Here's what went down and the histogram references are vital to my explanation. Learn and love your histogram.

Under preparation. I didn't anticipate the headshot session prior to packing. Thinking I would just shoot some landscapes, I packed only Betsy's beautiful body and a few select pieces of glass, NO STROBES, NO MODS.

Yup. a simple fill light would have saved a TON of headache here. Shit, a reflector would have been more than adequate.

So unlike me to leave all lights at the studio.

In the heat of the moment, I had to figure things out. So many things in this creative field bear repeating. Right now, let me reiterate the power of intuition and improvisation. Priceless.

Holy Moly I wrote a boat load today. I gotta wrap this up.

All hail the RAW file!