journey into the mind of a man on a mountain 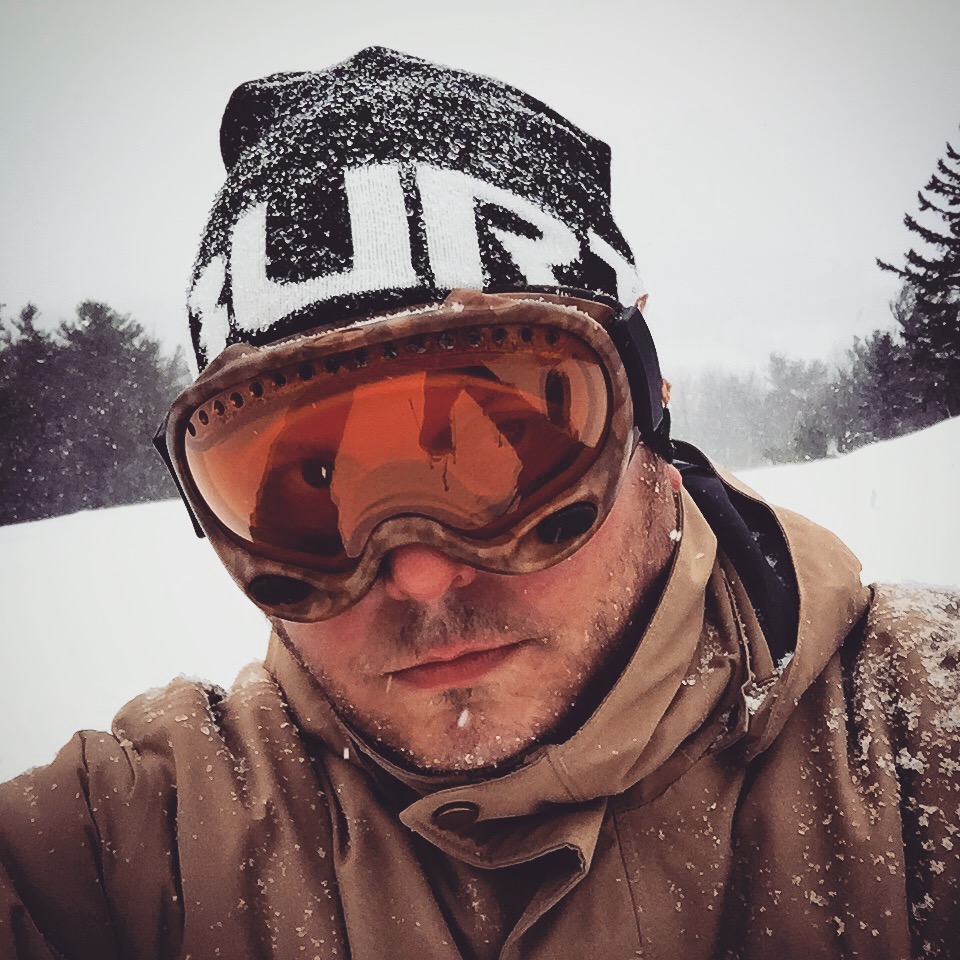 Seriously? You think I'd really drop the ball and call it quits? Not a chance in hell. You should know me better than that by now.

It was a couple weeks ago when my younger sister, Morgan's interest had become piqued about my experiences on the snowy slopes of the east coast.

Within minutes I realized it had been damn near 15 years since I locked my boots into a solid set of bindings. Immediately, I recalled the purity and awesomeness of skiing; the beauty and the beast.

Without hesitation, I offered Morgan a weekend atop of Big Boulder in the Poconos.

A Spark Was Ignited

Back in the day, I never actually skied in a politically correct fashion. It was my super baggy jeans over a pair of sweats over a pair of Long John's. The coat? Who knows. Back then it may have been a black leather jacket. What a douche.

Ok, so I tried to get away with the same behaviors just the other day. When Stefanie, my wife, asked what I would wear on the mountain, I described only a mildly better, hipster version of my younger days.

As Stefanie is a total slope junkie snowboarder, she all but divorced my ass for even considering wearing jeans on the mountain. 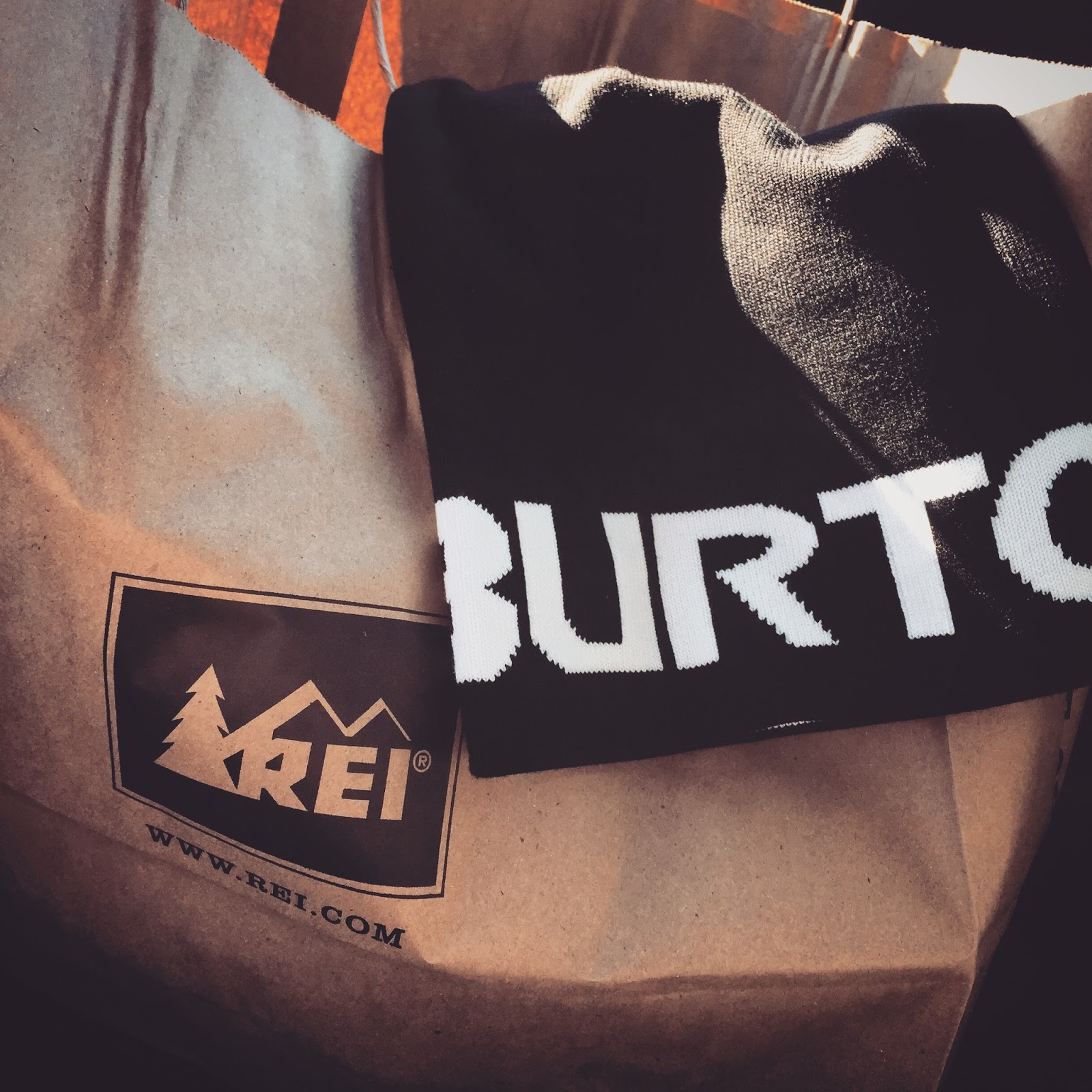 Off to the stores I went.

Nearing the end of the season, I didn't want to drop a ton of money on ski gear. Shit, I totally thought that I would wear the gear once and pack it up for good. Why waste that kind of bread?

I went straight to Target. Ha. Yes. Me. Target. Quite the paradox as I avoid that place like the plague.
Target? Zero winter clothing on the racks. Damn.

I headed across the South Philly parking lot to Modell's. Surely a legit sporting goods store would carry ski apparel in the middle of winter.

On to City Sports at 1608 Walnut St. it was. Oh, if you didn't notice yet, progressively, each store's brands and correlating prices increase exponentially.

City Sports? Slim pickins' but I was able to score a bad ass pair of Avalanche ski pants.

Coats, hats and gloves, well, as they were also clearing out, choices were getting scarce.

Against my gut, I hit the highway to head over to the king of extreme outdoor gear, REI. Oh boy. My wallet shivered in fear.

Seeing a pair of $400 ski gloves made my stomach a little worrisome.

Moving into the store further I was taken right back to my days of avid skiing. I was back. I knew it almost instantaneously. I drooled over the boards and skis. This could get bad.

I walked out with a bag full of Burton and Marmot gear. For sure I would look pimp as ever on the mountain top. 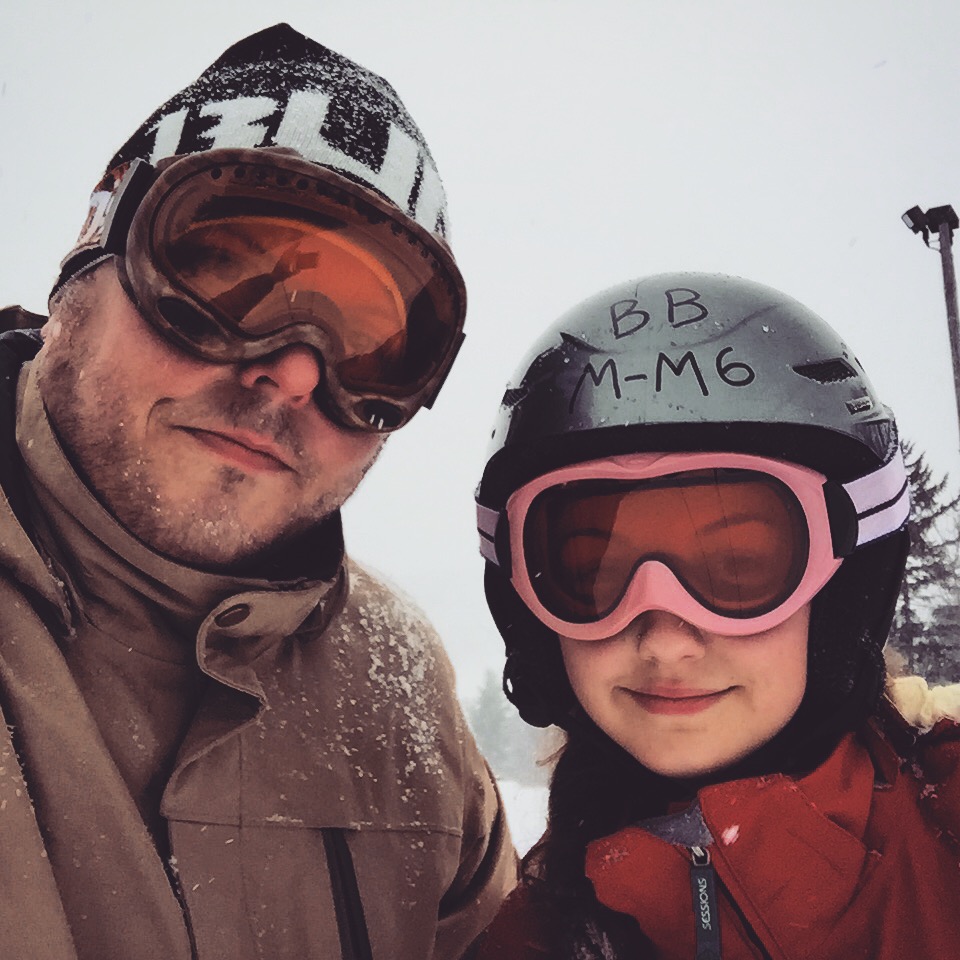 I did have a few agendas that weekend in the Poconos. Not only would I have little sister crushing the Black Diamonds on her first day out but as you would expect, Betsy would be going for the ride of her lifetime as well.

Who's Betsy? To the newbies here, she's my workhorse, my Nikon D4. Did you think I wouldn't incorporate photography into the post? Puuhhlleezzee.

Along with a shitload of warm clothing, I packed the easily portable and super waterproof Kata bag with a minimal amount of gear.

People, every piece of gear I own is insured with the awesome people, namely my representative John Flaherty from the Havertown offices. My point? If your super expensive gear isn't insured, don't blame me if you crack a lens on a rock.

Snow was falling pretty steadily the entire ride. Road conditions? Shitty. You know what that means to me? The mountain conditions would be awesome. It's been a while but I knew that fresh natural powder beats the processed stuff any day of the week.

Winding around the gorgeous S. Lake Rd in the Xterra, 4WD in engaged, with Lake Harmony and Big Boulder Lake in the foreground and Big Boulder Mountain in the background, my mind and being were transformed.

By 8:30 I had taught Morgan to lock into her skis, fall down, walk (if you can call it that) and stop.

At this point I kept Betsy in the Xterra as I was sure I could crash and burn, hard. I wanted to reintroduce myself to her sheer mass before stupid risks. Risks? Yes. Stupid-know-you-will-bust-your-ass-risks-with-gear? Not so bright. 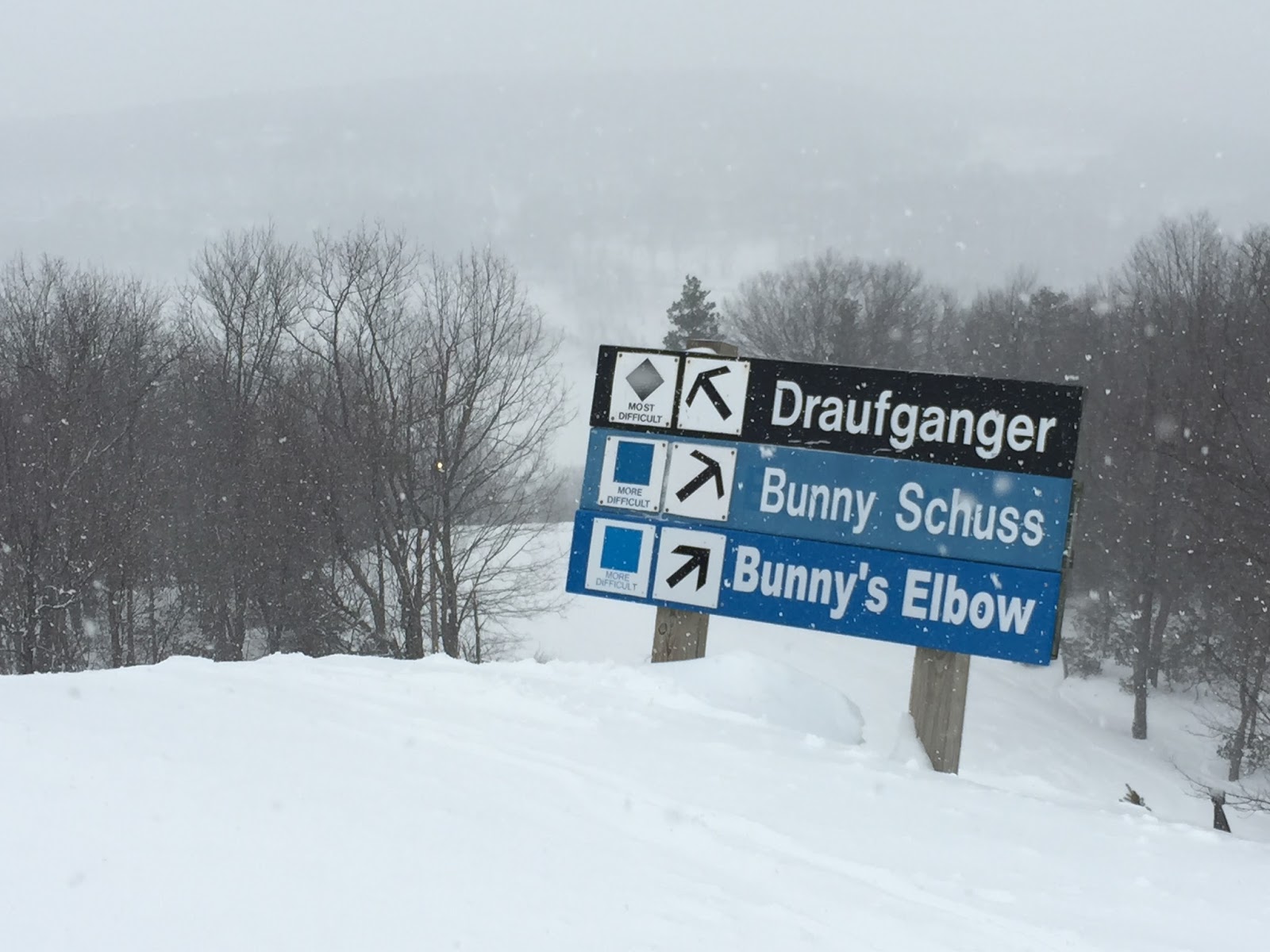 Morgan, as expected, took more than a few face plants on her first run which on the Bunny Schuss, a Blue Square. Yes, taught her as I learned, go big or go home. Skipped the kiddie slopes and right to her majesty's peak.

Me? Miraculously after only one wreck, I was back in the groove!

It was time to convince Morgan she could hit one of the more forgiving Black Diamonds. She crushed it!

By this time I was fairly comfortable with Morgan's skill level and I could really focus on the day's goals.

What changed? Why no Betsy?

With Morgan's new found skills and mountain independence, I got lost. Figuratively speaking. 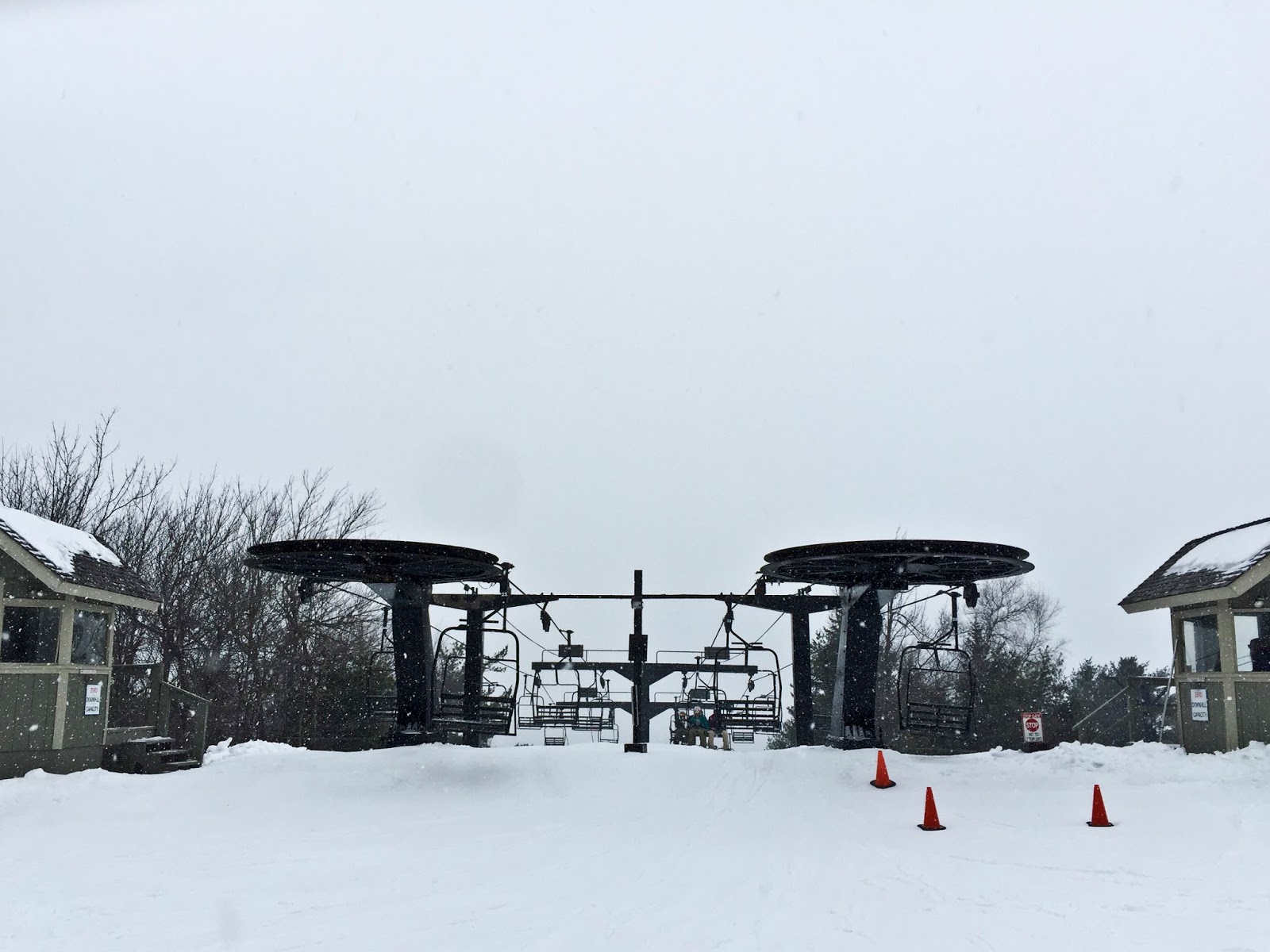 Yes. I realized this day was more than a simple day on the slopes. It was a physical and spiritual awakening.

I'm not sure how long it takes, getting from the ground to the peak but riding the lift serves as a primer for getting into a meditative state.

After the aged wooden seat knocks my ass into the seat, steadily, I make my way to the peak. Dangling about 30 feet from the snow below there is nothing left but the sounds of snow dotting my clothes and the uniform creaking of the steel cables as they make their way through each iron articulation.

About half way, I think but not sure as the peak isn't visible. I turn my head and see the world below fade far far away. My mind is so calm that the weather is of no thought. -10 or 100 degrees I didn't feel a thing, just peace.

The seldom sounds of skiers or snowboarders sweep past on the slopes surrounding either side of my soaring soul.

As this mental ride ends another begins.

With all arrows pointing towards Black Diamonds, so do my skis.

At this height the winds, whatever temperature they are, come across my face pretty intensely. I embrace every second of it as I look far off to the white washed horizon.

My heart rate increases as the vertical drop that I can't see lying just ahead will challenge every inch of my physical and mental being.

Will this be the run that breaks my back? Will these speeds crush my clavicle?