gear matters :: 4 things that every serious photographer should keep in their bag 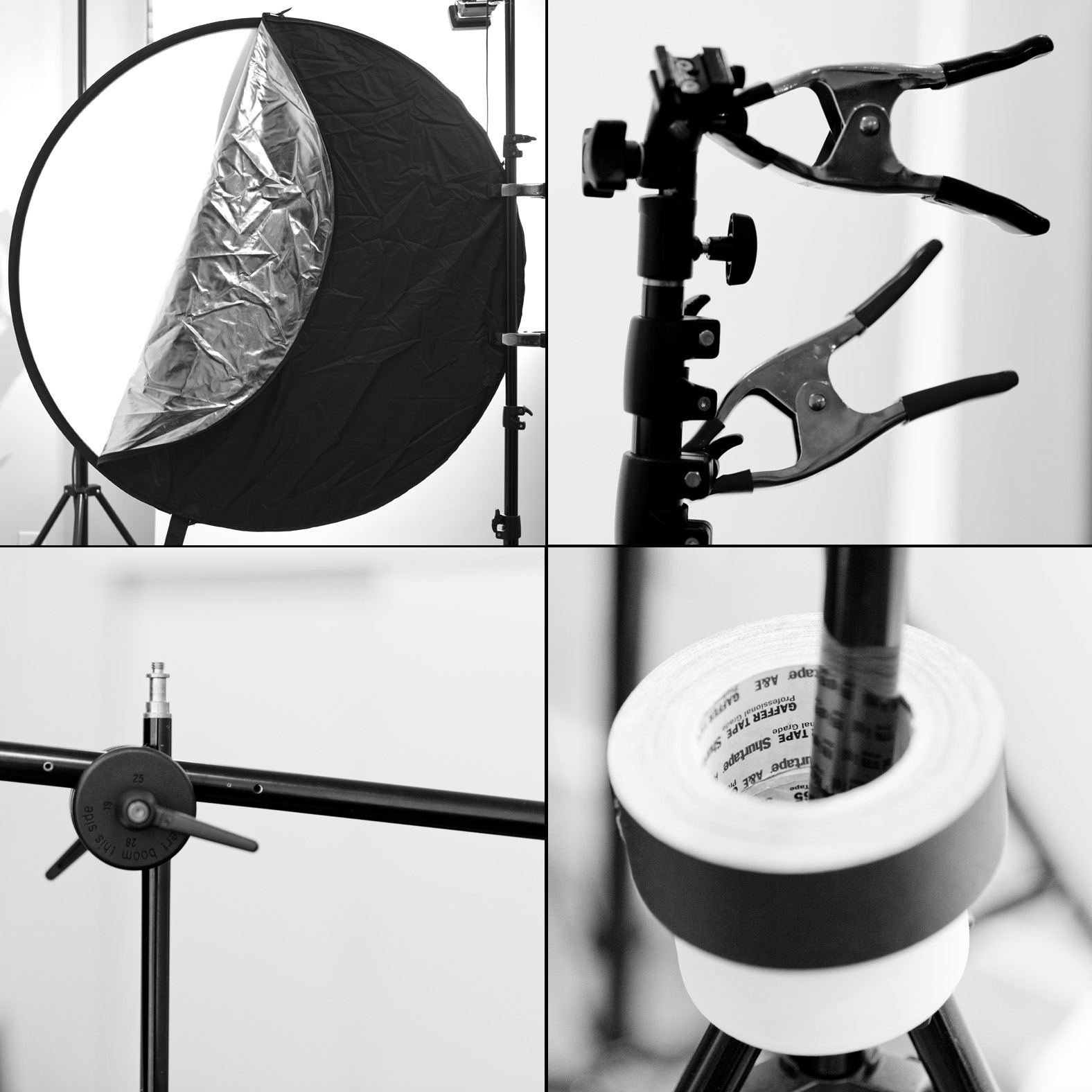 Every photographer has their list of "go-to" gear; the can't live without gear.

But These Photos Don't Show Anything Sexy

Of course I could sit here and share with you the super expensive gear; the big bodies, the fast glass, the carbon fiber sticks, sure, but those are the obvious tools. Today, it's about the little guys. The underdogs. The behind the scenes stuff. The stuff that gets little credit but when they are needed, are priceless.

Without further ado (and in no particular order). . . 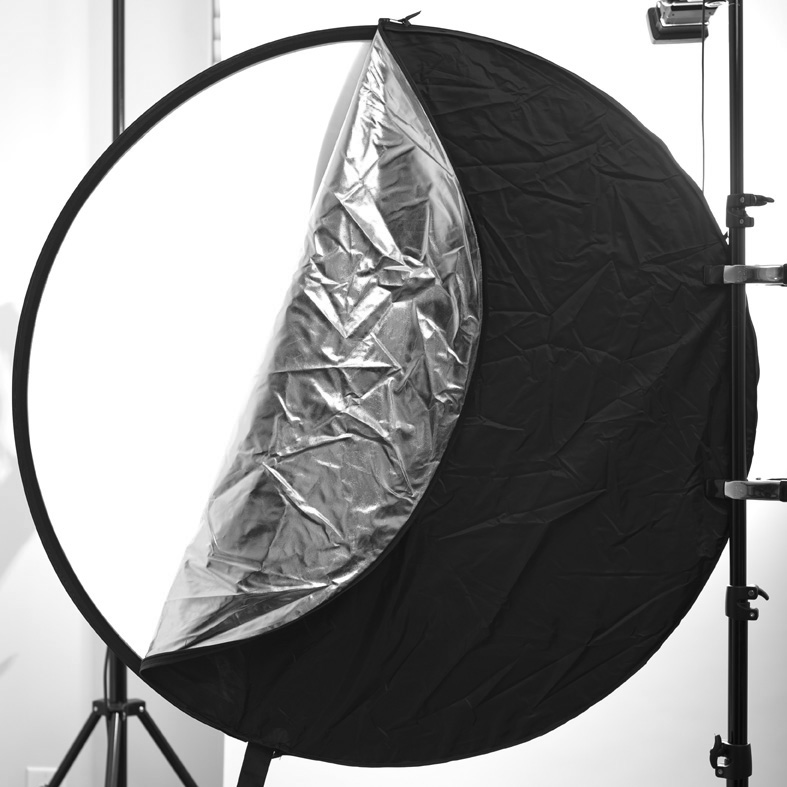 In my photo career, from clients to equipment, I tend to go ass backwards from time to time. How so? Well, first of all, I skipped right past weddings and straight to the commercial work. Further, I went straight ambient only shooter moving right into studio styled lighting, skipping over the normal progression of ambient, reflectors, strobes. But holy shit, when I finally broke down and spend a mere 50 bucks on a 40 inch convertible reflector, I didn't realize what I was missing.

It's 50 bucks of awesome light people!

Whether working with a strobe or the sun, used properly, this invaluable piece of gear becomes a very usable and efficient second light source.

Even more, with the convertible 5-in-1 type that I use, you get just that, five different ways to modify your light: translucent for shoot thru purposes, gold for warm fill, silver for more punch, white for softer light and black as a flag. 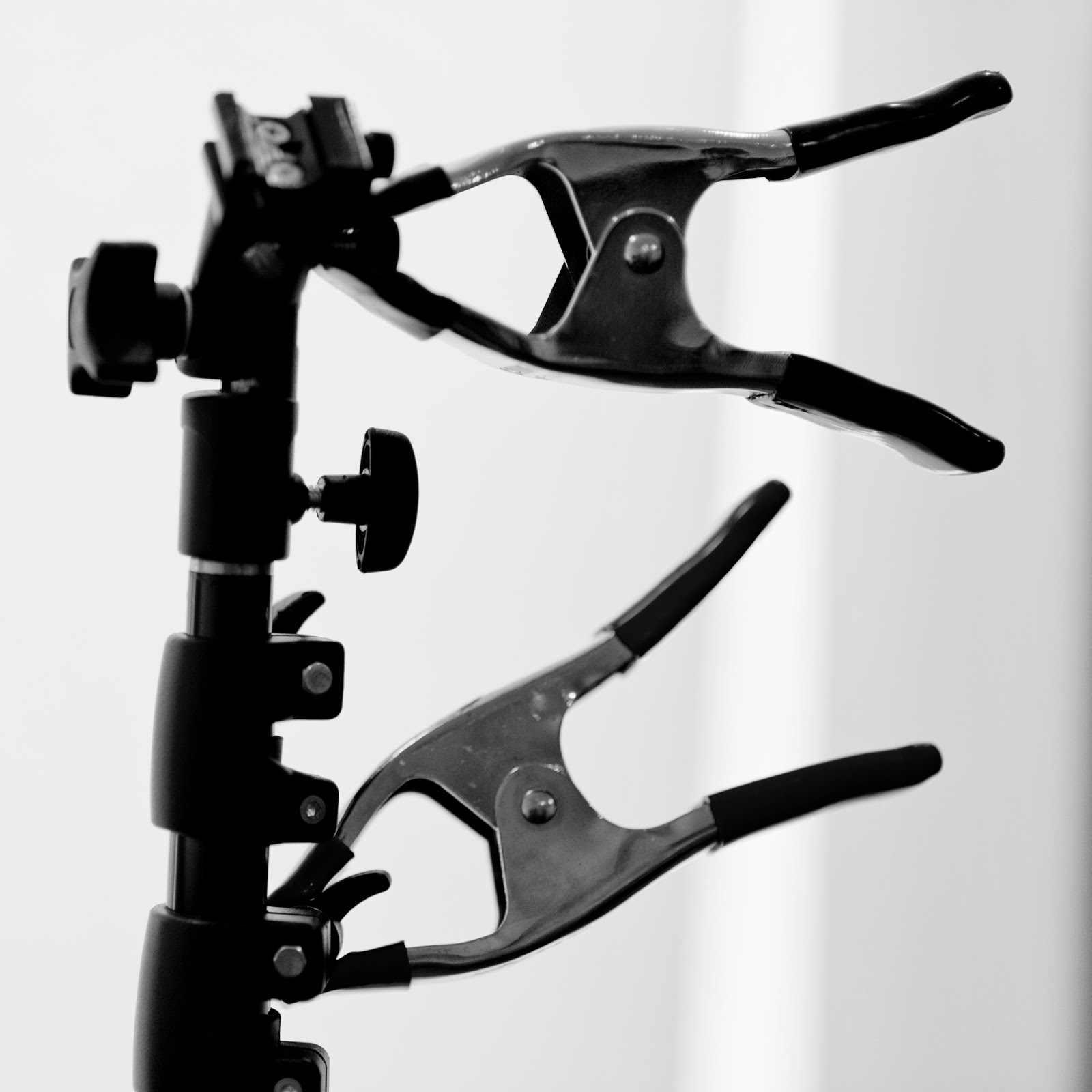 I own both the photog brand and Husky brand A-clamps. Guess what? And I'm not hating on any retailers but as photographers we are used to high dollar items. Pro brands (I'm not throwing anyone under the bus) know that and rightfully so, they charge a couple dollars more, per clamp, than these babies cost at The Home Depot. Industry brand about $5.00 each and Husky brand at The Depot are about $3.00 each. That's a huge markup my friends. I'm a huge believer in you get what you pay for but I promise you, these things are all the same.

As they come in different sizes, I'm a firm believer that the 2 inch model is the most versatile. Not so small that they are limited to their applications and not so big that they are a pain in the ass to pack. Oh, you won't want to buy just one. I pack about 6 of these on every shoot.

For what? In the studio they hold everything from seamless rolls to strobes with broken feet (oh, yeah baby, talk about improv). Without an assistant they work nicely to clamp reflector and reflector type mods to any light stands or C-stands. What do you think is holding that 5-in-1?

The bottom line? When you think you don't need them, you will. Use your imagination.

Shown :: Husky 2 inch A-clamp (the black clamp is of an industry brand and I will not reveal the source. 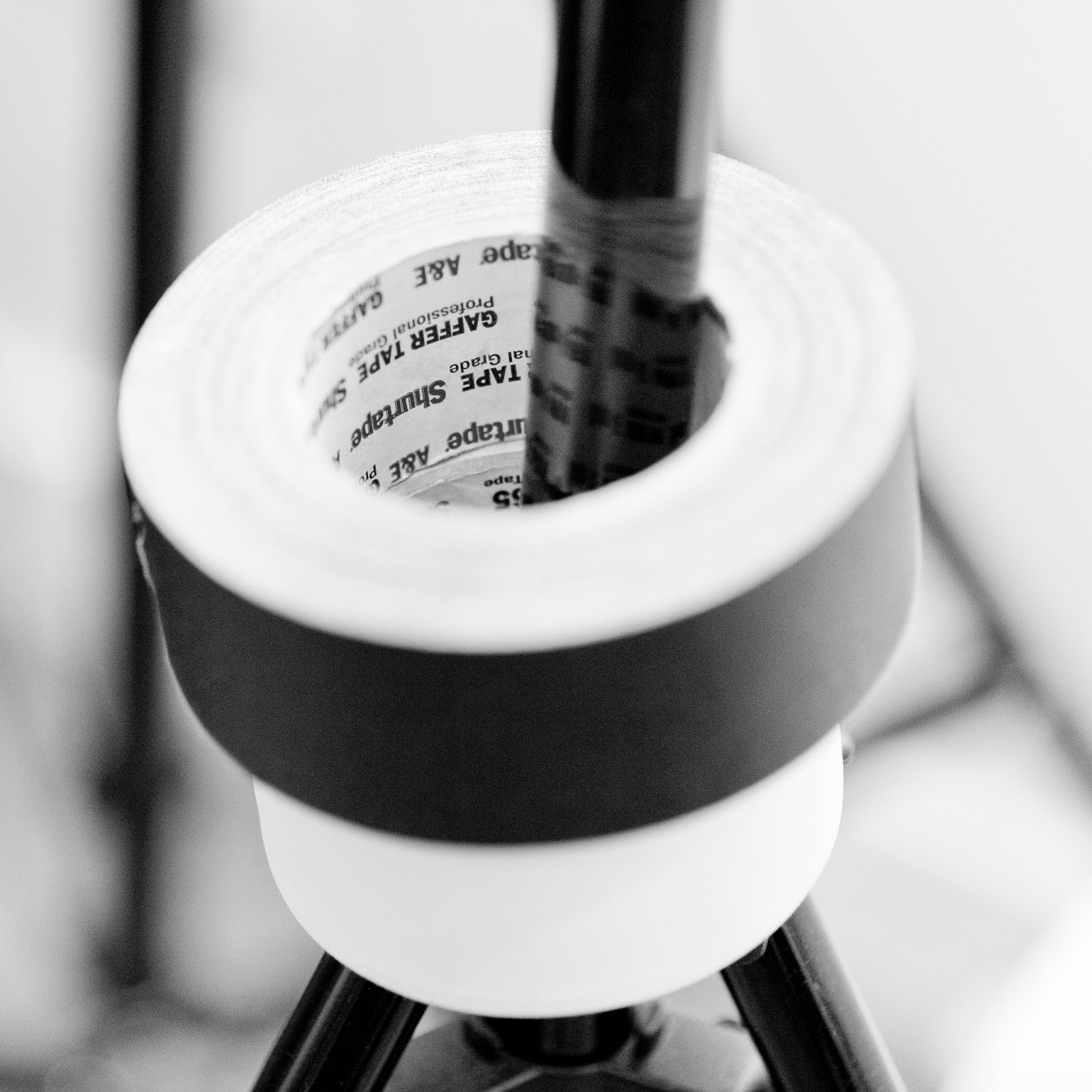 Gaf tape is probably one of the most universally agreed upon life saver in the photo/filmmaking industry.

Think of the extremely versatile A-clamp but only on a heaping helping of steroids.

You those people who fix everything in their house with some duct tape? Same principles apply here. From securing stingers (extension cords) to the ground to attaching gels to lights, gaf tape can do it all.

What's so extraordinary with gaffers tape is not only is it super strong but it's easily torn into custom sized strips and miraculously, it won't leave residue or peel paint from the walls.

Personally, I keep two rolls at all times, white and black. It just makes sense. I promise.

The downside to gaf tape? Slap me silly and call me Suzy, gaffer tape is NOT inexpensive in the grand scheme of the tape world. Sizes vary but on average you're looking at $20-30 per roll!!!

FOR TAPE. YES. TAPE. AND NO, IT DOES NOT (fill in your witty sexual obscenity here). 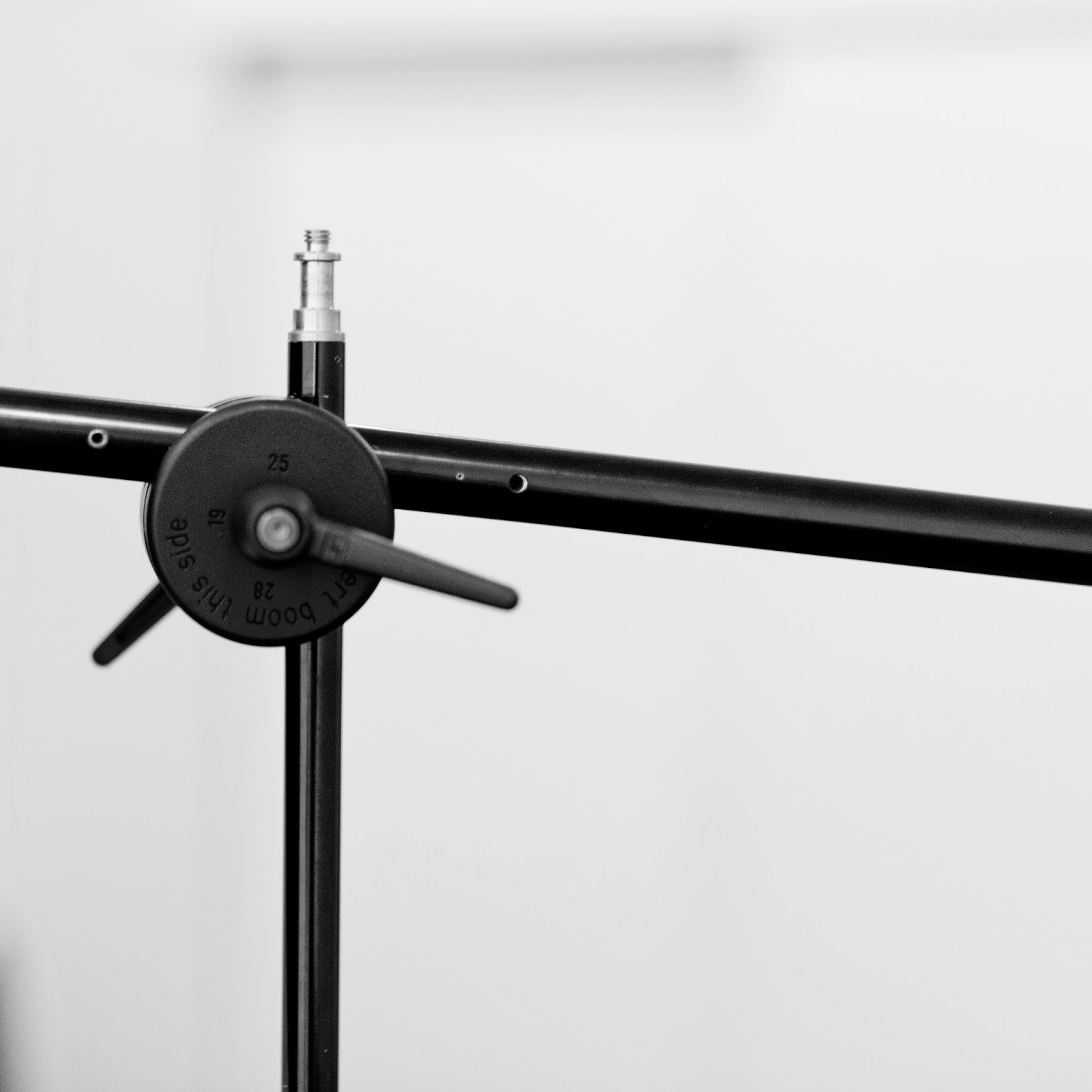 Strange choice? Not really. Not when you think about the potential of this seemingly simple tool.

The boom is a length of material traversing, horizontally, the vertical light stand or C-stand, attached by the "knuckle".

Booms come in various lengths or like the one shown here, adjustable in length with removable sections.

How did the boom make my list? The day came when I was lighting a model while wanting the light directly overhead. Hmmmm. With the light stand this could be accomplished with one minor issue. . .

Think about it. if a softbox is atop a vertical shaft, the lighting scenarios become a bit limited as that shaft WILL become an interference. It's just a matter of time. Look people, I shoot ambient and strobe but much of my work, environmental or studio, are are, more than not, lit. Being able to move the vertical about six feet, more or less, out of my face? That's a pretty awesome feat in and of itself if you ask me.

Show up to my studio and there is ALWAYS at least one boomed light in room.

More than that, you can hang reflectors from the boom (with your A-clamps of course), mics, mods, even a background if your in a jam.

Price point? For a decent boom, you're looking at about 100 bucks. You can easily find less expensive booms, shorter or less functional but as long as it can hold some weight, who gives a damn.

Calumet gear is scarce since their Chapter 11 in 2014. So sad as when it came to mods, booms and the like, Calumet brand never ever failed me. Solid stuff.

My list wasn't as cohesive as one may have expected. You know what I mean. The typical answers. I posted gaff tape so that would mean I should've posted scissors or some crap like that.

My friends. I like to keep it real in here. When I sat to contemplate the four things that I couldn't live without, this is what came to mind.

And I've seen some pretty crazy lists similar to this post. I mean there are some real MacGyver's out there. String? Come on homeys! If I need string, I'll find some damn rope or something. Not an item I'm going to set a reminder for.

Flashlights? Ok, I'll give those Ethan Hunts half credit. It's 2015. Most of us utilize our mobile device's flashlight if not the plain ole LCD screen if the app isn't available.

Disagree with my choices?

Let's get some convo going here, some debate. What are your photographic life savers?