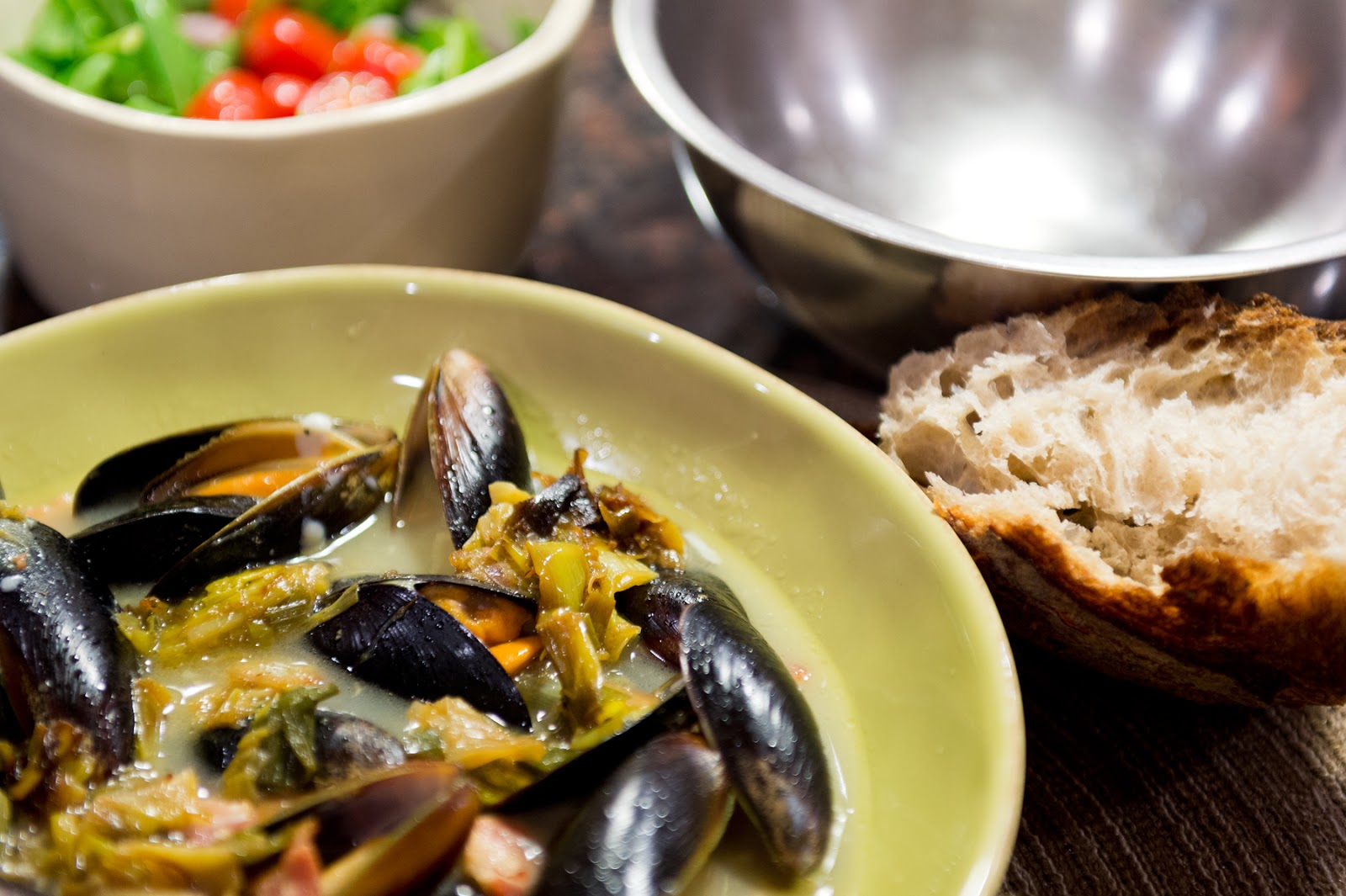 There must be a supernatural force pulling me to shoot this dish or its variations. Two years ago I shot  [these babies]. Admittedly, that shoot was one of my favorites in the food department as you can find it hung, big and bold, across the Food and Drink section at MICHAEL ANTHONY MURPHY :: PHOTOGRAPHER .

Today? Sure. Let's explore this little succulent seafaring shellfish :: Mussels in white . . .  and a whole lotta other delicious ingredients.

I'm gonna give you guys a round-a-bout of the exact elements used to create this mouth watering meal.


Hey, I'm the photographer, not the chef.

This was neither planned nor prepared for. It was dinner time in the Murphy household and the odor of awesomeness emanating throughout the house drew me to the kitchen, unconsciously grabbing Betsy (Nikon D4) along the way.

I quickly arranged the bowl of mussels with some more bowls and the bread. Why? The added elements can add HUGE interest to food photography. Placing the main dish by itself can sometimes make it feel a bit lonely. Sometimes.

In this shot I added the metal bowl for the shells, a arugula salad blurred in the back left and the healthy chunk of super delicious La Colombe bread.

[In hindsight, I'm totally not happy with my placement, rather positioning, of the bread.]

The mussels fell as they fell. Stefanie didn't know I was sneaking up with Betsy to create some cool photos, otherwise she would have made sure to have every mollusk pointed in the proper direction.

EH. There was no time for that. It was time to get the shot and get those savory shellfish in my stomach.

Look people. Sometimes the need to bring out the big guns (softboxes, C-stands, brollies, etc.) is lain in exchange for a pure and unadulterated strike of creativity.

When that creativity strikes, you need to attack that bastard as if your your life depends on it. Do you know why? Sometimes it will, depend on it, you life.

No strobes. No Wizards.

Standing between the mussels and myself was only a single weapon, My Betsy (Nikon D4).

The arrangement sat below a couple CFL bulbs. No modification whatsoever. Just two twisty thingies of glass dangling over the dishes. Nothing pretty here and further in post they are a white balance nightmare, at 2700K, if going for sterility rather than funkiness.

Each CFL is 13 watts. Equivalent to, shit, IDK. Point is you surely aren't getting a tan sitting under these bulbs. Bright they are not.

Shooting handheld, a slow shutter would not be the ticket to rad photography. In fact with my shaky over caffeinated claws, hand holding slow shutters will give me nothing less than a digital Jackson Pollock.

ISO and aperture are the answers with the heavy leaning towards the ISO.

Luckily, Betsy was already strapped with the Nikkor 24-70 2.8, my go to lens for food photography. Why? Closer focal distances than my primes. And at f/2.8, I could get nice shallow DOF. Sure, I could suck in more light at f/1.4 on the 50 but that's where Betsy's sensor saves the day.

I fear no ISO these days. Back when I was shooting the Canon 400d, I would cry at anything over 200. No joke. More noise than that chick and the horse in Tijuana. Too far? In my defense, I've never been to Mexico, only heard stories.

So how'd it look, the exposure?

Shutter :: 1/50 :: at 70mm I broke the cardinal rule that if hand holding keep shutter speed at or above the focal distance. Example, as I was at 70mm I should have been at 1/80 to optimize stabilization. I lucked out.

Not much. Just some tweaking of the WB. I didn't want to crush the blacks too much as the harsh light had things kind of crunchy already.

For a run and gun, sure. It works.

If I had planned it out what would I have done differently?

It was run and gun people! Lesson learned. Even on gigs that have big backing, you don't always have the luxury of time. It's taken me quite some time to be able to quickly come up with sexy compositions while pre visualizing and assessing my exposure triangle, all simultaneously while getting the shot.

And you know what?