the road to a maternity shoot 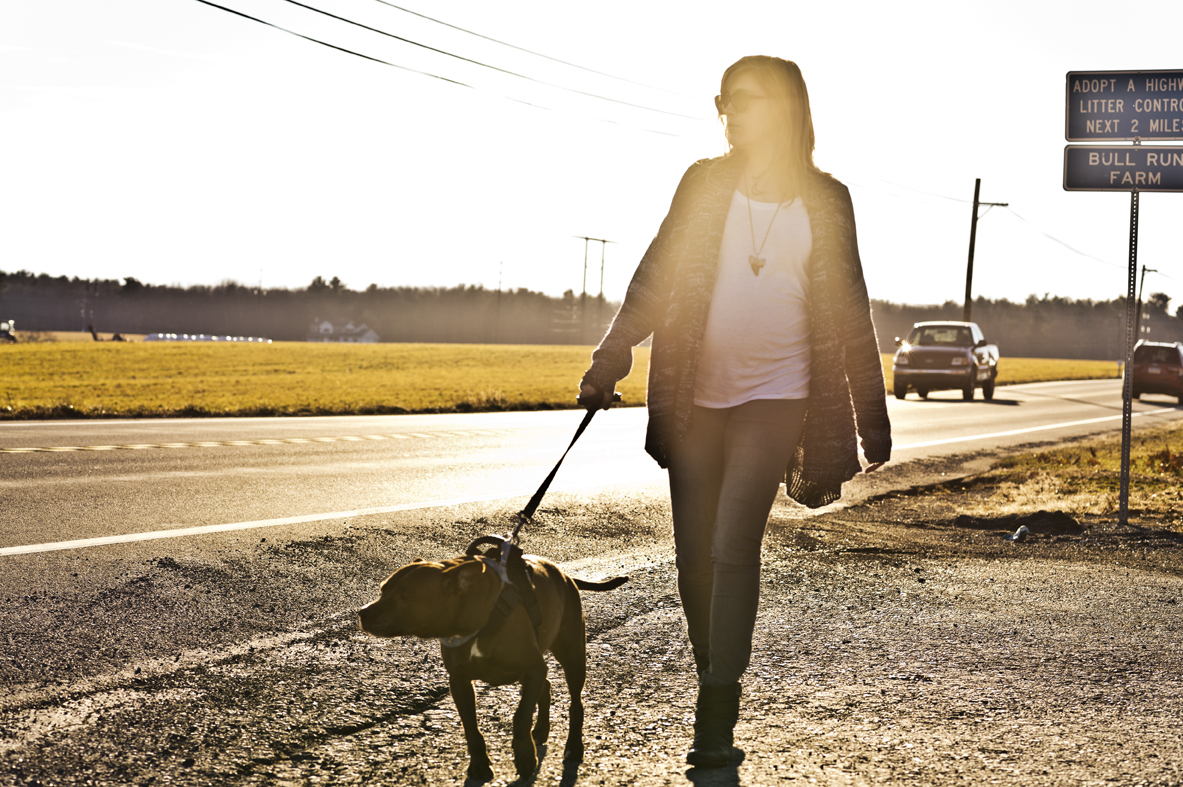 As photographers, there is an evolution of how we paint with light. . .

So you enrolled at the Art Institute of Philadelphia or were lucky to have been born a photographic phenomenon. Time comes when you have to make that big first camera purchase. Maybe not a pro body just yet but you bought a solid kit package; say a Canon EOS or Nikon kit with an 18-55 zoom.

At this point you've just learned the rule of thirds and other aspects of composition. Your comfort level with aperture, ISO and shutter speed, otherwise known as the exposure triangle are eh, so so.

A few months later you buy your first prime lens, maybe the super awesome Nikkor 50mm f/1.4G. Hooey! Your life as a photographer was just changed forever. Holy shit. This fast glass is magical, mystifying and mesmerizing. Not only can you finally get some decent shutter speeds at the weddings you are now shooting but smack me in the ass and call me Sally, look at that bodacious buttery bokeh. On that glorious day you vowed to be an ambient light shooter forever.

Your life and limits as a photographer? Changed. Liberated forever. As an addict (don't worry, we all are) you thirst for more and more information. TV has little meaning in your life now and if your aren't shooting, your are online, drinking up every bomb of image making knowledge you can find.

And then you come across this Strobist guy. Uh oh. Flash? Strobes? Inverse Square Law? Pocketwizard? eTTL? iTTL? This shit was all foreign and now your entire life was just flipped upside down. What was this counter culture? Why weren't you invited?

Strobist. The mecca for learning how to light. How to light off camera that is. I mean any dope could pop an on board flash and call it a day. Oh no my friend. The Strobist bible is that of OCF (off camera flash). You thought you mastered your exposure triangle? Think again. The f-stop just got rebranded. You don't know a Goddamn thing.

First, you are overwhelmed with fear because honestly, Physics wasn't all that fun in college and you were lucky to get a C-. And now you are about WILLINGLY dive in head first to a world of waves and particles that are light. To fight this feeling and become a purist of ambient or to explore this new horizon?

You man up and take the plunge.

Not only has The Strobist, David Hobby, become just as important to you as your spouse, but you actually enjoy the physics of light. What happened? You have slowly evolved into what the world calls a geek. Or a nerd. Take your pick but there's no denying it. Your gangster card has just been revoked. Welcome to the club.

As you love the light your wallet takes a major hit as a DSLR and a 50mm don't nearly cut the life of a Strobist. Not only do you NEED a bag o strobes but you also MUST HAVE every modifier you feast your eyes on. At first it's a few umbrellas. No worries. Pretty affordable. Ah, but what to throw those on? Light stands. swivels and spigots. Next you discover softboxes and beauty dishes. Shit's getting pricey. As your spouse throws out ultimatums such as it's me or your Wizards, you rationalize by stating these are permanent investments. They bought your bullshit, even if just for a few months.

Now, you sneer those of the ambient purist camp. Nothing gets in front of your glass without getting blasted with your arsenal of strobes. Nothing. It could be 1/5000 at f/45.0 out there and you'd still be lighting it.

A couple of years pass. The sun has become your enemy. Sunny day? Horrific. Like a vampire you thrive on the darkness for this is where you find light. Everywhere you go and everything you do, you analyze and engineer to figure out how and where you would place the strobes that are likely in the trunk because, well, you just never know.

You laugh but know it to be true. How do I know? I was there. I too followed this familiar path.

But somewhere along the way. I don't know when it was. I came to make peace with the sun. Don't get me wrong. I still flash as if those bursts of light are my Samurai swords but no longer do I pledge allegiance to one or the other; ambient purist or Strobist. I feel we all can and should live happily under one roof.

The ultimate goal should be awesome image making, no matter what the means to the end may be.

Which finally brings us to why we are here today. WTF, I sure have a lot of trouble keeping my posts short and sweet. Sorry. Can't help it. I just have so much knowledge to share with you, my homeys.

As you may or may not know, nothing about me is subtle. Like my personality, my work is big and bold. Nothing premeditated. My style just happened to mature into that of my personality.

Having said that, when I'm strobing, it's typically pretty noticeable and conversely, when I'm working the big strobe in the sky, lately, I've been working it head on.

Remember those days of young when you saw diagrams of composing a shot outdoors? Subject in front of you and sun behind you. That was gospel. Never ever ever shoot into the sun! Should you break this commandment and you will be damned to hell for eternity.

Well, that's exactly what I did on this day. Somewhere between Allentown and Scranton PA lies the rural town of Kregsville. It was on Route 209, Interchange Rd., along a stretch of farmland near the world's largest general store, Country Junction, that Stefanie, Bruno, Harper (in utero) and I found ourselves on the perfect ground for an awesome photo shoot.

Maybe it's the fact that I've been living in Philadelphia for most of my life but I find the open roads like this to be the greatest shoot locations.

I'm used to buildings, graffiti, cabs and all of the cliches of big cities. Don't get me wrong, I still love working in the city but the sheer size of these vast farmlands often takes my breath away. Every bend of the roads bring, IMHO, a new and magnificent location for a shoot.

So we pulled off to gravel lined parking lot, on the westbound side of the road. Looked like an eatery but on this day, they were closed.

Stefanie took Bruno for a poop as I geared up. As I may have fooled you with the white balance, the weather was much colder than portrayed in the photograph. Ah, the powers of the Kelvin scale. At 6500 degrees you get a nice feel of a sunny, early fall day when in fact this day was somewhere around 35 degrees Fahrenheit. Not to confuse you with the two very different temperature scales.

I digress. Shocker, I know.

The time? Late afternoon. Taking a look at the metadata, I think I didn't set for the winter change of clocks. Or maybe it was 4 p.m. I can't remember. Regardless, 3 or 4 p.m. the sun was hanging somewhat low in the sky with only a couple of hours until sunset. No, not Golden Hour just yet.

By default, I shot her as the old textbooks would bang into your brain. Subject in front/Sunlight in the rear. Gag me. It looked way to blue sky and happy. Ugh. Not my style. Besides, the shadows cast on her nose were pretty hard and Bruno? He totally didn't take to my direction. He was squinting as the sun blasted his face.

What did I do?

I directed Stefanie, Bruno and In Utero Harper Thomas to walk towards me with the sun behind them and me? Shooting straight into the fiery inferno.

The histogram was firing off three alarm clippings. Highlights blown to the Mesosphere. The subjects?

Oh. I'm sure you gear heads and pixel peepers are dying to know with what and how I nailed it. Fellow nerds and geeks, join me ::

Um. THAT'S IT!!! Jeez. Go compare to some of my other Nerd Files. Sometimes upwards of about 30 items.

Of course I had some other glass packed but all that was needed was simply one camera and one lens. Ok, I probably had a flash or two packed with a couple of Wizards. But in the end it was pure and simple.

Exposure? Oh boy. I may catch some heat by the peepers here ::

Why on earth would I shoot at 500 on such a sunny day? Well, first of all, I have zero worries working at higher ISOs on the Nikon D4. I've shot deliverable files upwards of ISO 10,000. 500? Puuhhleeze..

I really wanted a fairly fast shutter since I didn't have the strobes to freeze motion. At 1/1000 I could freeze my subjects while they were walking along Interstate Rd.

f/6.3? I wanted a wide DOF (Depth of Field), getting focus on Bruno, the woman and woman to be as well as the signage in the background. BULL RUN FARM. Awesome element for this shot.

Ok. That has got to be a wrap. Yes? Shit man. And I still haven't thought of a title for this post. Well, by now you are seeing a title but as I'm typing this sentence I'm trying to think of a way to incorporate  the fashion maternity photoshoot with my other rants. Here goes nothin'.

Ok. I'm sure you've noticed, by now, today's allusions to the bible. Just fun. No worries. No religion. No politics. NOT HERE. That's a real quick way to lose 50% of your readers. We be totally neutral here. Vote for and pray for whomever you like. Everyone is welcome unless you shoot Pentax. Ha. Kidding. You get love too.