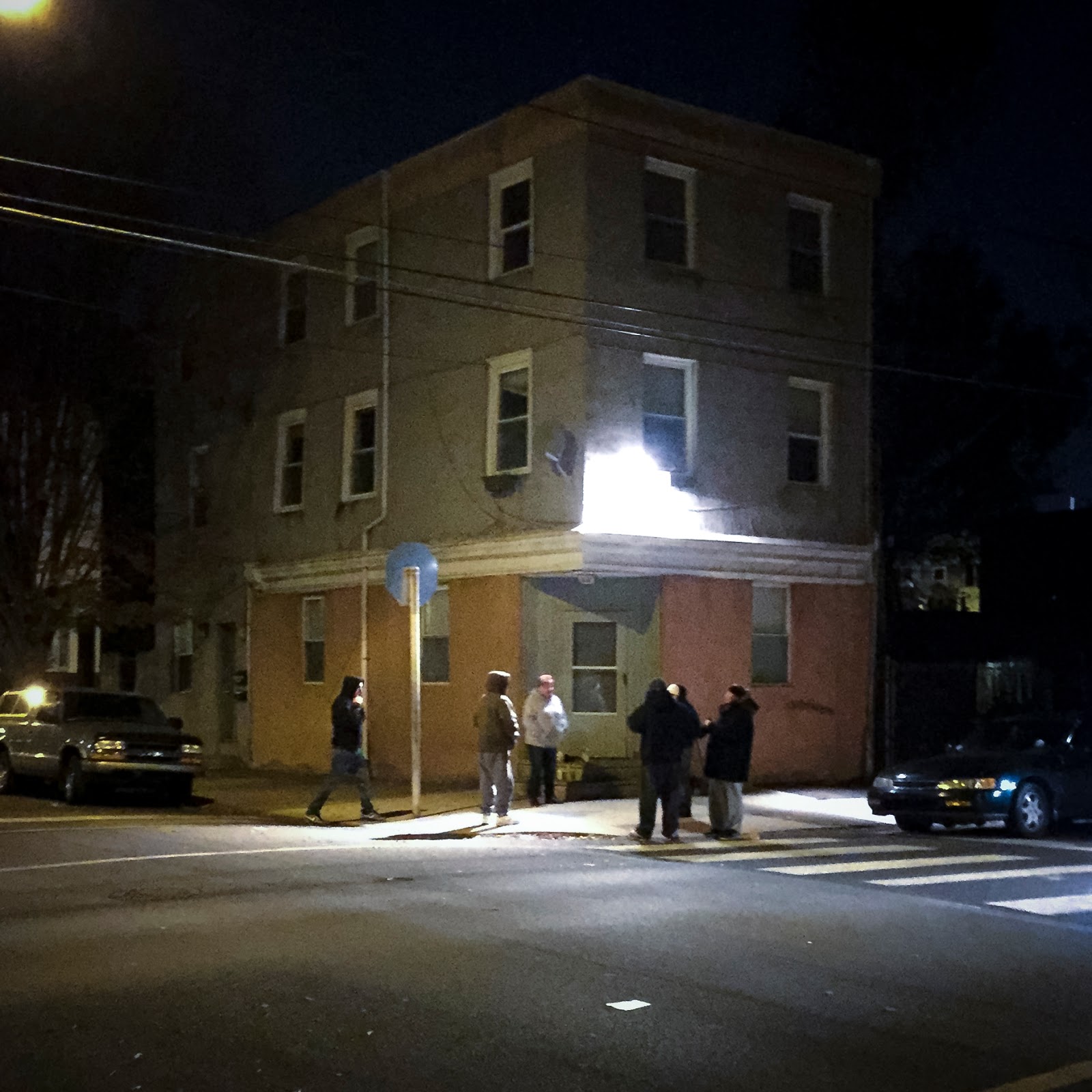 It took a lot of chutzpah to post this particular photograph especially since the recent slam on a much older post. Lemme explain...

Wasn't long ago. A chilly evening just about a week before Thanksgiving.

I was walking Bruno for his last, shall we say, evacuation of the night. I was wearing my pinstriped pajama pants, a clashing plaid flannel shirt, my favorite moccasins and my Kenneth Cole pea coat. Looking cool I was not. Looking tough? Ha. I would have wanted to kick my own ass on these streets.

Passing this familiar corner on a regular basis, I was drawn to pull out the iPhone to capture and share with you not only this snapshot but the inward emotion that is evoked.

As they say, a picture is worth a thousand words. I didn't have the street overtaken with strobes or have the illegally parked Xterra on the sidewalk while being unloaded of bag after bag of gear. Simple; Bruno was peeing on a fence and I pulled the iPhone 6 Plus from my pinstriped pajama pants pocket. Click.

But my friends, my 1000 words, well, they may piss you off. Don't like it? Go waste some more of your precious time watching NCIS.

November 21st and it's about 10 p.m. Marie, having been out of work since June, stands patiently on the corner, hands buried deep in her gray hoodie and freshly cashed unemployment check guarded ferociously in her dark jeans. She's been on the corner since 7p.m. She's been on the corner since she was 7 years old. Ambitions of greatness lost in the sewer. Now, 30 some years later her ambition is laser focused, to get her next Oxy fix. "Where the fuck is he?!"

Snooky, limps up to say hi to his old friend Marie. He's sporting a brown Carhartt and sneaks he scored from the back of a truck. It's Friday and he just wrapped up his weekly AA meeting. His voice is low and raspy as he bitches about the rapidly approaching winter. With the 9mm slug still lodged in his femur, Snooky limps closer to Marie as he begs her for just one Newport, offering her the change in his pocket. Marie, without a pill since lunchtime, is getting a bit edgy but she shares a smoke with her friend.

Helping Snooky with lighting his cigarette, they notice Tiffany, Stevey and brother Billy awkwardly walking towards the corner. Each of them sporting tallboys of Keystone Light. Tiffany drunkenly crying about her sister who just got locked up for a parole violation. The brothers ignore her as they are overly excited about the tickets they landed for Sunday's big game.

Marie is starting to freak out as she thinks to herself, "He should be here by now." Her skin has goosebumps and regardless of the temperature, he face glistens with moisture.

Seeming to be a lifetime, her man sneaks up behind her with the standard black hoodie and the French Palmed baggie ready for trade off. Before thanking her man for yet another score, she tears open the mini Ziplock bag with surgical precision and quickly chews two of the bitter pills until they dissolve into her salivating mouth. She grabs a tallboy from Tiffany to wash down every milligram of the tablet.

An air of relief washes over the crew as Marie gets her fix and the team is now unified. Power in numbers.

Look people, I'm not being stereotypical here. I walk by this group on a daily basis. I listen to their conversations and more than anything, I'm angered.

The mentality is a synergistic result of self loathing and misery.

I'm not here sitting on a high horse saying that I'm better than they are. Hell no.

Anytown U.S.A. On any street corner and in any bar. Woe is me woe is you. Woe is he and woe is her.

FUCK YOUR WOES. Get the fuck up and go do something about it. The magic answer is not found with your surrounding miserable people. You are all just sucking the life from each other, pulling one down lower than the next. A vicious cycle. You can only help yourself.

I walk Bruno nearby and listen closer and the negativity boggles my mind. They hate on all walks of life; blacks, Hispanics and even me walking in my pinstriped pajamas. Yes. I've heard them make fun of me and my goofy outfits.

And you know what? I chuckle to myself because I once was a similar douche. Now? I listen and let that fuel my own fire. Hell. I know they would never let me fuel theirs.

So while they hate the world for the hand they were dealt, I walk home, throw away the baggie of Bruno's poop, hang his leash, take my coat off, sit in my office/studio, open my laptop and most importantly, DEAL MY OWN FUCKING CARDS!