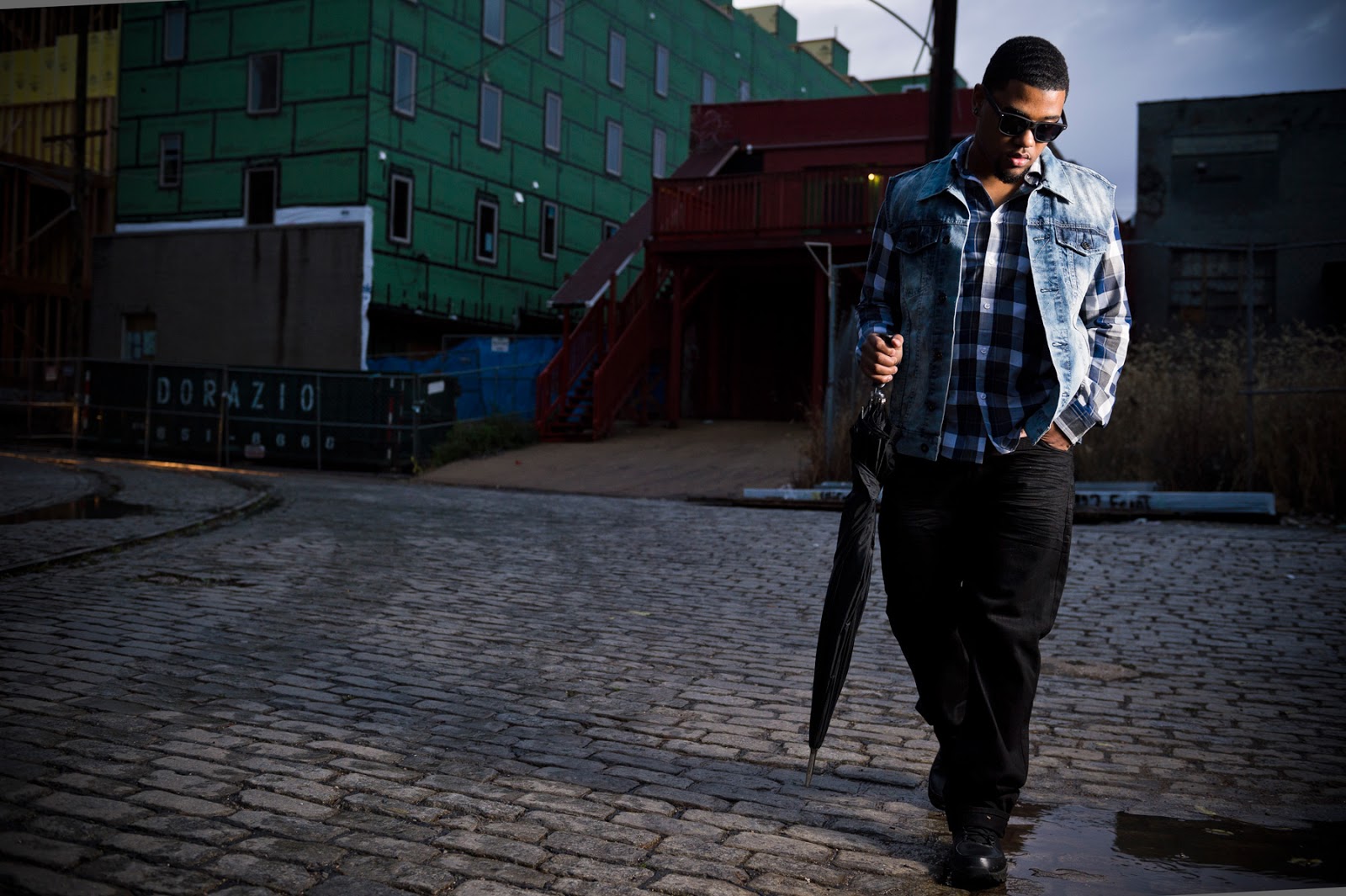 Many a post, I've mentioned the fact that my photographs aren't typically born out of a miracle. I don't put lotion on my right index finger and gently massage it, so that it melds perfectly to my camera's shutter.

Today, I'd like to elaborate that although some of my photos may be pretty or cool, the road to their successes aren't quite as glamorous.
K-Jonex 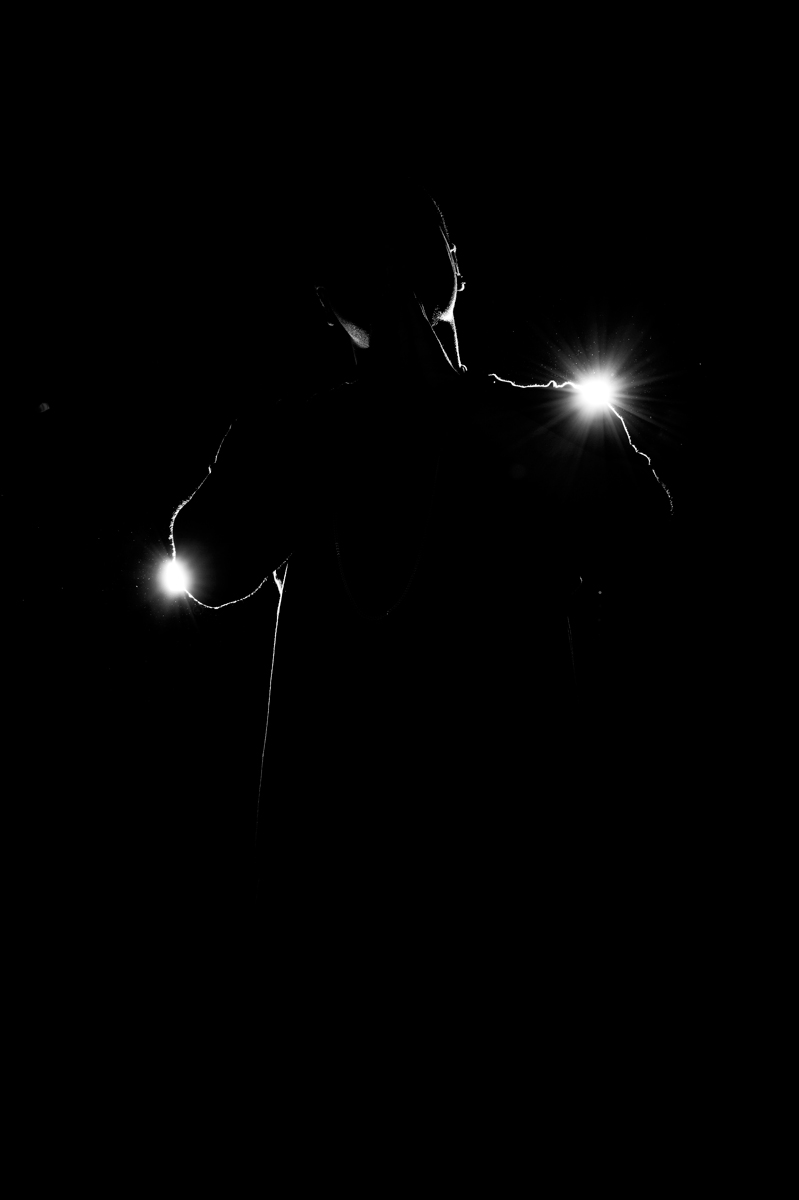 Before we get into the nitty gritty, the real nerd dirt, the gear talk, the f-stops, the White Balance and all that juiciness, I want to introduce today's artist and my newest friend, K-Jonex.

K-Jones grew up on the rough streets of Camden New Jersey.

It was in Camden that Jonex began to rap. Without having an entire grasp on his passion and the direction he wanted to take it, Jonex started his creation with word play, not paying much attention to context or content.

It wasn't long that K-Jonex developed a more polished style and soon began to battle other seasoned rappers on the mean streets of Camden.

Contrary to what you may be thinking, the battles were non-violent. Hell no, awesomely, the battles took place between two street rappers, round by round, throwing rhymes rather than right hooks, until one wordsmith exits the venue crowned the winner.

Jonex began battling on the back of the school buses where he first gained popularity. It was around that time when he realized this was more than just street rapping but a form of artistry that he had a passion for.

Only a few years later, Jonex began to fine tune his creative skills. Once rapping from place of inner anger, Jonex matured into a raconteur of rap, creatively telling stories of his journey from the back of the school bus, to the streets and soon enough, to your iTunes library.

Jonex and I hit it off immediately. From afar one would think that we were worlds apart but in fact he and I were very much operating on the same inspired creative wavelength. Like myself, K-Jonex is an artist and is working on sharing his stories to the world, on rhyme at a time.

I couldn't wait to get shooting as the vibe from our conversation had exponentially grown to an unmeasurable level. 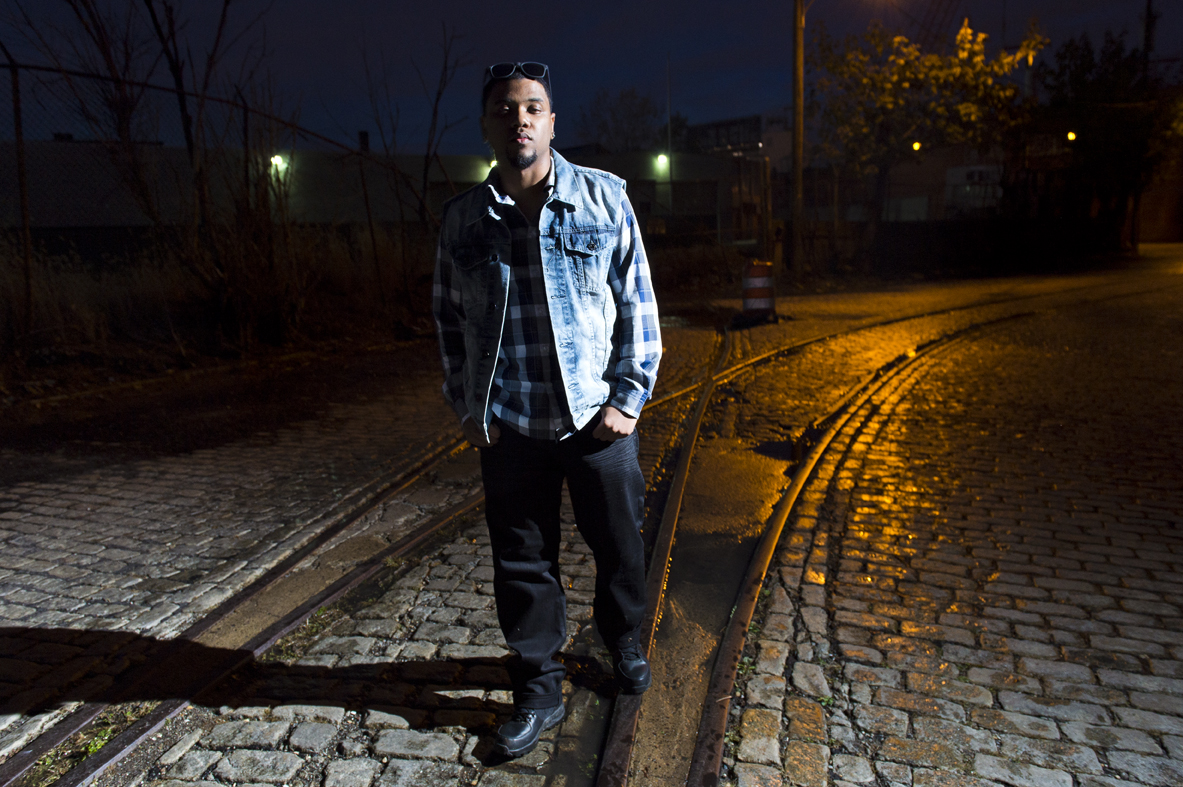 Jonex and I started things off in the studio. Wanted to get some extreme close-ups and some experimental silhouettes (2nd photo herein). I was in the mood for Jack Whites The Dead Weather band and Jonex was in the mood for some old school rap. Hmmm. We compromised and threw on the awesome sounds from spin master Paul Oakenfold.

There was a groove that we both had to find and from that work in unison. We shot for about an hour or so. The energy was high as was the volume. RAW files were being cranked out, pose by pose.

It was time to hit the street scenes. Not wanting to lose momentum, we wrapped up in the studio rather quickly.

It was cold and windy outside, in the low 40s. Bone numbing rain had been falling all day but it wouldn't stop the ideas spinning in my head. In fact, the creativity was only increased by the wet weather.

I packed relatively light; no bags, Betsy (Nikon D4), a few Wizards, two strobes, one stand and the Westcott Apollo. No brollies, no clamps, no tripods, no reflectors. Bare bones people.

I jumped in the Xterra and K-Jonex followed closely behind as we headed down Delaware Avenue from Frankford towards Canal Street. Yes, Philly has a Canal Street but unlike the one in NYC, the Philly version stretches only a few hundred feet. With no outlet, cobblestone streets and some old factory buildings, I thought this would be a perfect place to shoot.

Upon arrival I threw on my beanie and pea coat. Damn, it was cold.

First shoot to attack was that of K-Jonex smoking in the car.

The Proverbial Shit Hits The Fan 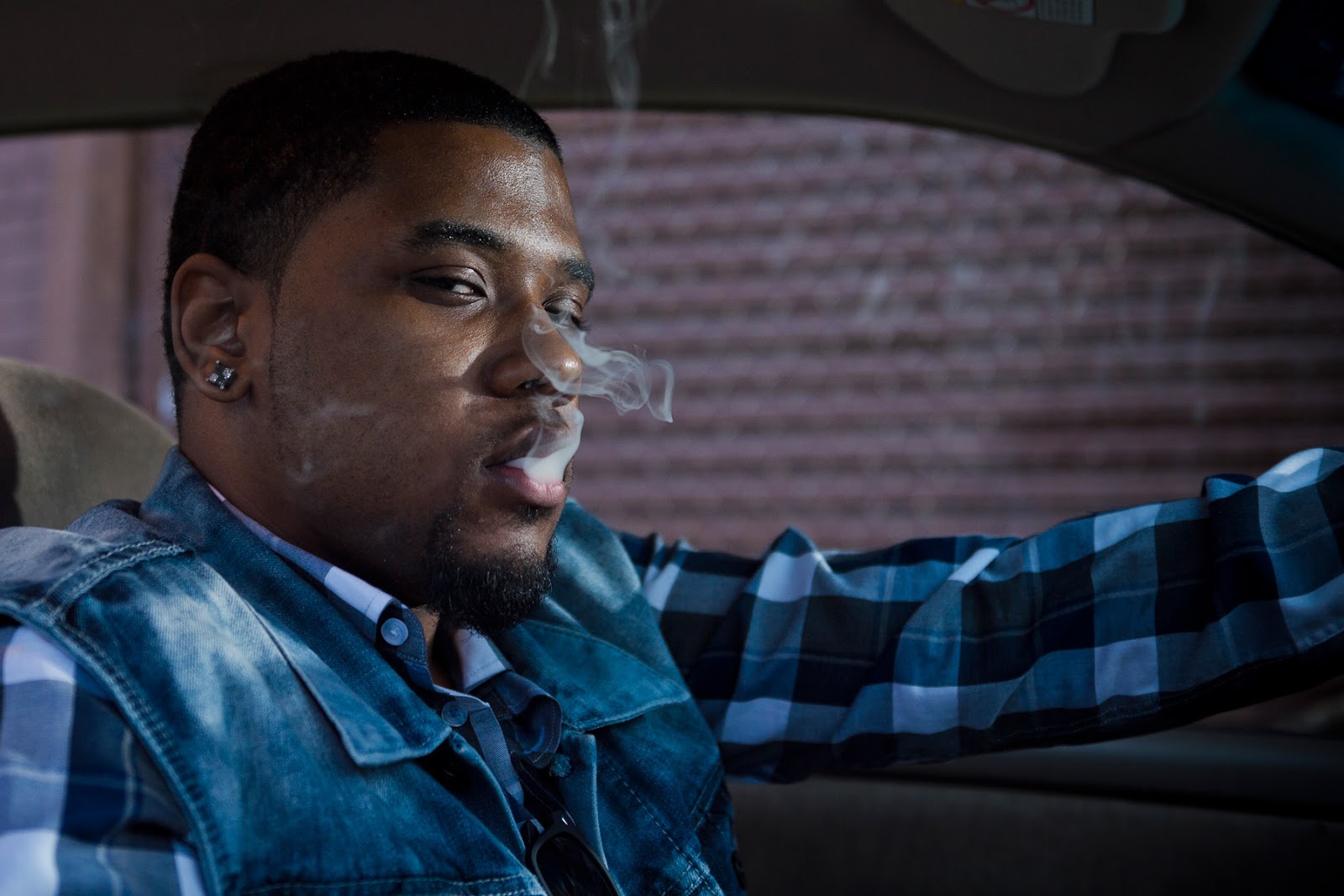 The shot, pictured above, was nearly what my mind's eye was seeing. . . nearly.

The plan was to shoot him just as the smoke began to escape his mouth, as thick as can be, not blowing but letting it leak out and up his face. Lighting was to consist of a 285HV firing into the Apollo which would blast a nice large and soft light source through the front windshield.

While setting up the lights, I noticed the wind was pretty intense. I hung my bag-o-weights from the light stand but decided to run over to the Xterra to grab some more poundage.

Reaching into the cargo section of the truck, I heard some ruckus with Ks perturbed voice immediately following.

Time immediately went into slow motion and I knew exactly, without looking, what had happened.

Like a lifeless road carcass, so was my lighting rig. Limp, the setup lied on the cobblestone. I ran to help but I already could foresee the outcome. My attempts at resuscitation were futile.
Vivitar's foot was gone and Apollo's bones shattered.

Every attempt at saving them just left my loves lying restless in my arms.

Hold Yourself Together Man!!!

Think, think, think. Ok, so I simply would work with the spare strobe I packed and I'd have to work bare. I had an Omni in my back pocket and even though I knew better, threw it on the flash in hopes it would diffuse the light a bit. Again, I knew better. All the Omni is good for is sucking up your f-stops.

It was hard light or the quickly diminishing ambient. Had to work fast.

After a few shots with the bare strobe we both took a look at the images. Let's just say we both thought the hard light wasn't agreeing with his skin.

Think Murphy think. Drive back and grab another mod? Work the ambient for the mere minutes we had left of daylight?

I took a step back to reevaluate the situation. fell by my hip as I dropped my head in a state of mental exhaustion.

About to make the decision to shoot the rest of the day with available light, I noticed a work van parked about 30 yards away.

People, I saw a giant softbox. I ran over to the truck, threw the bare strobe and aimed it directly at the side of the van.

It's how we nailed the opener and this shot :: 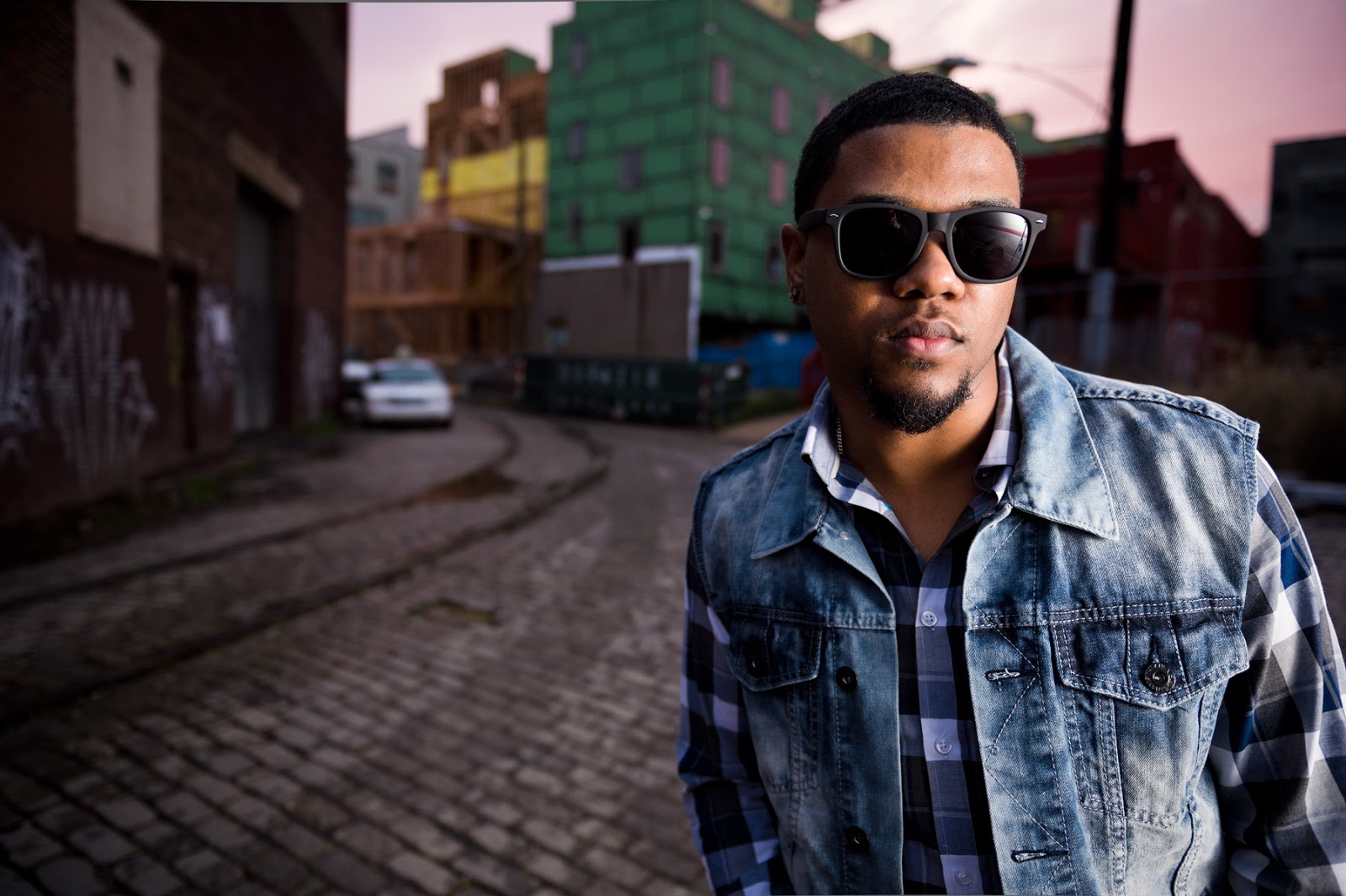 Don't believe it? Feel free to zoom into his sunglasses. Ah, that's a stripe on the van as well as the hint of a wheel well. Pretty cool huh?

Sure, our mobile versatility was limited a bit but damn did this trick work, and it freaking worked BIG TIME!!! In fact, I liked it so much that I may have to consider trading in the Xterra for a plain white work van. Great for windy days. No sandbags needed. Not sure how the wife would dig the van but she may adjust. Hah. Not a chance in hell.

Moral Of The Story

Look homeboys and homegirls, when shit gets real, you better bring your balls to the table and step your game up to a new level.

Did I want to curl up into a ball and die a horrible death when I saw my gear lying lifeless on the ground, mangled to the point of no return? You bet your ass I did.

In fact, my mind was racing at ludicrous speed.

This wasn't a shoot for your mommy's birthday card people! Welcome to the terror dome, you know what I'm saying? Of course you don't. I've been typing for too long now and my thoughts are drifting.

What I'm trying to say is that if you want to fight in the octagon, when your ass gets knocked down you better get up quick or you'll be toast. Likewise, if you are shooting in the big leagues and you have a gear problem, you CANNOT go crying to the client about your misfortunes. Hell no. You gotta move forward, seamlessly. 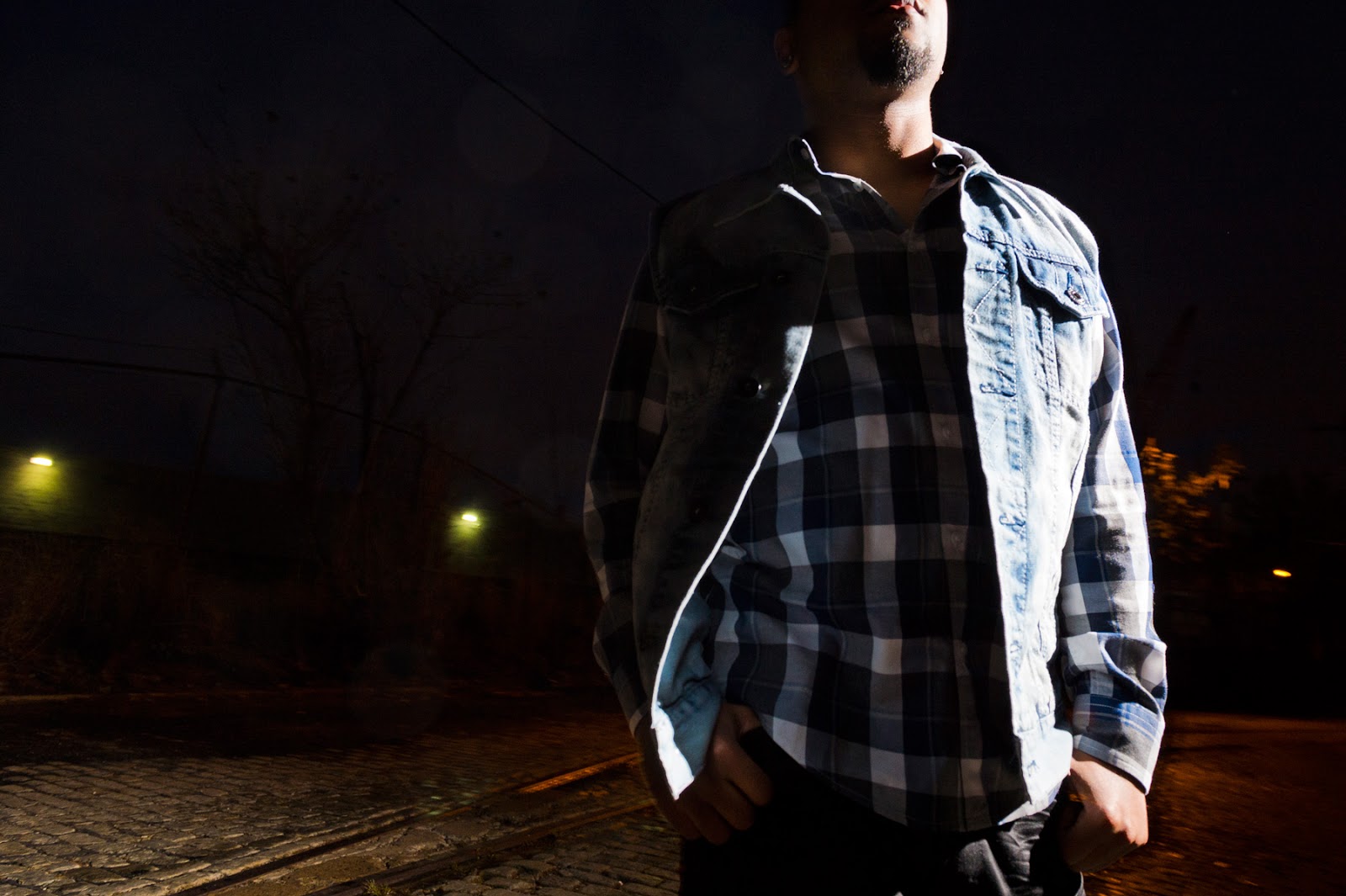 Hey peeps, be sure to follow the K-Jonex Twitter feed [here] to stay up to date with the projects that he currently has put into action.