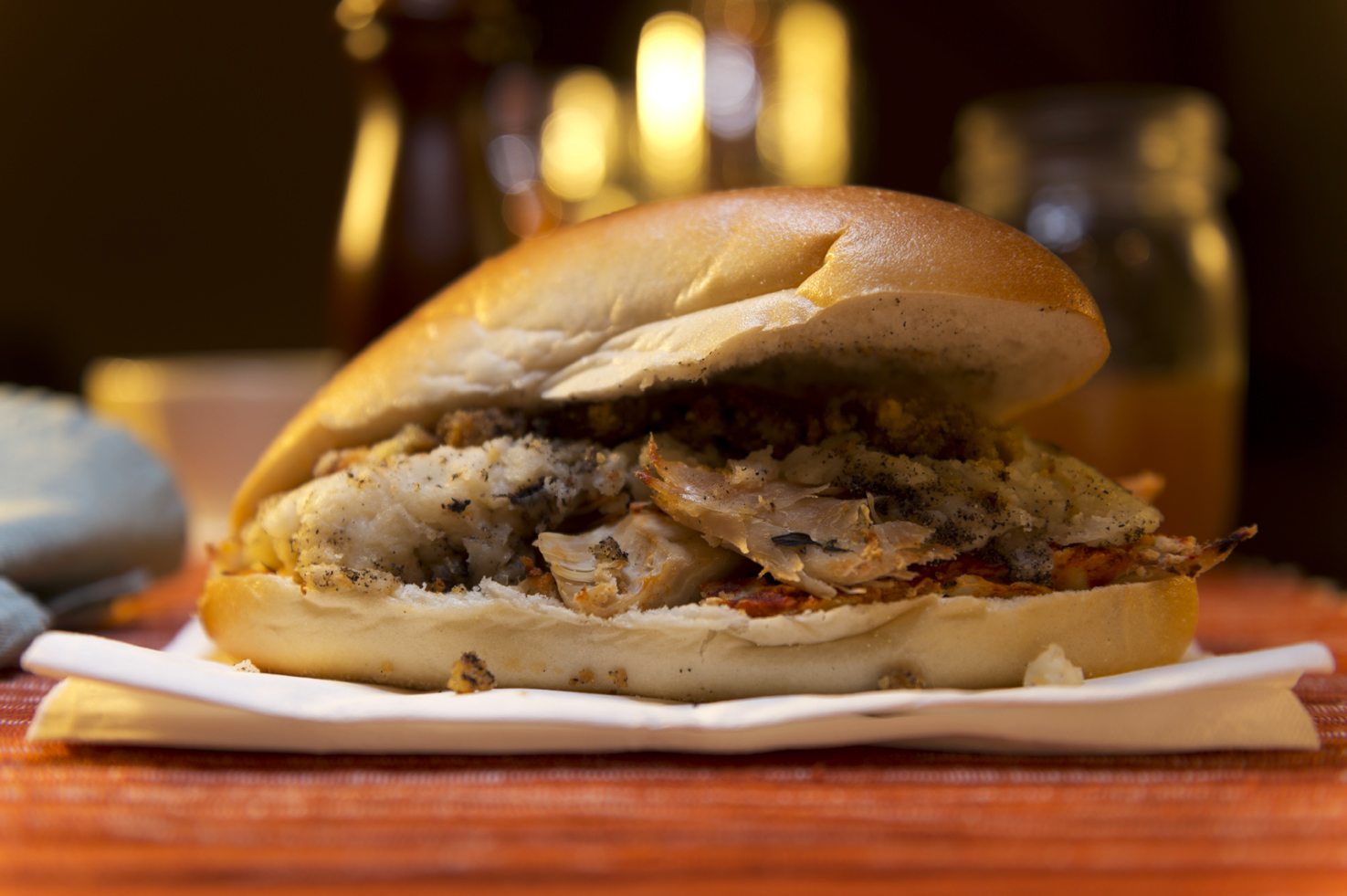 I was about to pathetically begin this post with the horribly trite and cliche commentary about it being that time of year already.

Way to point out the obvious champ.

Not here. Not today. I'm sure I've committed that crime in the years prior.
Before I proceed to or after I finish the here and now, be sure to check out years [ONE], [TWO] and [THREE].

Just one of my many opportunities to share a plethora of random thoughts running through my brain, mostly regarding the holidays that are upon us. Oh, sure, we shall certainly discuss the photograph and the deliciousness residing within.

Without Further Ado . . . The Rant

As you may or may not be aware, I'm not exactly a big fan of tradition, conformity, normalcy or following directions for that matter; rules, fuck 'em.

In fact, ask my wife. Stefanie will be the first to tell you how stubborn I am, in a good way. I like to color outside of the lines per say.

This brings me to my gripe. Thanksgiving. Turkey. WTF?!

I know historians have a few theories as to why we traditionally eat this bird on Thanksgiving but guess what people? Really? Turkey? Does this meat really launch your taste buds into a state of euphoria? I doubt it. Seriously. You can add all the tricks of the trade and guess what? It's still just turkey. Deep fried and stuffed with chicken and duck and it's still just turkey.

Kind of a boring bird if you ask me. Such a big day of celebration, gluttony and thanks and we eat the most bland beast of the bunch. Yes, I love to alliterate.

Duck? I'll take it. Beef? Um, yes. Hell, why even go that route? How about some tofu and soba noodles drenched in a pungent fish sauce. Yummers. Sushi for Thanksgiving anyone? A big giant spread of raw fish and nori. Heaven.

I'll even take it back to somewhat normal. How about some bangin' homemade burgers? Never had I eaten a bad burger. Ok, I'm lying. Those bullshit homemade welfare burgers are the epitome of horseshit. The toppings go on the burgers people, not in them!!!

Seems we are all doomed, for a long long time, to dried turkey, lumpy mashed potatoes, burnt biscuits and some crazy sweet potato pie that your aunt brings along and for some freaky reason, has onions in it.

Non-conformity is the school I subscribe to but you know what? Like you my friends, I also choked down that same turkey this year.

And the funny thing? I'll probably be eating the same bird in less than a month, on Christmas. Jeez. Every see Groundhog Day? Exactly.

Until My Great Revolution . . .

While sitting, loading gravy onto my potatoes and dreaming of my next bowl of Vietnamese Pho, I began to plan this Thanksgiving Leftovers shoot.

Oddly enough, as the thought of turkey bores the shit out of me, I look forward to my own culinary creativity on the eve to follow the day of thanks.

Whilst people stand in long cold lines to fight over the latest and greatest time suck for their children, I planned both my leftover meal and a way to attack this year's photograph enjoying the warmth of my home and a hot cup of coffee.

Last rant. I swear. Did those people forget about that little invention called the internet? Example. The world stood in lines for the iPhone 6 release. You know what I did on that very same day? clicked a few buttons and presto, from the chair and comfort of my office was able to get that exact same product. Crazy town.

And so I planned the shoot. 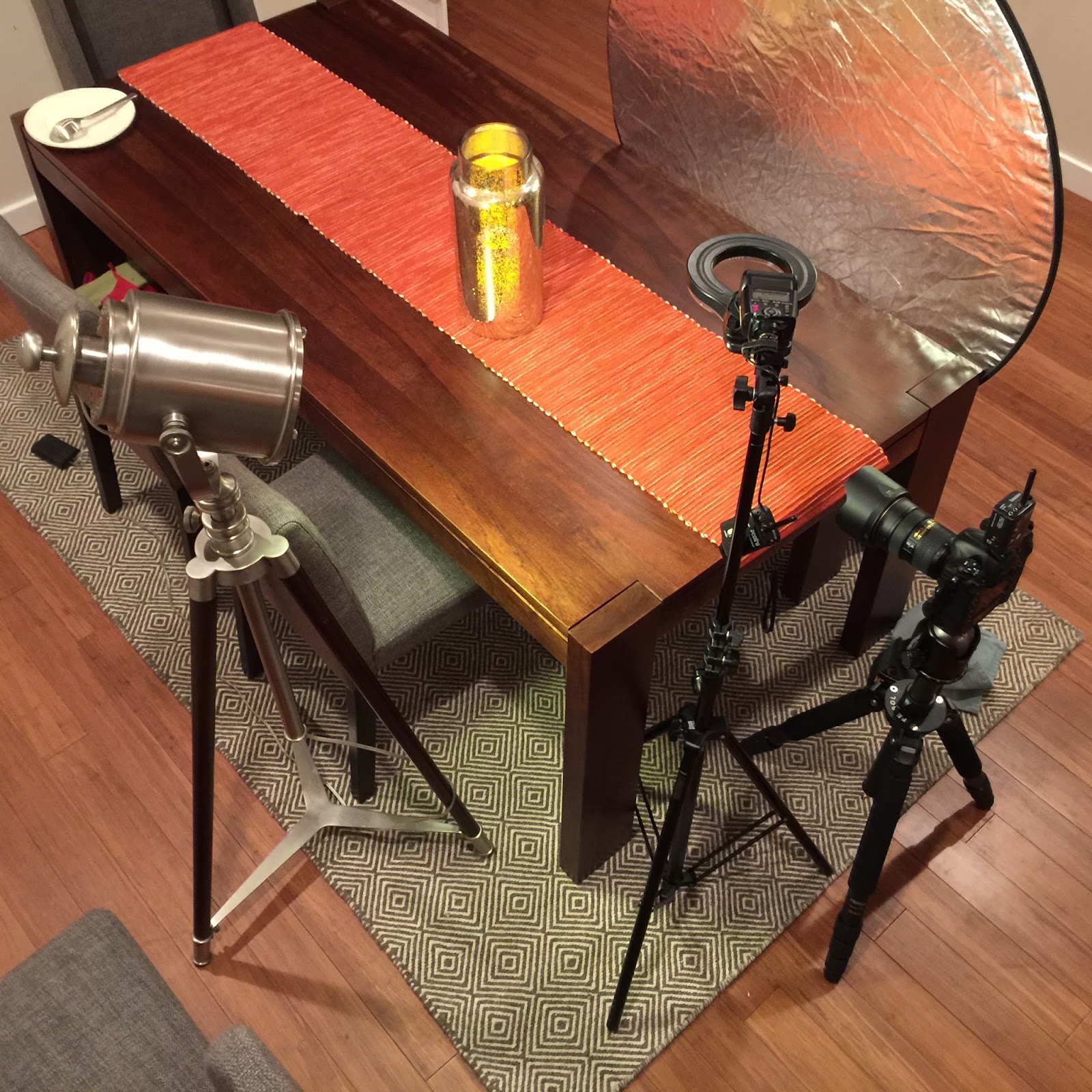 As you may recall, I [recently] resurrected the ring flash adapter.

I use it off axis in ways that can give a nice glow-rific pop to the subject.

Before I proceed, let me build this BTS shot, counterclockwise starting at Betsy (Nikon D4). Ok, it will be a crooked counterclockwise but I think you are all highly intelligent readers. Readers that don't waste precious time waiting in long lines at the neighborhood's Best Buy. I digress.

BTW, this BTS shot is straight out of the iPhone 6 Plus. Pure Awesomeness.

Doing all the heavy lifting for the shoot, as mentioned, is Betsy. She's my workhorse for 99% of my shoots.

Strapped to her is the Nikkor 24-70mm f/2.8G ED. Great glass for food photography IMHO as you can focus pretty damn close at medium distances. Sweet.

Ok, moving around and upward is the Westcott 5-in-1 Reflector Kit. Silver side in to bounce the hot light. Speaking of hot light. Are you scratching your heads? Notice that nice tungsten glow around the bread and the background? That is not a beastly light from a 50s movie set in Hollywood. Nope. It's simply a cinema styled tripod light from Pottery Barn. I always wanted to use it for a shoot and this was my chance. Somewhat directional, super warm and easily maneuvered. Had this light for a few years now and never tried it. As the great Homer would say . . . "DOH!"

Last but certainly not least is the ring flash adapter attached to a 430EX ii Speedlite, aiming straight down onto the table, where the food is to be placed. I'm tellin' ya. That ring, when NOT used like every other photographer looking for those signature catchlights, can be pretty useful. And to think that bastard and I used to be mortal enemies. Awwww. Sweetie. Sorry for locking you up in that closet for all those years. Ok. That was a little weird.

Hmm. Maybe I shouldn't count out the 2 big candles in the middle of the table. Why? The sure are players and more importantly significant light sources in the final image.

I'm mister forgetful this morning. All apologies to the people at Pocketwizard and my forgotten homage to the gear that has undoubtedly changed my career forever. The Pocketwizard Plus ii Transceivers did the communicating between camera and strobe. To think, before the Wizards, I was tethering a 25 foot cable; rig to strobe. Kooky.

The gear is, for the most part, set. Once those decisions are or were made, it's time to place a primary staging for the food. Before loading up the sandwich, I first place an empty bun on the mark. After all, I was not only preparing the leftovers for the shoot but for my belly as well. Needn't anything to get cold or soggy. So while the goods are warming up in the oven, each ingredient in a separate container, I found exposures and angles with the fresh roll.

As you can see from the final image and the BTS shot, I was in really low and really tight. Mere inches from the bread at 38mm. Love that freaking lens. Good luck getting in that tight on your 35 f/1.4. Hey, I love my primes, just saying is all.

Your photography professor would raise an eyebrow at such an exposure. Why on earth would I need to shoot so slow at 1/5 if I could simply bump that ISO way up?

First off, That ring flash adapter is a tricky dick. Sucks the ultraviolet straight out of your strobes. Hence the wide open aperture and if I recall, about a 1/16 power ratio . . . at about 5 inches!

Next, I wanted that focal plane to be nice and sharp. Why not crank that ISO to its absolute zero?

1/5? Yes. The room? Besides 2 candles and a 60 watt directional tungsten, the ambient was super dark. I wanted to capture those ambient sources so just like good southern BBQ masters would tell you, slow and low is the only way to go.

Too slow? NO! Don't forget the awesome set of FEISOL sticks that are firmly stabilizing the rig.

I know you are all curious to the contents of the subject matter within the delicious photograph. Look, ladies and gents, I am by no means a culinary master. Often times I can fuck up an Ellio's pizza. No joke.

You may find what I put in these Thanksgiving Leftovers a bit odd or disgusting but you know what? It was bangin!


1. And priority is a good roll. This roll came from the awesome Liscio Bakery in New Jersey. If you are from the Philly region and have had a Primo's Hoagie, then you have certainly eaten Liscio's bread.

2. Turkey. I think the likes of sage and rosemary were residing on the meat. Not sure.

3. Stuffing made from corn bread giving it a slight sweet flavor.

10. Fall onto couch. Unbuckle belt. Drift asleep with beer in hand and TV on.

Stay tuned as the video build out of the shoot soon to be released.