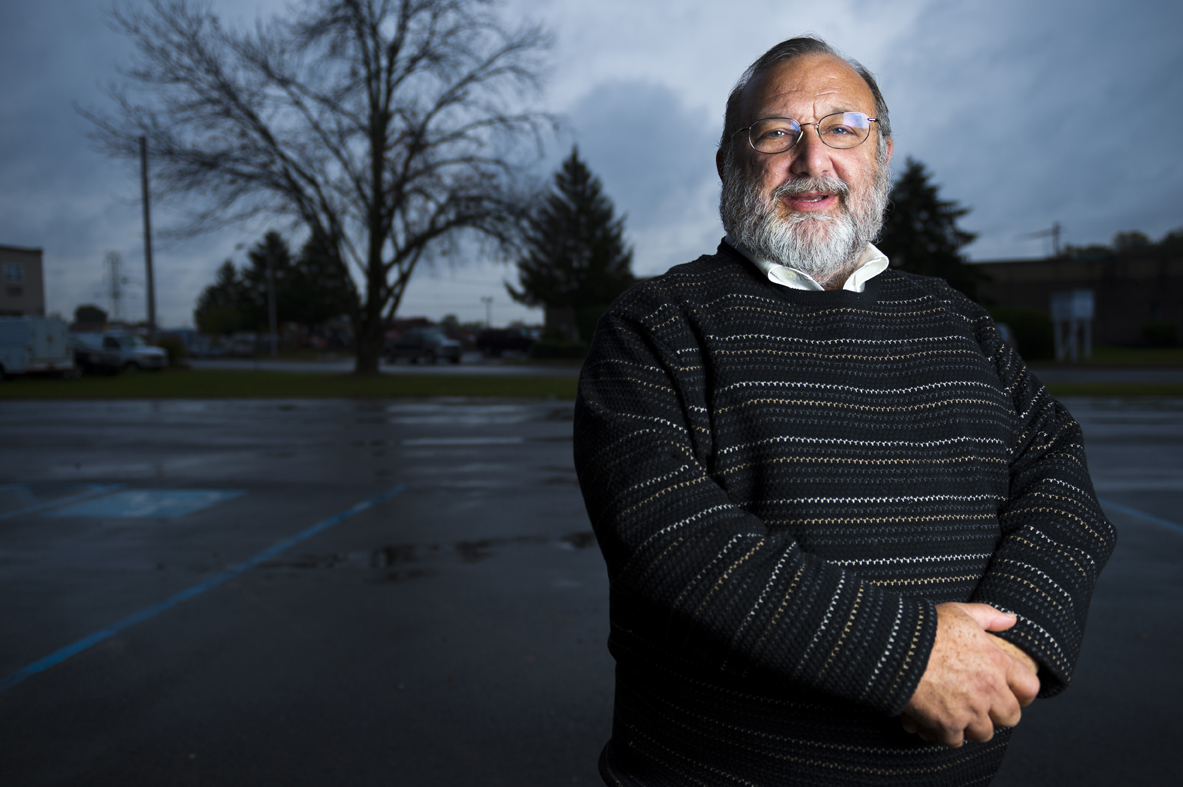 You don't need a Swiss bank account and a truckload of Profoto packs to create awesome environmental portraits.

Wait a minute. Something just doesn't feel right about this photograph. Sure, it follows all the rules of composition and exposure and queue the voice of Charlie Brown's teacher, Mrs. Donovan. 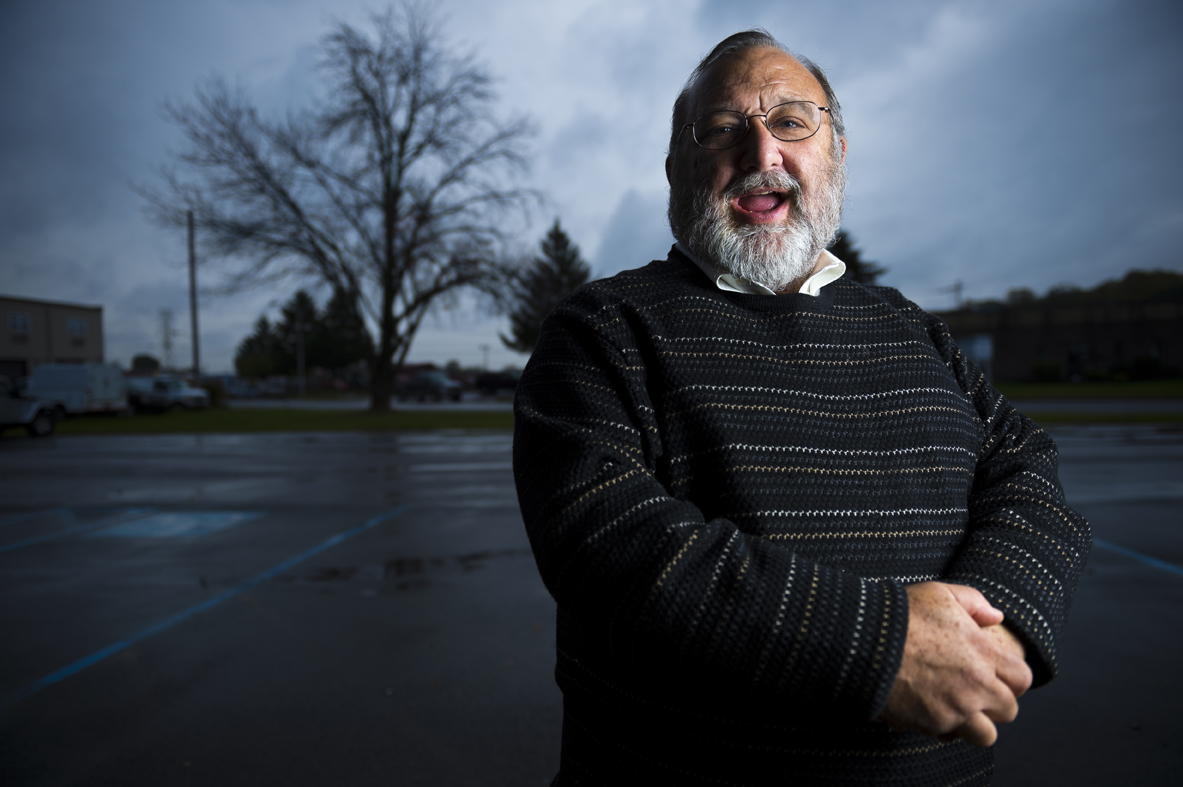 Ah, much better! This feels more . . . me. The opener, although pretty good, just doesn't get my boots knockin'.

It's the little things.

Now we can begin.

I introduce to you transportation guru and risk manager extraordinaire, David Ellis. For some years now Dave has been staking this claim at Frontier Transit, subsidiary of American Patriot Ambulance, both based out of Philadelphia.

Dave and I were wrapping up a shoot promoting breast cancer awareness month when we decided to, no pun intended, shoot from the hip. A run and gun shoot if you will.

It was just after dawn, cloudy and rainy. A strobist's wet dream, I shit you not. It's mother earth handing you a fistful of drama, no questions asked . . . that is as long as you are able to recognize its potential.

Sure the rain can be a problem but you will always have to prepare for such a shoot. I keep the Xterra packed with Ziplock bags of all sizes. As well as the baggies, I also pack rubber bands, also various sizes. On many occasions, I've strapped a bag or two over my strobes and threw them out in inclement weather.

[WARNING :: I do NOT recommend using your strobes in the rain or snow as the capacitors in the head pack enough electricity to turn your ass into the human version of Clark Griswold's Christmas turkey.]

Luckily, on this day, I didn't need to strap the sandwich bags to the strobes. I was able to get Dave, the gear and myself working under the buildings front canopy while still maintaining the integrity of an outdoor portrait.

The nitty gritty here my peeps. As I mentioned earlier, you don't need a crew of 20 dudes to lug your gear around on your next shoot. Think about the possibilities. Think of the savings.

Here's what I used for these drama filled pixels ::

Third bullet down. The 430. That's it. One light. For you OCD photographers, yes, there are two light sources, the ambient sky being the second. Jeez. Chill out.

The Xterra was packed to the brim with gear but only the aforementioned, critical pieces were used. 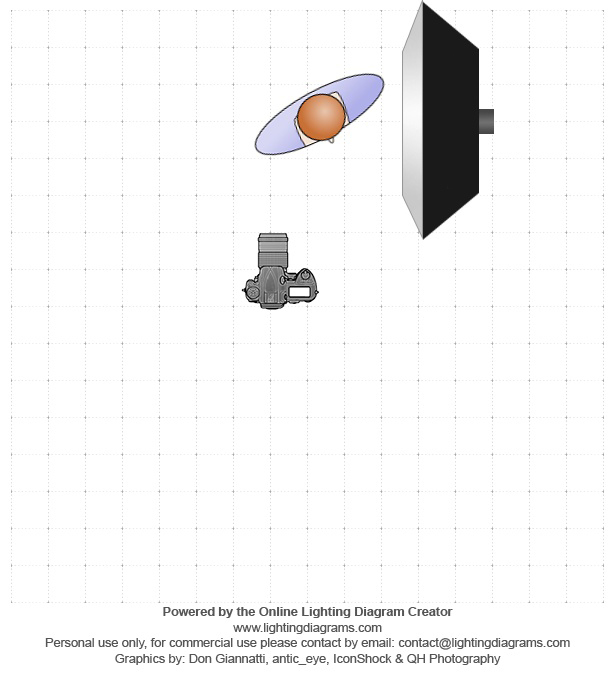 At 24mm and shooting at a lower, upward angle, you see the perspective we get of Mr. Ellis. Slightly distorted and yet larger than life. Heroic.

As for f/2.8? At 24mm, getting a shallow DOF ain't the easiest thing to pull off so in this case had to shoot Dave super close to pull some bokeh from the background.

Beginning the exposure, and I've shared this a zillion times, I build from, in essence, a black canvas.

Confused? Take a look at the shadow side of Dave's face in the second, more awesomely dramatic shot. Before adding any strobe, his entire face and body were just that, a black silhouette, entirely in the shadows.

Now, we have the rich, cloudy and ominous background with a subject in the shadows. Time to bring in the light source.

The 430 EX ii, perched atop the Calumet (we miss you in Philly Calumet) light stand, was shrouded by my favorite light modifier, the 28 inch Apollo by Westcott.

I stopped the strobe to 1/4 power and got the source fairly close, about a foot out of frame, camera right.

Of course the Wizards did all of the radio communications. I oft dream of you Pocketwizard.

Didn't take long to nail the shots we needed. Good thing because the wind began to get crazy and as usual, my sandbags were sitting on the floor in my studio. Doh!

I may have to really retire the post production parts of my posts. Why? I hardly do anything these days. The closer you nail it in camera, the less you have to do in post. Quite exhilarating really.

Actually, I had to use the healing brush a bit on Dave's sweater but that's a secret we will keep between us. Shhh.

Friends and fellow creatives, when I first began to light with strobes, I filled my bag with all the Vivitar 285HV heads that I could afford. Every single shot had to be lit to a radioactive level, more was always better.

And you know what? I focused less on my subjects and more on lights and as a result, photographs suffered.

These days? Sure. When needed, I pull out the plutonium but on many shoots, one light is more than enough . . . as was here today.

Now stop obsessing over the B&H catalog that just came in the mail and start creating.