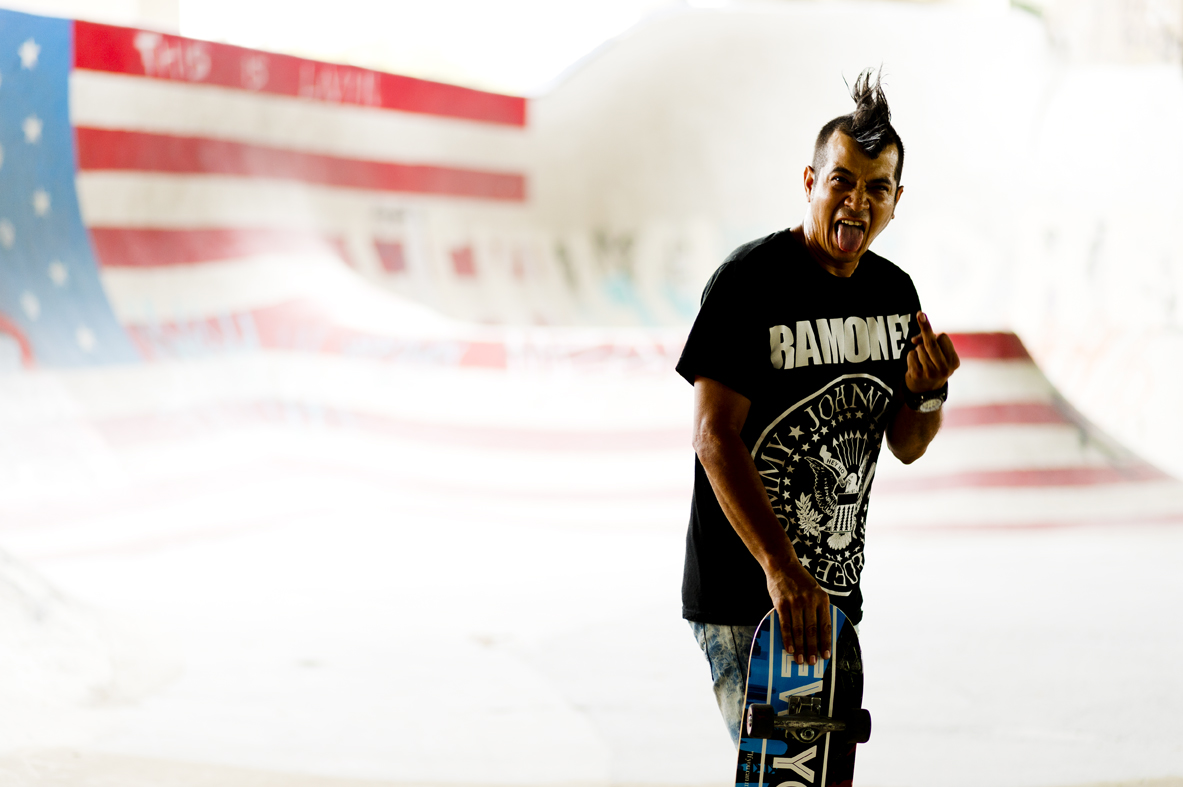 Like the deliciousness residing in the refrigerator calling for me in the late hours of the night, so does the mysteriousness, the furtiveness of the skatepark.

This would be my second year shooting at FDR Skatepark in South Philly. As in the past, I departed, wanting just one more taste. 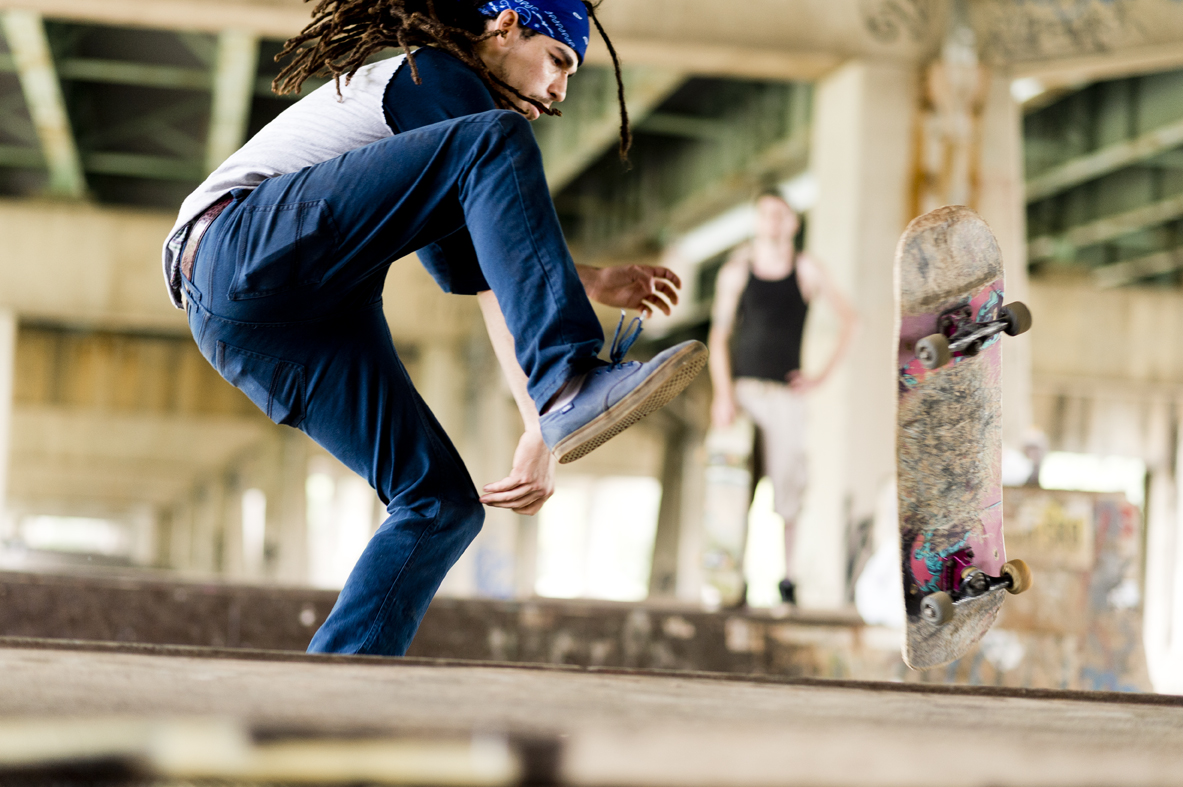 The park had been calling me for some time now. It was August of last year, a year ago, when I shot there last.

FDR skatepark, appropriately situated beneath i95, at the ass end of FDR park. Perfect.

This skatepark is't the place you take your children with their toy store boards and shiny helmets. Only the hardcore skate here. Dusty attire minus any protective gear.

Talk is minimal. The air is filled with the aroma of home grown and intensity.

Pounders of PBR and graffiti give the decor to the unkempt ground. It's beautiful.

Loading up my bag with the bare minimums, my heart began to race with excitement as the reality of shooting on this sacred ground would soon materialize. 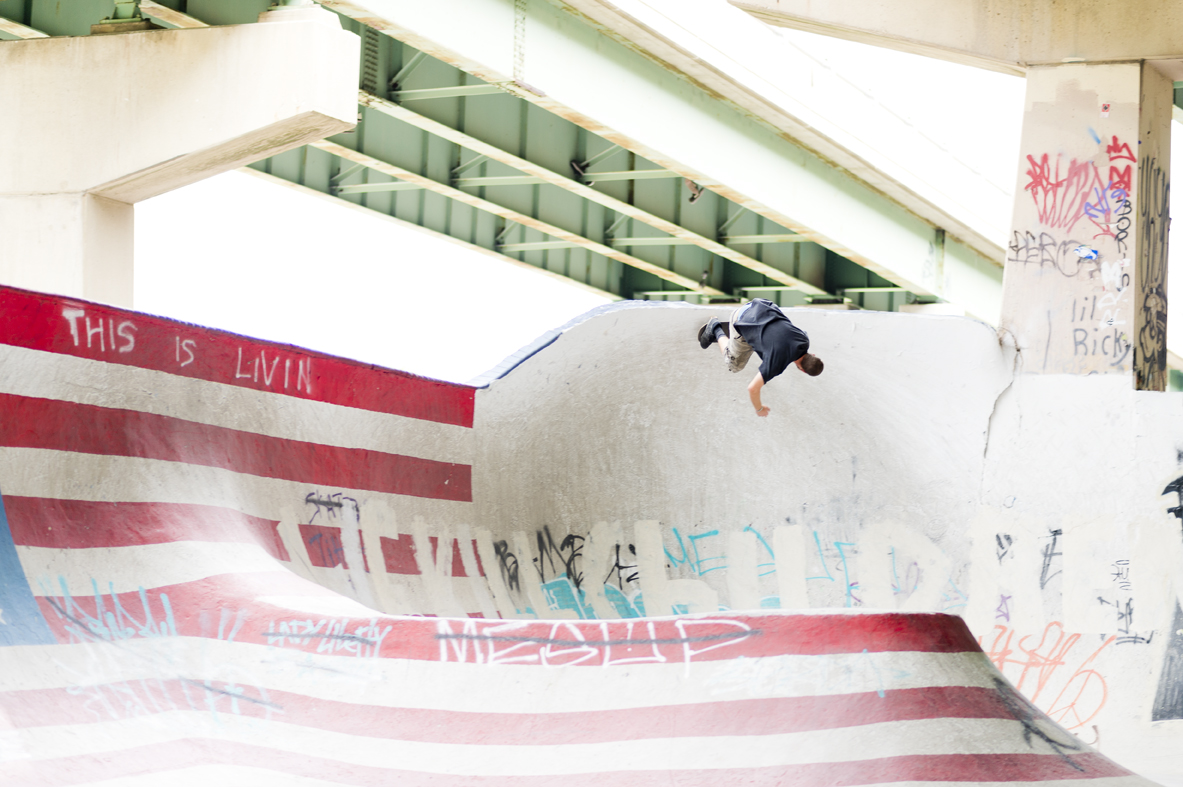 Once I jumped into the Xterra, before leaving home base, I gave my bag a one over. In the past, I've shown up to the park with way too much gear with the thought process I keep with my clients; better to have too much than not enough.

Guess what? This place is raw as raw can be. Showing up with a bunch stands, Wizards, strobes and such just feels a bit, well, I don't know how to explain it. What I can say is that I feel pure when I show up with nothing but one creative mind, one coffee, one bottle of water and one camera in my sack (with three lenses). 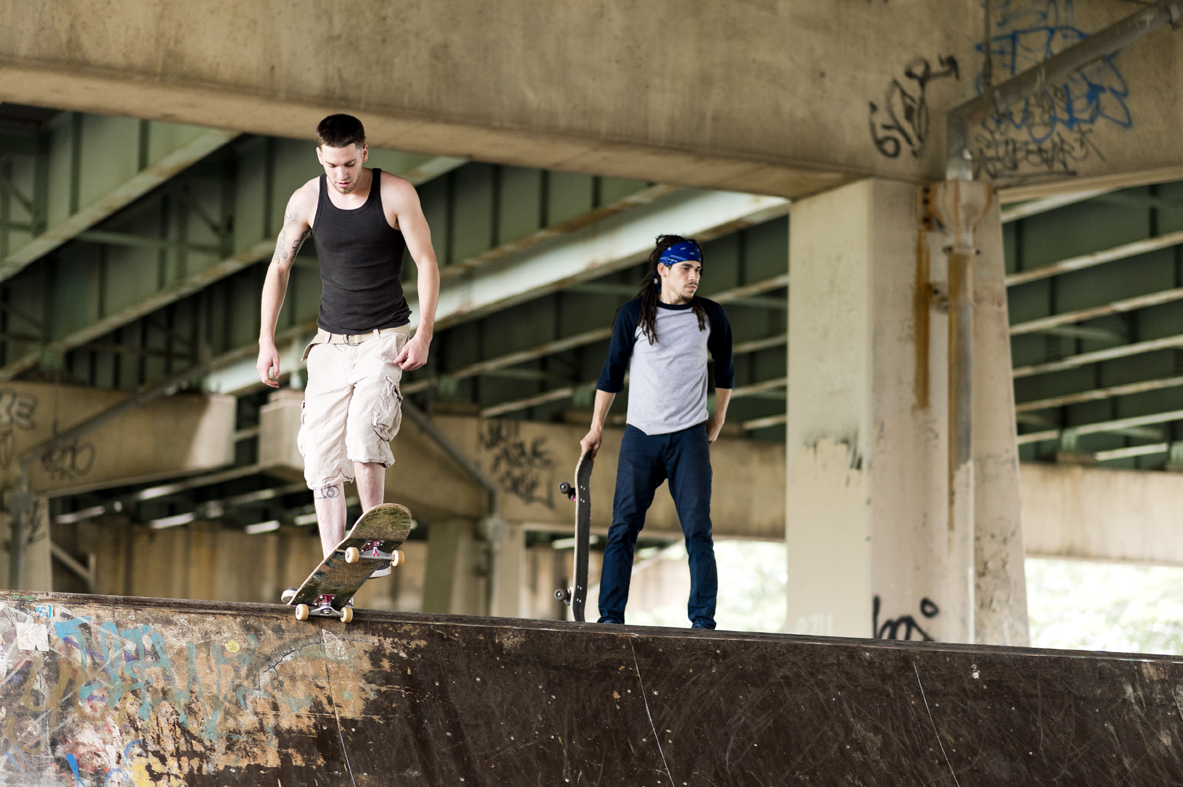 I wasn't concerning myself with apparent light size, flash to subject distance or any of that. Ambient light would be the only means of creating an exposure. That and the truly awesome sensor that lives in Betsy's belly (Nikon D4). Shit, I keep forgetting to mention the glass. Yes, the ambient, the sensor and last but not least, fast lenses (50mm f1.4, 85mm f/1.8G, 24-70 f/2.8G ED).

Pulling away from my digs, I crank Jack White's newest album, Lazaretto. If asked who is my greatest inspiration in the world of art, the answer every time is Jack White, the musician. What he does with a guitar simply twists my brain into knots. Not only brilliant, different. The recipe for success in the creative world. 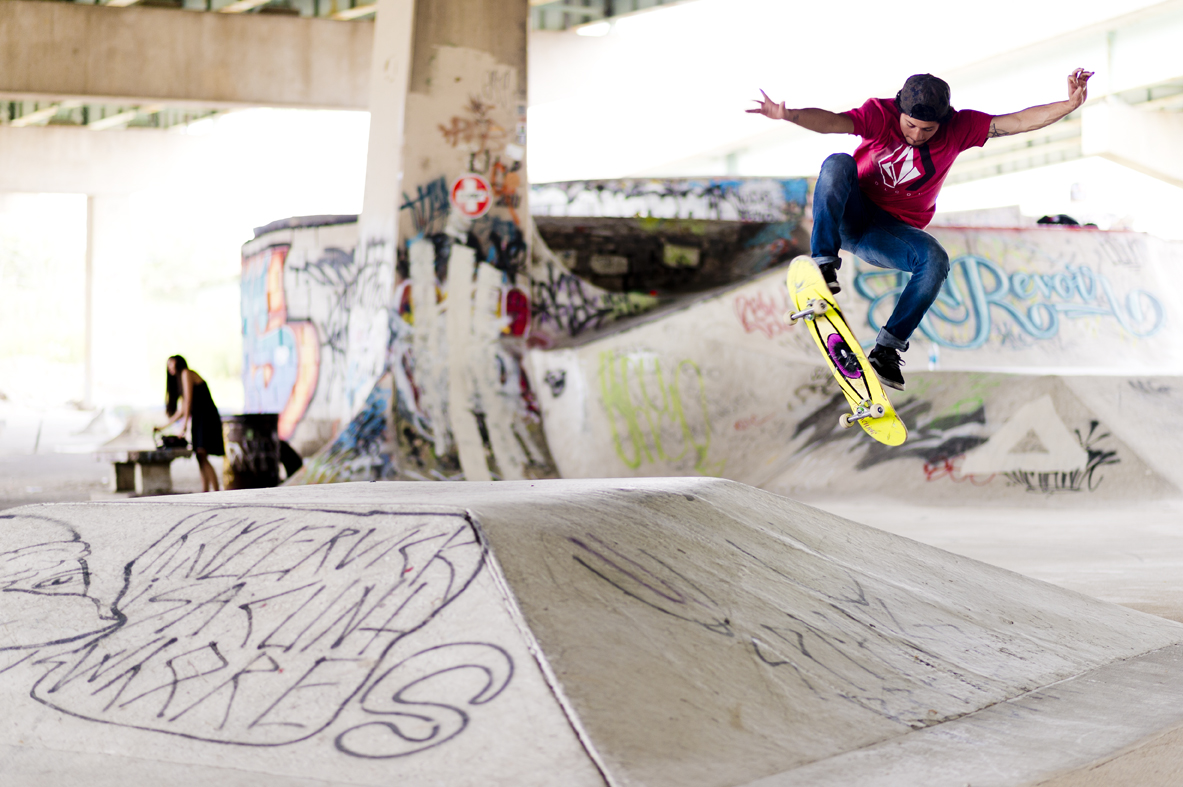 It was just after noon. As I throw the Xterra into park, I immediately notice a familiar face; my cousin Andrew McColgan. I had absolutely no idea I'd see anybody I knew but I'll tell you what, it sure doesn't hurt to have an in, especially in the clandestine fraternity of skaters.

Before pulling out any gear, I walk over to greet Andrew and introduce myself to a few of the others. Trust me my fellow creatives, in any environment where you may be viewed as an outsider, it's better to get permission rather than rudely intrude. You'll get much more respect and with that, privilege.

I sipped my still piping hot coffee as I made my way back to the SUV, taking in my surroundings, identifying the light and deciding which glass I would start the day with. 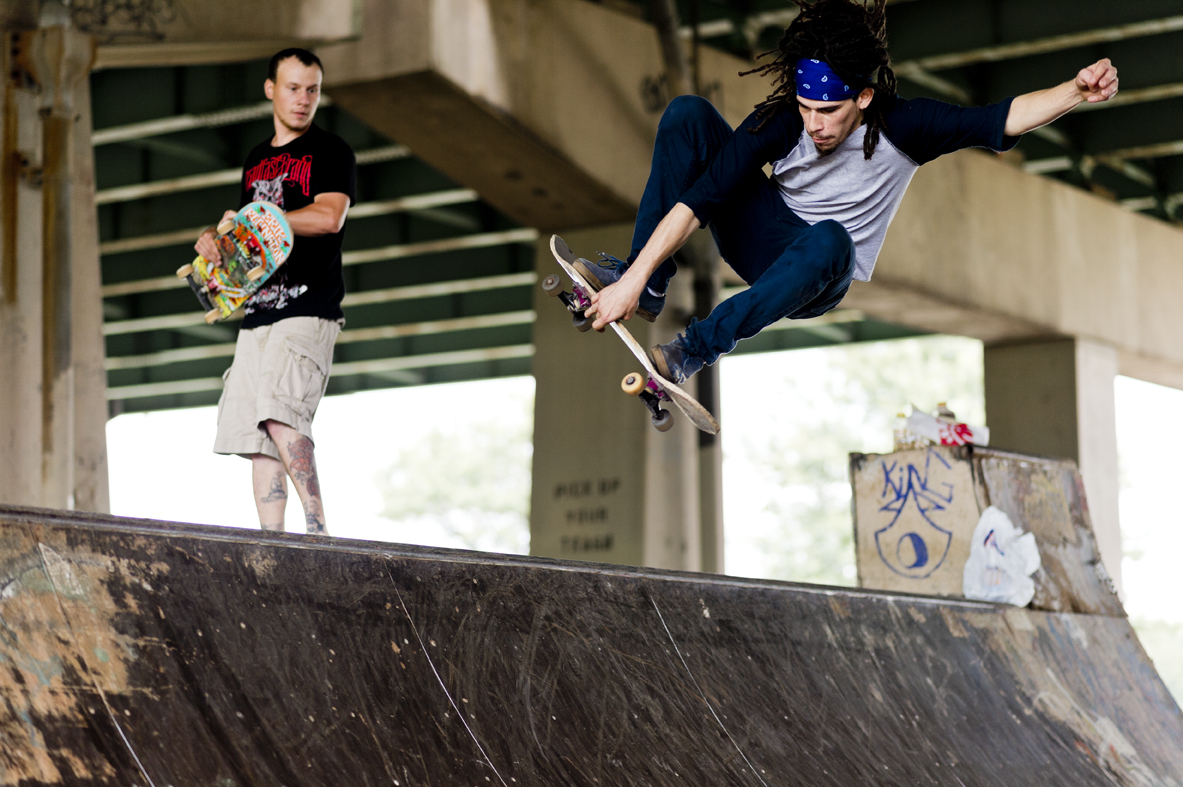 Once Betsy was loaded and ready to rock, I walked over to the lower of two half pipes, where most of the action was happening. I then spoke to a few of the skaters as one. I explained to them that they needn't worry, that I was fully prepared to endure any injury that came my way. Harm's way would be my sidekick on this particular day.

Funny, as I was wrapping up my possibly idiotic statement, one skater landed hard, on his ass, launching his board from the half pipe and directly into my shin. Suppressing my pain, I smiled and again gave full release that if any injuries were to occur, we were cool.

My friends, I'm not in any way telling you to put your life at risk but if you want to create an image that is awesome or more importantly, different, there are some lines that you'll have to cross.

I began warming up from some normal, safe positions. Eh, shit wasn't making my hair stand up by any means. I had to get freaky; low angles, high angles, tight and I mean super tight.

At one point I asked if I could lie on the ramp, on my back facing upward on the incline of the half pipe. Basically my big ass would be an obstacle. A third time I explained that if anyone would crash into me that I would not be angry.

As I sit here typing, you can deduce that I'm still alive.

After shooting at the lower ramp, we all made our way to the big beast. A 15 footer if I had to guess. I made my way up the back stairs of this behemoth. Each rise looked like a plank of wood from the Civil War era. About half way up, my stomach began to tickle just a bit. Go big or go home right? 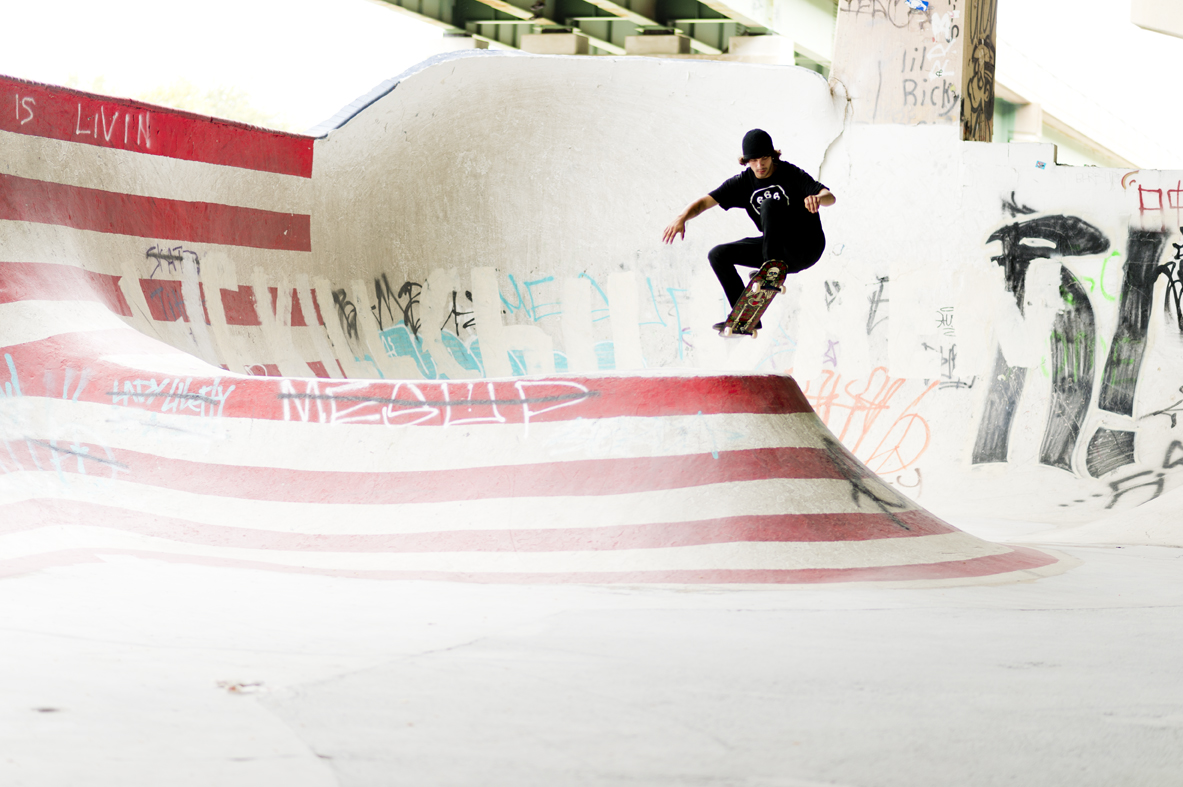 The view from above was beautiful. A bird's eye view of the action below. Interestingly, even though an awesome perspective, I didn't get the shots I wanted up there. I prefer closer up and in your face.

Last but not least, I worked my way over to the "Bunker," the area of the concrete pools and the "Dome" are located.

There I discovered what was, in my opinion, a beautifully choreographed ballet of the underground.

Again, not much being said, just pure rhythmic talent, one by one, taking their turn attempting to defeat the concrete jungle.

I was in heaven.

The big lesson of this type of shoot is that there is a shit load of variety. Never would I pick and exposure, set it and forget it. That would be photographic suicide.

One option? Here comes the lynch mob. Pick an auto feature such as Aperture Priority, Shutter Priority or hell, go crazy and dust off that Program mode. 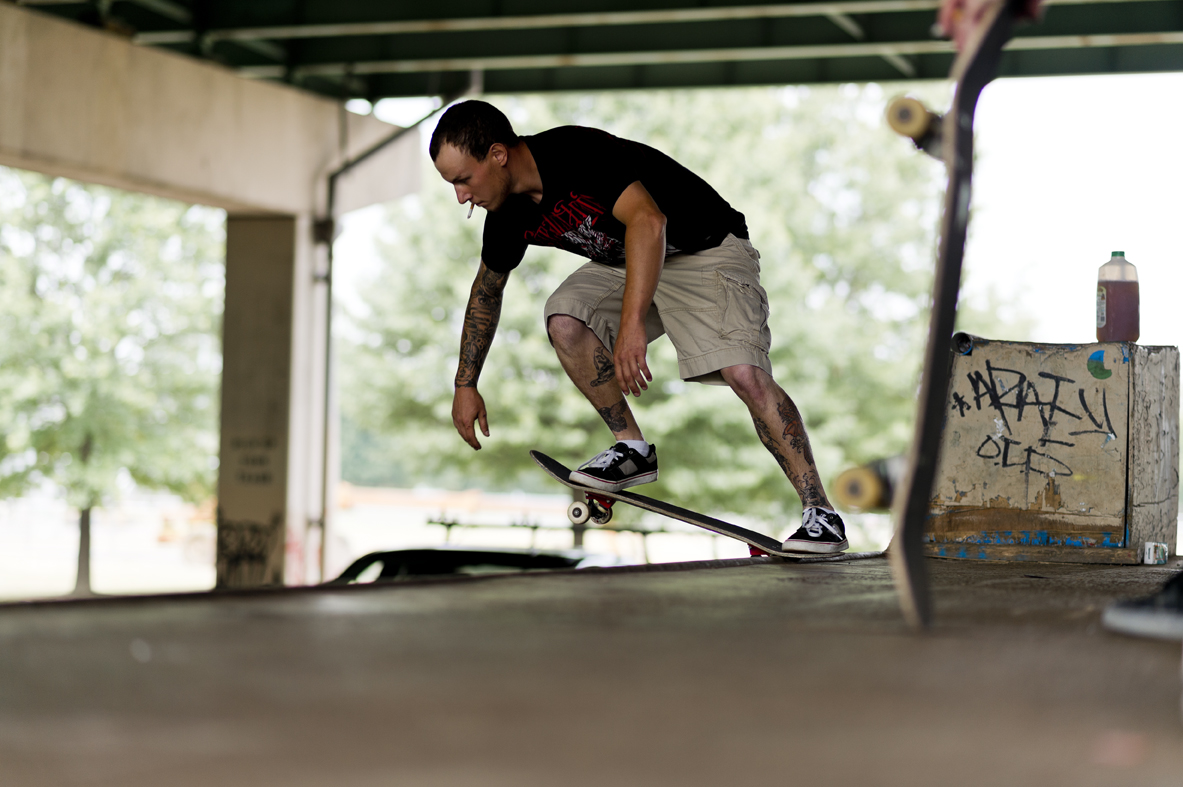 Damn, saying that was more dangerous than lying on the half pipe.

People, if your shooting under a freaking highway, there are going to be some lighting changes based on where you are shooting from. You can make sure to keep an eye on your meter all day long while you tweak your settings and missing the shot or you can find some solace with one of your auto features. With that you can focus on the action around you.

Personally, I still worked in Manual mode but with ISO running automatically. In semi-full manual, I would be able to decide, creatively, the shutter and depth of field. I have the ISO locked never to dip below 100 or go beyond 12,800. I'm totally comfortable shooting at those or any ISO levels in between.

With the comfort of a really high ISO, you can shoot with a super fast shutter and be sure to freeze the lightning fast action of the skaters. 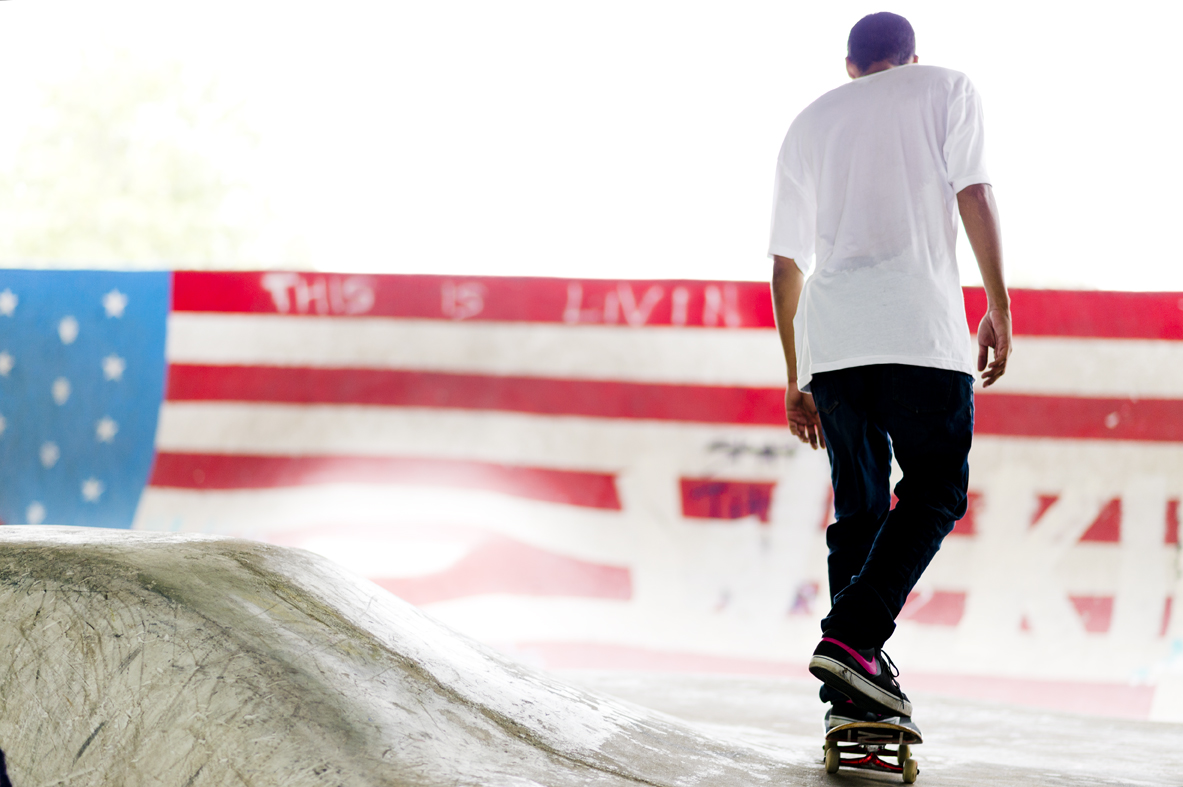