born on the 4th of july 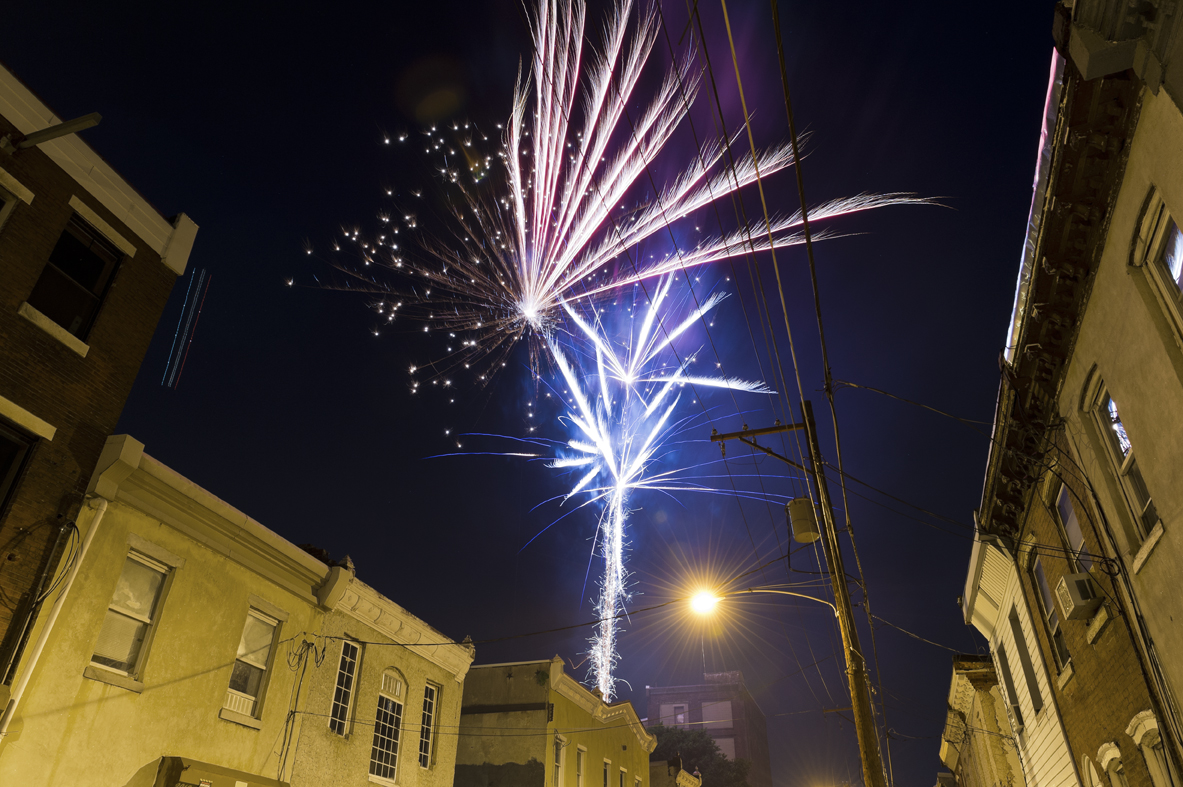 Actually, it was the 3rd that I first saw the world. Growing up, my parents always told me that the big fireworks were ignited in celebration of my birthday. To this day, there's still a morsel of imagination that the beautiful elegant explosions in the evening sky are indeed a beneficence in my honor.

Just A Few Days Ago

I think it was my friend Ed Sinitsa or one of the other neighbors in the condominium complex that mentioned the potential view of fireworks from the rooftop deck. I can't believe I didn't think of it. I mean who doesn't have a bit of pyromania running through their veins? We all love a good firework display and this would be a great opportunity to stretch the creative legs.

It was about an hour before sunset. The wife and I were enjoying a couple craft beers outside. Soon thereafter we headed indoors and I was about to doze off on the couch. Yes, the sun was still up and I was ready for bed. Pathetic. I know. Somehow, someway, without chemical assistance, I got a second wind.

Stefanie and I grabbed some beverages and headed for the roof. Not quite fully revived, I almost left the camera behind. Guilt flooded throughout my body.  I couldn't believe I was about to leave her in the lurch.

Quickly, I grabbed Betsy (Nikon D4). She was already dressed and ready to rock and roll. She was outfitted with a very versatile 24-70 2.8 and a set of long sexy legs; Feisol carbon fiber tripod system with ball head.

The sun began to dip below the horizon. 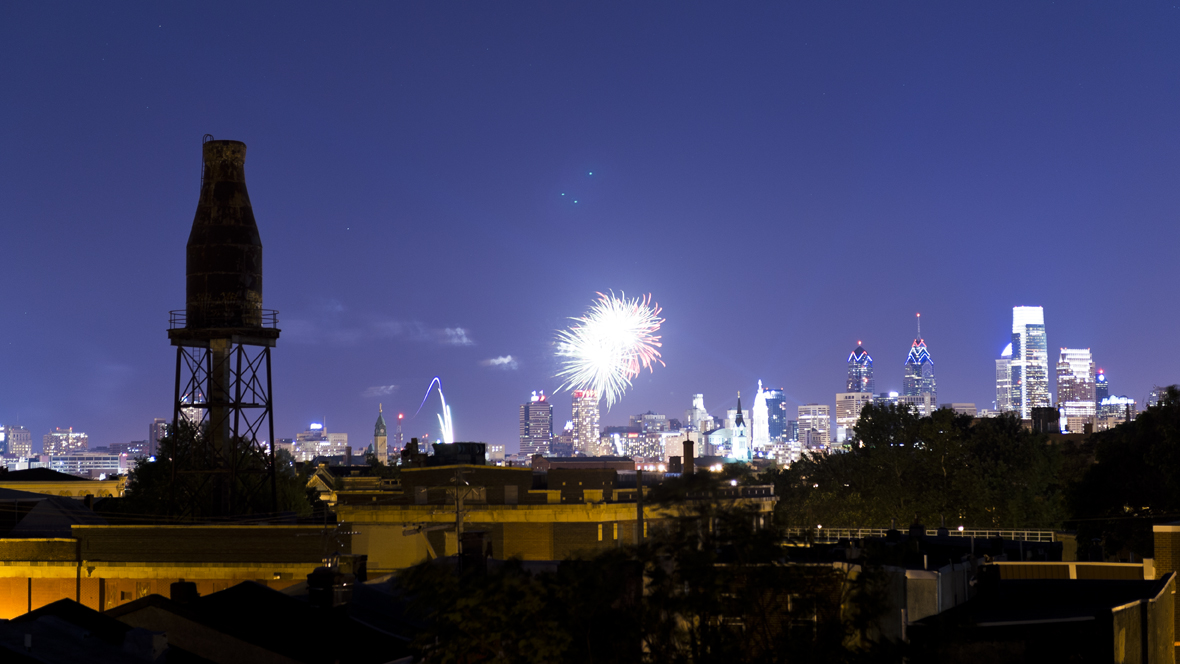 I couldn't believe my eyes. Fireworks were visible in every single direction. The Art Museum, The Ben Franklin, shit, New Jersey too. Center City to Germantown, North Philly to The Schuylkill River. It was quite breathtaking. 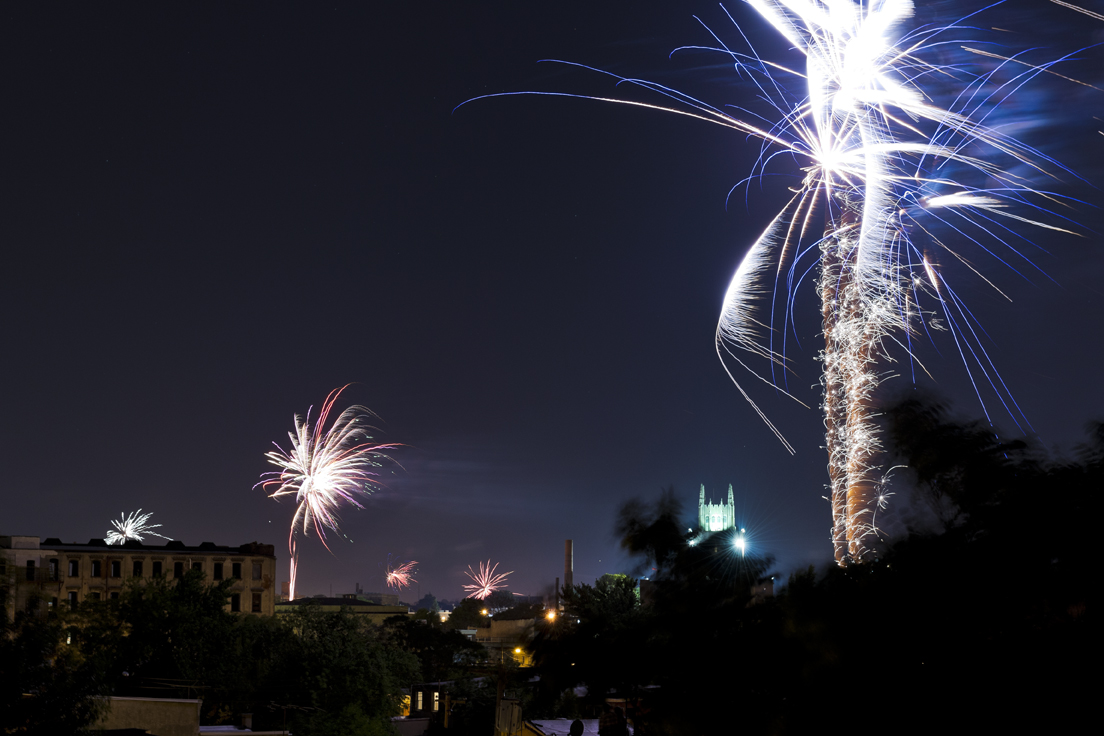 Honestly, I didn't know where to plant Betsy's beautiful legs. Running from one corner of the deck to the other, I was catching fiery explosions from the entirety of the rooftop.

What lured me more than the big elaborate shows at the city's landmarks were the equally impressive neighborhood displays. Popping up from side streets all around were fascinating firework arrangements. It was a dogfight amongst neighborhoods. Who would be the biggest, baddest of the block?

Speechless? That would be an understatement.

Betsy, Stefanie and myself headed down to street level.

Over by the El, I heard what sounded like a machine gun with an infinite amount of ammunition. No joke. The pops were popping consistently. . . without taking a break. I couldn't figure out how a pack of firecrackers could last this long.

Soon thereafter, a new eruption of fire in the sky had commenced. 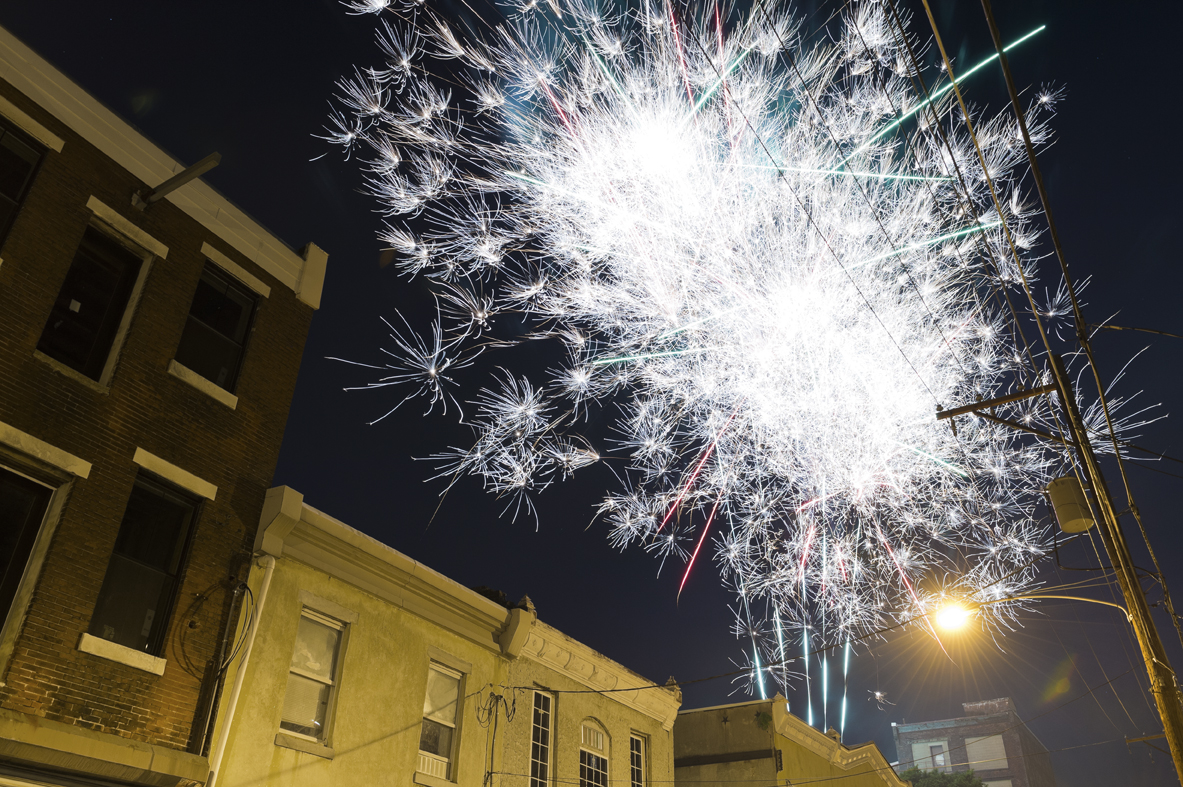 I wanted to get in deeper. Behind the scenes if you will.

I left Betsy's legs behind. Not sure what I was headed into, I thought packing light would be the safer bet as this would draw slightly less attention to my presence. Why? I didn't want to look like a stringer for a local media outlet. Who knew if there were permits or not? I did know that I didn't want them to think I was a bad guy. Nope. I wanted to blend. Simply there to create cool photographs of this visual experience. 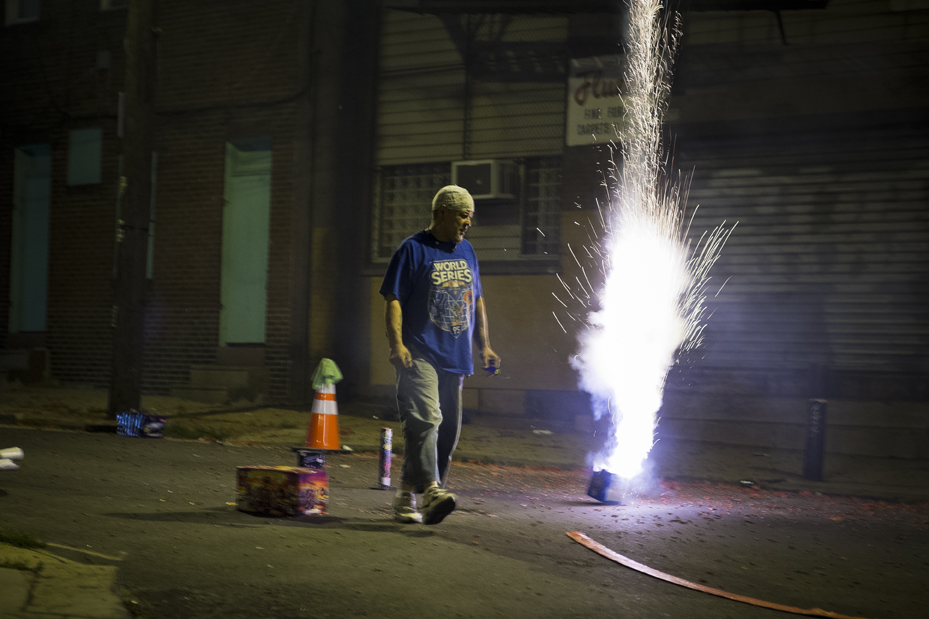 The emcee of the show looked like a true hard working blue collared Philadelphian. Your next door neighbor. He wore a white bandana, blue 2009 World Series T-shirt and a pair of jean shorts that just about reached his ankles. Clenching a small LED flashlight in one had and an igniting device in the other, the man meticulously conducted the orchestra of fire. 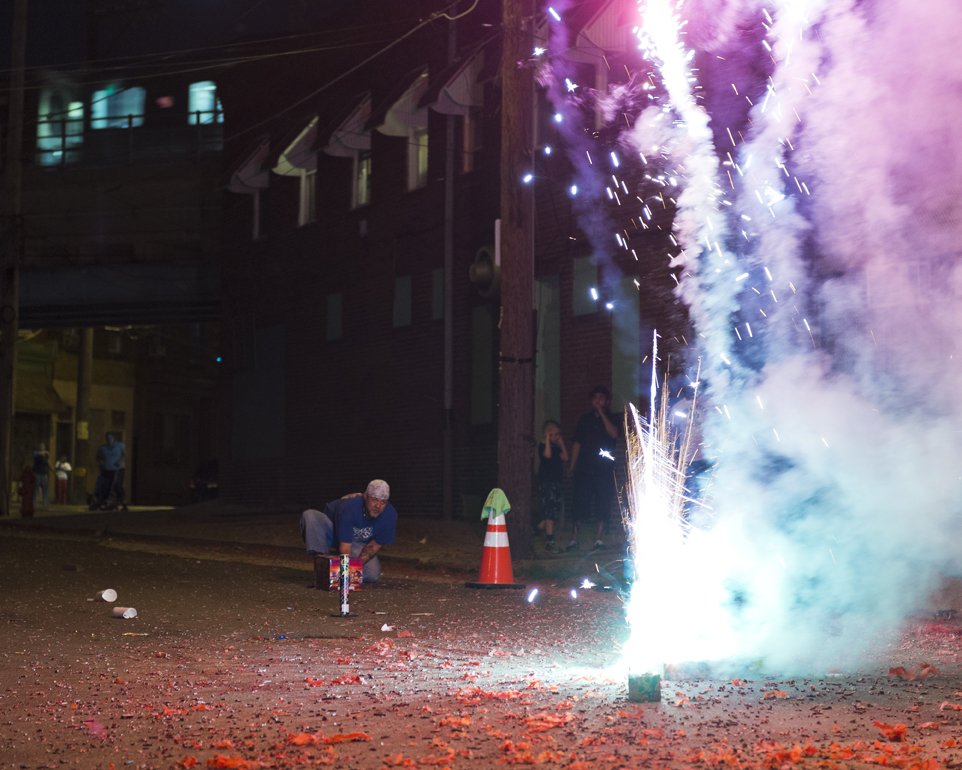 The look in his eyes was indubitably familiar. Like looking in a mirror. Focus and intensity that rivals that of an eagle; zeroing in on its prey hundreds of feet below. A thousand yard stare. I know it well. It's where you have to get if you want to be the best.

I was drawn more to his actions, his methods, more than I was the explosions over my head.

Similarly, like this man, like the eagle, I began to zero in, raising the viewfinder to my eye, making calculations to dial in exposure without even knowing that it's happening. Instinctual mathematics by this point. 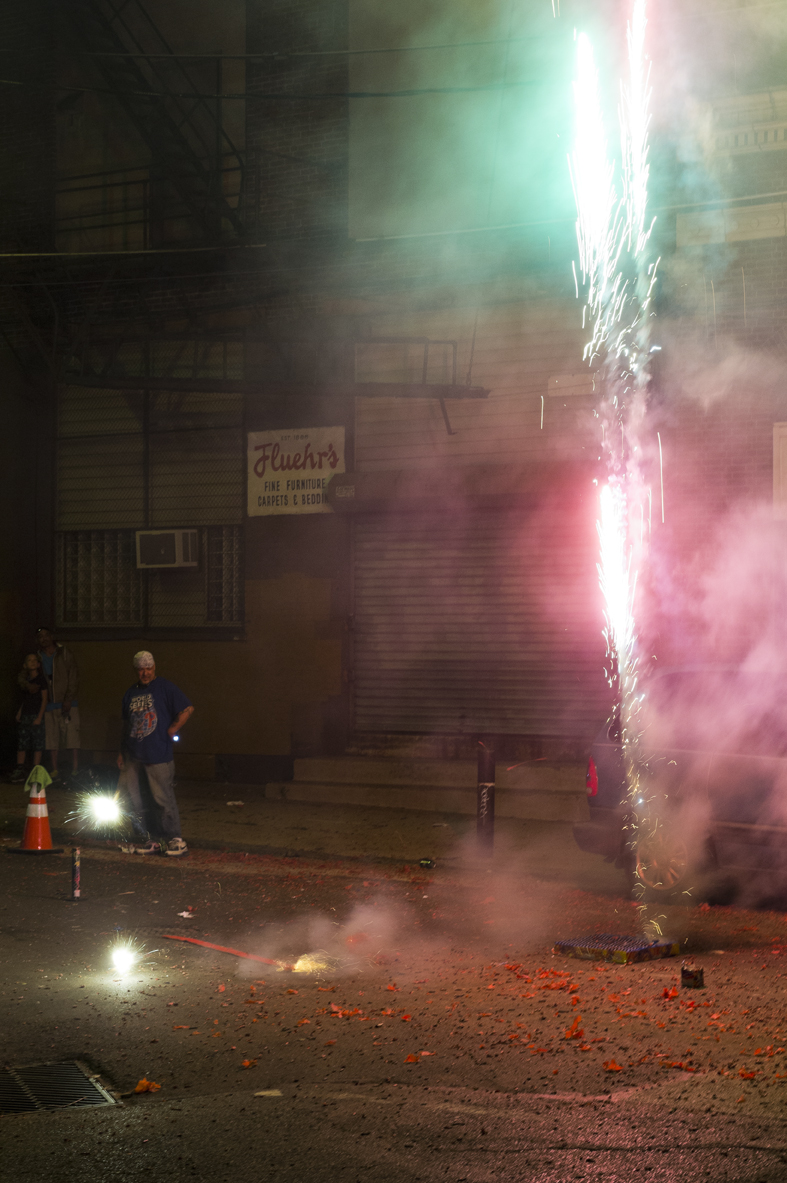 The street was enveloped by a sea of ruptured paper and ash alike. The endless machine gun-like popping had numbed my brain by this point. The permanence had worked its way from shocking to soothing; pure Zen.

Having been as close as I was, my body began to get hit by shrapnel produced by the strays often produced by fireworks. The first few hits were frightening but after the fifth or so, I was no longer phased. I kept a closed hand tightly around Betsy (Nikon D4) as I feared her being burned more than my own body.

The aroma of burnt paper and black powder were hidden in the pillared plumes of smoke that danced through the streets. Bitter was the taste of sulfur on my tongue.

The pace was fast. This meant that each photographic decision had to be made two steps ahead of the maestro. A game of chess.

Through his body language I would deduce his next moves.

Here's the skinny (and fat) of it.

To capture photographs of perfectly sharp firework displays in the sky, such as the ones herein, it is ESSENTIAL to have a tripod or other camera stabilizer. You see the cool streaks of fire across the sky? My friends, an automatic exposure will help you achieve this effect. The blinding brightness will cause an auto exposure to really dial up that shutter speed to something you'd use at high noon on a white sandy beach. f/16.0 at 1/1250 or some crazy shit like that.

No stabilization needed. But you aren't going to see anything but a few sparks in your frame. You may even think you missed the shot and caught the Little Dipper. To paint light onto your frame you'll need that stabilizer and a long long exposure.

Well, that all depends on how long you want those trails of beauty. 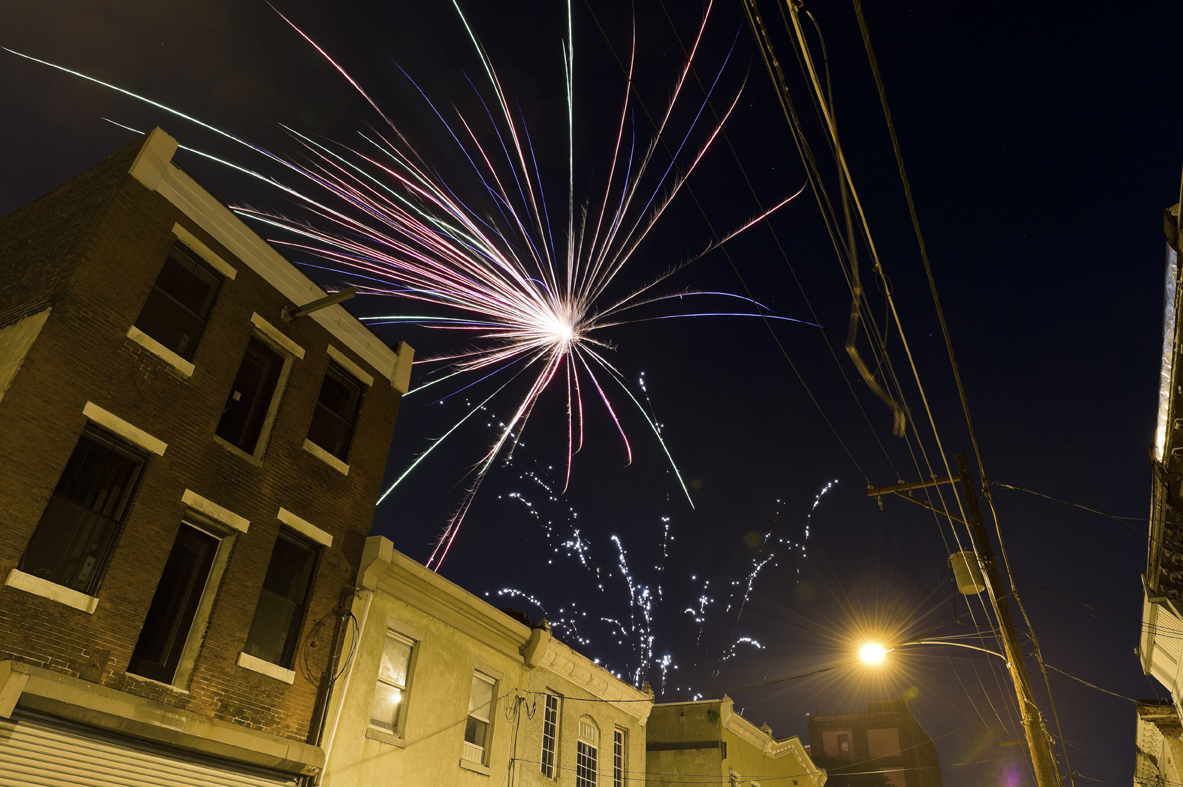 My choices were all over the map as I wanted to try a few different looks.

The fastest shutter used was 5 seconds and the slowest was at 8 seconds. That's a whole lotta time to let that light paint your sensor. Careful now, don't bump that rig while exposing or you'll possibly get a ruined shot unless your going for something abstract.

You'll want to keep the intoxicated away from your gear as well. Trust me. Look, not only did I get a few curious folk that wanted to touch Betsy, I also had to privilege to have an ass or two bump the rig. Yes, there were a few blurry frames.

Now, as for shooting the man behind the magic, that was a little tricky. I wanted to get a slow enough shutter to get the fire to burn in nicely but needed fast enough to freeze the motion of his actions.

I decided to work in happy mediums. Keeping anywhere between 1/10 and 1/50, I had to be certainly sure that I was perfectly still and hopefully my target would miraculously be static as well.

I can't wait until next year!