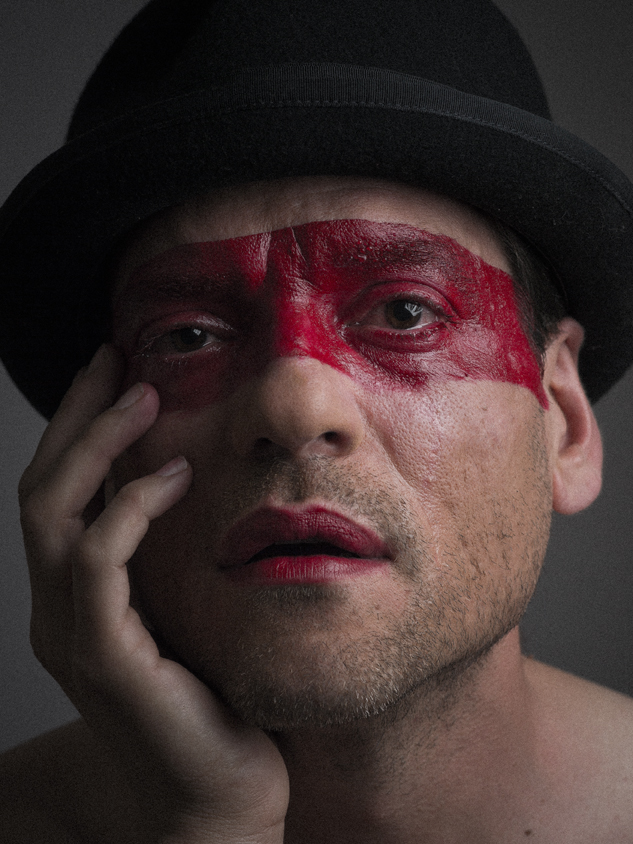 A couple weeks ago I gave you peeps the first installment of my works with the amazingly awesome, truly rad actor, Peter Patrikios.

You need to catch up over [here] if you haven't already ; Androgyny With Peter Patrikios.

Today, since you guys already have a background on the actor, I'm going to touch a bit on some pure nerdy-ness. Further, I'm pleased to say that you will definitely be seeing more of Peter through a number of installments.

I want to share with you the how to-s, the behind the scenes of how some of the shots were achieved. I may post some BTS of a photograph from the original blog [post] or I may find something totally new from the archives. Who knows. I can't predict what the hell I'm going to eat for dinner tonight let alone what the hell I may feel the urge to blog about next week or next month even.

After 7 amazing hours of location jumping, setups, breakdowns and most importantly, shooting, I quickly collapsed out of utter exhaustion following the Peter session.

It wasn't until the following morning that I woke up, reenergized and downloaded the hundreds and hundreds of RAW files.

There were some key shots during the shoot that I knew would be featured in the blog. It was the hidden gem that didn't catch my eye until later. A lesson to all creatives: Keep all of your work. Review it from time to time. Never delete. And in a few months, a few years, check it out again. You never know what you may find.

Not to flashback/flashforward too much but let me rewind to the last part of the shoot.

Barely able to muster enough energy to fire up my Wizards, Peter barely able to stand on his own two feet, we managed to hit the last round, the extreme close ups. 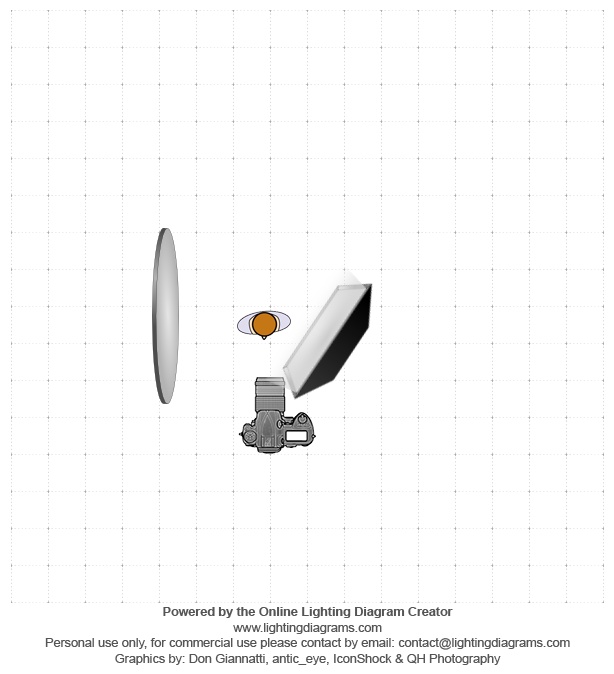 Peter wanted to play the sad part, crying even. Careful not to mess up the makeup, he added some scary solution to his eyeballs. Actors use this painful concoction of who-knows-what to bring their eyes to tears while simultaneously bring up some nice redness.

It was almost painful to watch Peter suffer. Shit, I could have sent him to slice up an onion or two in the kitchen.

As Peter was stirring up his inner misery, I adjusted for the lighting as I saw fit.

I boomed a 28 inch Westcott Apollo, pretty damn tight, camera right, Rembrandt style, so that I would get some nice fall off. The fall off would get the white background nice and gray and for some dimension, fall off on the far side of Peter's face.

The dark side of the face was a bit too dark for my taste so I brought in the Westcott 40 inch 5-in-1 reflector to camera left, silver side in, for just a tad of fill.

The workhorses of this powwow were as follows ::

1. Betsy (my love, my Nikon D4), working at f/8.0 to get a nice deep DOF (depth of field). Her shutter was a 1/200. In studio I typically work at her sync speed of 1/250. I may have bumped the wheel. No worries, as I was working at a super duper low ISO 50, with the other variables, I could have probably slowed the shutter to a full 1/1 second and kept any ambient from bleeding in.

The strobes had the room.

4. A set of Plus ii Wizards were the communicators of light. If you haven't made the investment, I ONLY recommend Pockwizard to trigger your strobes. The are hands down the industry's standard. Period. Yes, you've probably heard me utter those words many times before and
be prepared to hear them again.

5. A lot of Calumet gear. Lightstands, Arctic White paper background, support system, all Calumet. Thank goodness they un-bellied their bellying up. Some good people threw them a life raft. Saweet. I love Calumet, the good people and their equipment.

Holy hell, am I sounding like a true pitchman for these companies? I swear, I'm just pumping up the good gear I use on a daily basis. Shit, trust me, I got a lotta gear that I never use and could say some pretty nasty things about but I try to avoid that behavior, unless I feel the world of photography needs to learn about for the good of the community.

Notice the title of today's post? I mention fashion mag style. If you take notice of fashion photography, often times you'll find that the images have a very film grain-ish style. Sometimes this is done, well, with a film camera. Sometimes it is attributed to a high ISO. Other times it's done in post.

You are about to read some blasphemous words. Please. I beg of you not to hurt me. 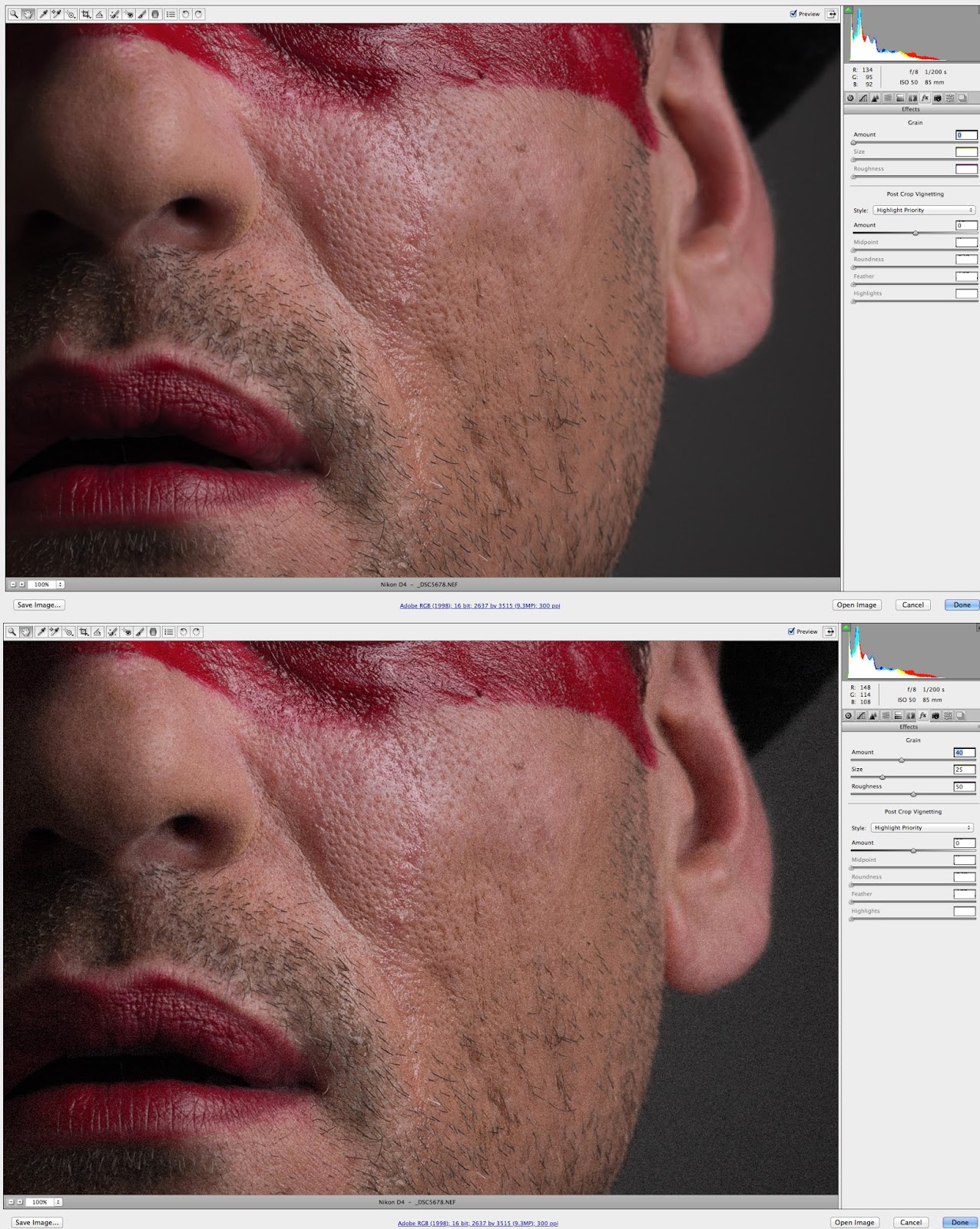 Wow, this is tough to say. Pixel peepers worldwide will want me beheaded.

Take a look at the above comparison. The top is out of camera at ISO 50 viewed at 100% magnification.

Yup. I said it. Did I just hear somebody knock at my front door? Shit. I'm a dead man.

Look, I never thought I'd say those words myself but it was true. I felt this shot was very Vogue cover like and felt the recipe called for some added noise.

Hey, I've been on the good and bad sides of noise (grain) but adding it to a perfectly clean image was somewhat new territory. And you know what? It felt good to break the rules.

I've been doing a touch of experimentation in post production these days. Duh. Well, not only did I add some noise, breaking my comfort zones, I also effed with the hue/tone of Peter's face.

To get this "look" I simply cranked the Saturation and pulled back on the Vibrance. The results very fashionista, very pleasing.

Did I forget anything?

Ah, speaking of recipes, that's a great way to describe how this final image came to life, a recipe. All ingredients must play nicely together or else the final dish will be shit.

Think about it. Peter and I had to jive, professionally and creatively. His taking to my direction, his great poses, the gear, the light, the post production - all of these ingredients to create one single photograph.

Now, the next time somebody tells you they just need one photograph and it will take you five minutes, do me a favor and smack them across their face!

Thanks to my wife Stefanie, who was Peter's makeup artist. You rock baby!