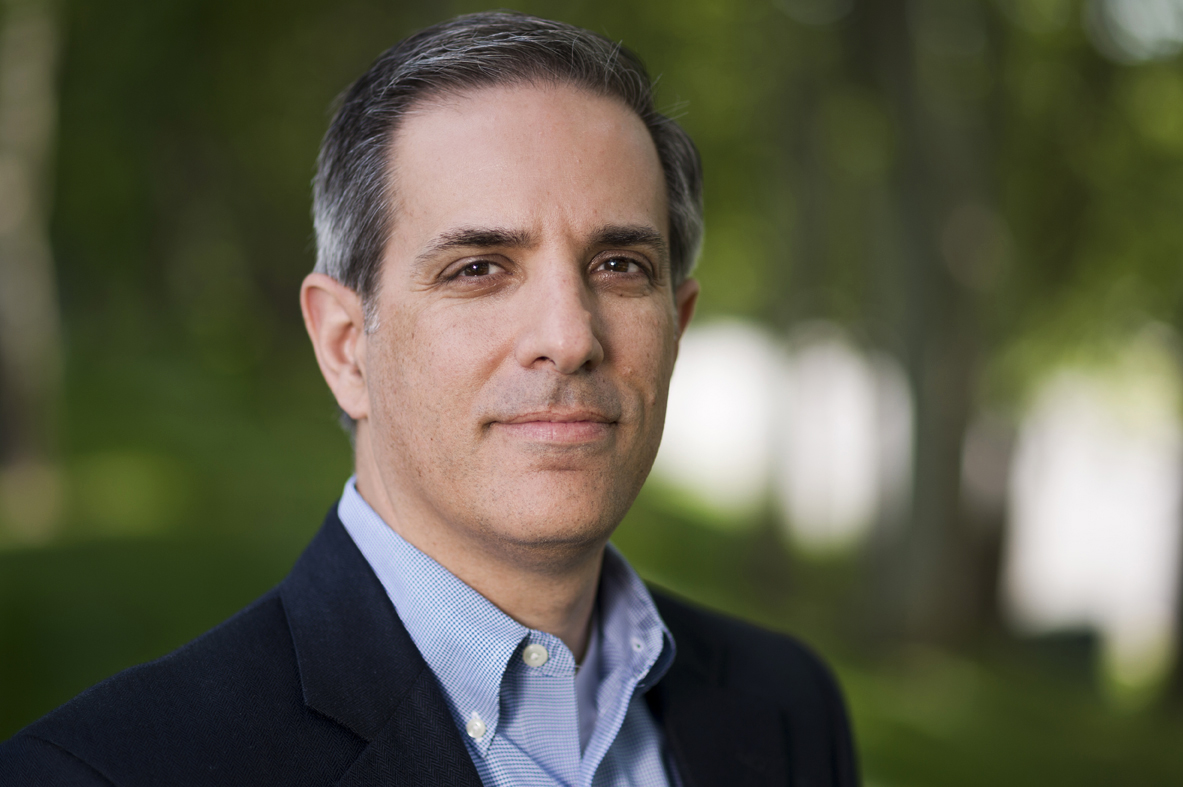 As usual, I'll probably be a bit scatterbrained throughout this post. Bear with me (or is it bare with me?).

It was a corporate shoot; big pharma and I have to admit, the butterflies in my belly seemed to have hit a dose or two of some high quality Shaboo.


[Due to the licensing and agreements, company and employee names will not be disclosed]

The email arrived about two weeks ago. Jane Doe had informed me of their team's interest in a shoot for their company's marketing materials.

We communicated over the following days to discuss ideas and timelines.

Upon the agreed dates, it was time for preparation.

Pack as light as possible or throw in the kitchen sink?

24 hours prior to the shoot, I had the day to scout the location. There were to be some interactive inner office scenes and outdoor headshots. The inside was just like any other in the country, fluorescent lights and 10 foot ceilings. Not the environment photographers often dream of unless they are into the whole S&M lifestyle.

Ultimately, I decided to go with the kitchen sink.

The studio hadn't been so empty since the day the wife and I moved in.

The Xterra was a sea of black polyester; piles of light modifiers and gear bags. It was a thing of beauty.

At 6:30 a.m., my assistant for the day and fellow photographer, Gregory Brown, was already knocking at my door. I admire his punctuality. Unfortunately, I couldn't admire the trait for another 30 minutes as I was still cozy under my blankets, dreaming of Profoto packs and Broncolor Paras.

We were on the road by about 7:30 a.m. First stop was for breakfast. I'm no consumer of fast foods but on shoot days I like to enjoy some comfort food on the way to the location. The breakfast of choice is always the same, a large black coffee and a sausage, egg and cheese on an everything bagel. My wife would kill me if she knew as she likes to feed me kale and spinach smoothies. Yummers.

By 9:30 the conference room looked like a atomic gear bomb had exploded. Lightstands, umbrellas, tripods, batteries and gels strewn across the floor. There was no doubt in my mind that some piece of gear would be lost on that shoot.

We worked right through the indoor stuff as planned, shuttling in one executive after another, putting them into various posed candid scenarios.

The clock wouldn't slow down, not even for a second. Before I knew it, it was nearing noon. Holy crap time flies when your having fun.

Mind you, it's three days before the summer solstice. The sun was high and not a cloud in the sky. Shadows would be harsh, squints would be scratching at the door. Funny thing? I was pumped. Bring on the abhorrent conditions mother nature! Fear, move your pathetic ass out of the way.

I found a stretch of land at the end of the parking lot. Rows of trees about 100 yards in length. The beautifully manicured grass was shaded by the canopy of leaves.

My friends, the Westcott 40" 5-in1 reflector kit was calling. My adrenaline was spiked.

I've mentioned [here] how through my photo career have skipped the reflector phase, jumping straight from ambient only to strobes. 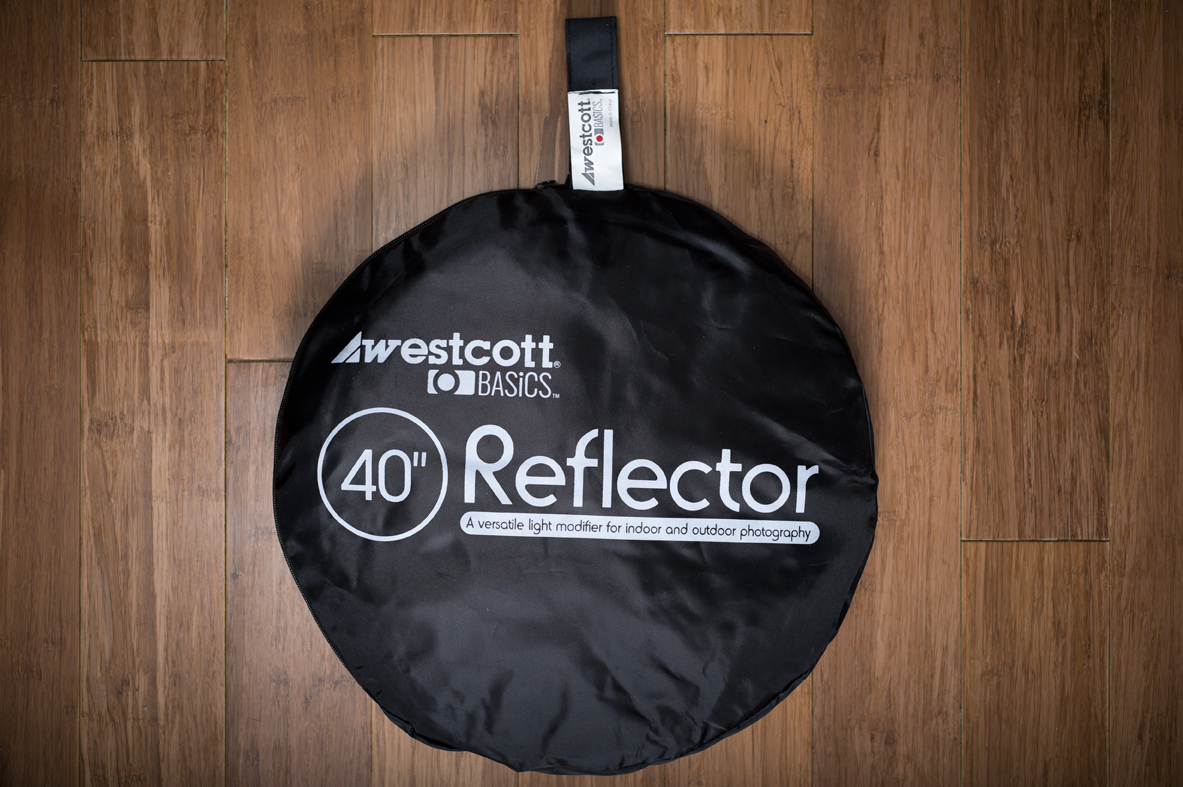 This big shoot would be my big baller move, working the reflector for the first time professionally on this big biotech shoot. Crazy? Look people, it's the only way to get ahead in the very tough world of advertising photography. Go balls out!

Now look, don't get me wrong, it's not like I don't understand light and how to shape and modify it's properties. Quite the opposite. Working the reflector wouldn't be a ginormous gamble. The only thing that I had concerns about was exposure variances. You see, when working strobes, the exposure can, for the most part, be more easily controlled. With ambient/reflectors, the environment can trick out your camera's metering system from frame to frame. At 1/1250, f/1.8 and ISO 50 this frame was great but at the click of a shutter and gust of wind towards the leaves overhead and your outcome may be very different.

How did I control these variables. Oh boy. I'm anticipating screams from across the globe.

I took the camera out of full manual mode and shifted to an aperture priority setting. Before you drag me to the gallows let me plead my case.

Let's say I was working my normal strobe routine. I would have knocked the background down a couple of stops, threw the strobe in a brolly at 1/4 power and banged away at 1/250 at ISO 50. First of all, it was way too bright to get f/1.8 without an ND filter. No biggie. The only real headache would be that background would be drastically changing from frame to frame. The fix would be to adjust exposure from frame to frame, wasting precious seconds. Remember, time was not on my side.

Working in aperture priority and with a reflector I could let Betsy (Nikon D4) use her brain to assist me in getting fairly close exposures through every frame while locking in at f/1.8 and ISO 50 -2/3 EV.

Before bringing in the subjects, I gave Greg some quick pointers of how I wanted to utilize the 5-in-1.

First, I wanted to use the more reflective, silver side of the 40 inch modifier. the soft white, in my opinion, well, would have been less efficient. Here's the deal, I wanted to keep the background somewhat on the underexposed side. While shooting, the subject and I were under the trees, completely shaded. To light the subject(s) I had to have Greg blast them with a nice beam of light. 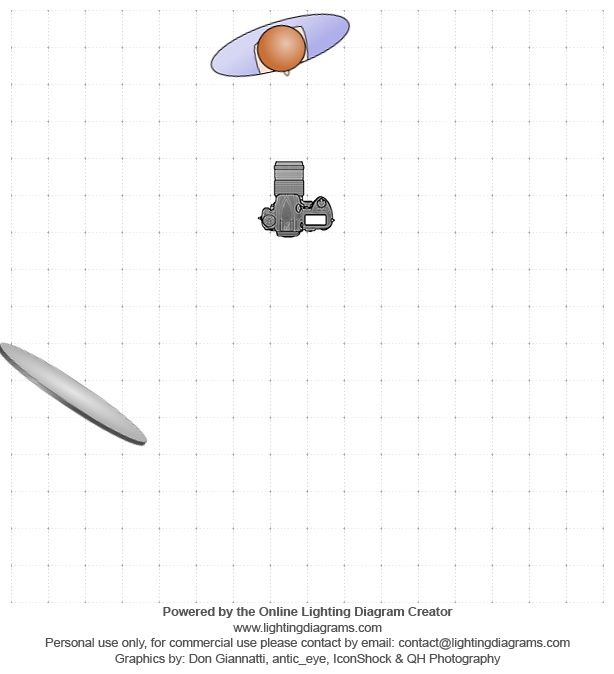 As for Greg? He was about 10 feet behind my shooting position, about 15 or more in front of the subject. Why? The leaves. Again, we were canopied and in complete shade, directly under the sun.

I needed the reflector to work out in the open, where there were no trees.

Before I go further, check out the catch lights in the subject's eyes. Yes the are pretty but do you notice their position? Up high aren't they? At the top of his pupil.

I see so many photographers holding the reflectors below the subject's face, firing the light upwards. I think that's great if it is used as a fill or second light source but if working as the key in a headshot session? Eh, I'm not getting it.

Throwing the low reflector from below will yield catchlights in the lower pupil. If shooting one key I prefer the catchlight up high. A low catchlight is nice if is a second source of light or fill or if you are going for a specific effect. I felt the corporate headshot should have had the natural feeling upper pupil catch.

Just how high was the Westcott? On this gusty day, I had Greg hold it high and over his head. Shit man, he totally wanted to smash that thing over my melon as holding it in the high winds proved to be very challenging for my good friend.

Talk about tough work, I had to keep a sharp eye on the subject's face not only to wait and see when their hair was slowing in the wind but when the narrow blast of light would land perfectly as Greg tried to stabilize the mod.

Working with strobes was totally an option and they were charged and ready to go but I really wanted to put the Westcott to the test and you know what? I give five stars. Such a simple modifier but surprisingly powerful. Sounds kooky I know but I'm telling you, for about 50 bucks, it's a mod that every pro and enthusiast alike should have in their pack.

Exiting the comfort zone helped me get the most creativity out of this shoot for sure.

Oh, that buttery bokeh? Yeah, sometimes gear really does matter because my friends you just cannot get that gooey goodness with a kit lens. If you don't know what the hell I'm talking about, it's the super duper shallow depth of field. See the trees? Of course you don't because they are beautiful blurry mess. That's the buttery bokeh that I was able to produce shooting wide open on the Nikon 85mm f/1.8G, hands down, my go to headshot glass.

Careful though my peeps, locking focus on the eyeballs at 1.8 can prove to be, at times, difficult. Be sure to punch focus when chimping or you will not be able to see if you have locked the eyeball or not.

Finally, I want to thank the truly awesome team at T***e** Inc. You guys were amazing.