photographic success :: run the marathon, not the sprint 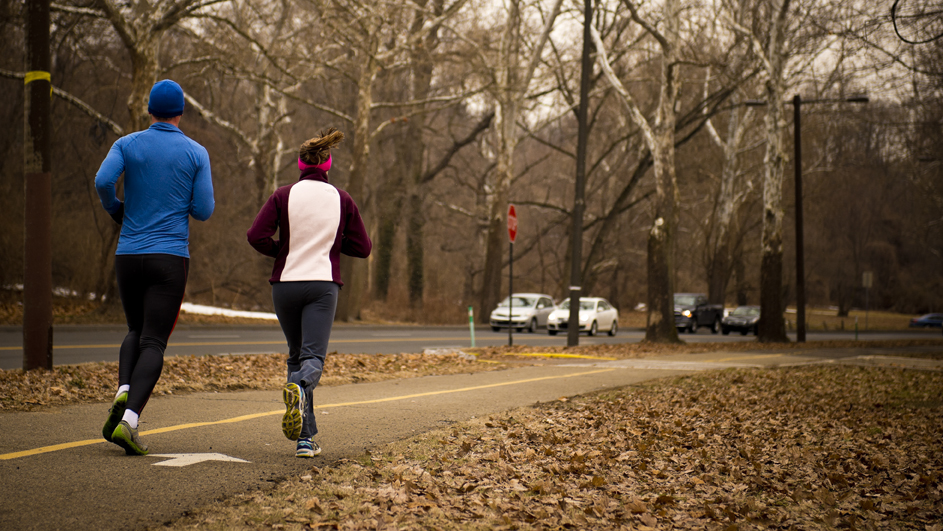 "You call yourself a photographer just because you own a DSLR? I own a pen. I'm an author."

Fact of the matter? This quote is all too true in today's image driven, short attention spanned, noisy social society.

But that's OK. I embrace their willingness to enter such a challenging artistic discipline.

Look peeps, I didn't exit my mother's womb holding a Nikon D4, I was naked, probably crying and covered in a whole lotta funky fluid. At one point or another, me, you, Ansel Adams or Henri Cartier-Bresson all had to pick up a camera for the first time.

This is wherein lies the big ugly truth.

Today, the barrier to entry, in the world of creativity, has never been so low. But the sheer masses upon masses of people trying to enter are causing a bottleneck traffic jam if you will.

This is what separates the men from the boys.

Do you have what it takes?

I can't tell you how many people, friends and family, that I know very well, all who have bought a DSLR and a week later, thought they would be shooting the next cover of Vogue along side of Annie.

You know what? So did I.

To succeed in the super highly competitive world of photography (stills and motion) you need to run the marathon, not the sprint.

Here's a great quote, said by Robert Duvall to Sean Penn, in the 1988 film Colors ::


There's two bulls standing on top of a mountain. The younger one says to the older one: "Hey pop, let's say we run down there and fuck one of them cows." The older one says: "No son. Let's walk down and fuck 'em all."

Excuse the explicit wordage but I want to get my point across.

I remember learning the exposure triangle. I recall having my first paid gig. It was for a Olde City Philadelphia Flower shop. I was so excited. the photos? Horrible. I mean bad bad. Am I being a rough critic on myself? HELL NO! I am embarrassed to even look at or admit ownership to those horrid creations. So freaking bad, I won't even post the shops name.

I tried everything I could, every Photoshop trick I knew, to save those photos somehow. The result, I delivered an even shittier product than I started with. I don't even think I was shooting RAW back then, nor did I know why anyone would want to shoot in RAW mode since it allows so many less images to be created. I was so naive.

What did I do?

Today, while others sadly come and go, only to leave their expensive gear in a closet somewhere to collect dust, I, with my camera, continue to battle up the hill.

Instagram will fade away, as will the horrible, overused filters that have come with it. And you know what? Something else will come along to lure in the masses. As a photographer? What to do?

[The creation of the posted photograph is a great metaphor for today's lesson. Read on.]

Yesterday, I took a ride down to Boathouse Row, specifically, West River Drive along the Schuykill River. I packed with me ::

I wore a pair of sweat pants, hoodie, winter coat and snow boots. It was cold. A wintery mix was in the very near future.

While most would lean towards the indoors, I opted to endure the weather.

Upon my arrival, I noticed first that there were more runners on the other side of the river. Eh, no worries.

I lugged my gear and my piping hot coffee along West River Drive until I could find a spot that would work as a cool back and foreground. I wasn't in the mood for the cliche boathouses, as everyone would expect to see. I mean, I wouldn't say cliche so much as I would territorial. I really just wanted to keep the setting neutral, generic, if you will. An everywhere and anywhere USA type of shot.

I landed on what I thought would be a good spot. Think of a circle and my placement being on the edge of the ring. Looking either left or right was the road curving, sort of wrapping around my location. I could plant my sticks and pan left or right, to find the runners I wanted to capture.

The angle? Low. I kept the legs to the Feisol closed down and spread out. If I had to guess, Betsy was perched merely a foot or so above the leafy, muddy turf.

[To all the haters :: The lens hood came to my rescue at that very moment. Betsy took a face first dive into the rough, wet grounds. Her hood took the hit, planting her face first in the mud, the front element far from being touched. Score!]

After repositioning, I took a knee. And then I took two. I sipped my now chilled black cup of coffee. I tweaked some exposure settings. The dismal day was getting me f/2.8 at 1/1000 and 800, plus or minus 1/3 stop or so. Pretty close. ISO 800?! Outside?! Midday?! All day long baby. I really wanted to alternate between a super fast shutter to freeze motion and dragging the shutter a bit to capture some motion blur. I wanted either around a 1/2 or a 1/1000 second shutter speed, pretty extreme, I know.

I think I was working an auto White Balance. Crazy? Not really. When shooting in an ambient environment and shooting RAW, I feel that Betsy's auto WB is pretty sexy. Shooting strobes, on the other hand, gels and such, dialing in from jump street is a priority.

And then I sipped some more cold coffee.

Quick, take position. Take aim! Focus. Shit!! What focus priority am I using. No time! Shit! Switch to continuous high. Need to motor drive this dude at 11 fps or am I at 10? Damnit! Focus Michael, Focus. Yes, the camera and your brain. 50 yards and closing.

At this point I throw an elbow to the dirt to get my big melon low enough to look through the viewfinder.

Five seconds later and he was gone. The wind picking up as I begin to see droplets of water land all over Betsy's big beautiful body. She's a tough gal, I wasn't worried one bit for her well being. Betsy's been thrown much more severe and dangerous elements. A drizzle? Puleeeze.

As I saw runner dude disappear around the turn to my right, I looked to my left.

And then I took a sip of cold coffee.

I picked myself up from the ground, wiped some leaves off of my now wet, muddy ass.

I shook out my legs a bit as the position I arose from just wasn't forgiving.

And then? My coffee was empty.

The marathon, not the sprint. 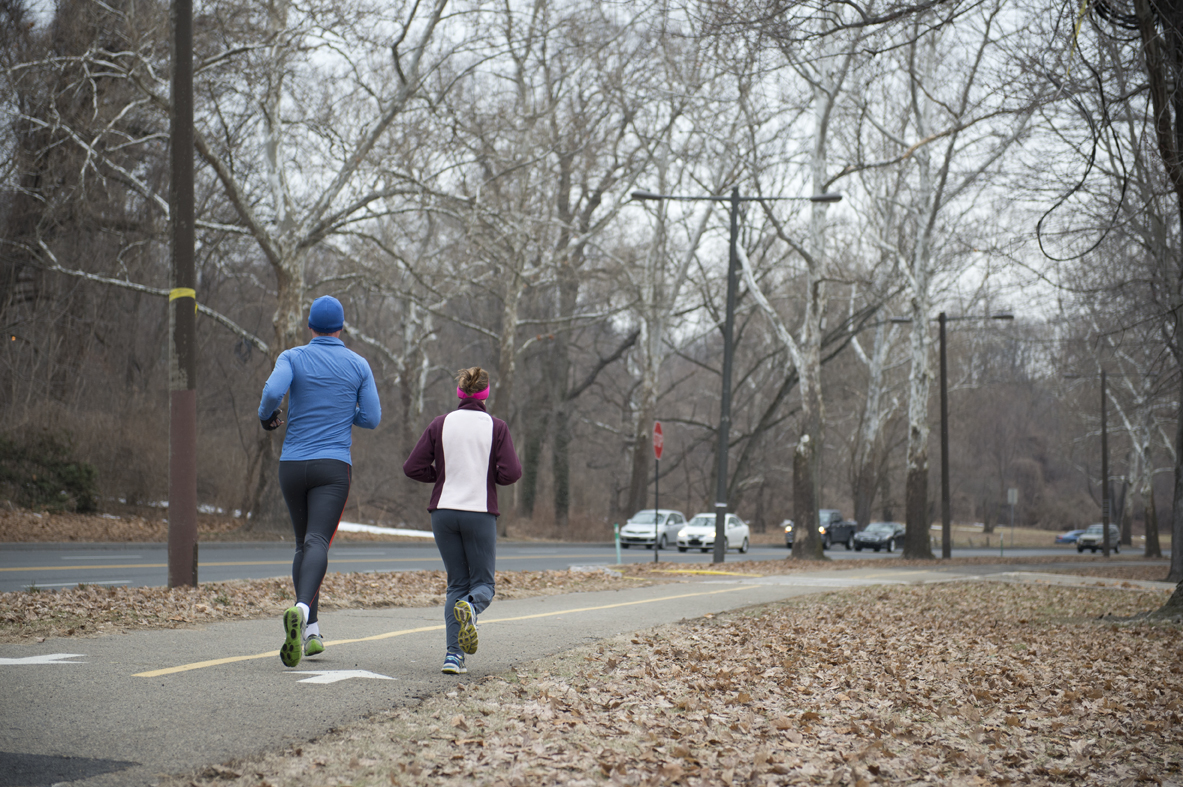 Before we wrap it up for today, I'd like to get down with my post shoot workflow. Take a look at this second image. This was shot during the motor driving of the entire series of these two particular runners. This frame is exactly one frame after the post edited, opening photograph. Basically, these shots were taken about 1/10th of a second apart. Not a whole lot of time for any drastic ambient lighting changes. The Kelvin temperature for the original? About 4700 degrees.

Along with the unappealing WB, the entire image just felt a bit. . . . flat. TLC was in order. Don't get me wrong, this is pretty much what the scene looked like but, nah, I didn't like it. It was either go super cool or to warm it up a bit. I, obviously, went warm. In fact, I took the edit past the normal 5000K and way up to the cloudy 6500 range. That's a McNally trick that I pull out from time to time.

Below left is a screenshot of the unedited, as is, exposure adjust panel in ACR. To the right are my final ACR decisions. Quite extreme if you ask me. And that histogram? Don't even ask. Sometimes you just gotta go with your gut. 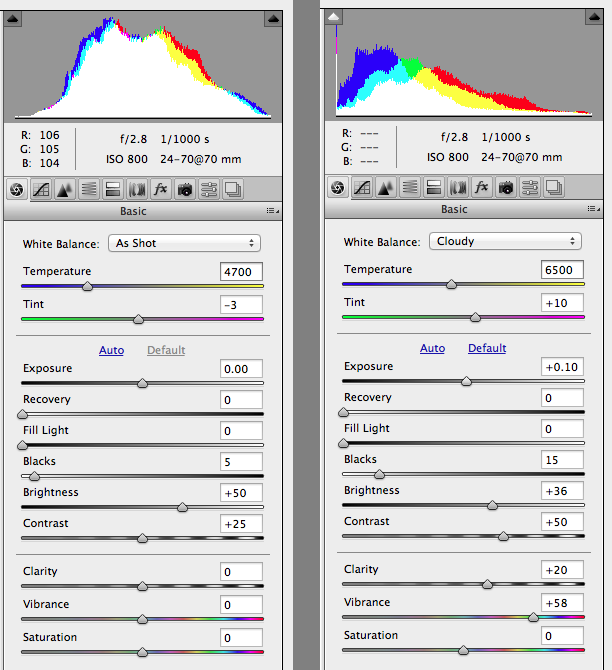 Although the histogram would land me in big trouble with the pixel peeper police, I often only use as as minimal guide to what get what I'm looking for. What I do depend on the histogram for is to see if my shadows or highlights are clipping (Blown The Eff Out). Amazingly, take a look at how heavily I pumped the blacks, 15! 15 and still not clipped! Who's your daddy!?

Yeah, bottom line? The photograph doesn't always have to look like the scene as it was live. You are the photographer. Roll how you want to roll. Creatively speaking that is.

Speaking of editing. Take a look at my 16:9 crop ratio. Typically used more for film, I went with this aspect ratio to help compliment the leading lines of the lined path on which the athletes are running.