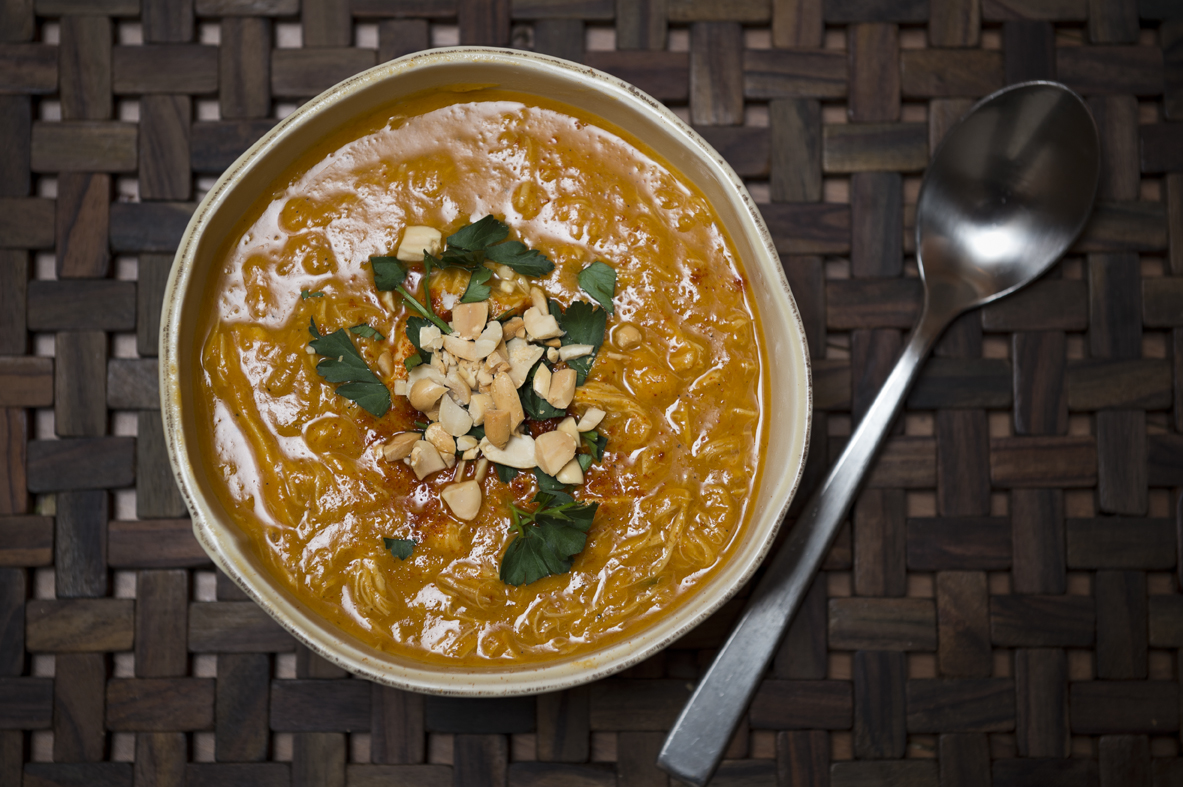 The days of eating your mom's chicken soup are, simply put, dead, defunct, donesky. We are now living in a time where food is taken to new and exciting plateaus, until the next culinary creative decides to take to new heights. Gastro pubs, corner cafes and even the local dives, are all stepping up their games, as they should because everyone of them is vulnerable as the next brilliant culinary mind could be opening shop just around the corner.

I love to explore the fantastic comestible creations, not only with my belly, but with my lights (and a camera of course).

Where I grew up, in South Philly, those are fightin' words. In a neighborhood predominantly lived in by Italian descendants, dinner is cooked with much pride. Sunday Gravy, pastini soup and chicken cutlets would be staples of any South Philly dinner table; past present and future.

Don't get me wrong, the food is good, delicious in fact. Sunday Gravy is something that, to this day, I appreciate greatly. Pastini? Love it. A perfectly cooked, nice and thin, chicken cutlet, topped with some sharp provolone and broccoli rabe? Heaven.

That shit gets old people!!! Wether you grew up in an Italian, Polish, Irish, German or whatever household, you surely eat lots of your families traditional fares. A lot. Too effing much, IMHO.

It's like listening to your new favorite song, over and over and over again, until the sound of said song makes your ears bleed. It's the same concept only with different senses being tortured.

Living in a city, such as the great city of Philadelphia, offers to us, countless new and exciting eateries. New and exciting, refreshing even, flavors and ingredients, introduced to our palates.

Your new culinary explorations don't have to stop there. You do not have to be forced to eat these awesome dishes at a restaurant. Here's a shocking revelation ::

YOU CAN COOK THIS FOOD AT HOME!

Before you go running back to your aunt's linoleum kitchen floors, stop and hear me out.

Ok, some dishes, I would agree, take the skill and knowledge of a seasoned (no pun intended) chef. For instance, if a recipe calls for a roux or beurre monte, you probably don't have a freaking clue of what that means. If you are asked to use one of the five mother sauces, let me tell ya', ketchup is NOT one of them. So yes, agreed, there is lots of skill, talent and knowledge involved in cooking some meals but some are very possible. You know how?

Find a crazy, new and unique recipe, in a book or online and FOLLOW THE DIRECTIONS.

Your first or tenth time may suck but as with anything, practice, practice, practice. I would still bet to say that your first, shitty attempt at a new dish is probably more exciting to your tongue than is your uncle's dry-as-the-Mojave holiday turkey. Just sayin'.

On The Other Hand

Maybe I'm just a lucky dude. My wife loves to cook. I thank her for my ever expanding waistline. Kidding of course.

Fact of the matter is, like my photography, Stefanie isn't afraid to take risks in the kitchen. It's an adage that all creatives must adhere to :: No risk, no reward.

Unless my wife, or myself were adopted, I'm pretty sure our parents are not African. Further, neither of us grew up eating African food, unless the San Francisco treat is actually named after a city in Kenya, which I highly doubt.

Rather, Stefanie, as she usually does, took a culinary risk. Not only is it a chance for her to create something new and delicious, it's a chance for me to work on my food photography technique.

You see, often, her cooking and my photography are a collaboration.

Let's Get Down To Brass Tacks 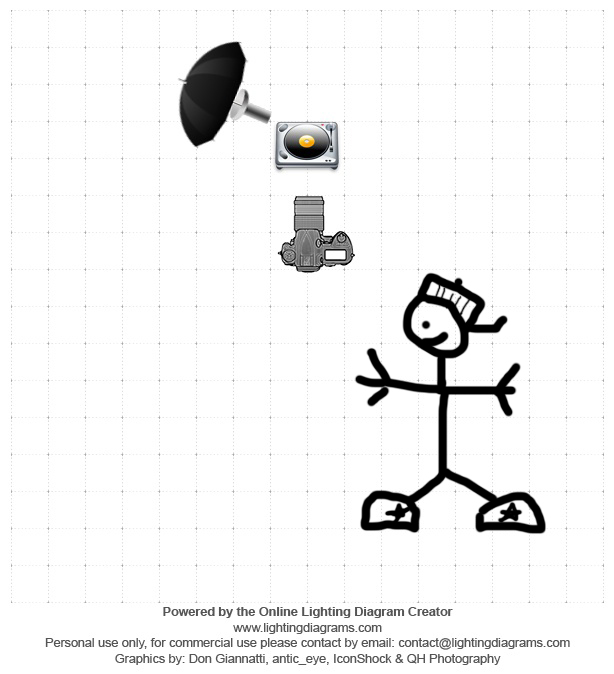 My lighting diagrams are created via The Online Lighting Diagram Creator. The tool is super useful, super awesome.

There you will find just about every type of lighting mod and some props to use as well. Unfortunately, a bowl of soup is not one of these props so I had to use the record atop a turntable instead.

I decided to work a one light setup. Hey, these days, I like to roll with the less is more gang. I find that if not swimming in gear, I am able to focus more on the creative task at hand, this being the photograph. Don't be confused though, there are times when pulling out the gaggle of lights is a total necessity. But when I can work light, I do.

You'll also notice, that not only did I decide to work light, but I also went with working efficiently. When I talk efficiency, I'm sometimes referring to setup time and how to keep it to minimum.

Rather than take time to set up a sometimes awkward softbox, I opted for a 45 inch Calumet convertible umbrella.

Put yourself in my shoes.

Looking around my new Fishtown digs, I notice a lot of textures that I would like to work food, people or product into. On this particular shoot, I was drawn to the new bamboo floors. I don't know. Something about bamboo and African soup had me needing to marry the two together.

I searched for something to place the bowl on, which I would then place on the bamboo floor. I shit you not, the gourmet placemat under the African Peanut Soup is actually our bamboo kitchen floor mat. Improvise my peeps. Get creative. I was looking at the floor and saw my wife, rinsing a pot, while standing on this perfect floor mat.

Now, back to working efficiently. Are you still in my shoes? Good. Don't leave yet.

Imagine this shoot, a fresh, steaming hot bowl of meat filled soup, fresh herbs and spices, on the floor and a crazy, always hungry pit-bull (Bruno) just hovering by. Recipe for disaster? You bet!

This was a test-my-skills moment, for sure. A softbox would have totally made the soup more susceptible to Bruno's wrath. Think about it. If I had to adjust the strobe in my 28 inch Westcott Apollo, I would have had to remove the front diffusion to gain access to the strobe and when finished, reattach the diffusion panel. 90 seconds sound fair? 90 seconds is a freaking eternity. The brolly was the obvious choice. If needed to adjust power ratios? I could change a 285HV blindfolded in under five seconds.

No joke, I think I nailed this one in under ten frames. A few light and a few spoon adjusts and BAM. You can have your hammer back because I nailed it!

Hey, if you've been around recently, you are probably aware that I'm a big believer in getting it right in camera and keeping post production to a minimum. It's just my style. There's no right or wrong in that discussion, just the way I prefer to work.

I did pump some post production magic into this photo.

The contrast between the bowl, soup and bamboo mat, well, they just weren't enough for my taste. I decided to hit a vignette, focused around the bowl, darkening the bamboo ever so slightly. So slightly that the manipulation does not call attention to itself in any way but certainly making the bowl of soup POP.

I know you curious culinary creators are waiting on the recipe. Here you go . . . .

Find a recipe that makes your mouth water.

And for Christ's sake, don't slip on that linoleum! LMAO.