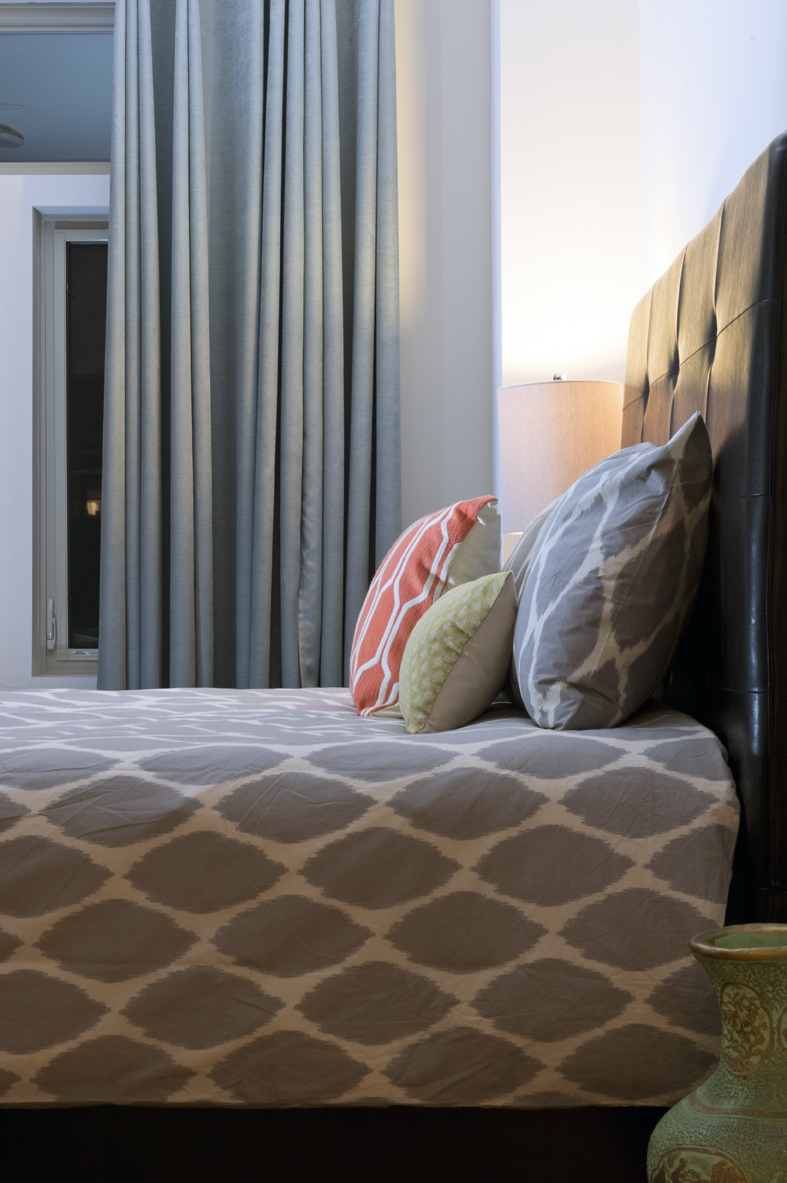 Chances are, you haven't seen much of my real estate photography. The reason being? I don't really do much of it. Ever.

In the highly competitive world of photography, we, as artists, tend to find one or two niche areas which to work in.

Personally, I have developed an affinity towards shooting people and food, the two things I love the most.

Now, this is not to say I haven't worked outside my scope of practice. Beyond the headshot, environmental portrait or commercial food photography, I've been known to explore to some extent, the world of landscape, product and as I am sharing with you today, a real estate/interior/furniture, hell, I'm so immersed in my other work that I don't even know how to officially label this type of work. Likely, all of the above would suffice.

Bottom line? Call it taboo in this line of work but I would be as bold as to say I'm a generalist.

Look my homies, across the board, all photographic principles are the same. An f-stop is an f-stop. The rule of thirds is the rule of thirds. Composition to light, shutter to strobes, the shit's all relative. It's the attack that's different.

Each discipline, be it food or people, real estate or landscape has their own special techniques or pieces of gear that these specialists hold dear to their hearts.

I'm no camera-smith in the world of interior design by any means but with a developed eye for deconstructing or reverse engineering a photograph, there are a number of variables I can deduce by examining a photograph in say, I don't know, a Restoration Hardware catalog (I love that effing store).

The big notice. And please, my friends, let's get interactive. Before we continue, run to your nearest bathroom and find the catalogs, yes, in the place where you likely read them most. Hey, I just call it like I see it. Call me gross but I'm sure that 95% of the people reading are smiling in guilt. I'm just as guilty. My bathrooms have hidden stashes of B&H catalogs and old editions of Pro Photo Magazine.

Take a look at your furniture catalog and you will notice a similarity. Sure, some compositional styles may differ dependent upon each photographic style but what holds true across the board, 99.9% of the time, the light.

The light is ALWAYS, big, enormous, beautiful, shadowless and in many ways, perfect. Trust me, I've drooled at many an RH catalog and said, "holy crap!" My reverse engineering skills are put to the test. I mean jeez, they gotta be using a dozen Arri 12K Arrisun heads, working at f/70.71, ISO 12.5 at a modest 1/250. I mean, right?! Oh, almost forgot, each of those 12 Arri heads are pumping their nuclear particles and waves into some custom built Bron Para 700s. NASA has also provided some top secret, unknown, translucent material, that alters the speed and properties of light, slowing it to a gentle 65 miles per hour as it perfectly aligns itself with the universe and then blankets the entire set in photographic perfection.

Actually, they use the same gear as you and I. It's all in the attack, the technique.

Well, my friends, I decided to crush their technique. It may be clean and perfect but shit, it's so friggin' sterile. I mean, where's the character!?

West Elm Would Be Hiring A Hit Man Right Now

As you may or may not know, Bruno, the wife and myself had recently moved. Transplanting from Rittenhouse to Fishtown was an awesome decision. This neighborhood is exploding with artists, cafes, bars and wonderful food. It's home.

It's common knowledge that when you move into a new home, you gotta spend lots of money on new stuff. Vague statement? You bet but everyone of you know what I mean.

As each room in our new digs is slowly developed, one by one, the house is slowly but surely becoming a home.

Last week, Stefanie, my wife, decided we needed new "stuff" for our bed. You know, lots and lots of decorative pillows, big decorative pillows the ones you aren't allowed to sleep on. New sheets and most importantly a new duvet cover was "needed." Hey, I'm understanding of a woman's needs. We agreed upon a style and in seconds she was in her Mini Cooper and on her way to West Elm. Why no internet order? She needed that shit NOW, not tomorrow but NOW. Understood.

There weren't any intentions to shoot the new bedspread until one day following the redesign. I was on my way to the master's en suite when, walking down the hall, when my photographic eye took a different look at the new room. I saw the need for creation.

Although I believe I was on my way to browse the latest B&H, those attentions were diverted. Instead, I ran for the gear, not leaving any chance that this spark of creativity would exit my brain.

Without getting too gear oriented, I'll break it down rather quickly.

This was a total run and gun shoot.  Lens choice? The one that was already on the camera. Done. What to mod the strobes with? The big white ceiling in the bedroom. Bounce baby bounce. Not often do I use a set of sticks but when they are needed, the tripod is a priceless tool which is why I invested in the best, Feisol.

Let me first take you through the ambient environment, sans the photography.

It was evening. The giant bedroom windows were, well, dark. The room is filled with high hats and one lamp on the far side of the bed. I didn't want the high hats to play any role in the photograph but did think that the lamp could play a starring role.

Flash would have to do some heavy lifting to pull this off in an acceptable manner. 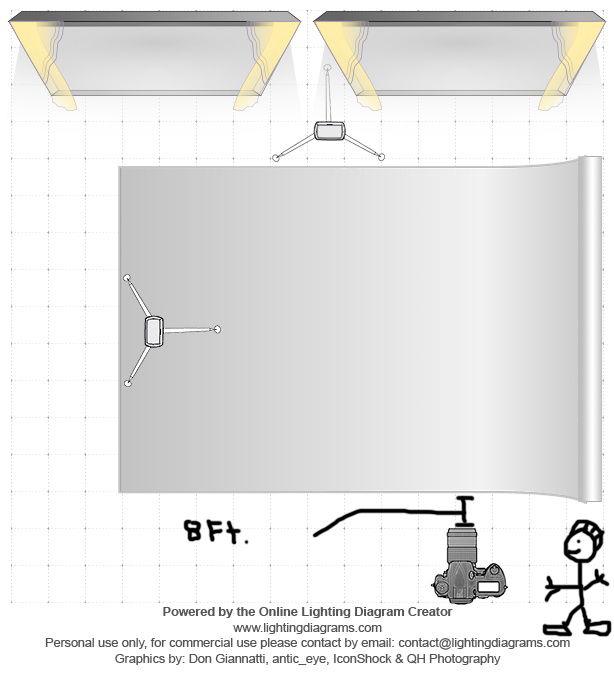 As mentioned, due to the run and gun nature of the shoot, I went with a couple bare speed lights that I would bounce into the ceiling, producing a big soft apparent light source. I threw one head on the bed and another on the floor, far side of the bed, both aimed upwards.

Getting the exposure looking the way I wanted it to was a total balancing act. Like a meth head, I was tweaking out.

Actually, it was Betsy (D4) who was being tweaked. I first dialed in an ambient setting, finding a sweet spot level of light that I wanted from the table lamp. Now, I also have to keep in mind that with a photograph like this, you generally want a very wide DOF. Don't think buttery bokeh and real estate play well together.

I cranked the aperture to a lean f/22.0, the smallest the 24-70 will allow. To get some ambient I had to crank the ISO. The tricky factor here is that even though Betsy can play at just about any ISO level, ideally we want to stay as low as possible, yielding a clean, noise free file.

When working with flash, your aperture controls flash levels, shutter controls the ambient and the ISO works in controlling both levels. The physics of that for another day, just trust me on that statement.

I was back and forth a bit, working the ISO, shutter and strobe levels trying to hit that happy place, where the ambient and flash would live in harmony.

In the money making shot, the exposure looked like this :: 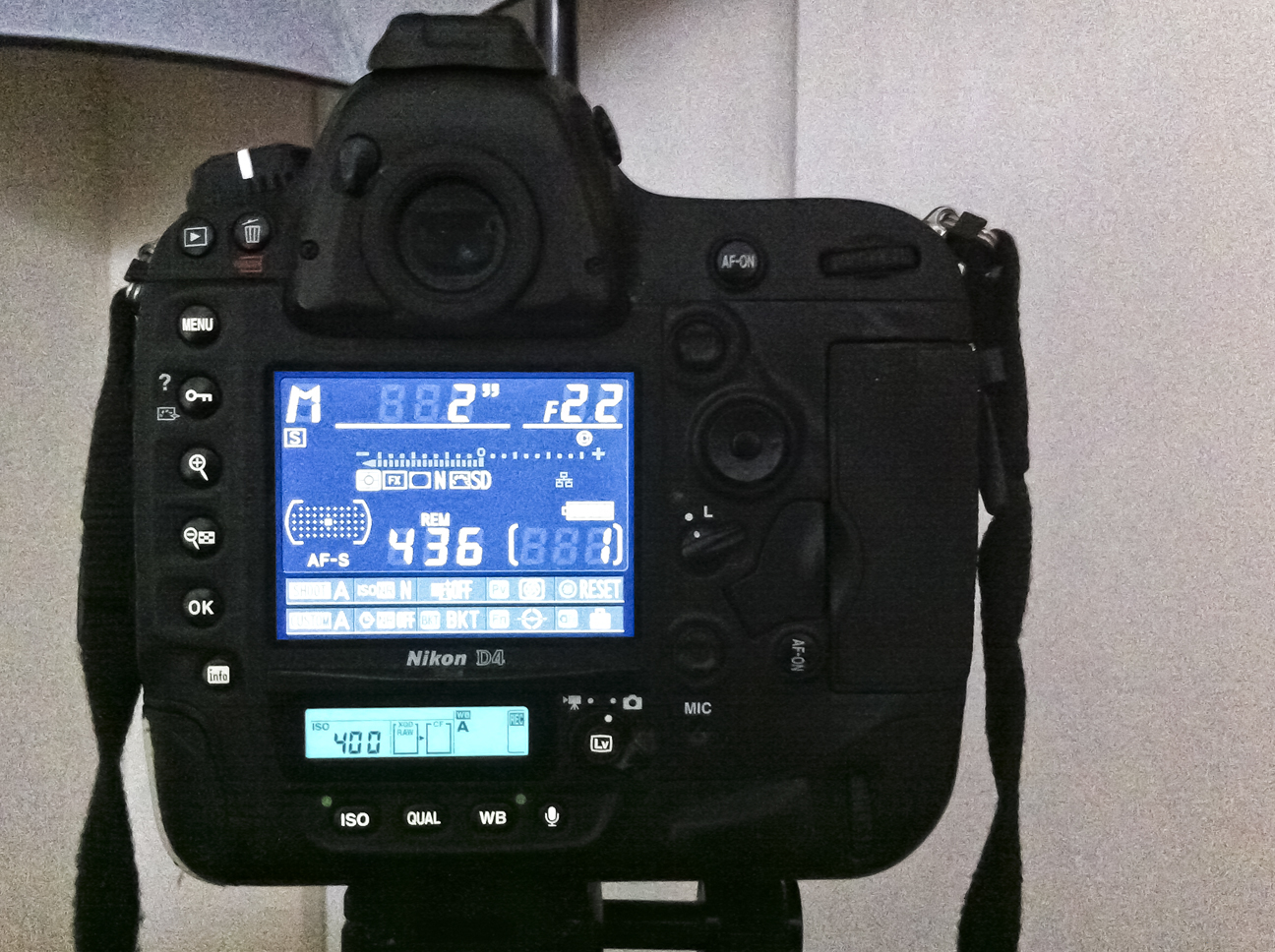 Ok, if you're not familiar with what it is you are looking at, I will explain the key factors here.

In the big glowing screen, you'll find the letter M. This means the camera is in full manual mode. to going to the right is a 2". That is a full 2 second exposure (the shutter will remain open for 2 seconds). Again, going right reach the aperture which is at f/22. Now, we will go past some of the other stuff which are more or less my personal and mechanical settings (i.e. FX mode and battery life). Going down to the auxiliary screen (I think that's what it is called, I could be wrong) you'll see the ISO is set to 400. Skipping the storage modes we come to the White Balance. WTF you say?

Look, I swear on Betsy, I swear on my PWs, I swear on it all that very very very rarely shoot in A (auto) White Balance. I swear. Most of the time, I have Betsy set to K (Kelvin), where I manually pick a temperature. Shit, I rarely even pick a setting such as Daylight or Tungsten. I swear it to you here and now. Please, keep this between you and I. I beg of you.

In my own defense, damn, I shoot RAW. That shit is totally changeable in post anyway.

Oh yeah. So, all of this adds up to what? The photograph you are seeing that is "breaking the law."

Remember I mentioned sterility, no not your reproductive capabilities but rather the clean, germ free, color free, lifelessness of a "normal" interior shot such as this. Don't get me wrong, I think they are gorgeous but as I often enjoy, I wanted to put a twist on a regular scenario. The twist in mention? The table lamp.

Working with a tungsten lamp such as this would normally "require" that I gel my strobes 1/4 or 1/2 CTO, adjust the WB accordingly to about 2850 degrees Kelvin. This would balance the light, nice and evenly. I opted for a bit of flava.

Personally, I enjoy how the lamp is splashing its wonderful hue across the room, onto the drapes and headboard, even adding a bit of rim to the pillows which I'm not allowed to sleep on.

Hey, you guys may not dig my take on the bedroom shot. I may be totally out of my mind or a total freaking genius (I vote the later). Feel free to share your opinion, be it positive or negative. I'm a big boy.

Yes, (Arnold) I may have made an abrupt turn to this section but shit, I'm beat. My finger tips have lost sensation. My eyes are crossing. It's time to wrap it up.

Quite a segue isn't it?

Overall? I'm pleased with the shot as is EXCEPT for that damn curtain!!!! It screams hello to me every time I look at this photo. I could reshoot the entire thing but really wanted to keep the discussion authentic to that evenings run and gun photographic decisions.

Now excuse me, I may need to zone out for a few while lying on my awesome new duvet cover from West Elm.