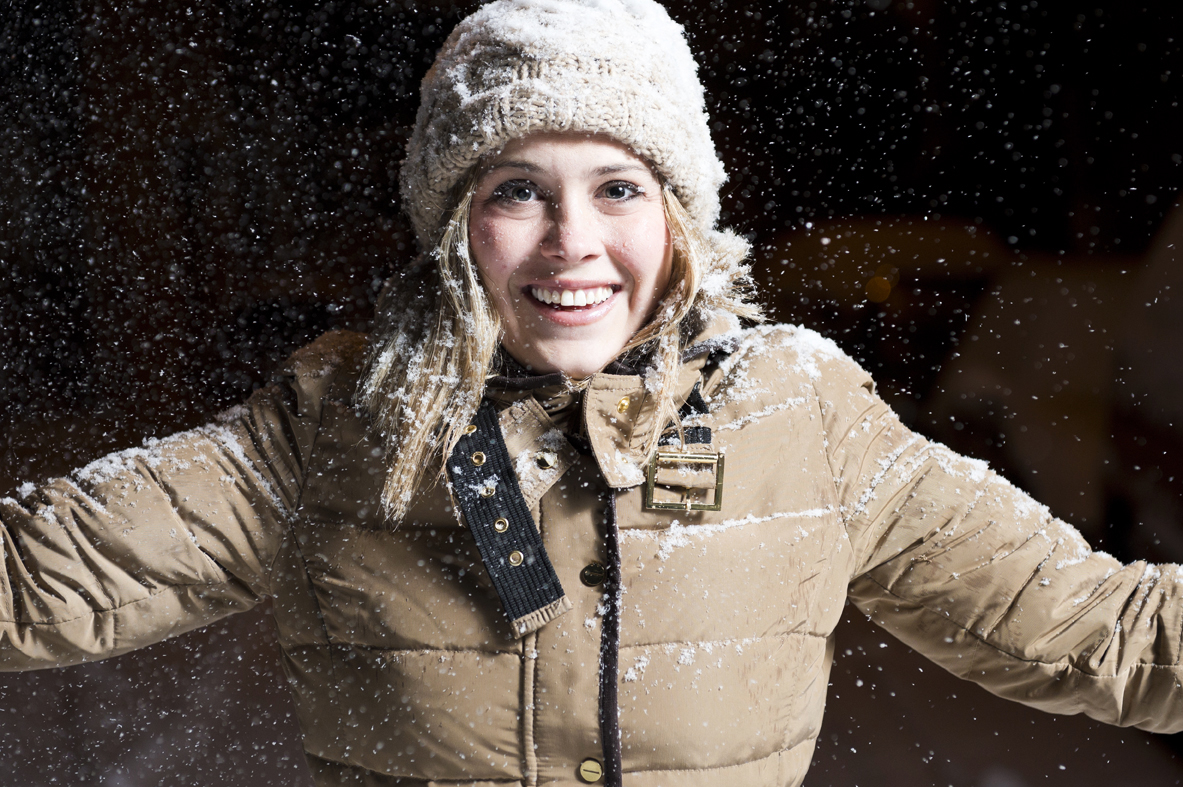 Here on the east coast of the United States, I'd say most people, at this point of the winter, are absolutely sick and tired of, what seems to be, an endless string of snowstorms. Atlanta and Pennsylvania suffered record breaking interstate pileups. Suburban city dwellers have endured downed trees and power outages all while trying to survive below freezing temperatures.

You know what? I say let it snow!

Before you decide to have me exiled from the vast land of social networks, please, I beg of you, hear my side of the story.

Maybe it's the big kid in me but I love the snow. There is positive aspect about snow that, in my opinion, outweighs all the negatives.

A Different Point Of View

As a photographer, one should view the world dissimilarly than the average Joe.

In the early 2000s, I spent some years as a bartender. Before landing that sought after, money making position, I had to earn my keep as the pub's bouncer. Owner and one of my best friends to date, Earl Zingani, would often give a pep talk before the start of a busy evening. One of his famous lines, sounding like a high school football coach, was to "keep your head on a swivel."

I suppose I apply that direction to my life as a photographer today. To elaborate, a photographer must be an observer of their surroundings. Sometimes we must create opportunity and sometimes opportunities arise when least expected. The bottom line? You gotta jump on that shit! Having a camera handy wouldn't be a bad idea either.

It had to be, oh, I don't know, the fifth or six major snowstorm of the season. The dark skies were spilling an abundance of snowflakes. I was on my way back home from shooting some commissioned urban landscapes. My toes were numb and my hat filling with the cold melting flakes, chilling my skull to the core.

As I made my way towards the front door, I thought to myself that this may be the last of the wintery weather. An impromptu photo shoot with my wife, business manager and VAL, Stefanie. It was nearing 11:00 and the snow was slowing down.

Time was certainly not on my side, as it rarely is in the world of photography.

Entering my home, I noticed Stefanie catching up on episodes of Homeland, one of our favorite programs. She was covered and cozy, lying on the couch. Cajoling her to get up, get dressed and head out into the cold would be quite the challenge.

Surprisingly, she obliged with little resistance. 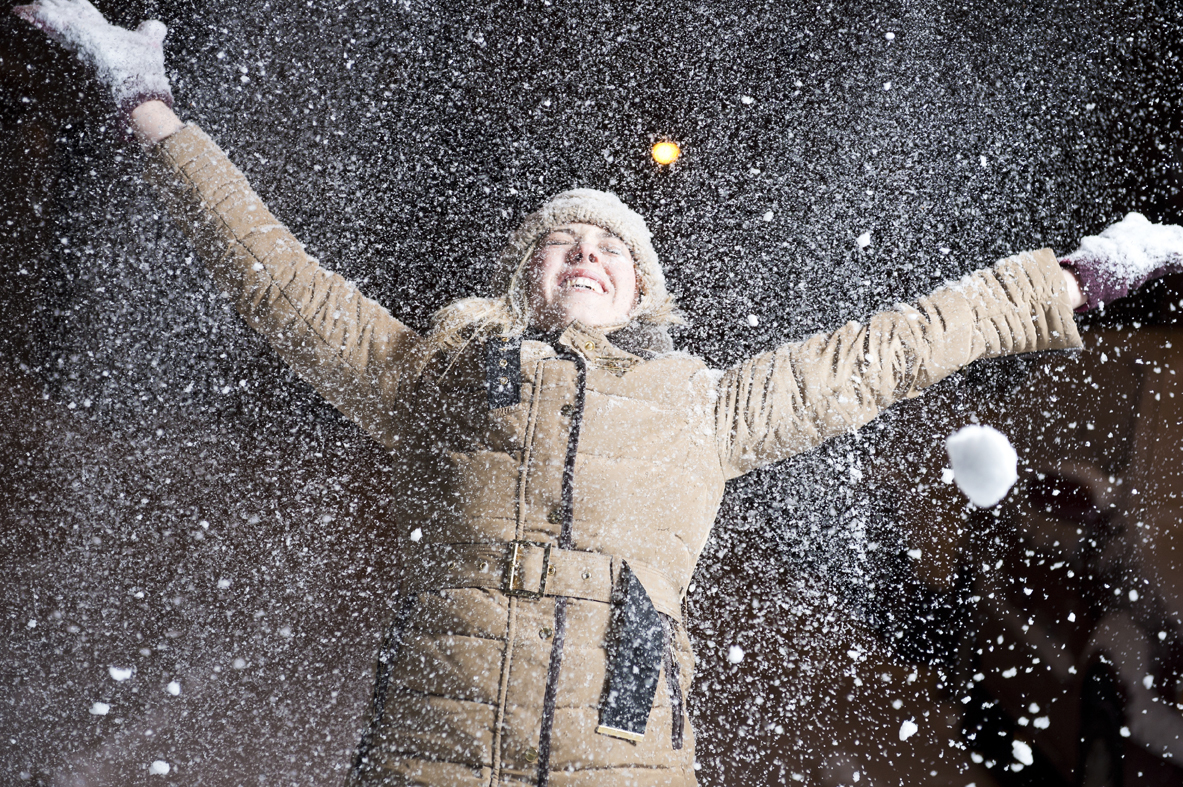 No Rest For the Weary

Working with an element such as snow, or rain for that matter, takes a bit of finesse. Can it be worked with an ambient lit environment? Sure but your exposure will be working against you, when shooting at night.

To get a properly exposed photograph, you will need to do one of the following to compensate for lack of light ::

Drag the shutter. This will surely cancel out any chances of freezing the motion of the snowflakes. On the other hand, there's something to be said for a scene with trails of snow, rather than frozen motion. For this shoot, I wanted those flakes frozen solid, no pun intended.

Crank the ISO. No problem with today's awesome sensors but on this very dark street, A very high ISO would be necessary to get a fast shutter without shooting totally wide open. f/4.0 would be a happy place to work.

Finally, given that all of your exposure setting were in a magical perfect place, I just don't feel that working the ambient gives a punchy feel as would working with strobe(s).

I decided on the later. Strobe over ambient.

The usual suspects would be used to get the job done :: Betsy, 24-70 2.8, some Pocketwizards and for this shoot, a single speedlite.

I opted to use a Calumet 45 inch convertible umbrella. Why? First of all, and the reason I gravitate towards the brolly more often these days; they are super easy and fast to setup. With the bone chilling temperatures and falling flakes, I wanted to keep it simple (K.I.S.S.). Stefanie wouldn't have been happy if I were to spend time setting up a softbox or similar mod. I had to work smart and work fast.

Going a bit further, I opted to shoot into, rather than through the brolly. Again, this would a minute or so, from taking the cover off of the Calumet. Not a long time but again, it's cold, it's late and as the old adage goes, "Happy Wife, Happy Life."

More than the time saving reasons that the umbrella choice offered, I enjoy shooting into them as I feel the resulting light is the closest thing you can get to a Broncolor Para spending about 50 bucks rather than $5,000-$10,000 (USD). Yes, the Bron Para reflectors are a BIG investment. Hmmm. $50 or $5,000? Let me think about that for a second. Yep, I'm cool with $50, all day long. And you know what? They fold up nice and neat, easily packed away in my location bags. Hey, let's see how easily you try to transport 4 giant Bron Paras. Ok, I'm just jealous.

To get a grasp on the Bron quality of light that I'm ranting about, check out the post's opener. Soft but contrasty with awesome highlights. Look at Stefaine's left (our right) cheek. It was on the verge of clipping but making it in under the gun.

As you may have noticed, light is the heavy of today's post, as well it should be. Just as important as why specific mods or cameras or lenses used to pull of this shoot, the lighting position is as, if not more, important.

I'm a big fan of breaking the rules but on this particular shoot, I went back to Lighting 101. 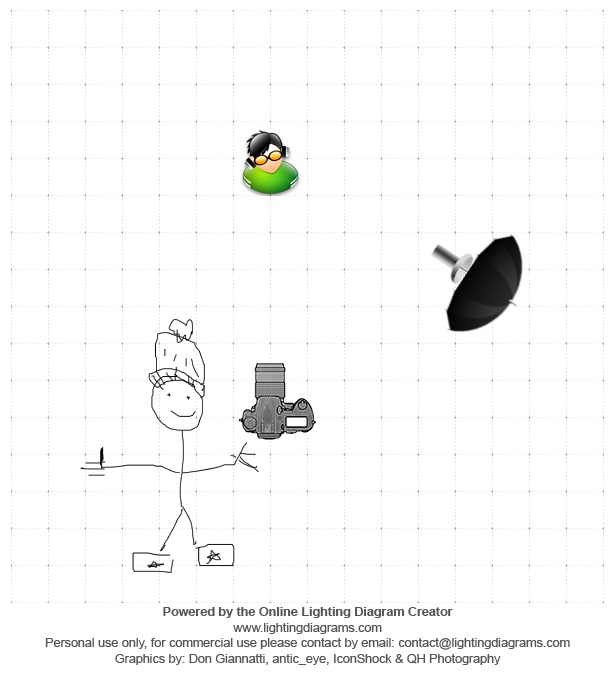 In my opinion, Rembrandt is one of the most beautiful styles of lighting. If you aren't familiar, Rembrandt lighting is named after, well, the painter. A signifier of Rembrandt light is the triangle light located under one of the subject's eyes. Refer back to that opening shot of Stefanie. Notice under her right (our left) eye, the trademark triangle is quite prominent.

To achieve this style, the strobe was placed high, camera right, at a 45 degree angle. I think I had the Calumet stand extended to about 8 feet high and it was about 10 feet away from Stefanie.

Not only is the Rembrandt lighting beautiful and flattering, it was also a conscious choice made to make the snowflakes pop.

Had this photograph been taken with direct, on camera (Betsy doesn't even have a built in flash, that should tell you something), pop up ugliness, the entire image would have looked, likely blown out to some extent. Firing on axis would have reflected the light straight back into the lens. Not good. The snow would likely be very visible, especially those flakes closest to the camera. Stefanie would have probably been undistinguishable. Think about it. Working with off camera flash, the camera is far from the light. The light only illuminating the subject and her immediate surroundings. Sweetness.

The Improv, Because There Always Is At Least One 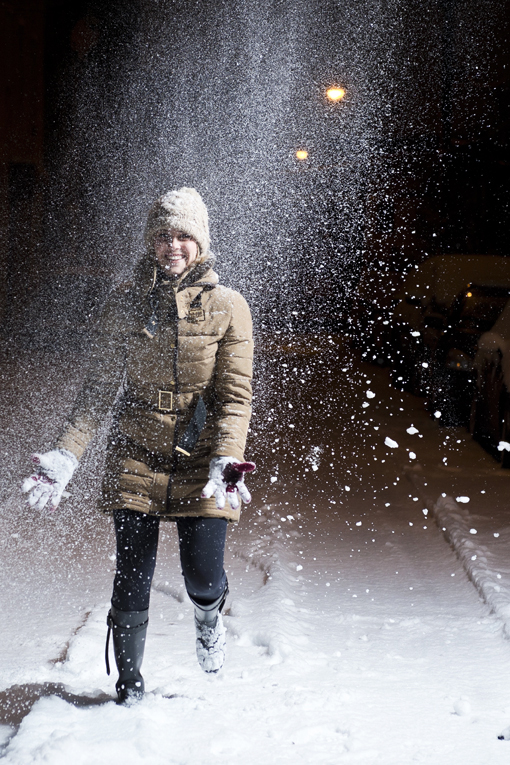 In the real world of photography, the heavy hitters like McNally or Leibovitz aren't living in a magical place where the unicorns fart rainbows and poop butterflies, as the Z man, Zack Arias would put it. Every single frame they fire isn't an instant success. It takes work. Lots of it. And with that work is needed the ability to improvise. When shit goes sideways, you better have had an alternate route planned.

Like those players, I didn't walk out into the storm, snap a frame and call it a night. The evening was a bit more complex than that.

The snow was beginning to end. I mean shit couldn't get more sideways then a snow shoot without snow, right?

There were still some flakes falling but they were few and far between. The context of the shoot about to be lost.

I had to think and think fast.

Instead of crawling home with my tail between my legs, it was time to step up my game. This is the point that separates the men from the boys. Rather than make excuses, I took action, creative action.

I directed Stefanie, basically to play in the snow. More than simply play, I had her throw the snow up in the air, as you clearly notice in this third photograph. We did this, oh, well, let me see, maybe 100 times, until being certain I had the frame I was looking for. Not too much snow, not too little. Just right.

Did I simply motor drive. Hells to the no. I wish I could have, believe you me. And trust me, I tried, at the slowest possible frame rate the D4 could handle (a paradox for most pro camera body seekers). Yes, I cranked her down from 11 fps to a modest 2 fps. My friends, FYI, if you are looking to motor drive while working with speedlites, it ain't gonna happen. Unless you are working with some Profoto packs or some Einsteins, you better be prepared to endure the seemingly endless recycle times of this type of strobe. In reality, the recycle time may be a second or so, depending on your power settings, but lemme tell you, those seconds feel like an eternity. Don't misunderstand me, I freaking love the portability and cost effectiveness of a speedlite. But that freaking recycle time? It can be frustrating.

We worked, like I said, about 100 frames. Total flash misfires? I think about 10 frames. A 10% misfire rate working as fast as I could at 1/2 power? Not too shabby.

The total time to get the shot? Eh, about 10 minutes if I had to guess, possibly less. I don't have the files at hand to check the metadata from frame one to the final frame. There you can see the exact times a frame was shot, down to the second. Metadata is valuable tool, I advise referring to it often.

In those 10 minutes or less, there were zero damages suffered. Betsy is a beast in any weather. I don't blink an eye if she comes home soaking wet. The flash head and Pocketwizards were able to remain dry since being covered by an umbrella, go figure.

Um. I'm ready for the next storm! Bring it on! Let it snow!

Over usage of the exclamation point, I know. How pathetic.