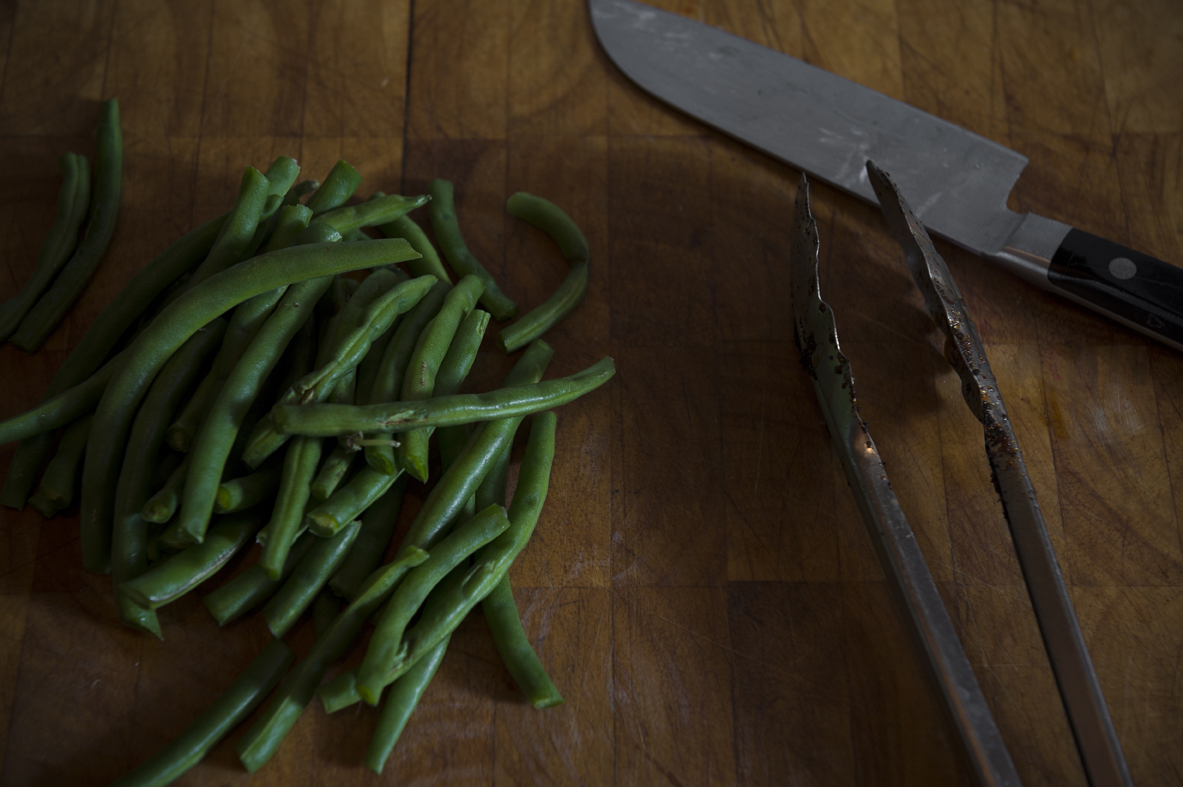 Some of you may have been noticing, via my social networks [Facebook, Twitter, Google Plus or LinkedIn], that I've been throwing around this, seeming to be, strangely pronounced word, Haricot Vert.

In fact, the phonetic pronunciation would be something like this ::

Relax people. Haricot Vert is simply the French word for what we call here in The United States, green beans.

You'll have to agree with me; the French version sounds so much cooler, does it not? Green Beans? That sounds horrible and probably why I had an aversion to such a vegetable in my childhood years. Additionally, during those earlier years, having been served them from the canned version, probably didn't help matters.

[NOTE :: If you cook for your family, I beg of you to prepare fresh veggies, not the shit from a can. It's garbage. And if it's about saving a buck, I think the fresh versions may share a price point that is pretty damn close. Canned is Crap, unless of course it's cranberry sauce. You can read about the cranberry exception [here], in my fist Thanksgiving leftover post, aptly named Thanksgiving Leftovers - Part One - Shoot Your Nuts.]

Green beans? Jeez, couldn't our American ancestors come up with something just a hint more sexy?

Under my roof, and I admit, I'm often referred to as a food snob, the wife and I refer to the green bean as Haricot Vert. Admittedly, this was a term that was only recently added to my culinary lexicon but let me tell you; the word, in and of itself, makes the (fresh not canned) vegetable even more delicious than it already is. Psychosomatic? Maybe, but hey, I'm a big fan and believer of the placebo effect.

Today's food photography discussion was, in fact, borne out of chance.

The concept of the shoot had originally began with the brainstorming of working with a pot roast, cooking in a Le Creuset French Oven. If you are into cooking, even though somewhat pricey, Le Creuset makes some of the best cookware on the market today and many years past.

I was actually having a difficult time with the pot roast. The original plan, to shoot it while cooking, in the Le Creuset, in the electric oven, wasn't seeming to materialize as originally hoped. I then decided to work with the lid of the pot secured, hiding the pot roast completely but really showing the signature lines of the famous French Oven. 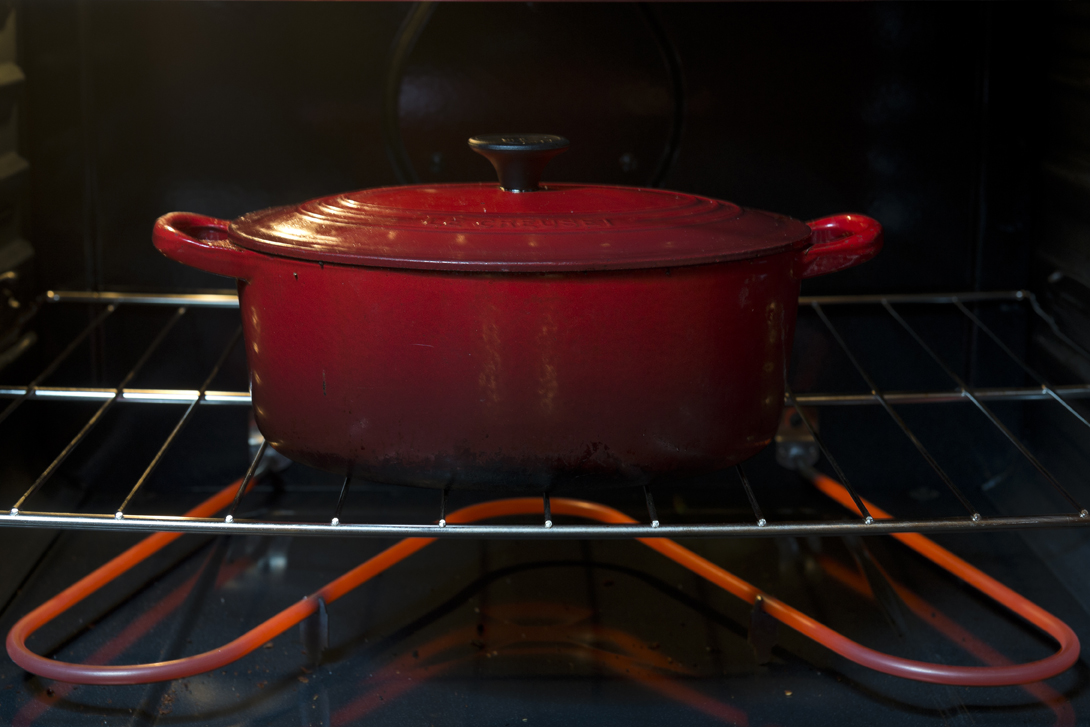 For a product shot, I was pleased but not super excited. The lines and light made me happy, especially the glowing heating element. Happy but not stoked. I had to step away and take a mental reset.

Plan B would be to shoot the roast, in a serving dish and surrounded by some big beautiful vegetables.  Always have a Plan B.

While chilling out for a minute, I took notice of the fresh haricot vert being prepared across the kitchen, on the cutting board.

A Food Photograph Is Born

There it was, the creative lightbulb finally went off. Like a marine sniper, I watched the target and prepared my shot from afar. I carefully positioned my flash head, which was already mounted and ready to rock. 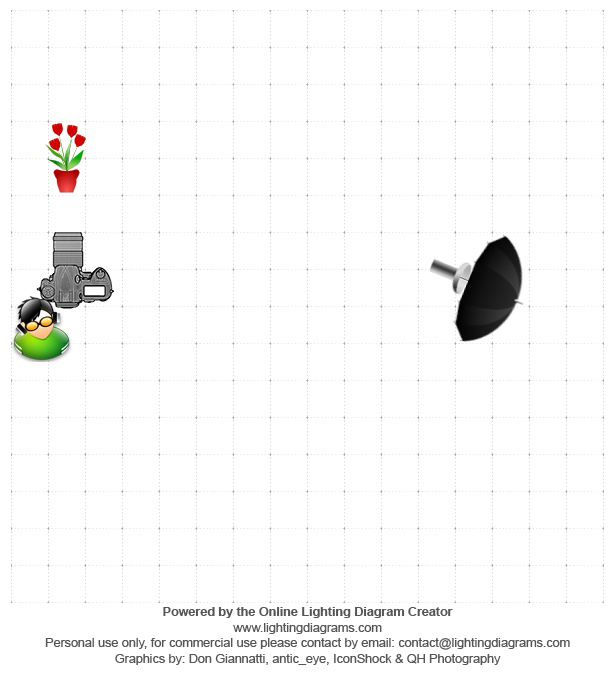 I really wanted to create drama with the green beans haricot vert. The resulting drama would be dependent upon one thing, my lighting decisions.

Typically, when I work with food, I like to keep the lights up super close and personal, creating very soft but very, hmmm, very, I don't know, Bron Para -esque feeling.

Getting involved here is the Inverse Square Law (you need to memorize that shit). When I work with super duper close lighting, at very very low power, the fall off happens much quicker than if working a higher power and at a further distance. If you don't want to learn the physics and/or formulas, that last sentence just about sums up the meaning of the Inverse Square Law.

I decided to get my strobe about 10 feet from the cutting board. This hail mary throw of light would give me a nice subtle fall off as I rake it across the top of the subject matter. To modify the strobe, I chose a 45 inch Calumet convertible umbrella, shooting into, rather than through the mod. At this distance and modification, the light quality would be slightly harder than my usual food photography lighting. Adding some drama, I decided to keep the light at a lower angle, only slightly higher than the scene. This is the ''raking'' that I mentioned. Shadows would be long and soft, but not too soft. Detail and texture? Saweet!

I made my way over to the cutting board and ahhh, there it was. Now I was stoked.

Lying marvelously on the cutting board were the haricot vert, knife and set of tongs. It was glorious.

At that moment I had to make a vital decision; to move or not to move the subject matter. My instincts normally urge me to build a "set" with the food, if you will. On this day, I fought the urge. The food lied perfectly. I made the decision that it was me to move around the food rather than the food me.

After I had decided on a, from above, composition, it was time to make some exposure decisions. As I already said, the goal was drama, nothing super bright and happy. My M.O., isn't it?

Of course I was working with Betsy (Nikon D4) and decided the Nikkor 24-70mm f/2.8G ED for my choice of glass.

I wanted to get f/5.6 so to accomplish this mid ranged aperture, not to shallow, not too deep, I hit ISO 400 and a 1/80 shutter with the strobe popping at 1/2 power ratio to get that drama I was looking for. Keep in mind, working handheld with a shutter of 1/80 is beginning to get into deep waters, if you know what I mean. The 24-70 was zoomed to 62mm. Basically, 1/60, as a rule of thumb, is the slowest I would want to get to avoid camera shake. I wasn't too worried as the strobe would aid in freezing the subject (and my jittery, caffeine ridden hands).

No joke, after about three hours, between the pot roast, the Le Creuset and the haricot vert, I finally nailed it.

[NOTE :: POTENTIAL CLIENTS :: FEAR NOT, THE EXTENDED SHOOTING TIME WAS DUE TO THE COOKING OF THE POT ROAST. MY RATES ARE NOT TYPICALLY PER HOUR BUT PER PROJECT.]

Whew! I could have scared away the entire photography searching community had they thought it took me three hours to shoot some veggies.

In the end, I still thought the RAW file needed some post processing. At the time of this writing, the processing still was not completed. I'm thinking of some pump in contrast and a pull down in exposure. Freaky right. You guys are looking at a photo I haven't finished at this very moment, the moment I'm striking these keys. TRIPPY.

The lesson for the day? Haricot Vert is so much more bad ass than is green bean. Trust me. Especially if you're a single dude or dudette and your are cooking for your date, shit. Your sexual stock will skyrocket if you pimp the word haricot vert. I promise.

Another nugget is before you contaminate a scene with your uncontrollable need for touching things, give a look, with your eyes, maybe things are pretty cool as is.

Le Creuset is the bomb diggity.

And last but not least, keep on shooting.