super selfie :: beyond the mobile 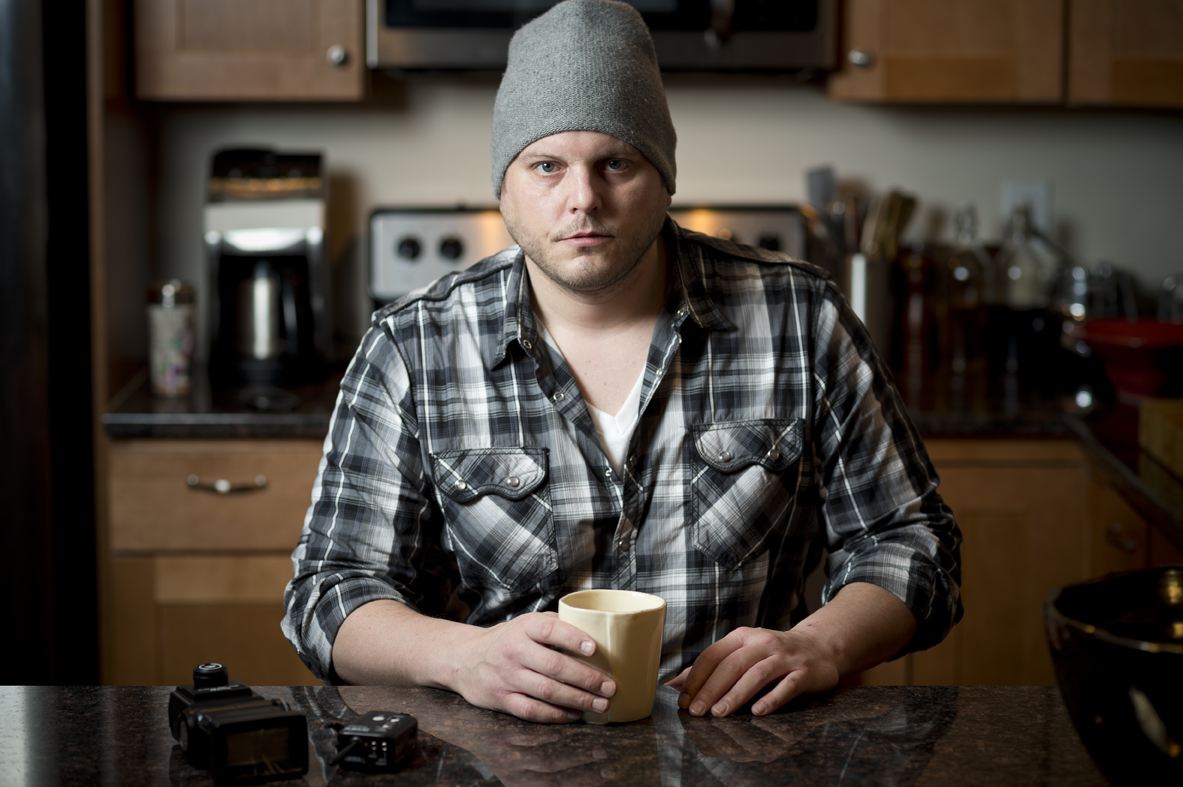 Admit it people, when you recently heard the word selfie, you were as clueless to the meaning as was I. My fellow photographers, amateur, hobbyists, aspiring and pros, let's build a selfie to knock the piss out of the millions that are putting out less than stellar imagery on the internets. More signal less noise.

Defined in the Oxford dictionary, a SELFIE is a photograph of oneself, typically via one's own mobile device. I stress typically since in today's post I didn't go the iPhone route. A camera is a camera and I don't think that using a DSLR to create a selfie is, by any means, a rule breaker.

I opted to shoot with Betsy (My Nikon D4).

I recommend shooting selfies as a creative challenge and even better, creative stimuli.

Often times, when not shooting actual subject, be them human, culinary or inanimate, there tends to be this fear, fear of losing all artistic talent. This is not uncommon. To combat this fear, self assignments are often an awesome way to hone those photographic skills.

I praise the power of self assignments as it is what propelled me into my passion for shooting food, as well as human subject matter.

On the other hand, if you are a people shooter, such as myself, shooting human subjects, during the off season, is a good idea. No humans willing? Welcome the self portrait better known in this day and age as the selfie.

This level selfie will not only help you work on compositional, lighting and other photographic technique, it will really help teach you a thing or two about posing and what it feels like to be in front of that glass. An dose of reality for many.

Here's my journey to the super sexy selfie that you see here today. 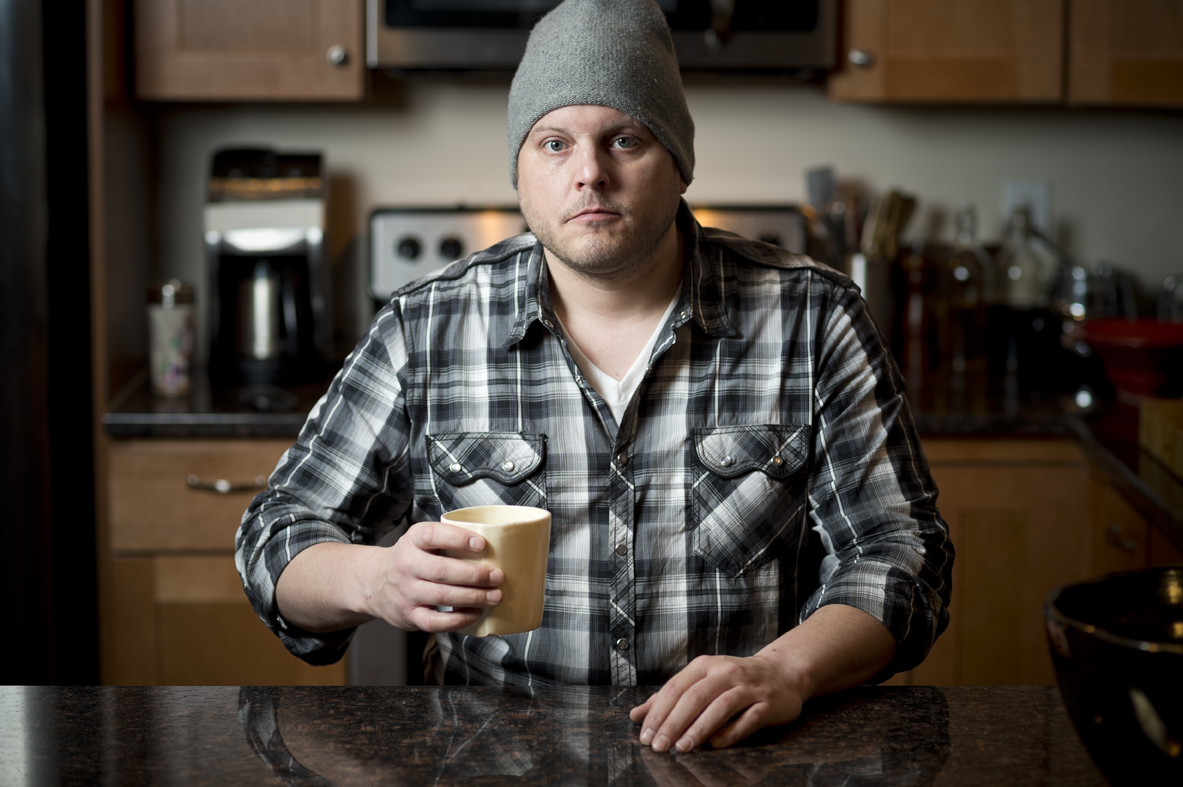 Being in the new digs, I wanted to do an environmental portrait selfie. There are a lot of twists and turns in my new home that didn't exist in the last place. Walking around I knew there were spots just needing the love of Betsy. In a matter of minutes I decided to shoot the big beautiful kitchen.

The cabinetry, granite counter tops, stainless appliances and many kitchen products all screamed to me - TEXTURE! A no brainer.

Out of the gate, you know that I went with the big guns for this selfie. No smartphones need apply.

Doing the heavy lifting would be Betsy, perched atop the amazing Feisol carbon fiber tripod system.

I wanted to compress the scene to some extent, along with the giant melon that sits upon my shoulders. Shallow DOF was my goal with this shot and I don't think the 24-70 would have suited my needs. Instead I chose a Nikkor 85mm f/1.8G, a super pimp, bad ass portrait lens. It's my goto for headshots.

Being that there's not a ton of sunlight coming through the kitchen windows on this rainy day, I decided to light with strobes. Sure, I could have cranked Betsy's ISO to the moon but I wanted to not only work on lighting technique but also wanted a clean-as-a-whistle image.

For the lighting choices I went with two strobes and third, a tiny tiny tiny hint of warmth from the tungsten ambient. That you can see on the foreground bowl, the hat's left (viewer's right) and the background oven. Adds a bit of interest IMHO.

The fill would be a Vivitar 285HV at a power ratio of 1/4, bounced into a 45 inch Calumet convertible brolly. I had that at camera right, about 6 feet from my nugget.

For the key, I had a 430EX ii firing at the same 1/4 power, in a 28 inch Westcott Apollo Softbox. I had this up pretty high, the bottom of the Apollo was just about eyebrow level. I was trying to feather a bit to get some falloff towards the bottom of the frame.

Communicating through the airwaves are my tried and true Pocketwizard Plus ii transceivers. Talk about reliable. My friends, if you are going to work with strobes, I beg of you, spend the extra bucks, get the Pocketwizard triggers, or Cyber Syncs, or comparable. Do not go the Hong Kong route. You will get burned. The no return policies should surely throw up some red flags.

Supporting the mods are the Calumet 10 foot light stands. No air cushioned sissy stands for me. These are a few bucks cheaper and with the max of a few pounds that these stands need to support, I cannot see why anyone would need to spend the extra cash on the air cushioned models. Man up! Ok, I'm lying. I'm sure they rock. I'm just jealous.

I should probably do this more often. 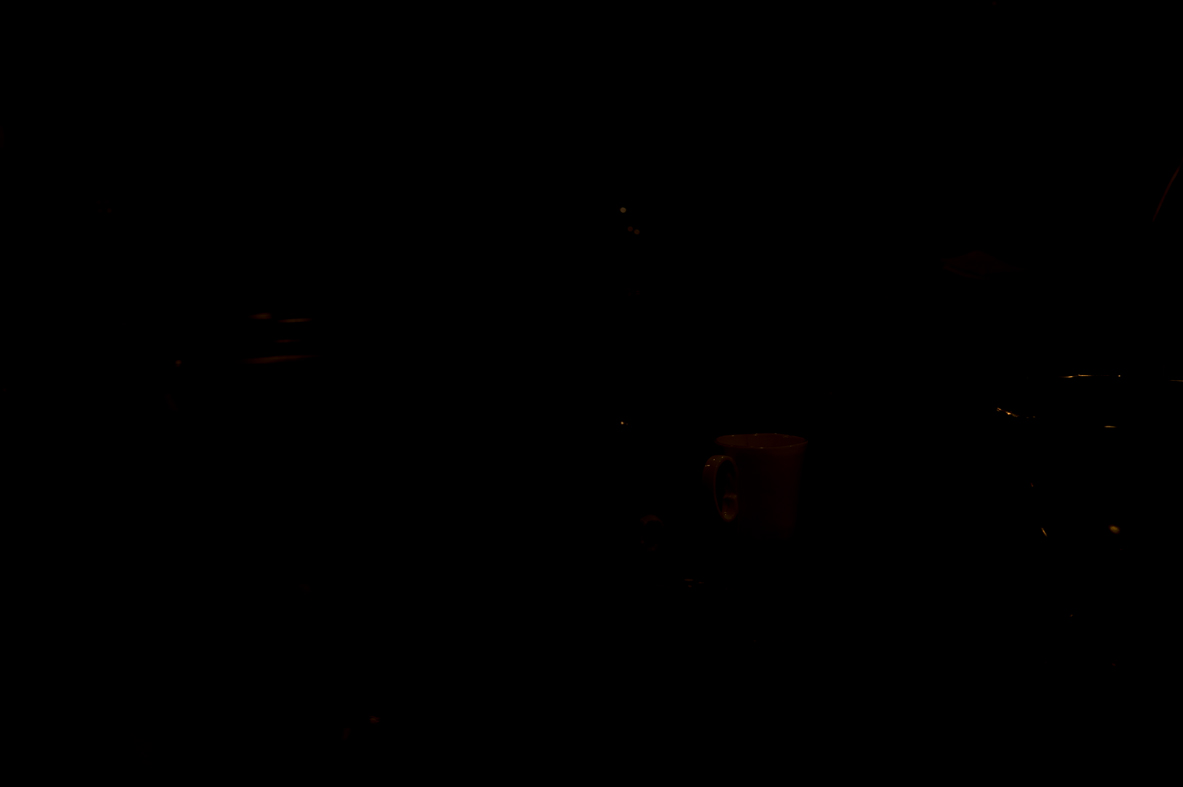 This is where I begin most of my strobe lit images. A bit tougher in the bright daylight but the principles are similar. Here is my black canvas. It is on this canvas that I build light. Notice, barely visible are the tungsten lights, hitting the bowl at frame right and some of the center frame.

I will now add light. 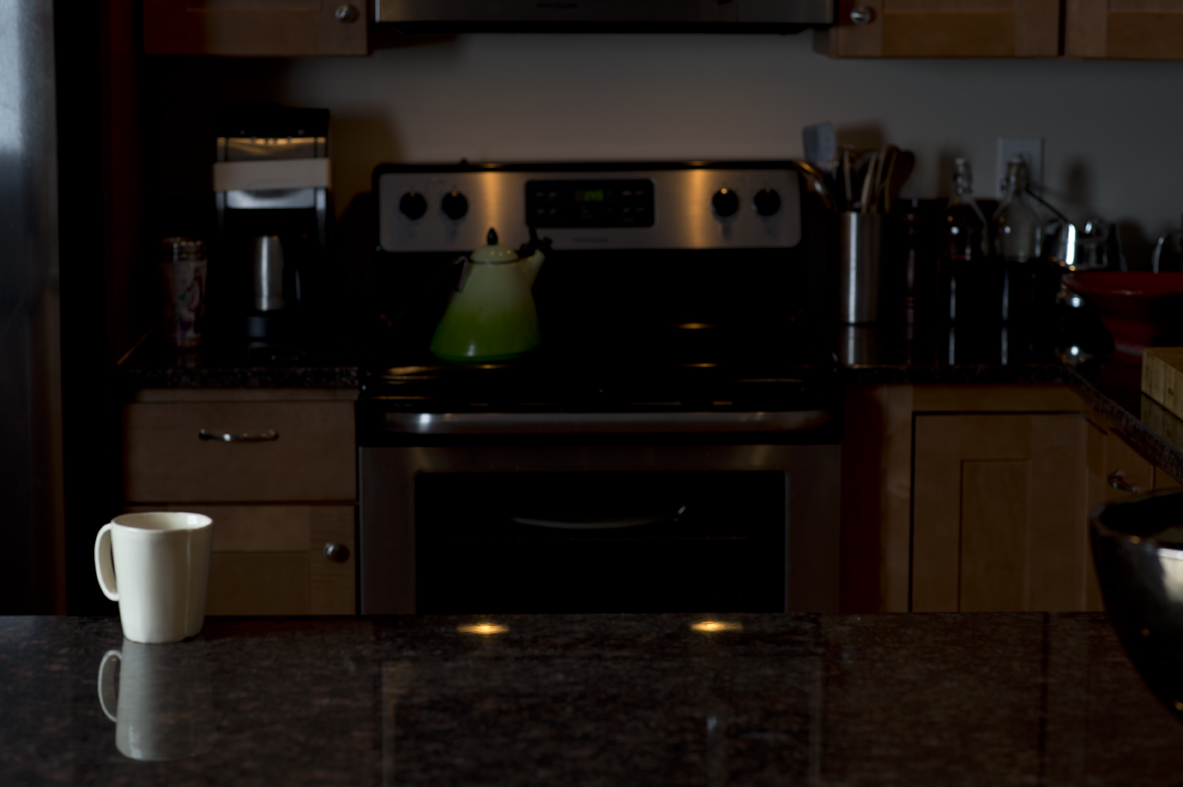 In this image, the fill and key are firing but the key is far out of frame, camera left, it's presence not well felt. I began the selfie sitting at a different angle. This is the reasoning for the current key position. Basically, you are seeing how the image looks with only the fill from camera right. Notice how those tungstens are working nicely as accents.

I tweaked the exposure here to ::

At this point, I'm pretty close to what I want. Close but no cigar. 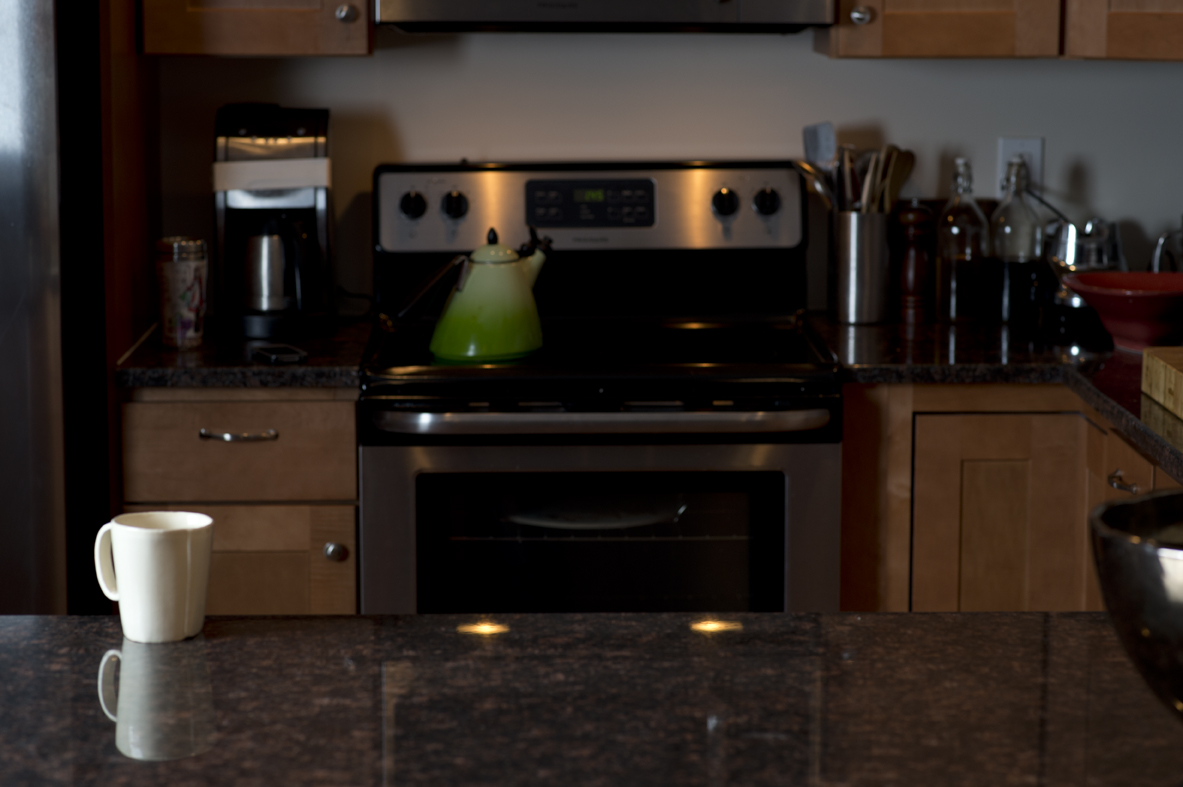 Now we are getting to a usable exposure. At this point I was trying to work the exposure in a way that I wouldn't have to move that key light from its original position. A lazy move. I had to smack myself in the face for that move, or lack thereof. A selfie smack. 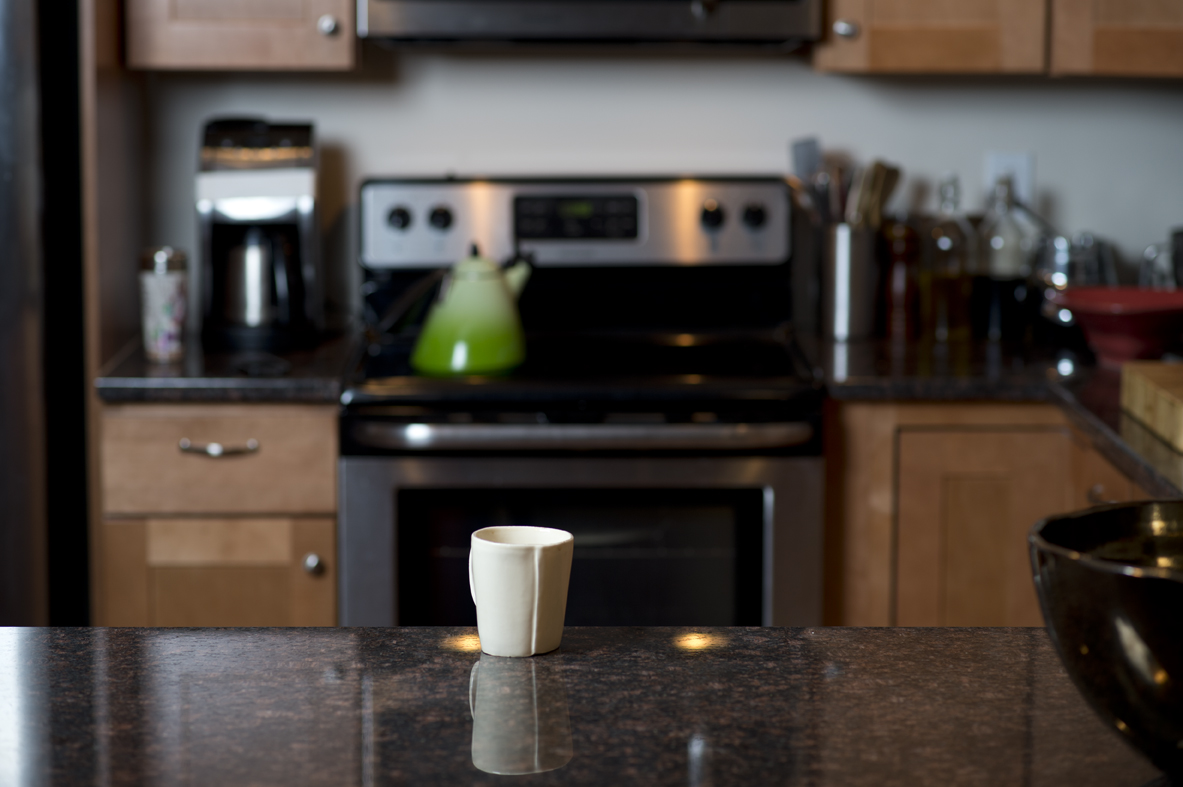 With some final movements of the key, closer into frame, and a couple more exposure adjusts, I was dialed in. Gangsta!

Focus is a son of a bitch when doing self portraits selfies, especially at f/2.8. I wanted to originally hit 1.8 but that would have been a focusing nightmare. 2.8 was as wide as I would allow myself to go. 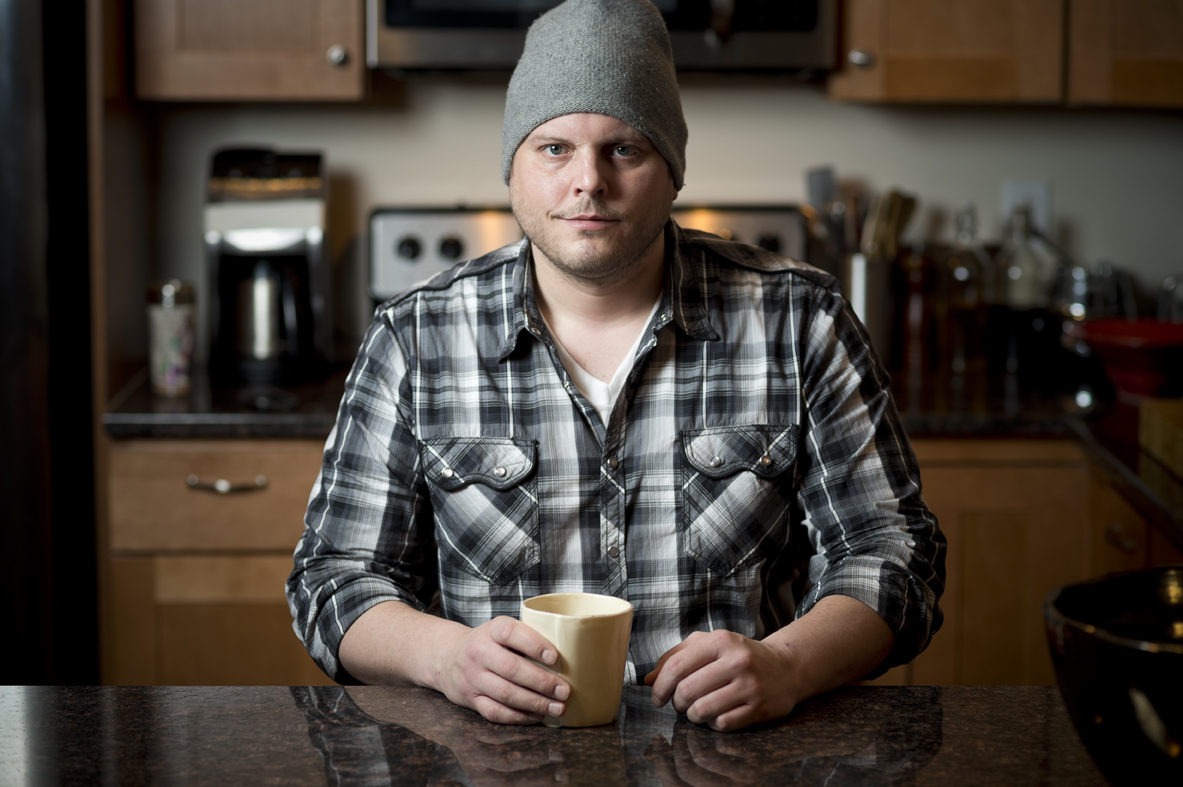 Uploaded the files from the Sony XQD card (super fast) and reviewed the RAW files in Adobe Bridge. Deciding was tough.

Once narcissistically deciding which photos I looked the hottest in, it was time to edit. First I hit the White Balance and cranked the Kelvin temperature from about 4450 to 5000 degrees (ish).

I then went on to pump the Blacks, Contrast and Clarity, ever so slightly. Vibrance was in need of a push to the 15 range. Next was onto the Sharpening where I rarely go above 60. I think during the batch editing I landed them all right on the 60 mark.

You'll notice that in the actual images, compared to the final setup shot, that the back ground is slightly darker. To achieve this I added a good amount of, but not noticeable or calling attention to itself, Vignetting.

All of my edits were done in the Adobe Camera RAW editor. I love the way this handles RAW files and have grown to prefer using over any other editing software. I still export to Photoshop for any detail work but the bread and butter editing is all in the ACR editor.

Love the lighting. Without being too obviously lit, I think it is just right. The key is also nearing a Rembrandt style (notice the triangular patch of light under my left eye). Time and time again, I go back to this style of light, yielding the best results.

The Shallow Depth of Field was just what the doctor ordered. Many people, for this type of shot, would have went crazy to f/11.0 or f/16.0, wanting the entire room super sharp. I thought the background would have been to distracting and feel the Shallow DOF was a good decision.

Focus, to my surprise, was perfect.

I didn't realize my fingernails needed a trim.

My pale, prepubescent, hairless, chest would have called less attention to itself had I hiked up the V-neck a bit. A 1/4 CTO would have been a nice remedy for a pale bastard such as myself.