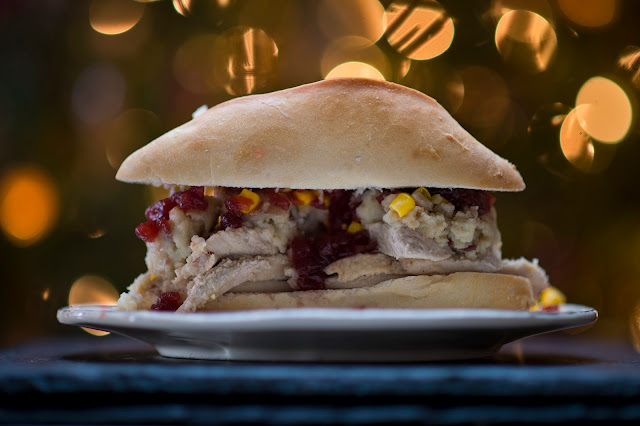 Thanksgiving. A holiday where gluttony, a deadly sin, is revered rather than scorned. Being a photographer with a love for the culinary arts, I must admit, this hoggish holiday is right up my alley.

Join with me, today, in a ravenous journey from the oven to our bellies and beyond...

Thursday, Thanksgiving 2013, was far from a day of exclusivity, as I'm sure was for most families in the U.S.A. Tradition. Look, I'm not a hater but the repetition of some holidays can be a bit maddening. Fact of the matter is, I freaking love spending time with family and holidays are a way of getting those relatives together when they otherwise, would not. My only gripe is what it is, tradition. And we all have this same tired tradition... turkey...mashed potatoes...stuffing...cranberry sauce. In fact, about 50 MILLION turkeys are cooked on Thanksgiving, each year, in the United States of America. Aren't you all tired of this same dinner at the same house at the same time, year in and year out?

A dear friend of mine described his Thanksgiving as Groundhog's Day, the famous Bill Murray film where the lead character wakes up to the same day, over and over again. Time fails to move past this single day. My friends comparison of holidays to this film really hit home with me.

We typically arrive there by about 2:30p.m. (early eaters, unlike my wife and I). The festivities begin by the same old routines. The guys watching football on the television while drinking beer and exchanging banter about their daily grind while the women discuss clothing or the latest gossip as the whites and reds start to flow.

Soon thereafter, dinner is served. Uncle Jimmy's the man behind the turkey. The guests all bring some concoction of they thought would be the world's greatest idea for a side dish. Some are super delicious while others I wouldn't go near wearing a hazmat suit and a Geiger counter.

I won't even get to dessert since I've probably, without tryptophan, put you all to sleep already. Why?

BECAUSE IT'S GROUNDHOG'S DAY!!!

I'm sure this shit sounds painfully familiar. Raise your hands if pumpkin pie is next in the lineup.

Reinforcing my earlier statements, I love the holidays. I love spending time with family. In fact, I love some of the regular Thanksgiving foods. But, I despise the regularity of them.

The wife and I, although must follow some of these traditions, do so in vain. We try to advocate the breaking of tradition. This is not to say we don't want to celebrate holidays, no, quite the contrary. We just prefer to spice them up, throw a curve ball, so to speak.

Here, take this scenario. Imagine we were walking towards the front door of my aunt and uncle's home and could hear the faint sounds of Rajasthani music. Upon entering the home is decorated as some may have never even seen in their most colorful and wildest dreams. The women are wearing Sari and the men cooking daal-baati, tarfini and raabdi.

We have just stepped into an Indian themed Thanksgiving.

Now, wouldn't that rock?!?! Traditions are meant to be broken people. This country has been eating turkey on Thanksgiving for 500 years. Aren't we all tired of this shit?

Stir it up. Cause some commotion. It will be quite refreshing. Save that turkey for, oh, I don't know, 4th of July, when nobody was expecting it.

Hey, a boy can dream, right?

It was Thanksgiving evening, approximately 7:00 p.m., when Stefanie and I were handed our traditional tray of leftovers before heading home.

This year, I am thankful to have brought the leftovers home as I really wanted to share with you America's traditional (I know, I know) Thanksgiving leftover meal, the Thanksgiving Sandwich. This year's post couldn't be more appropriate. And hell, my posts often veer away from the chosen titles. This calls for celebration.

As I bitched and moan about the tradition of this and many holidays, I did mention (I'm no hypocrite)  that I do enjoy the ingredients, more so than on the day it is originally served. I'm such a rebel. Yeah, that Thanksgiving Sandwich is delicious, a marriage of food groups, piled high on a flour and yeast based product. A mixture of texture, flavor, aroma and color that stimulate so many senses. A fat boy's fantasy.

A photo shoot was necessary.

A photo shoot was born.

Before we build the lighting, exposure or the composition, we first need to build the subject, the Thanksgiving Sandwich.

The turkey, potatoes and corn were all I had left by the time the shoot was to occur. The fresh cranberry sauce was devoured moments after making it to my digs. I had to improvise and run to the store for the canned jellied crap that people claim to cranberry sauce. Hey, to each his own I suppose.

Once all the innards of the sandwich were had, it was time for the bread. In Philadelphia, [Cacia's Bakery], a historical institution of the city, is the best place to buy fresh bread, or pizza for that matter. This is factual stuff people, not opinion. Their breads and pizza are life changing.

Boom. The ingredients are ready to rock and roll. First, I took the Cacia's dinner roll and sliced it in two. I then took about five thick, juicy slices of turkey and threw it on the fresh roll. After that base was set, it was time to pile high the mashed, corn and cranberry sauce (I don't dig stuffing). About to topple over, I finally and gently placed the top half of the Cacia's dinner roll onto the sandwich.

Before I even conceived of a lighting scenario, I decided that I wanted to use the fresh new Christmas Tree that the wife and I chopped down at Linvilla Orchars, in Media, Pennsylvania, as the background. I thought that using a fast lens that would lead to a nice buttery bokeh would be a perfect accent to the holiday meal.

The Thanksgiving Sandwich lied atop a plate from Crate and Barrel which I lied on a cheese slate on top of another cheese slate which all laid on a black table. This would all lend to some color, texture and foreground depth. 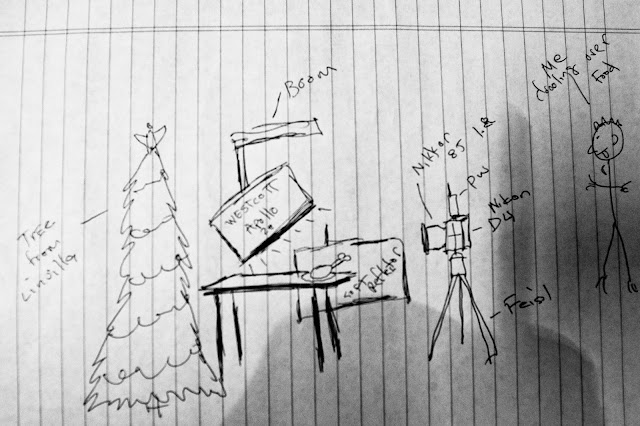 Now, let's reverse engineer the delicious photograph. Here is a rudimentary diagram of the lighting situation at hand. I went to build this at The Online Lighting Diagram Creator but felt this needed some more of my artistic attention.

Let's now build from back to front (left to right).

First we have the ginormous Christmas tree freshly cut (by yours truly) from Linvilla Orchards. Here the tree is decorated and I wanted to create a nice big, buttery, bokeh with the lights via a super shallow DOF (fast glass).

Moving forward we run into the 28 inch Westcott Apollo Softbox, angled almost down on a 90 degree angle. Almost. I tilted the softbox, just barely towards the camera. This is giving a nice separation/rim/kicker which in turn is aiding in that glowy feel that the sandwich is emitting, especially the bread.

Coming even closer to the camera we see the actual food. Since the sandwich was being lit from behind, the core ingredients were primarily in the shadows. Now, they weren't clipped but super dark. I could have saved in post but wanted to pull up the fill more naturally. I decided to grab a medium sized soft white reflector and place in pretty tight, camera left. I know, the drawing shows camera right. I had to draw this way to make it look more pretty. More easily I could have flipped all of the elements of the photo to... eh, I'm digressing. You get the point.

Progressing right we run into my honey, Betsy (my love, my workhorse, my Nikon D4). There Betsy is coupled with a very sexy, very fast, Nikkor 85mm f/1.8G. The Nikkor was opened wide to allow for that super shallow DOF. Betsy is also dressed with a Plus ii Pocketwizard, transmitting the radio signals to the modified strobe. The entire beauty is perched atop the Feisol carbon fiber tripod system. Oh so pretty.

As if I wasn't just nerdy enough, I bring it to the next level. I'll break this down, pure and simple. Enjoy.

The freaking holidays are upon us yet again my friends. Need I say more?