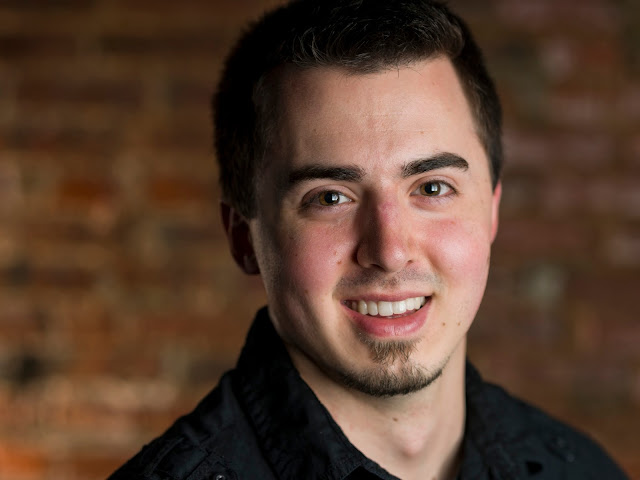 Working with creatives, like myself, is always inspiring, especially when they are new on the scene. The air of excitement often overpowers the room as like minded brains speak with ease as the conversations are fueled with passion and empathy.

Recently, I had the opportunity to work with an actor/comedian working his way into the scene. Nick Kelly, hailing from Delaware County (not in Delaware), a surrounding suburb of Philadelphia, is the star of today's photography/lighting tutorial. Please, join me as discussed is how one photo shoot turned into pure awesomeness.

Nick, who I've known for quite some time, had reached out to me, in need of headshots, one of the most important assets for all actors, comedians, models or anyone else trying to sell their "look" for that matter.

For an actor, the headshot is the equivalent of the doctor's CV (curriculum vitae). When submitted for a part, among hundreds of other similar looking people for the same gig, the actor's headshot is a vital weapon in the war for winning the big role. What will keep Nick Kelly's CV from being buried, or worse, tossed in the garbage? Excuse my over usage but the answer is one that has become my mantra. . . AWESOMENESS!

Just how important is a good headshot? I'll share with you a perfect example. It was a few months ago and I was working on a model shoot that actually never materialized. Anyhow, I was reaching out on various social media platforms and requesting model applicants. I received many correspondences, along with their headshots. Look, I'm no big corporation, I'm just MICHAEL ANTHONY MURPHY :: PHOTOGRAPHER. I don't have an office in the Comcast tower nor do I ever intend to. Ok, maybe I would but that's neither here nor there. My point is, in the grand scheme of life, I'm a small business man, and even though I may not be Ari Gold, but I still put a heavy weight on how important the headshot was for those models. What did I receive? Lots of great shots that I put on the top of my list and shockingly, people who actually took photos of themselves with less than amateur skill. I swear to you, one or two models even sent me photos that they took of themselves while standing in the bathroom mirror and shooting with their phones. You know where those headshots ended up? Well, after showing them to my friends, in disgust, they ended up in the abyss, never to be seen again, Zero consideration.

In my opinion, the headshot needs to be shot by a professional, and moreover, a specialist, one that has experience, not only with a camera but with the headshot, specifically. Basically, don't go to Walmart for a headshot (or any photograph for that matter). You go to a place like that, pay a cheap price and end up with, excuse my language, shit.

You get the point I'm sure.

I began to set up the "in digs" based studio early on the day of the shoot. Normally, for a headshot session, I would throw up the background stands and a roll of paper, typically white, or less often, black. On this day, I wasn't feeling it. I wanted, for Nick's headshot, to have a bit of color, texture and pop if you will. I wanted the feel of the headshot to coincide with his personality. Nick is a funny dude and I don't think that a classic white background, although super awesome, would suit his needs.

I decided on using my brick wall, the wall that I actually avoid using for shoots. I've used it in the past with less than pleasing results. That was until I figured out what it was that was bothering me. You see, in the past, I've typically had the client close to the wall, shooting upwards of f/8.0 or something like that. Basically, no buttery bokeh, the entire scene was in focus. Even more, the bricks  have a clear coat of sorts, a sealant, which is highly specular. The results? Eh, let's just say I began to avoid the bricks. Now, at that time, I was still wet behind the ears when it came to studio lighting and such. It was more difficult for me to reverse engineer, analyze and fix the photographic situation. Nowadays, I can more quickly assess an environment and decide what it will take to make something bad ass.

The bricks were to be reborn on the day of Kelly's shoot. How so? First of all, I would keep Nick as far from the wall as possible. Along with his distance to the background, I would shoot pretty wide open, but not too wide as to blur out too much of his face. I think I ran the entire day on the 85 1.8 at f/2.8. That would give me nice DOF, blurring out the wall and keeping Nick, for the most part, in focus.

Nick arrived early that afternoon. By that time I was fully caffeinated and the floor was set. Gladly, he followed instruction, bringing with him, multiple wardrobe changes. I can't tell you how horrible it is when someone shows up with one bad outfit. The t-shirt with the stretched out collar. Boy does that look like shit on camera.

As Nick went to change, I ran through the gear to check all was ready to rock and roll. 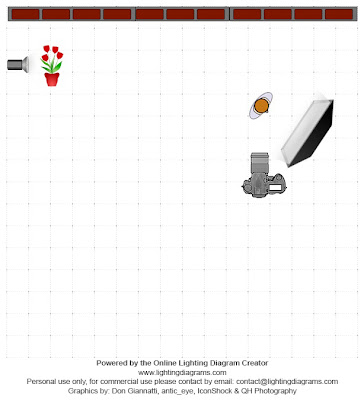 I know some of you may be looking at the lighting diagram with a bit of confusion. Don't worry, it's not as confusing as it looks.

Ok, before jumping into the whys of this lighting, let's discuss first the whats.

Hmm, where do I begin? Ok, starting with the camera, I shot with Betsy of course. For those that don't know, Betsy is my Nikon D4, my baby, my love. Strapped to the D4 was the Nikkor 85mm f/1.8G, a kick ass portrait lens, in my opinion.

The camera was perched atop my Feisol carbon fiber tripod system with ball head.

Running out of the side of the camera was about 25 feet of ethernet cable, allowing me to shoot tethered to my MacBook Pro. This way I would be able to show the client exactly what we were shooting, live and large. Cameras have small screens and it's hard to really interact with a subject when the screen is only a few inches wide. Tethering allows both the subject and myself the capability to analyze what is happening and how to adjust accordingly.

To camera right you will notice the medium sized softbox. This has been my go to modifier for some time now, the 28 inch Westcott Apollo softbox. Big beautiful light while still highly controllable. It folds like a brolly. It's just effing perfect.

As for white balance, I was set to a Kelvin of 6150 degrees. That was pretty close to daylight and any necessary tweaks would be dialed in in post production. Since I only shoot RAW, this would be easy breezy. 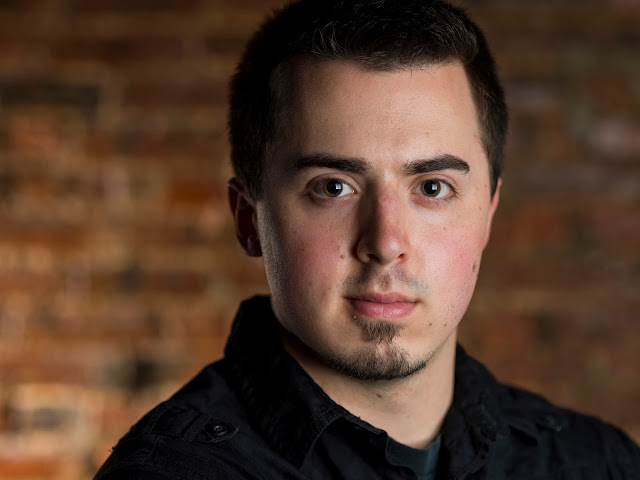 Before I announce that star, take a look at this second headshot of Nick. For that matter, look at both shots. Let's reverse engineer a bit.

First, we can clearly see the main light or key light source coming from camera right. That big beautiful wrapping light of the Apollo. We also can deduce that a softbox was used by seeing the big square shaped catchlights in Nick's eyes.

Before we move on, I'd also like to have you notice his pupil size, big. I prefer this as I feel as it emits pure drama from the overall look of his face. The big pupil is produced by working in a dark ambient setting. When the strobes are fired, there isn't enough time for the pupil to constrict by the time the image is recorded to the camera's sensor. Had I been working in a bright ambient environment or with hot lights, this effect would not be possible. Just a personal preference really.

Coming around to the right side (our left) of his face we see the highly detailed shadow area. This is a result of the key light positioning, coupled with a bit of ambient bleeding in from the slower shutter of 1/100 and the massive, light gathering pixels of the D4. Shadows are your friend my friends! Do not fear them. Remember, it's not only what you light but what you don't light. I think McNally said that.

What is created by the highly detailed shadow area is a bit of drama, interest and most importantly, depth and dimension. Without shadows, photos are typically flat, boring and amateur, unless that is your goal. Embrace the shadows.

Now, without further ado, the rock star of the show.

Take a look at the diagram once again. At far camera left you'll notice the second light source. That strobe, a Vivitar 285HV (big, ugly, awesome) firing at 1/4 power through a vase full of sticks/twigs.

Ah, the beauty of light.

That strobe, is our double duty light. That Vivitar is the real beast, the workhorse of today's post. Look at the photo and again the diagram. Can you see it? The double duty? Check out the brick wall, the glow that's happening. That is job number one of strobe number two, a background/separation light if you will.

Now, take a look at the far right side of Nick's face, the rim (or kicker) light towards the back of his head. This rim is also coming from that second far off strobe at camera left. This is job number two of strobe number two. Light is predictable. Understand some physics and geometry and you can learn many ways to manipulate light. Don't be afraid to experiment.

Oh, the twigs/sticks (represented by the flower pot)? Those are used as my cookie. A cookie? WTF Michael!? A cookie, or cucoloris, or gobo (go between) is a device used to be placed between the light and the surface the light will fall on to. It will add some shadows for added interest or texture, as in my case. I used the twigs to restrict a bit of the light on the wall, helping to add some texture to the already textured bricks.

After about five wardrobe changes and a good few hours of shooting, we finally wrapped up, both of us super satisfied with what was produced.

Yep, I think that's it. Smooth as sandpaper right? Ah, I can't do it. I can't just wrap up that way. Got to summarize.

Ok, the takeaway? If you or someone you know is working in the field of theater, encourage, hell, force them to have an awesome and current headshot. Oh yeah, current is key. We all change from month to month, hell some change day to day. Some days you are bloated while other days you are super sexy. This month you binged on Ben and Jerry's and next month you run a few miles to drop some pounds. The point is, keep the headshot consistent with how you look at the time you are trying to win a gig. If you show up to an audition looking nothing like the photograph you submitted, you should just kiss your ass goodbye because I promise they will not choose you.

You say you don't want a new headshot because you got fat and the old one looks better? My friends, there are plenty of roles for fat people.