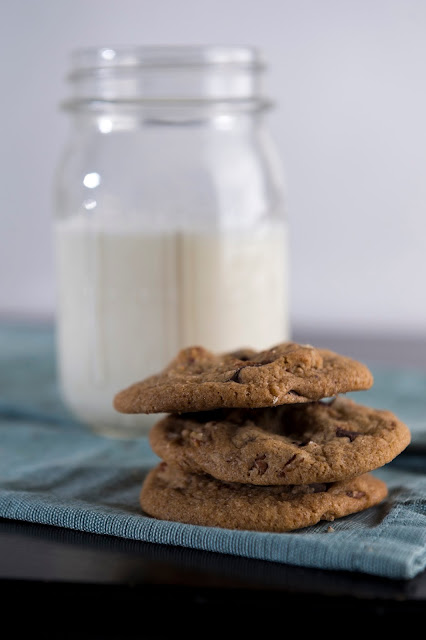 Damn, don't you just want to jump through the screen and tear those triple Cs up? Dip that chocolatey and doughy goodness in that Mason's jar full of milk? Me too, my friends, me too.

Today's post is clearly about this  totally delicious food image and the answer to the six cardinal questions ::

Join with me now in this quest of creating a diabetic's nightmare or, on the other hand, a sugar junkie's [fill in the blank] dream.

Me, Michael Anthony Murphy :: Photographer. I want today to get down and dirty; Less talk and more tech.

Joining with me in this photographic journey of culinary awesomeness, wife, VAL, PA, business manager and Director of Strategic Marketing for Temple Health, Stefanie Murphy. For this particular shoot, Stefanie played two crucial roles. First, she worked as my 1st PA, owning the responsibility for the acquisition of props and ingredients. Next, the brutally honest Stefanie would work as my 1st critic. I always refer to the wife after a shoot. She gives a critique from a purely professional perspective, not a wife's point of view. A priceless tool.

Along with the subject matter and props, there are the tools used to create the image posted herein.

Camera :: Betsy (To those who don't know, Betsy is my other wife. Yes, I live in a polygamous and polyamorous world. In fact, Betsy is my Nikon D4, my workhorse).

Light :: Strobes, speedlights, flashes, heads or whatever you want to call them. Two total, one Vivitar 285HV and one Canon 430EX ii.

Modifier(s) :: One 28 inch Westcott Apollo as the key light mod. One twig arrangement as a cucoloris. One 2x3 soft white reflector.

The CCC (chocolate chip cookie or triple C) shoot took place moments before this post was written. . . .BUT. . . I'd like to rewind and give a short history of how I, single handedly, almost delayed my own shoot.

On the eve of this shoot, I was well aware that I wanted to work with food, specifically the sugary type. Once settled on the classic chocolate chip cookie, I advised my 1st PA to acquire the perfect subject, not just any popular mainstream brand.

When she arrived back at our digs, I quickly ran to check out the subject matter for the next day. Normally, I work primarily with fresh ingredients but due to the last minute idea for this important personal project, store bought would have to suffice. The winner for the project would be Gourmet JIMMY'S COOKIES brand of chocolate chip cookies.

I was quickly warned not to eat any cookies during the hours overnight and leading up to the shoot. This statement was obvious but one that I would have trouble obliging to. You see, I have a bit of a weakness for the sweet stuff but not throughout the day. In fact, the addiction rear's its ugly head during the later hours of the night, when I'm barely conscious and my will power is at its weakest point.

Needless to say, I buckled.

When the dawn of the shoot had arrived, I realized there were nothing left but a container of crumbs. DOPE!!!

I should've known better. Well, I had to get another container of the triple Cs. Problem solved.

The why of the cookie shoot is imperative, in my opinion. Before I go any further, take a look at the MICHAEL ANTHONY MURPHY :: PHOTOGRAPHER main web page linked [here]. Upon arrival, look for PORTFOLIOS and then make your way to the food section. Hit the play button, sit back and enjoy the culinary awesomeness. Now, did you notice anything? One of these things is not like the other. What is it? It's the sad lonely cupcake at the end of the stream. One, I repeat, ONE, single effing dessert in the entire food section. NO BIEN.

The portfolio is significantly lacking in the sweets department. This is a lesson for all creatives. Diversity and Cohesion. Without these elements your portfolio will feel very awkward. I was well aware of my lacking in the desserts and decided to take action.

So, action was taken.

Eh, Didn't feel like a lighting diagram today. Words will have to do. Guess what? Suck it up. Reading is good for ya! Work that gray matter between your ears.

Before I "how" you, lemme' help you reverse engineer the photograph, just a bit.

Looking at this photograph compared to much of my other works and you may notice this is not par for the course. Typically, these days I like to go for drama and I achieve this drama by the less is more paradigm. Less lights and way off axis lighting positions equates to contrasty, dramatic imagery. Right up my alley.

I went with this style for this cookie photograph but what resulted was a slight problem. The milk. With one side of the milk being in the shadows, it felt, well, it didn't feel yummy and delicious. The entire glass of milk needed to be white. With that being said, I had to bring in a second and theoretically a third light source. I had to even things out. Here's what went down ::

Once the food was properly placed, it was time to bring in the gear. At camera right, hard at a 90 degree angle towards the scene, was the key light, the Vivitar modified by the Apollo. I was pumping that strobe at 1/16 to get f/5.6 at 1/250 and ISO 200.

I wanted f/5.6 for the simple fact that I didn't want to go super shallow or super deep in the DOF department. I found 5.6 to be the sweet spot for this particular scene.

I used ISO to dial in and make the final exposure tweaks. I have no qualms about working that ISO into stratospheric numbers as Betsy will knock your socks off at just about any setting. In fact, in the evening, I rock out ISO 12,800 all night long, without blinking an eye. 200 for a product shoot? Puuhleeze.

White Balance? Shit, I don't even remember, somewhere around 5000 Kelvin. Look folks, I know that even the best of the best pick certain items in the white balance to match the environment, I.E., FLASH or TUNGSTEN or DAYLIGHT or whatever. That's fine. I can dig it but personally, I like to manually choose my Kelvin temperature. Now, not all cameras have this ability but if yours can, give it a try. Now, if it isn't perfect, no sweat, I am working only with RAW files so tweaking the temperature is not an issue.

At this point, we are right in my shadowy, contrasty territory but that milk, damn that wasn't looking delicious. To remedy I first brought in the bare 430EX ii, way down at 1/32 and firing through the twig arrangement (cucoloris) at camera left. This would fill the left side and do so with a bit of texture. I also added the soft medium sized reflector directly behind the subject matter to bring up the background and add some life and happiness to the scene.

After firing off about 100 RAW files, varying the light power, distance and camera positions, it was a wrap.

I pulled the files from the XQD and went for round two, editing. 99.9% of the processing occurred in the RAW editor. Exposure was pretty damn close in camera. Little had to be done. I pumped the contrast ever so slightly, along with the fill and clarity. I did some lens correction and pumped some sharpening. What else? Umm. That's about it.

Last but not least? The cookies had to be destroyed via my GI tract, followed by the big glass of milk.