food photography :: brunch via m.o.t.s. with a pinch of crushed comfort zones 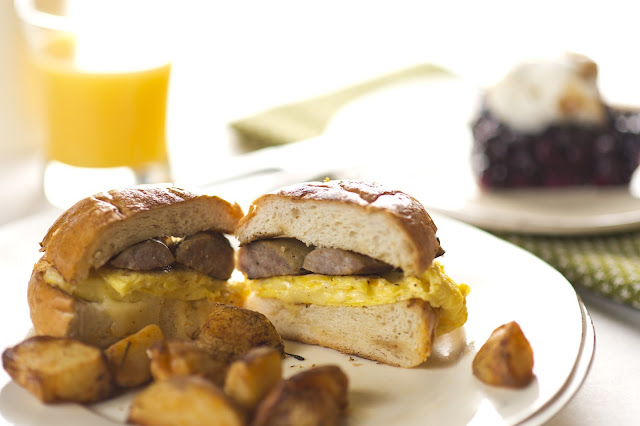 Come on people!!! It's food time! Deliciousness doubled. Yummers to the umpteenth degree. Super salivating satiating spectacularness. Maybe that last alliteration was a bit much. Me? Go overboard? Shocking.

Today's title may be a bit confusing but fear not, your fearless fantastic photographic friend (I couldn't help myself) is here to take you on a culinary ride.

One of my favorite eateries here in ole Rittenhouse Square is M.O.T.S. or Marathon On The Square, right on the corner of 19th and Spruce, in Philadelphia. I've been residing in the Rittenhouse hood for over a decade now and have to say that if you want a solid brunch, you can't fail with Marathon.

Look, for almost 12 years here, I've seen food joints come and go. Scary when you think about it. I mean, the newest, big dollar investments, pimp daddy, trendy fooderies, with tons of heart, soul, style and most of all, groundbreaking menus often come crashing to the ground in a blink of an eye. Today's talented and trendiest chefs are often swallowed up by tomorrows new twist on some sort of international fusion dish, maybe next year it will be southern creole fused with Icelandic delicacies. You never know these days.

Speaking brunch hot spots, today's killer in the downtown Philly market is Honey's Sit 'n Eat, located on the corner of 21st and South, directly across from a popular bar once bearing my name on the menu, Ten Stone. Yes, the Michael Murphy was once a popular brunch item, named after your's truly. No joke. Owner Marvin Pixley and I go waaay back. Long story and somewhat off topic. Well not really. If you decide to hit Honey's Sit and Eat for Sunday brunch, be sure to head across to Ten Stone for a few of many unique ales that frequently rotate though the taps.

Damn, where in the hell was I? Oh yeah, the new gastric gangsta on the block, Honey's Sit 'n Eat. Lines on a late Sunday morning would likely frighten the impatient away while at the same time lure in the hood's hipsters, wanting to know the next cool place to hang after a long Saturday night of over indulgence.

Will they stand the test of time? I don't know. Like I said before, not many do. A sad and ugly reality of the highly competitive food world in Philadelphia.

This brings me back to Marathon On The Square. With three locations in Center City, the first opening back in 1984, you can be sure that you are getting the goods. M.O.T.S. may have been around for a while but don't hate just yet. You can be assured that their menu and atmosphere stay up with all of the players. If you walked into Marathon On The Square today, you would see zero signs of age, with the newest ambient music to the ever changing, awesome menu. 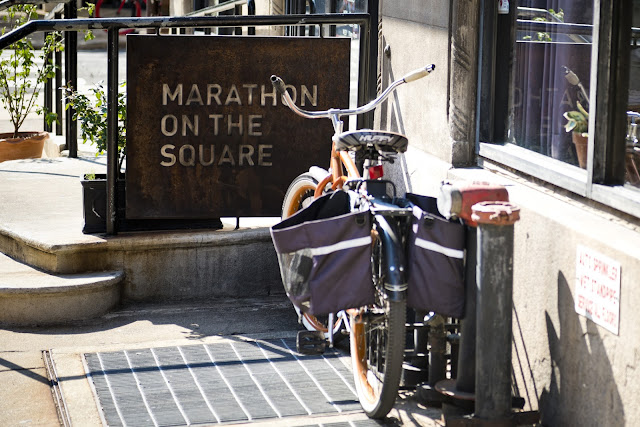 Is this to say that I'm not one to try out every single hotspot that blazes its way though my neck of the woods? Hell no! Honey's Sit 'n Eat? Bring it on baby. Next year's Icelandic creole? I'm game. But, when I'm not in the experimental mood, gimme tried and true. Marathon is always there for me, and only about a block away from my house, that helps too.

A Pinch Of Crushed Comfort Zones

Jeez, I just felt like a Craig Laban restaurant review, only nicer. Ha, maybe the invisible man is channeling his food critiques though my roof. Possible, since this unknown face lives about 50 feet from my digs. Now, if all paparazzi can just triangulate my IP address, Marathon's front door and another point I've probably written about in a past post, you'd probably be able to locate his front door. Damn. I'm digressing today, a whole lot.

I mention comfort zones. It is quite easy to get in a rut, of sorts, when it comes to creativity or, in fact, lack thereof. My work with food photography has, as mentioned, really grown over the last year or so. In that time, I have found some photographic techniques that work for me and, well, some that don't.

A for instance? I'll give you a few. Like many of my photographs, my food photography composition is typically very big, very bold, very in your face. It's me. It's my signature.

Another staple of my food photography is my lens choice. Most often, probably 99.9% of the time, I shoot with the Nikkor 24-70mm f/2.8 G ED. She's a beast. She's big. She's beautiful. She's awesome. The 24-70 is without a doubt, one of my most versatile and most used pieces of glass. Why is she my most chosen for food work? Number one? I don't own any macro glass and I'm in no rush to go out and buy any. I have lots more ahead of macro glass in my gear needs/wants list. Without macro glass, it's typically impossible to get a super short focal distance. Now, with the 24-70, I can typically get much closer than any of my prime glass. For this, I like to shoot food, since, as I said a paragraph earlier, that I like my comps to be big, bold and in your face.

Lastly, I want to discuss another comfort zone that I have seemed to, even somewhat unknowingly, entered. Light. Yes, with much of my food work (and everything for that matter), I seem to light in a somewhat similar fashion. I'm not saying that there's anything wrong with this. Hell, it has in fact, been somewhat of my signature way of shooting. The style I've developed. Basically, my exposures are often on the even if not darker side, careful to never ever ever clip the highlights. Sure, I pump the blacks and welcome clipping in the shadows but would never conceive of doing this with the highlights.

Ok, so we've identified my comfort zones and for the meal you are seeing above, I have crushed every single one of them. Are my comfort zones bad? No but it is nice to experiment outside that zone, to liberate your right brain and help, if just for creativeness' sake, a mental workout of sorts. Exercises like this will help stir up new ideas upon the next shoot, whether it be human or food based.

Let's Get Down And Dirty 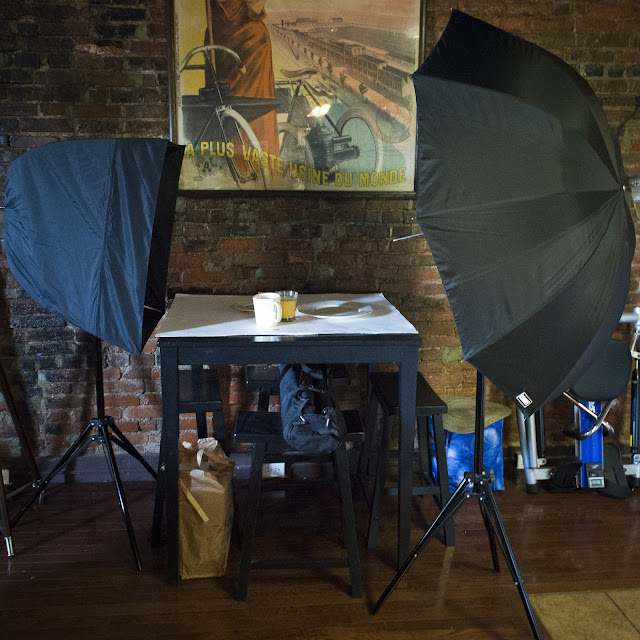 Far left is the back and key light. Perched on the Calumet light stand is a 28 inch Westcott Apollo recessed softbox. Hands down, this is my goto modifier. Big, beautiful, highly controllable light. Spill is a non issue with this baby.

Inside that baby is a Vivitar 285 HV. Ugly as sin but those strobes are my workhorses. Inexpensive and reliable.

Next, to the right, in front of the key light, is the food setup, the stage if you will. To mimic that of a white table cloth, not having one, I had to improvise and use two sheets of white poster board. Seeing these ratty old sheets up close and personal and one would never think to put in front of a camera. Dirty and wrinkled to death. I kid you not. Ah, but I knew on this day, I'd be going for nuclear light and with that bomb I'd be able to easily hide the fact that this makeshift table cloth was in fact, not a table cloth.

Moving on, you will see another modifier. Before I get into that, let me first explain my shooting position. I already mentioned that the Westcott is a key/back light. With reasonable deduction, you can assume that my shooting position is on the other side of the large umbrella, on the right side of the table, where you can see the exercise machine, leaning against the wall, needing my big butt rowing it, as soon as I finish this post. Sigh. Basically, I'm angled down on the large dish, shooting towards the Westcott.

So, that other modifier? On that Calumet light stand is a 45 inch Calumet convertible umbrella. Firing in that mod is a Canon 430ex ii speedlite. This would play the role as the fill light as that key/ back light will likely leave the front of the food, in the shadows.

Of course there has got to be something triggering those strobes. My friends, if you want to save a few bucks, please, I beg of you, don't let it be in the trigger department. I promise you, wholeheartedly, that you will, one day, be lured by the awesomely priced Hong Kong triggers, whichever brand they may be. And, my friends, I promise you, you WILL be disappointed. For triggering purposes, spend the extra few bucks and invest in the industry standard, Pocketwizard. I'm using the Pocketwizard Plus ii transceivers. They never, ever, ever, fail, ever. I've had them behind 1000 tons of concrete and they didn't miss a beat. Just sayin'.

As if I wasn't getting nerdy enough, let me dive into some more tech details which made the above possible. Why? Because that's how we roll.

These are the details that helped me travel down new unexplored roads. How I crushed it.

First of all, and I'll go in order from above, I wanted to create more of a scene rather than a single, in your face, shot. For this I added a few elements to the stage. In the foreground you will see the home fries. Moving back, the main subject, the sausage, egg and cheese on a brioche bun. Beyond that, beyond the shallow depth of field, you can find the orange juice and homemade blueberry pie a' la mode. The pie is resting on the plate which rests upon a folded towel. Silverware is resting upon that dessert plate, a knife and fork. The beautiful thing with shallow DOF is that many times, and many of you probably already had without my sharing, extrapolated what those blurry elements were. With the shallowness, the viewer knows what they are seeing but their attention is focused on the star player, the sandwich.

Next, I wanted to work with a different focal length. I decided to work the Nikkor 85mm f/1.8G. I'd have a few motives for that specific lens. I totally wanted minimal DOF so this would be a good choice of glass as I worked it wide open at 1.8. Further, the 85 would compress a bit more which meant, along with its inability to focus super tight, I would have to take a step or two back, focus with my feet. I liked what I was seeing.

Finally, my last comfort zone and probably most identifying, my lighting. Let me break it down for you.

Here's how I achieved the bright, blown out look.

Whew. tired. Hungry. No, I didn't get to eat that brunch. It's actually sitting in my fridge.

Did I break on through to the other side? Sure did. Rather than play on my pumped shadows, I played on the pumped highlights. Totally different feel. I can dig it. Does this mean this will be my new bag? No but it is one more weapon in my arsenal.

Wrong doings? Ok, presentation wasn't so hot. I shot the brunch in studio. Unfortunately, the containers had reshaped the food a bit. My food designer wasn't on location this day so I had to fend for myself. Not bad considering the smushed bun. To pull it all off I had to do some quick, ER type of emergent surgery. A success if you ask me. What do you think?