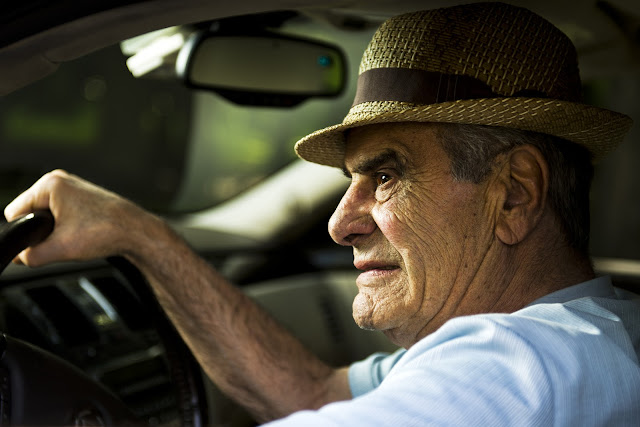 I may sound like a broken record by stating this but here goes anyway...

This was hands down one of my greatest shoots to date. And you know what? That is a great measurement of progress.

And without further ado, I introduce to you, Michael Anthony Scalpato.

In 1906 Antonio Scalpato immigrated to America. Soon thereafter, Laura Mineo did the same. Laura and Antonio began what would become the Scalpato legacies in 1921. One of ten, yes I said ten, children, Michael Anthony Scalpato was born in 1932. Speaking with Mickey, or Scalpy, as many call him, I discovered that his parents were very busy with their new lives in the United States. On average, they birthed about one child every 18 months. That's a whole lotta mouths to feed!

Before Scalpy's parents wed, his father, in 1915, opened the family butcher shop at 13th and McKean Streets in the heart of South Philly, aptly named, Antonio Scalpato's Meat Market. 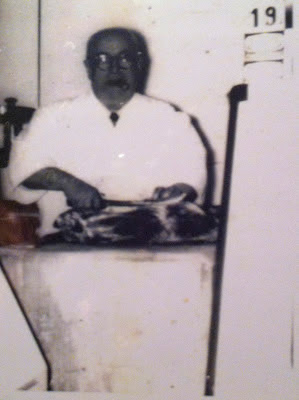 This is a photograph of Antonio Scalpato, Scalpy's father, working in the butcher shop in 1919, four years after its inception.

In 1951, Mickey began working as a butcher at the shop. Only by this time, his older brother Alphonse was captain of the ship, Antonio having passed on the business to the eldest son. By this time, the butcher shop was called Al's Cut Up Poultry. Obviously, branding was much more simplistic back in those days.

Having owned some homes on the block, which were rented to other local Philadelphians, the Scalpato brothers had a plan. The homes which they rented out were shorted one key amenity to their tenants, the basements. Mickey and Al had had turned the basements into a fully functional chicken factory, pumping out chicken products at an alarming rate. As production increased, so did the problems.

It wasn't long before the authorities stuck their noses in these somewhat illegal activities. And when I say stuck their noses in it, I mean that, literally. Think about it. Are you familiar with the somewhat odd odor a raw chicken breast gives off? Now multiply that by 10,000, add in some rotten fowl carcasses and in short time you will probably have some unhappy, probably sickened, neighbors living above and/or nearby this hidden, underground chicken factory.

Luckily, any penalties that could have arisen, were avoided.

In 1956 Mickey took over the shop as brother Alphonse left for another successful carnivorous business venture. And in 1957 Michael Anthony Scalpato's life would change forever. It was during this year that Mickey had an idea, a brilliant idea to say the least. An idea that just about every single person on the planet is familiar with today. More importantly than simply having an idea, Mickey executed the idea, an action that will ALWAYS separate the men from the boys. Everyone has an idea, so few execute.

So what was this idea, this revolution that was so groundbreaking some 50+ years ago?

Michael Anthony Scalpato was the creator, the originator, the pioneer of what is known today as the  chicken cutlet.

Never before, anywhere, had chicken every been cut, processed and sold in this manner. It was truly revolutionary. Instantaneously, business at Al's Cut Up Poultry had exponentially increased. Obviously, the corner shop, now defunct of their clandestine processing plant, couldn't handle the increase of product demand. So, as any smart businessperson would do, Mickey eventually expanded and  relocated.

As demands for the cutlets and other cuts of meat continued to increase, so did the need for resources and manpower. It was circa 1971 when Mickey took on George Della Pia as his new business partner.

Soon thereafter, in 1975, they moved the wholesale part of the butchering business to Front and Callowhill.

Over the years their client base had risen dramatically and Philadelphia Poultry became the king of the Philadelphia wholesale chicken market. Their product, not to be found on supermarket shelves but via large restaurant distributors throughout the city and surrounding regions.

In 1999 Scalpy retired from the chicken business.

Today, almost 40 years later and still family owned and operated, Philadelphia Poultry is continually a major player in the wholesale meat markets. In fact, there is a good possibility that if you are eating in one of many Center City Philadelphia restaurants and you order chicken, of any cut, chances are it originated at Philadelphia Poultry.

How did I come across such a unique and accomplished individual? Well, not only have I enjoyed the company of talking with Scalpy on many occasions, you might say I was born into the delicious staple of dinner plates around the globe. Michael Anthony "Scalpy" Scalpato is in fact my great uncle. Oh, and the old photo of Antonio Scalpato, from 1919? That's my great grandfather. 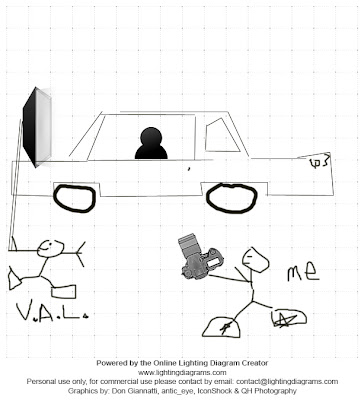 Ok, she ain't pretty but here is the lighting diagram, a generalization of how the shoot materialized into the final image you are seeing above.

Hey, cut me a break, I was drawing with a mouse, not the easiest task in the world. No Wacom here my friends, although it would be a nice gift. Hint hint to whomever wants to buy me an awesome birthday gift. Did I mention that  July 3rd is my birthday? Ha. Anyway, I digress.

Let's reverse engineer the diagram and the image. In fact, let me get to the nitty gritty right from jump street.

I've been wanting to shoot my Uncle Mickey, along with his Cadillac, for some time now. Recently, I was able to get him right in the palm of my hands, right in the center of the spider's web.

On that particular day, my Uncle Mickey, Aunt Annie, Uncle Joe, Aunt Loretta and a few others were having a luncheon at my mother's house. Perfect time to pitch him on the shoot.

After everyone was finished eating, I knew it wouldn't be long before they would want to hit the road and head home. I decided to act at that very moment. Scalpy was ready to work. This window of opportunity wouldn't be long so shooting had to move very very quickly.

The time on this late June day was approximately 5:00 p.m. The clear sunny sky was still a contributing factor, a seriously detrimental factor. I didn't want to use the crappy, cloudless sunlight for anything on that day. In fact, I wanted the 28 inch Westcott Apollo to do the brunt of the work. This would require some location scouting. I was working with a small crew, Morgan, John, Jimmy and myself. John, Morgan and myself walked to find a nice shadowy location. While we were searching, Jimmy was observing and, at the same time, marinating his innards with mixture of fine barley and hops.

The location was spotted and we directed Scalpy to position his caddy in this nicely shaded area.

I knew in advance how I wanted to light him As mentioned, i was using the Apollo as my modded key. I wanted to blast the strobe at 1/2 power, fighting the sunlight best I could. To get the light angled properly, I had John work as my V.A.L. or Voice Activated Lightstand. I boomed the strobe and Westcott and had John aim perpendicular through the windshield.

To bang out the ambient while in the shaded area I worked at a synced shutter speed of 1/250. Along with that shutter decision, I dialed in the f-stop and ISO to f/2.8 and 200, respectively. Combined, this gave me a nice dark environment which I could add the awesome light I was looking for.

I'm not patting myself on the back or anything but reverse engineer the photo once again. Take notice how the position of the large modifier lets the light wrap around the front of Mickey's face and then softly, slowly falls off around the cheeks. Gorgeous.

We worked for about, oh, I don't know, ten to fifteen minutes. I directed him to do some posing inside and out of the car. In actuality, I worked him much more than I thought was possible. Truth be told, I probably could have kept him there much much longer. Why?

Look, I've worked with various types of people. Some easier to direct than others. In fact, some are simply terrified or angry at my camera for some reason, as if it will harm them in some robotic way. These subjects typically freeze up like a deer in headlights. Takes time but they can be molded.

Now, on the other hand, you have those who are hams for the camera. The models, the thespians, the eccentrics, who simply enjoy posing for the lens.

If there were a scale between one and ten, one being horrific and ten being amazing at posing and taking direction, where did Scalpy rank?

No joke my friends. I was completely shocked. Mickey has a tough demeanor and I totally thought he would want to smash my gear rather than pose for me. I was super shocked when he worked that lens like a pro. I mean, he pulled out some poses and took to direction so easily, so fluidly, it was as if he were a full time model. Really. I couldn't get over the fact of how professional he was, in terms of modeling. Bottom line? Pure Awesomeness, in every single way.

Here's something I don't usually do; share my exact numbers in the ACR (Adobe Camera RAW) editor. Don't get me wrong, I'm not hiding them or anything, I'm an open book. It's just that by this point in the post, I'm typically ready to wrap it up and don't feel like going too deeply into my post production decisions.

Well, today, I decided to throw you a bone, an actual screenshot of the exposure tab for ACR. These are the actual factual numbers that I have chosen for the photograph herein.

Before I get into the whys of my exposure settings, let say that, damn, I may actually post this type of screenshot on a (somewhat) regular basis (don't get your hopes up).

I will try, I promise.

Now, let's work our way down from (almost) top to bottom, beginning with white balance. Straight out of camera I was somewhere around 5500K. Was it clean and accurate? Sure was but I was going for drama. Cranking the RAW file to a Cloudy setting was just the warmth and drama I needed.

The Brightness, at 13, was simply dialing in to a proper looking exposure on a global level.

Finally, the Clarity you see is pumped to 20. Again, I typically don't venture to this range but felt it worked for this particular photograph. My typical Clarity level? 5-7. Something made me want to get a bit extreme and I decided to go for it. Creativity is something you cannot quantify or qualify, just embrace. That's what I did here.

I think that about wraps it up. Before I do, I wanted to share with you the contact info to Philadelphia Poultry, in case you were a Philly based restaurateur and were in need of some chicken products.