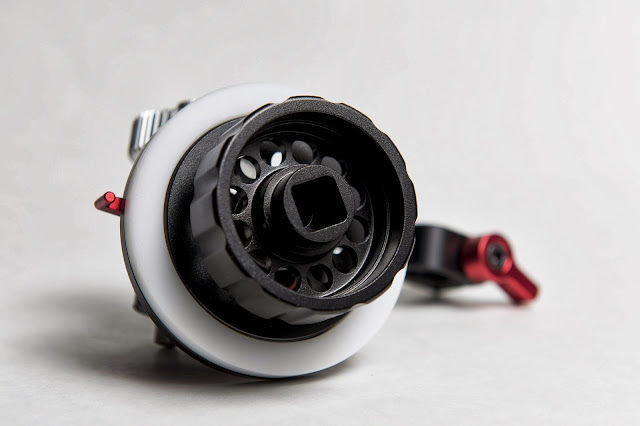 After almost one full year of ideas, scripting, meeting, revision after revision, the script is finally ready and shooting is to commence one week from today.

If you are not aware and many of you may not be, it was just about one year ago when I had a very deep moment, this overpowering urge to concept and create a short film. You can read about the epiphany [here].

Needless to say, the process, being new territory, the process and production, the steps leading up the actual shooting of the film, have been quite challenging and challenging is what I like.

Everyone has ideas but few actually execute.

It's those who execute who succeed.

I'm not sure if there is a designated author of these quotes and I wouldn't even call them quotes as there are so many variations of these powerful words. Regardless, they are words that I keep very close to my heart.

I'm not going to give you the teary eyed story today about this long and bumpy road that is the filmmaking process. I'll share that with you when filming and editing are complete.

Instead of taking you down that path, I wanted today to pay homage to the creator of all good and evil, the light of my life, the gear gods.

With technically less than one week until I yell "action," my mind has been nothing but obsessed with final pre-production odds and ends. With that, I decided to share with you a gear review, filmmaking related of course.

Before getting into the review and how I created the shot above, let me tell you I'm a huge advocate of "GEAR DOESN'T MATTER!" Although I stand by those words I cannot help but be seduced by image making products from time to time.

Ok, without further ado, the review and BTS info for that strange object you are viewing above.

What the f*@k is that object?!

What you are seeing is called in the film making industry, a FOLLOW FOCUS. A follow focus is a mechanism that attaches to a "rig" which in turn connects to the focus ring on the camera's lens. Often times, a 15mm rail system is the anchor for many follow focus systems. Other times, the follow focus can be attached directly to the camera. Either system allows for the DP (director of photography) or the 1st AC (first assistant cameraman) to "pull focus" with more ease and precision. Also, the follow focus reduces camera shake as whomever is "pulling focus" does not have to wrap their hands around the actual lens. With that in mind, you can also see how having a follow focus system keeps the DP's LOS (line of sight) free and clear. Finally, the follow focus is used to "rack focus," a technique used with shallow depth of field, drawing focus to various parts of a particular scene.

Ok, ok, so I know you want to see what the follow focus looks like when attached to the rig/camera, right? Fine. I didn't want to post this crappy cell phone image but it helps with the post. Damn it, I should have shot the entire rig as I wanted to. Should have went with my gut. I will be doing a proper shoot of the entire rig very soon, I promise. 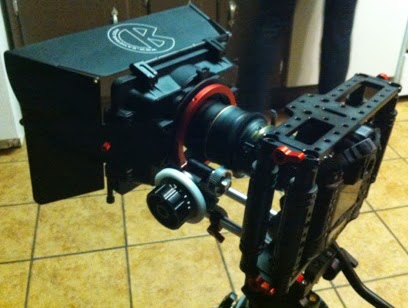 Here's the follow focus attached to my Kamerar rig that consists of the 15mm rail system, a cage and matte box.

I apologize for the low res image but here you get to see the actual rig I will be using to shoot the upcoming film.

Don't be fooled, that is actually my Nikon D4, simply pimped out with lots of new gear.

If you answered yes, awesome. If no, well, there are plenty of articles available via the old Google search.

Ok, on with the review. Shit, I can really get off track can't I? Focus Michael, focus. Ha, I said focus.

How did I come to choose the Kamerar FF-3 follow focus system? Good question.

For months I've been searching high and low for the proper rig/follow focus system to fit my needs. The factors I consider are quality, performance, build and last but not least, price.

The price range of follow focus systems is a bit insane. How insane? You can purchase the pimp daddy of follow focuses, the mac daddy, the OConnor CFF-1 for a low low price of $4500.00. No, I did not add an extra zero. You read right, four thousand five hundred dollars. Now, don't get me wrong. This is some high end precision, down to the nanometer type of shit. The Bentley of all follow focus systems.

Now, on the other end of the spectrum is the super uber duber affordable system. Unveil, the Ebay crap. Well, I don't know if it's crap but some of these $15.00 systems look as if they were bought at a dollar store and modified to fit a camera some way or another. I've seen these plastic Hong Kong built systems come in an array of neon colors. I swear it is true. Just image your DSLR with a metallic pink plastic rod protruding from your lens. Horrific if you ask me.

As for the rest of the brands, they fall somewhere in between the others and this makes choosing very very difficult. The RedRock, looks awesome but a bit steep, in the $800.00 range. The D-Focus, less but has lots of plastic parts.

After watching review after review, I stumbled upon Kamerar, an American company. Seems as if they are new in the film gear product line as their prices are nice and their line, limited. I felt their newness immediately.

Sound too good to be true? I thought so too. At the time I was torn between the Kamerar and the Fotga dp500 ii. The Fotga had hard stops and dual rail mounting, all aluminum system. The Kamerar a single rail system, also no plastic parts, with no hard stops. Prices were very comparable. Why did I choose Kamerar? Made in the U.S.A. baby!!! Look, I'm a fan of some imports but when it comes to good deals and China or Hong Kong, I've been burned. It was a no brainer, Kamerar wins.

My wife has been driven crazy by how many unboxings I've watched over the years. Some more hilarious than the next. I do have to admit, there was one unboxing of the Kamerar system that had us both laughing hysterically. The guy was obviously from the south with his strong accent and he was super excited about each product and how well each was built. When it came time to open the follow focus, this guy seemed as if he was about to have an orgasm. I shit you not. I won't post the link as not to try to embarrass the fellow. Funny or not, he was actually a big deciding factor in helping my decide to invest in the Kamerar system.

The man's orgasmic review was spot on. When I pulled that follow focus out of it's well packed box,  I was beyond pleased. This baby weighs in just over a pound and is worth every single penny. There is not a cheaply made part whatsoever. When I say zero plastic, I mean zero plastic. There is also a white, magnetic, marking ring so that you may set your marks with a dry erase marker. To wash, simply pull the ring off, wipe and replace.

The wheel is big and I have big hands. For me this means better ergonomics than many others. A small follow focus would be hell on my ham hock hands.

There are various sized hex screws but fear not, the appropriate Allen wrenches come packed with this awesome system. With those you can adjust how the wheel sits on the rail, the tightness of the wheel to reduce backlash, or to open the mechanism itself.

The gear is interchangeable if you want to go south paw or work with shorter glass. Saawweeeet.

I can go on and on. Let's move on to performance.

Also packed with this system is the gear belt. This adjustable rubber ring attaches to the focus ring of the lens. Once attached, you can then attach the follow focus, allowing the gears to perfectly intertwine with each other making for a perfectly smooth focus pull.

Many feel that the single rail attachment is a downside to many systems. I totally disagree. First of all, the system locks down on that 15mm rail with no problems. I've tried to beat it up a bit and that follow focus will not budge. Also, I decided on the single rail system due to my camera body. I use a professional sized DSLR. The consumer sized bodies are much smaller and fit more comfortably with the dual rail systems. I even went as far as to email Fotga about proper fit with a pro body. No response. The Kamerar, being single rail and with its infinite positioning adjustment capabilities, it is just a no brainer. How does she fit? Snug as a bug in a rug.

Did I hear someone say backlash? Not here baby. Sure, with hours and hours of usage, the wheel loosens up a bit but no worries as this can be quickly remedied with a quick turn of an Allen key. Once tightened, zero backlash baby, zero!

Did I mention how smooth that baby turns? Butter I tell ya' butter.

Oh yeah, on last little thing. I like the red accents. It matches my Nikon. Just sayin'.

As usual, I went way too long here. It's a problem I'm really trying to work on. I swear. By this point nobody wants to hear my nerdy lighting talk. Well, maybe a few die hards but I'm sure I've lost some eyeballs by this point.

Hey Arnold! You still with me? (inside joke)

Ok, quick, down and dirty of how I shot this one, the first image of course, not the shitty cell phone shot.

I placed the beautiful follow focus on a piece of white poster board which I had lying flat and curving upwards in the back to give the viewer the cyclorama/infinity feel.

For light, I chose to shoot a single Vivitar 285HV into a 60 inch convertible brolly. I positioned the brolly directly overhead. Think: carrying umbrella in the rain. Yep, straight overhead. well straight over follow focus for that matter. Positioned 90 degrees to the floor, the brolly was then placed slightly camera right, with only a portion of the brolly hanging over the subject matter.

Post production? I was dialed in pretty damn close in camera. Post production was simply a few ACR adjusts; contrast, sharpening, lens correction. Beyond that, zero my friends. I even left the slightly dirty poster board without any edits. Lesson? Get it right in camera! Keep processing to a minimum. Even with the slightly no-longer-white-paper, I was able to get a great product shot.

Did I just pat myself on the back?