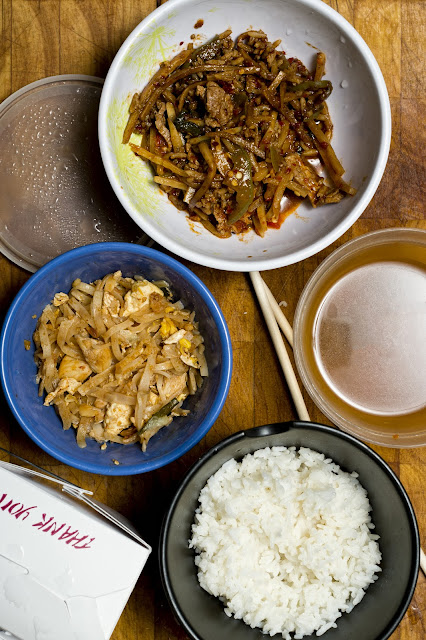 I was like a fat kid in a candy store. The day was filled with culinary creations that made my belly very happy. My taste buds were treated with lots of love, from American to Thai cuisine, from Philadelphia traditions to exotic dishes from the far east.

Today, I will share with you my journey, one day of searching for that perfect meal to photograph. It was just me, my camera and a large cup of coffee. Sometimes getting raw, stripping down to some bare minimums, can take you to a unobscured place of inner creativeness. What the hell does that mean? I have no fucking idea but it sure felt smooth coming out. Sometimes my fingers type things that come from some strange and unknown places.

Seriously though, it is rewarding in many ways to simply grab one camera, one lens and hit the road, not worrying about where you may end up. The only concern is that you end up that day with something interesting, something beautiful, something to share with the world; your photography.

The morning began at 7:30 when my alarm beckoned me from the big comfy bed. I quickly showered, brushed my teeth, dressed, threw on a coat, a hat and scarf, grabbed my camera and headed out for the day's adventure.

The Xterra was parked just a block from my digs, a rare phenomenon. Typically, where I reside in Rittenhouse Square, parking is a big pain in my ass. Finding a spot the night before, so close to home, is typically worth brining up in conversation over dinner. To some degree, even worth celebrating. Yep, it can be that difficult.

I warmed up the SUV while listening to the lighter side of 88.5 WXPN. After about a minute or so, I hit the road. Leaving the spot on 19th and Addison, I took a right turn at Lombard and headed towards I-76, westbound. My heading? The fine town of Conshohocken, not a far ride from the city. The ride began without incident, that was until I came up on the Gladwyne exit. The right lane was closed due to some, well, whatever it was. I don't recall paying much attention to why it was closed as it really didn't make a difference. For whatever reason it was closed, it would cause lots traffic and make me tense and angry.

Trying to calm myself, I grabbed hold of Betsy (my camera) and caressed her, kissed her and... Ok, that was a bit much. In actuality, I simply took Betsy and gave a quick wipe down of the business end of the 24-70. I quickly formatted the XQD and CF cards. Finally, with the lack of movement, I grabbed my iPhone to find on the maps, where it was I was actually going.

A minute or so later, traffic began to move. I turned up the radio, sat back and cruised on to Conshy.

I was looking for a spot called Donnie Mac's Deli on 4th. There I was to meet good friend Dave Ellis for breakfast. By 8:45 I had parked, grabbed my camera and headed for the corner deli.

Entering, it was not what I really had in mind. There were about three small tables in the entire joint. Not a lot of seating for the clientele. Upon further inspection, I notice a couple of counter tops that patrons could also sit or stand at to enjoy their grub.

I immediately noticed Dave already eating his bagel with lox and cream cheese. I order two eggs, over easy, with a side of scrapple and pour myself a large black coffee.

The food came out probably in less than five minutes. No frills either. A disposable plastic plate, fork and knife. Hey, I'm no judge. As long as the food is good, I don't care if they served it on toilet paper, although the TP would quickly fall apart and stick to my delicious scrapple.

We spent about almost two hours, just enjoying good conversation on a Saturday morning. It was awesome.

After parting ways and hitting the road again, I headed back towards the city. Along the way I took some detours to search for potential photo shoot locations. When I have free time, I love to do this. I  take random routes, random turns, taking in every visual aspect of the surroundings, deciding if they could make for decent shooting locations.

I'm back home by about 3:00. By this time, I'm a bit exhausted. Once home, I work on catching up on emails. For some reason, I get a spike in emails from Friday into Saturday. Not sure if there's any rhyme or reason but it just happens that way. Maybe like drunk dialing, people are drunk emailing me. Hey, I've been guilty of intoxicated internet interactions, I know how it is. Let me just say, stay away from Facebook when you've had a few. It is a dangerous trap, trust me. You know how people on LSD get stuck in the bathroom, staring at their faces in the mirror. Well, drinking and Facebook are somewhat synonymous. You'll get stuck. Worse, you'll likely post some comments that you'll likely regret in the morning. I digress.

After emails are wrapped, I think about shooting. As you all know, I've been working with food lately. I've been working on keeping my portfolio in line with the two things I adore, food and people. Furthermore, I'm working on connecting those two. More on that later. So, I was thinking of a new dish to shoot, a new cuisine.

It was getting late and time to decide on dinner. The wife and I were both pretty exhausted and knew it would be an evening for takeout. Oh, but what to have? After about ten or fifteen minutes of debate, we finally decided on Thai. Our favorite Thai restaurant, for delivery that is, is Erawan. Erawan is located on 23rd St., just below Sansom. As far as Thai goes, their food is amazing!

The food arrived at about 9:15 that evening. I became nervous as I know what I ordered and how spicy it can be. Why? Because I order it that way. Without further ado, let's discuss the meal as seen in the photograph, one by one, going clockwise, beginning at the bottom:

Here's what wen down.

The Thai Sausage is an appetizer that we both share, it's effing awesome. Not like any sausage you've ever had, especially with the ginger and Thai hot sauce. Very unique.

The Crab Pad Thai was the wife's. I'm not a big crab fan so I cannot discuss this dish.

The white rice, as mentioned, nothing to discuss. If you need me to explain what how the rice tasted, you may have some problems.

Now, onto my two main courses. the Enlightened Bamboo and the Seaweed Tofu Soup. Thai food, on a regular basis, is known to be somewhat spicy. Me, having to go to extremes, had to push the spice envelope.

Both dishes of mine were volcanic hot.

The soup is very deceiving, in regards to the heat. When I fill the spoon with a piece of tofu and seaweed, both in the light broth, I can't imagine how hot it can be. When I put the combination of ingredients in my mouth, I think, with the super light taste, that they forgot to add the volcanic heat.

In about five seconds I realize they did not forget.

By ten seconds, my mouth, my lips, my tongue, my cheeks, my nose, my eyes, just about everything above my neck becomes engulfed with fire. Nothing cures this intense heat. Nothing. Milk you say? I say bullshit.

After a few minutes the heat subsides and you know what? I went in for more. Masochistic in some ways I suppose.

As for the Enlightened Bamboo. Same story only the added ingredients help to calm the heat, just barely.

Regardless of the extreme pain that was involved with the simple task of eating, the food was outstanding. I freaking love Erawan's food. I've been a patron of theirs, probably for a decade now. I hope they stay in business for many years to come. I don't see why they wouldn't, they put out a magnificent product. Not much more needed for success these days.

Shall I now discuss the photograph? I really wanted to wrap up there but I suppose I must explain the photograph. It's why were here right? Damn it. Fine. Here we go. 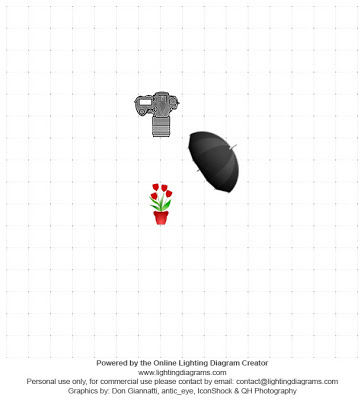 I began by plating the food. Everything was in their plastic togo containers and I decided some colored bowls would add some interest. In hindsight, I think the togo containers may have been cool. Not all lost though, the soup is left in its original container and the bottom left has the traditional Asian togo box. That was the white rice holder.

I placed the dishes, and a set of chopsticks, on a large chopping block. I then carried the entire setup to a location slightly below waist level. I wanted it low since I planned on shooting down over the food, hand held. The low position would make for less cumbersome shooting.

I then set up the light. For this I chose to work with a 60 inch umbrella. I really wanted to pull out the Photek but didn't want to spend lots of time setting up.

Strobe of choice that would be firing into the large brolly was a Vivitar 285hv firing at 1/2 power to get f/8.0. I really wanted everything to be tack sharp with a pretty wide DOF so I felt that f/8.0 would be the sweet spot. To dial in this exposure I went with a shutter sync of 1/250 and ISO 200.

For glass, I decided to work with the 50 1.4. For food I usually opt for the 24-70 since I can focus a little closer but for this setup I knew I wouldn't be able to get super tight. Focus wouldn't be an issue.

From beginning to end, I probably shot for less than five minutes. Look, once you know you have the shot, it doesn't make a whole lotta sense to shoot for nothing unless you aren't 100% confident that you nailed it. I felt I had the money frame less than ten shots in but did shoot a little while longer to see if I was missing anything, an angle, something. Shooting a safety net of sorts.

Post production? Not a whole hell of a lot. I had to crop in a bit, work some color corrections and tweak the exposure settings in ACR but not really much more. I really really really try to nail it as close as possible, in camera, these days.

Well my peeps, I've had enough. As they say on the west side, east side or both, I gots to go.